Levada Fajã do Rodrigues is located in the northern part of the island in São Vicente. This lush jungle trail takes you to the levada’s origin in the canyon of Ribeira do Inferno. Along the way of this 8 kilometre hike you will have panoramic views over the valley of São Vicente. But the weather can change quickly here, so be prepared for every weather circumstance. Levada Faja do Rodrigues involves some tunnels so a flashlight is necessary. Overall this trail is easy, well maintained and a fun levada walk where you can explore some beautiful waterfalls along the way. Read here everything you need to know about Levada Faja do Rodrigues!

Before setting off to the Levada Faja do Rodrigues, below some key facts!

Hike distance and duration: Levada Faja do Rodrigues is an out and back trail which means you’ll walk the same way back to the parking. The total distance is 8 kilometres, so about 4 km each way. Because there is no incline during this hike you can maintain a quite fast walking pace. However the total duration of the Faja do Rodrigues hike depends on the stops you make and the time you take to explore the waterfalls in the canyon. It took us about 3 hours including taking photos and exploring the waterfalls. If you’re only on the trail to hike, you can easily finish the complete levada walk in less than two hours.

Hike difficulty and incline: With well-maintained levada paths and only 95 meters of incline, the Faja do Rodrigues hike is quite easy. However officially this levada trail is classified as “moderately difficult” and it’s not the incline that makes it like that. The most difficult part of Levada Fajã do Rodrigues are its tunnels. The first two tunnels are short and easy. But the last one is about a kilometre long and takes approximately 20-25 minutes to cross. Especially for tall people it’s not very comfortable to walk through these tunnels. You’ll have to bend over all the time, and the tunnel is super narrow. You can choose to walk in the levada so you won’t have to bend over all the time, but then be prepared for very, very cold and wet feet! 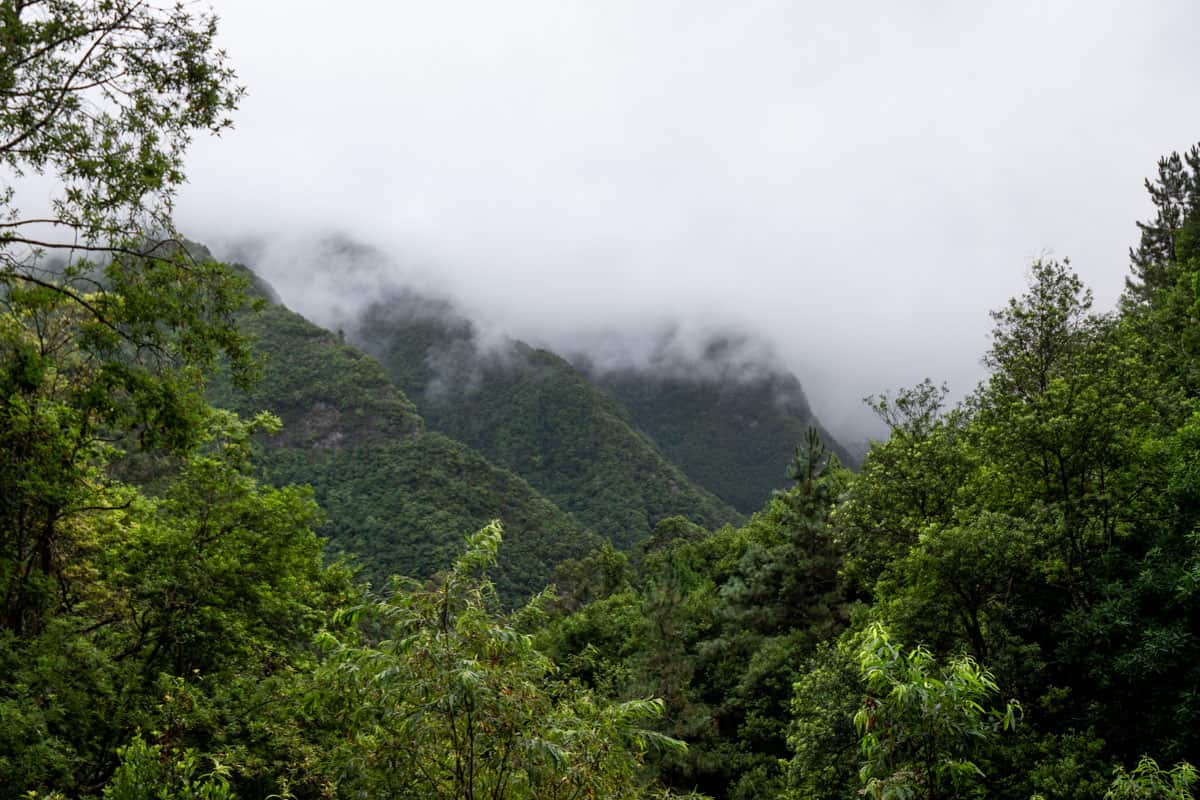 How to get to the Levada Faja do Rodrigues

The Levada Faja do Rodrigues starts at Ginjas which is located in São Vicente on the northern part of the island. From Funchal it will take you about 35 minutes to get there and you’ll drive through the beautiful Ribeira Brava valley.

The address of the levada is Caminho Velho das Ginjas in São Vicente. But you can also find the starting point by putting in the name of the levada in Google Maps. There is no public bus going directly to the beginning of the levada so you will definitely need a rental car. At the trailhead is enough parking space and you’ll quickly see the first signs directing you to the start of the trailhead. You’ll know soon enough where the official levada starts when you see the white information board that can be found at every official levada. 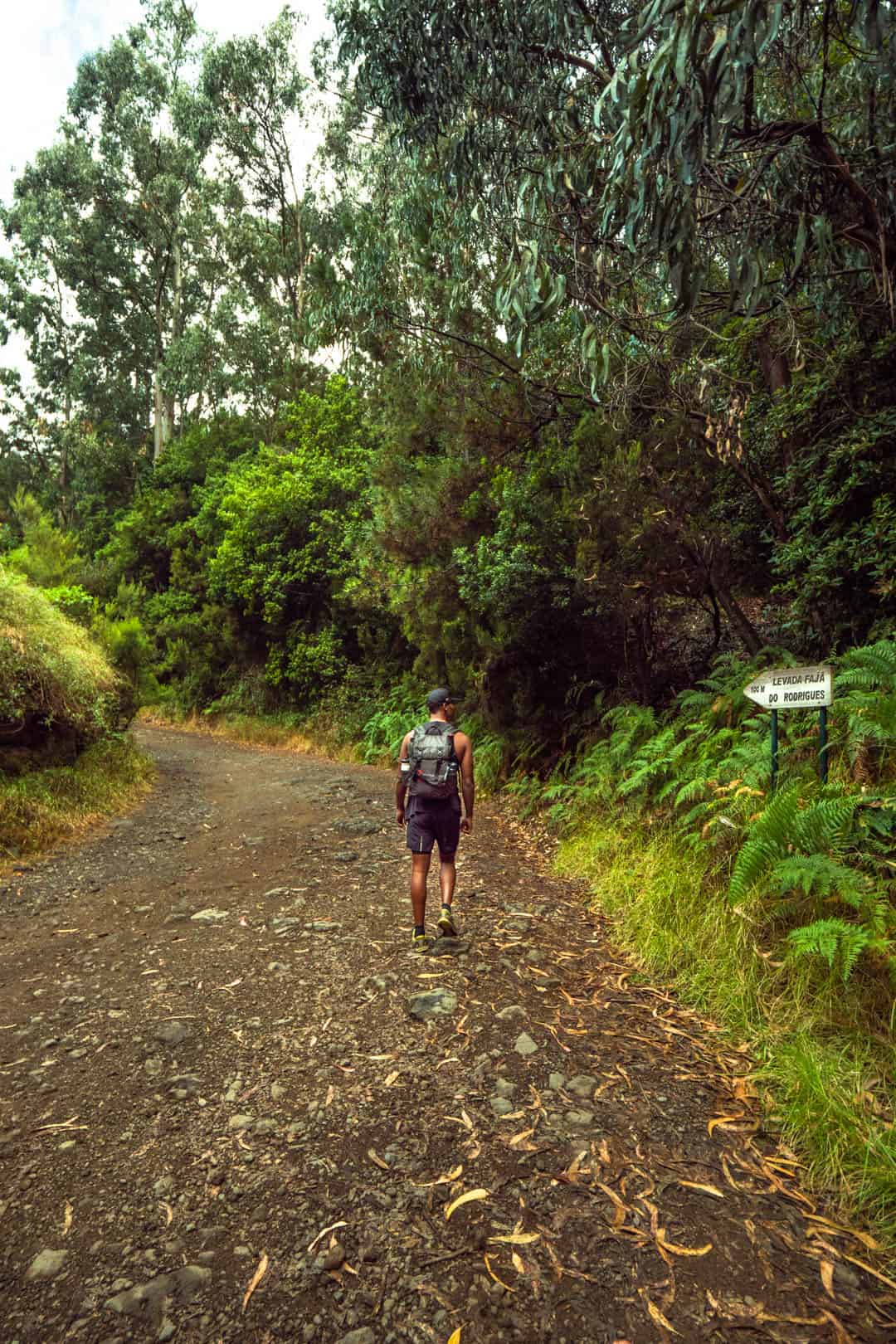 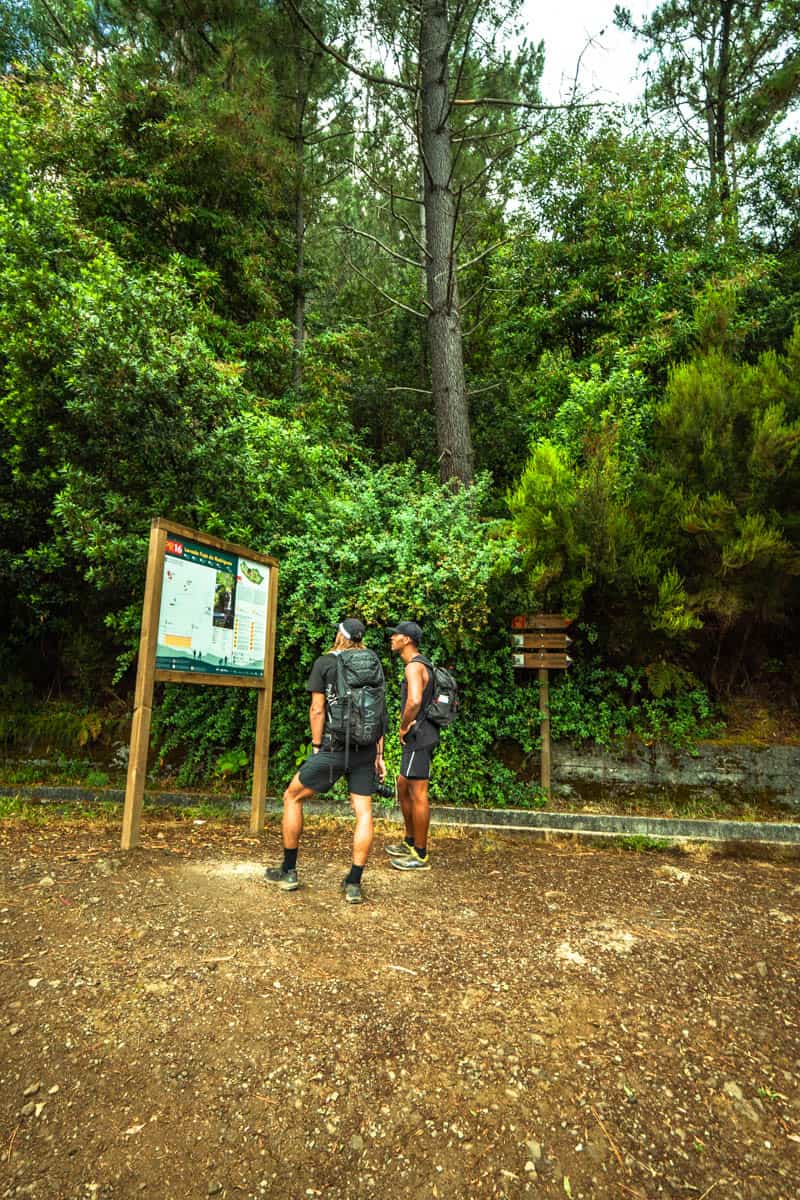 Best time to do the Levada Faja do Rodrigues

The weather along the northern part of Madeira island can be very different from what you’re experiencing on the Southern coast of the island. So make sure to check the webcam or weather forecast on the north upfront. If you’ve made it to the starting point of Levada Faja do Rodrigues but it looks very moody, then don’t get discouraged. The weather changes quickly and clouds can disappear in 10 minutes. We started the hike with lots of grey clouds and moody weather. But on our way back the clouds were disappeared and we had wonderful views on the São Vicente valley. Because this is not a popular hike, you won’t have to start too early to avoid the crowds in comparison with Levada das 25 Fontes for example. 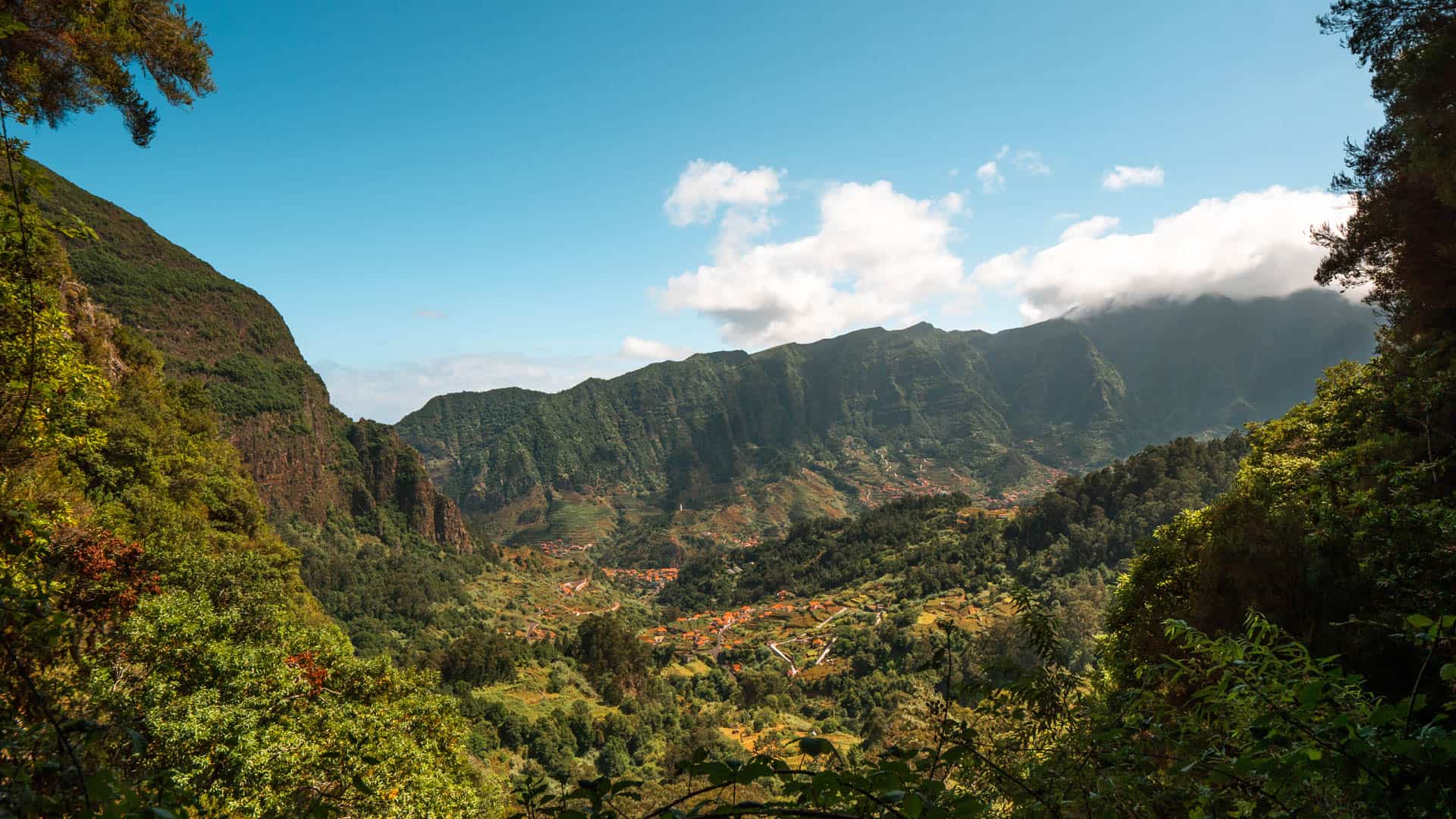 What to expect during the Levada Faja do Rodrigues

Once we parked the car it was clear where we had to go by following the signs. The beginning of Levada Faja do Rodrigues is easy and similar to other levadas on Madeira Island. The flat hike takes you slowly deeper into the forest which at some point almost feels like a jungle with the beautiful lush ferns and many different trees. 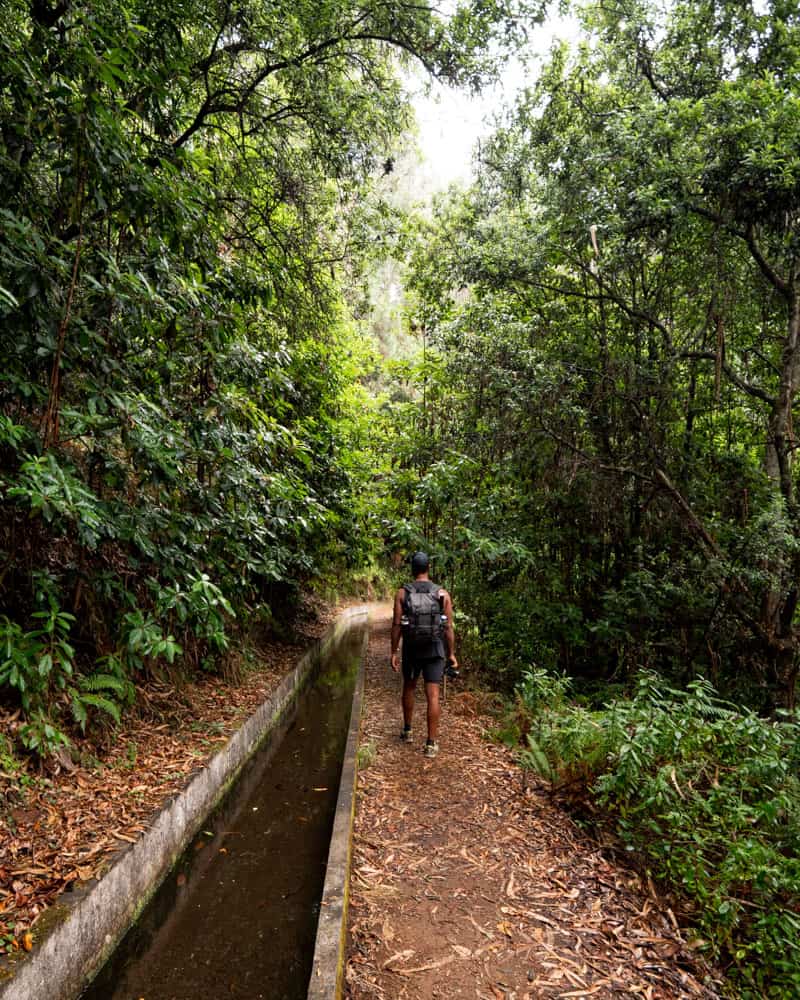 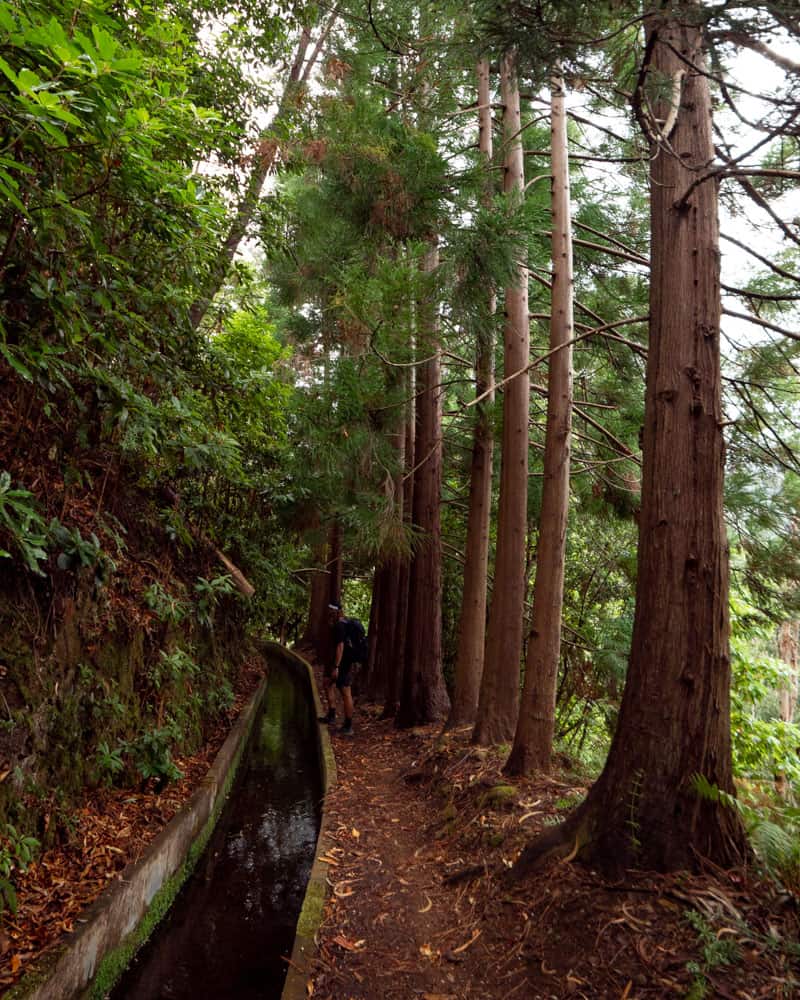 The further you go the greener and prettier it gets during this levada walk. After a few hundred meters into the trail you’ll see the first waterfall. It’s actually a man made cascade and part of the Levada system, but worth it to take in for a moment. 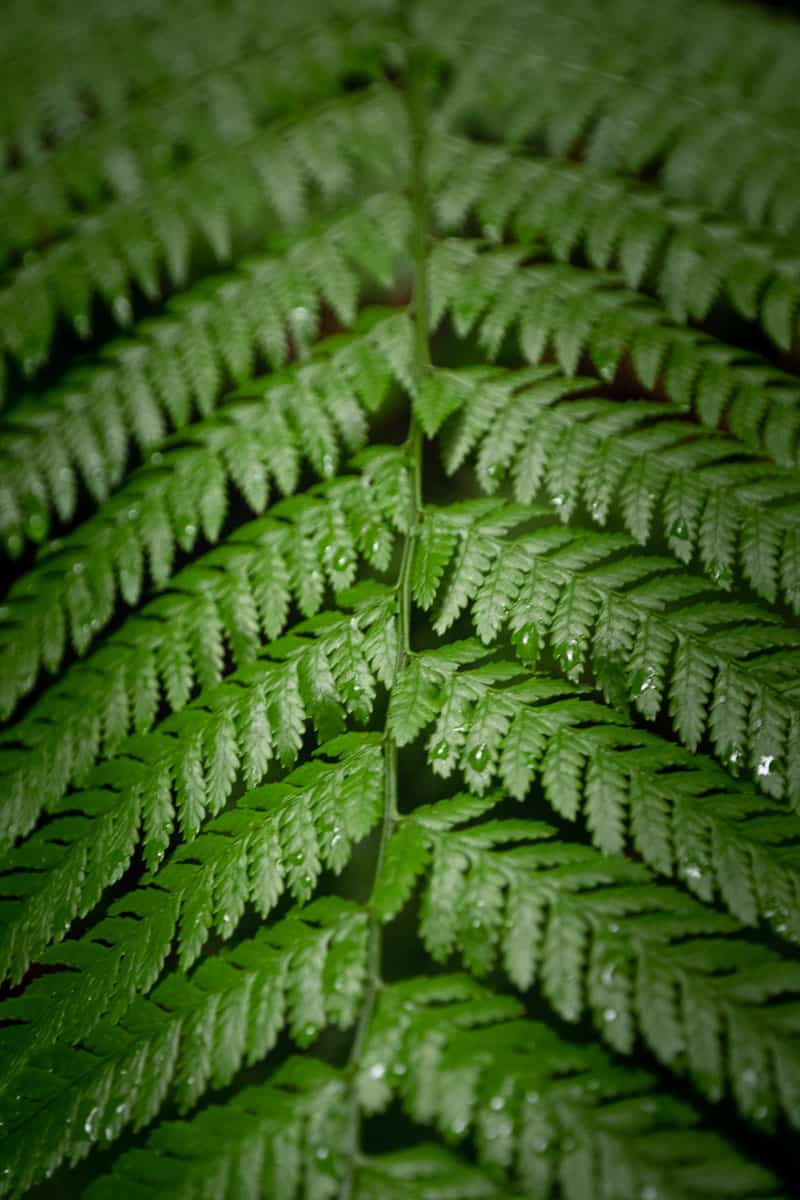 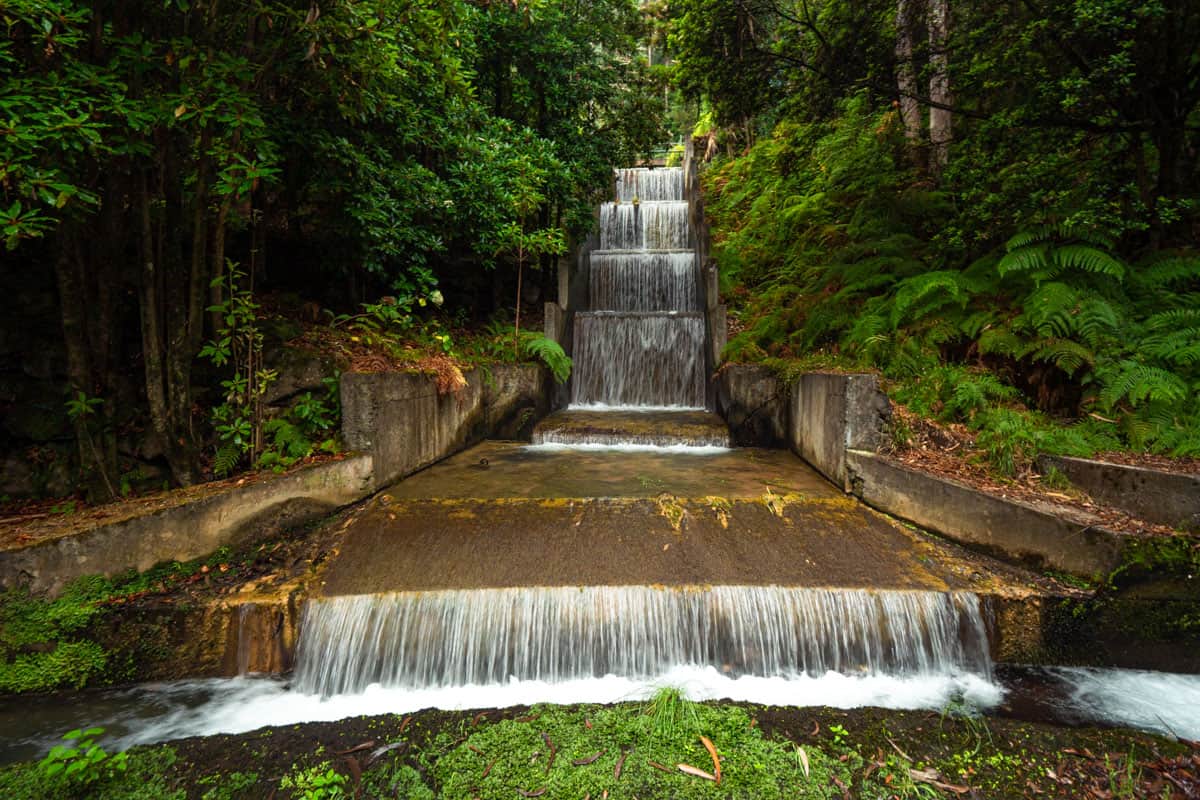 Keep your eyes out to spot the typical Madeiran chaffinch (Fringilla coelebs maderensis) and Madeiran Firecrest (Rugulus ignicapillus maderensis). You might be lucky to see them! If not on this levada walk, then definitely go to Balcoes viewpoint which is famous for the Madeiran chaffinch that wants to eat bird seeds out of your hand!

Along the trail of levada Faja do Rodrigues you’ll see many beautiful wild flowers and several others sorts of plants and flowers. Keep your eyes open for all these beautiful details along the hike. 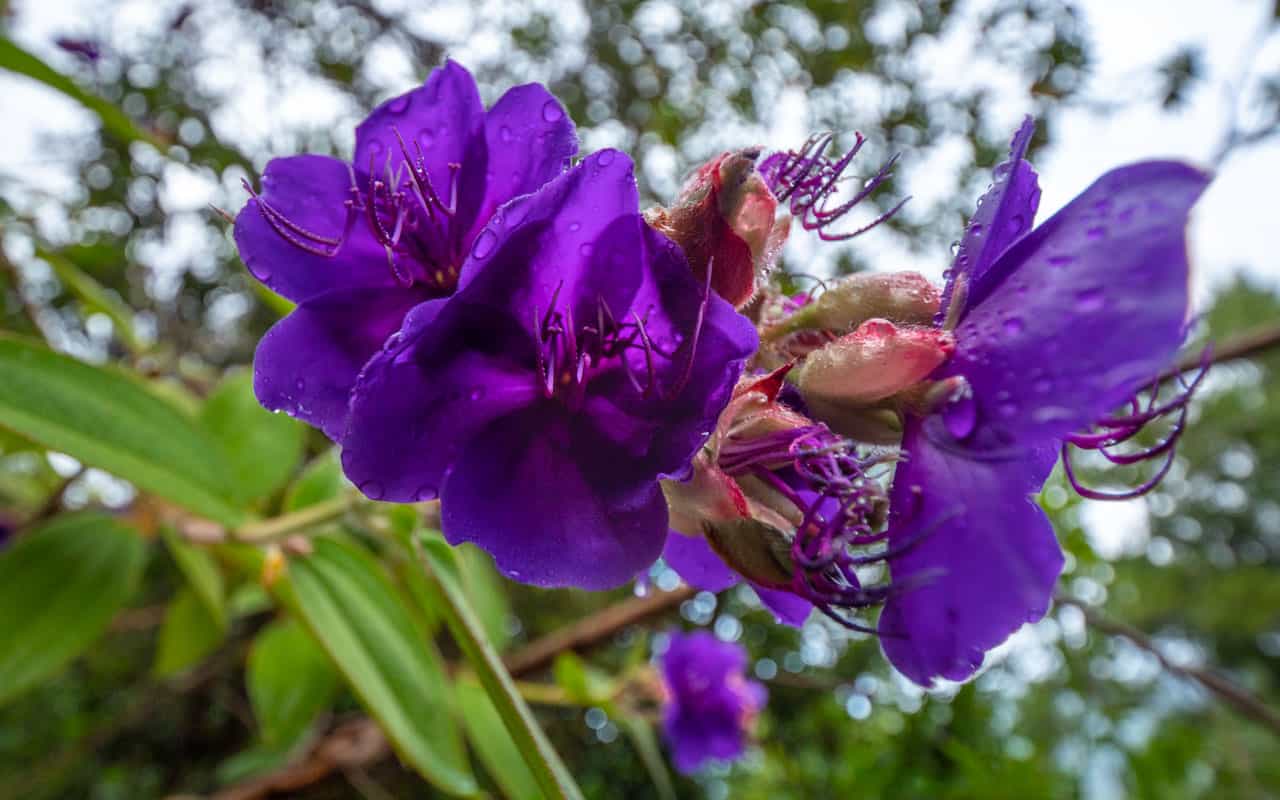 You’ll walk along the levada and mountain ridge for some time before you dive deeper into the forest and into the tunnels. At some point you will walk underneath a, what looks like waterfall stream. When we did the hike in August the waterfall might have dried up. But I can imagine that after some rainfall there could be a pretty nice waterfall flowing here! 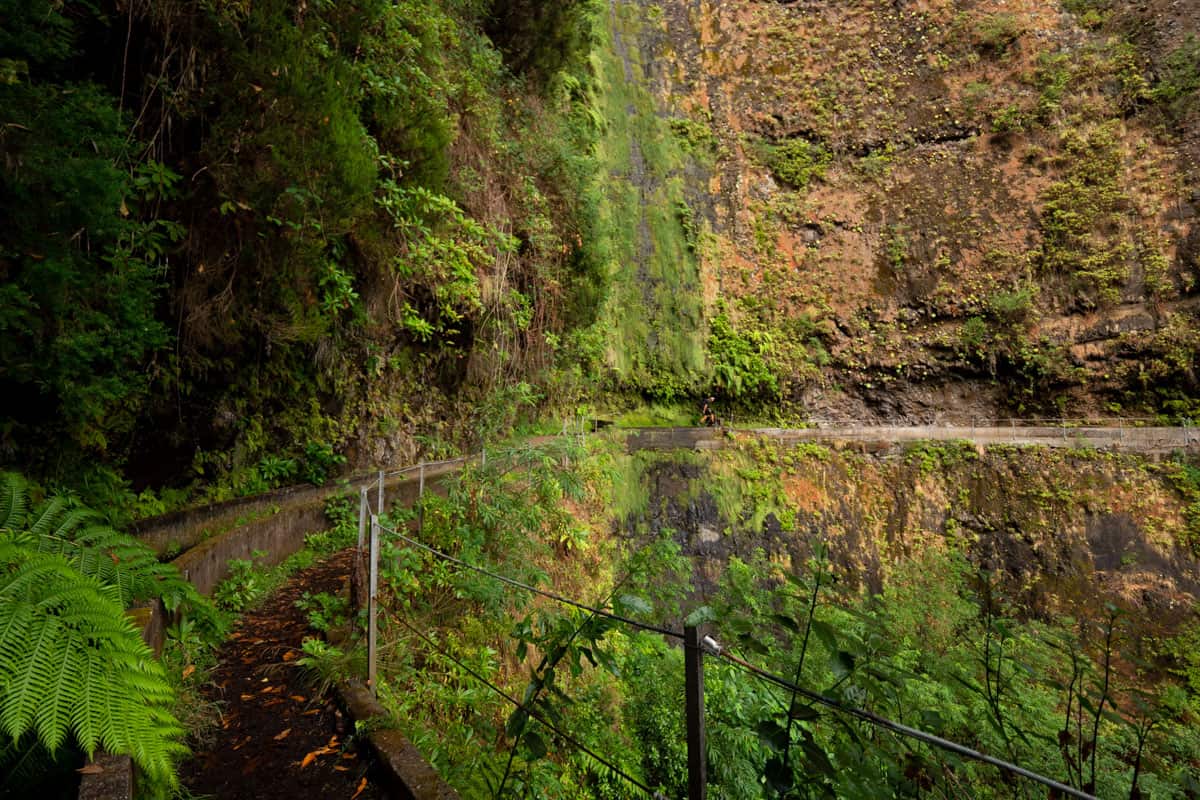 The Levada Faja do Rodrigues tunnels

There are multiple tunnels throughout the hike from which a few are short, but the two long ones are about 1 kilometre in distance and very narrow. You’ll definitely need a headlamp for those! After about two kilometres you will reach the long and narrow tunnel. Grab your headlamp or flashlight and get ready to walk leaned forward for a kilometre. I would suggest to use a headlamp so you’ll have your hands free to stay in balance. There are very narrow parts in this tunnel so together with leaning forward you’ll also have to lean sideways at some points.

Protect your head because the tunnel is seriously low and a head bump happens in a split second if you don’t pay attention. Unfortunately I say this from my own experience, and it seriously hurts a lot to bumb your head on these rocks. It didn’t feel like I had a concussion, but it hurts so bad.. So wear a hat or cap to protect your head, or just be sure to stay as low as possible. 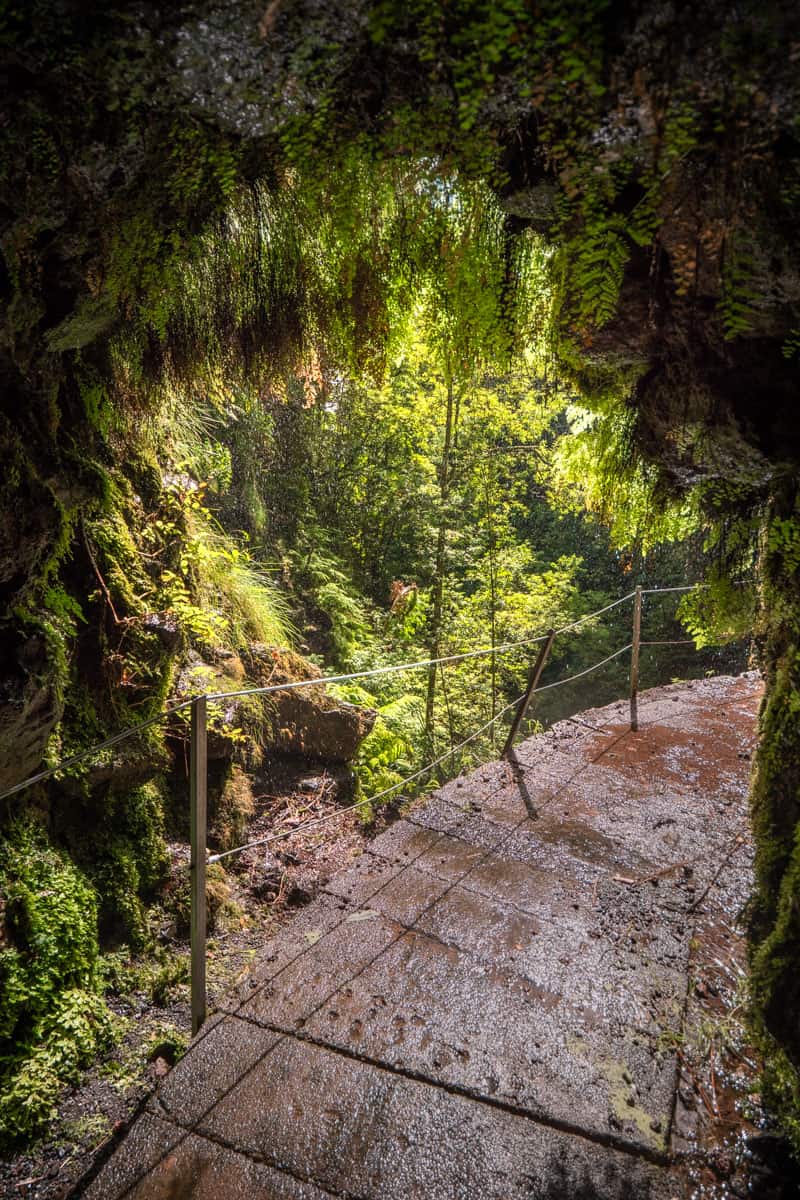 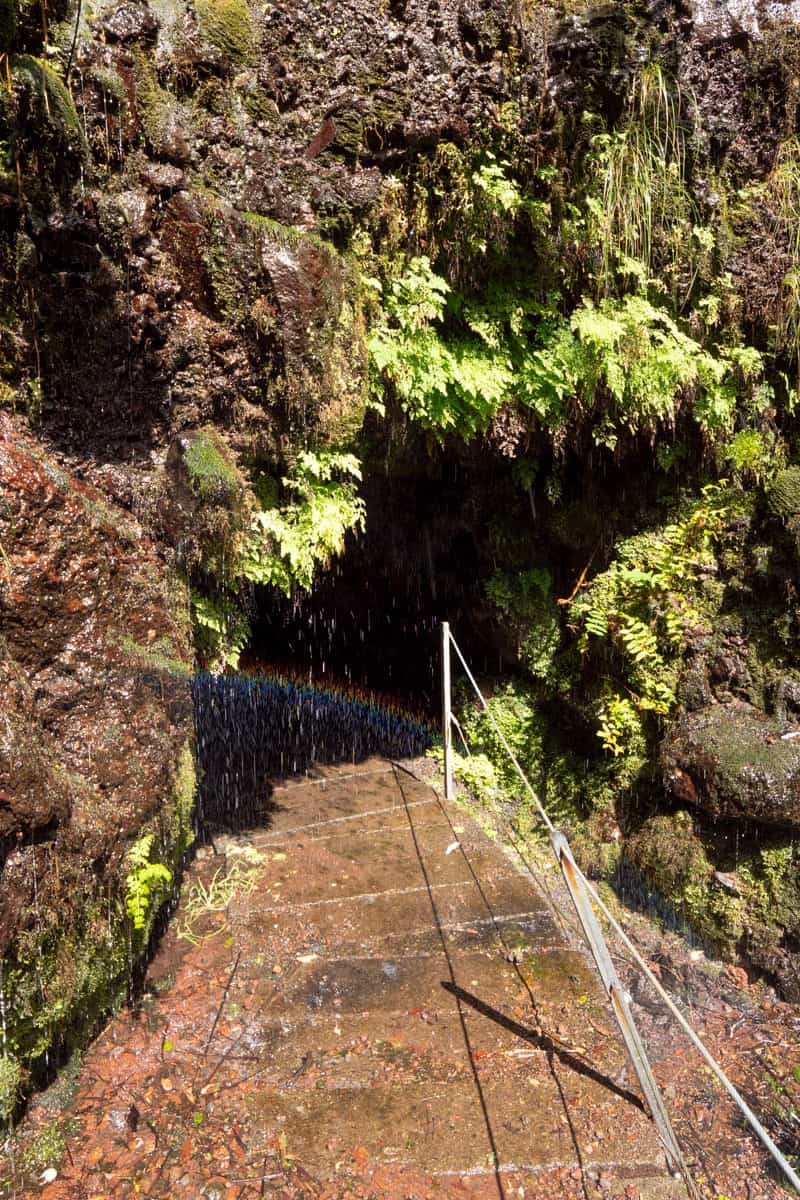 The Levada Faja do Rodrigues waterfalls

After about the first three kilometers into the trail and closely towards the end of the canyon, you will reach the first waterfalls. From behind the safety railing of the levada you can look down into the canyon to spot two stunning waterfalls. The main waterfall consists of two streams that come together and pours down into a small crystal clear pool below. 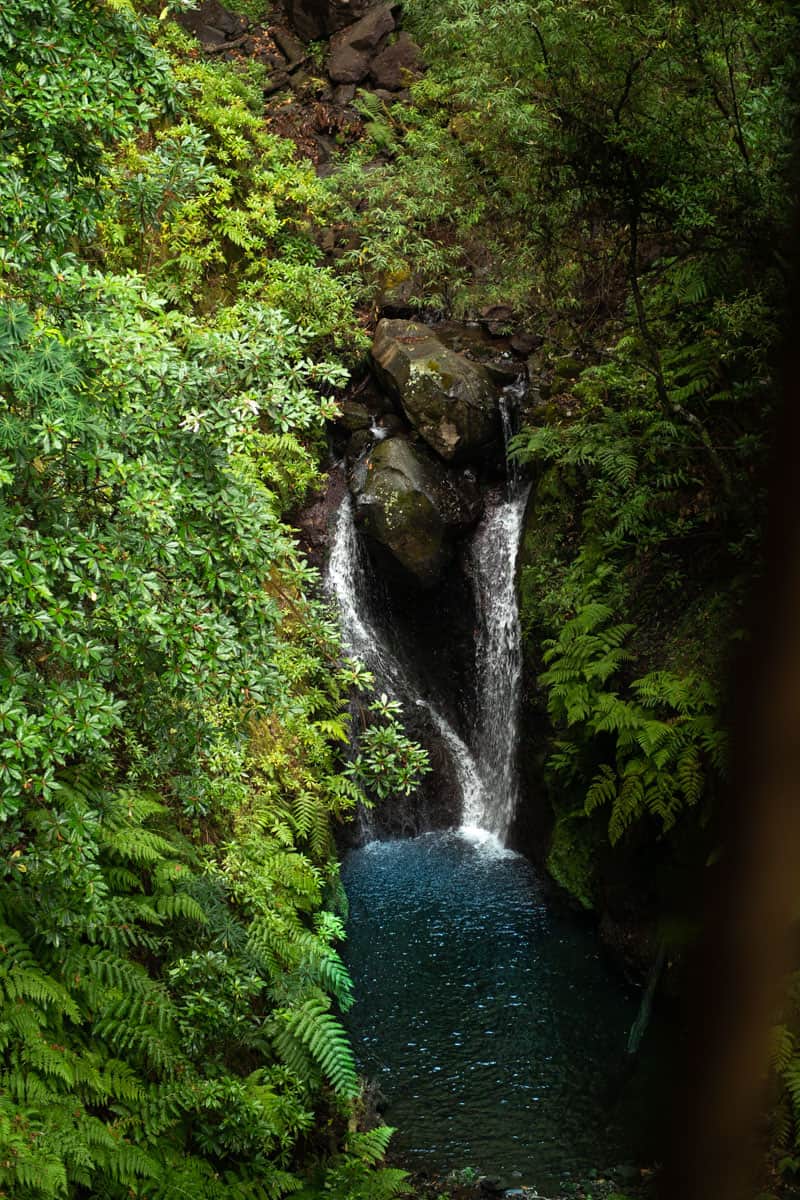 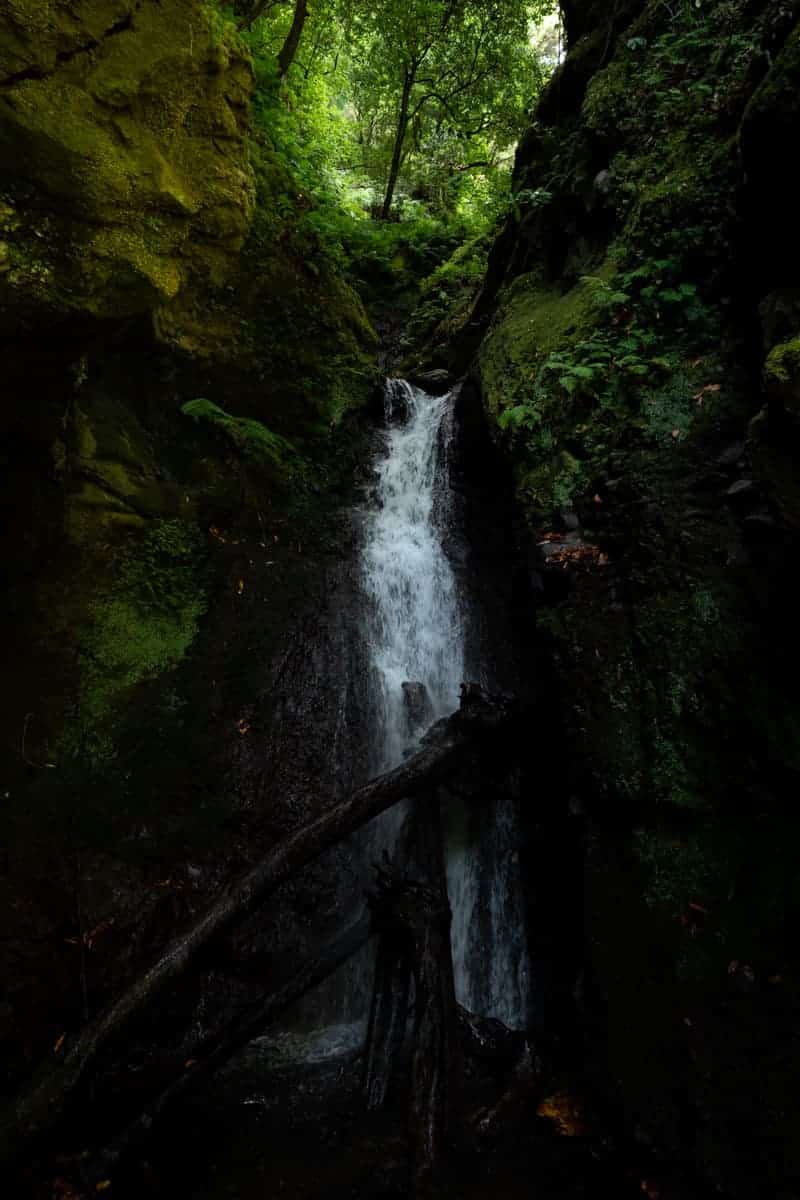 Get ready to dive into the long 1 kilometre tunnel after this beautiful scene. It’s a real adventure, but you will be rewarded for the effort with amazing jungle like scenery. When you’ve made it to the other side of the tunnel there are only a few hundred meters left of the trail. But these last few hundred meters of the Levada Faja do Rodrigues are definitely the lushest and most jungle like part of the hike. The beautiful green forest in combination with several small waterfalls that drip down mossy rocks makes it almost a fairytale like scene. 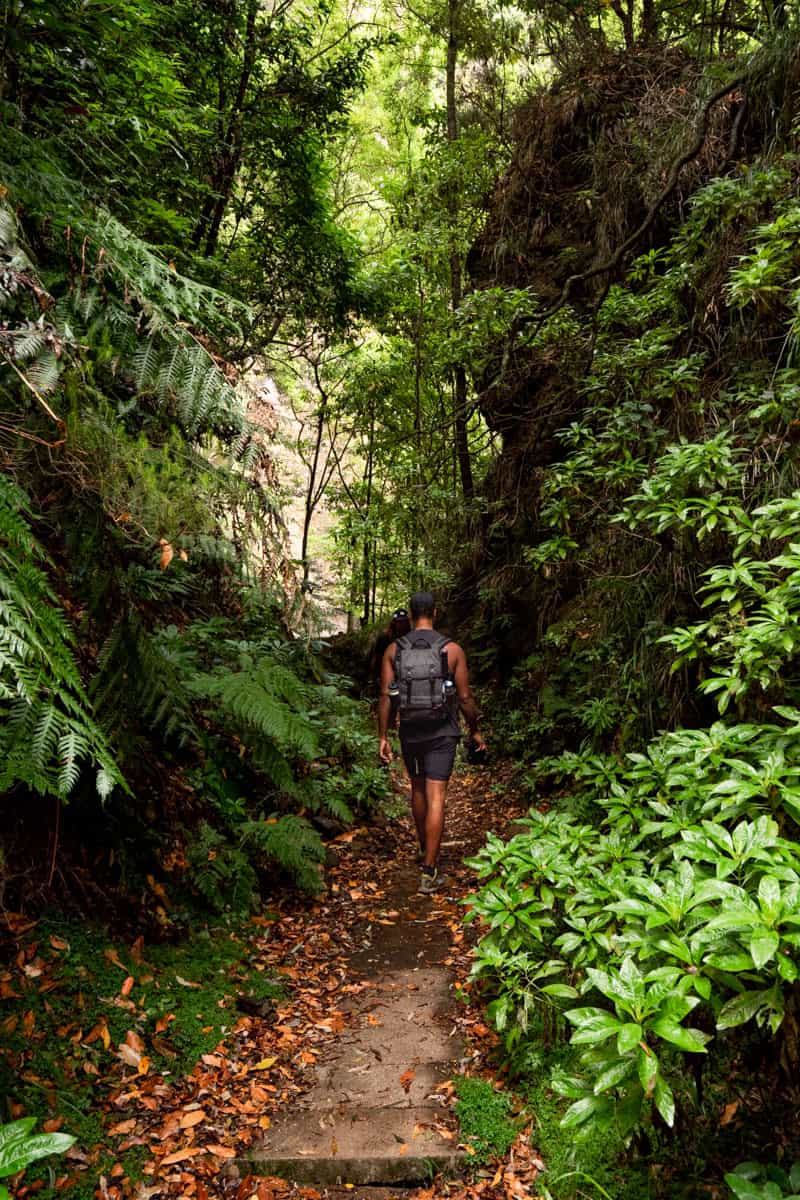 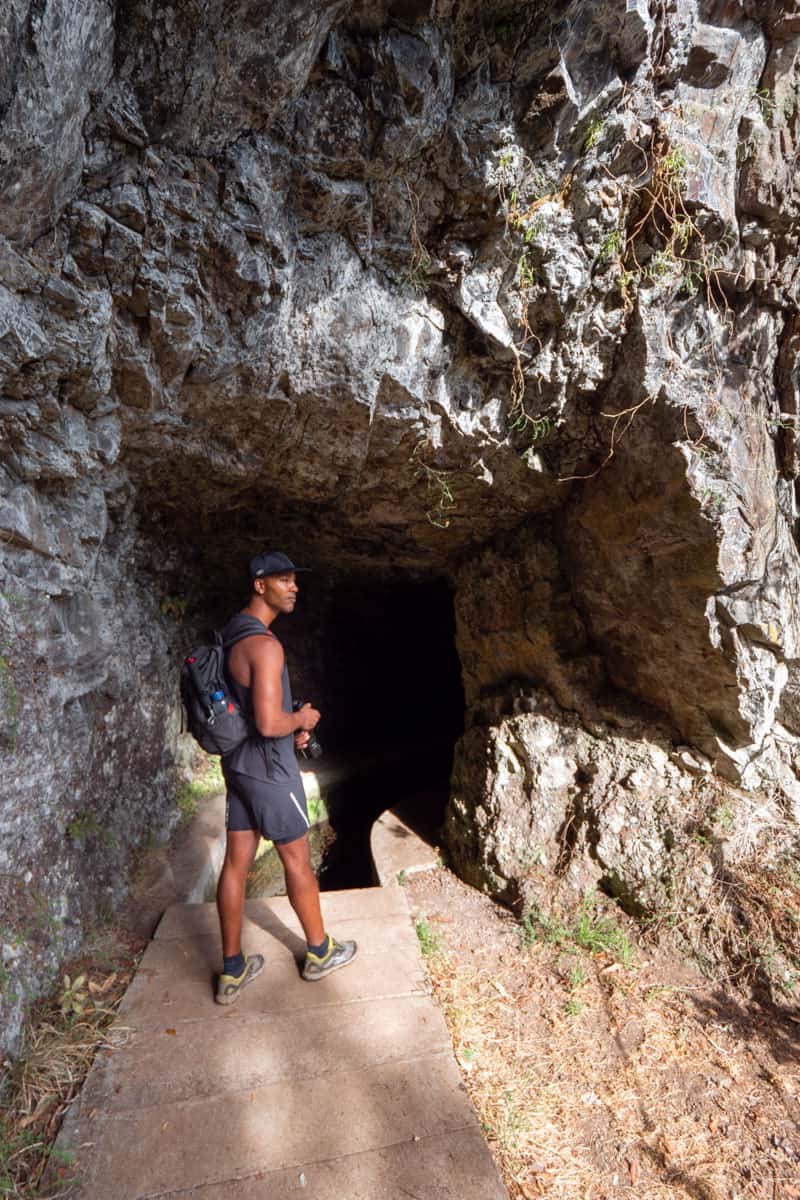 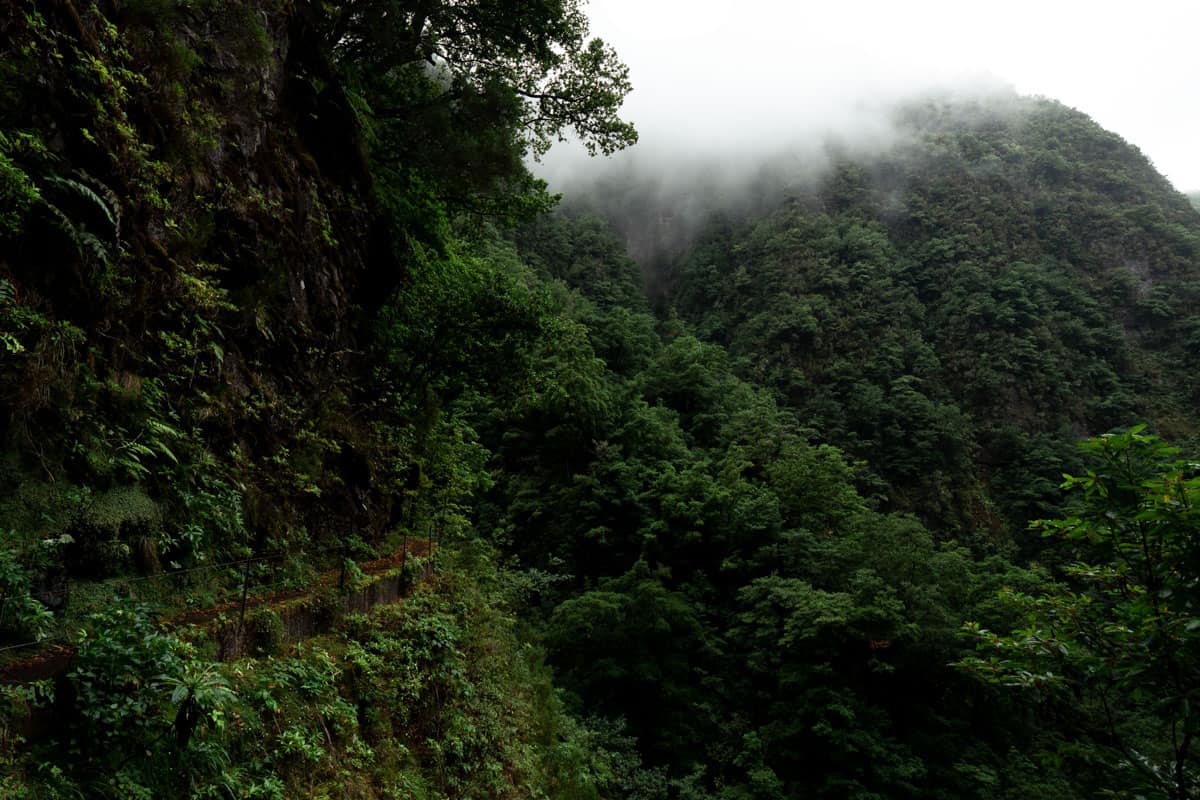 Then suddenly the trail ends quite abrupt when you hit the 4 kilometre mark. Here you are in the canyon of this levada with a beautiful small waterfall to enjoy. You can explore around in this canyon, but the rocks might be slippery. Always take care when walking around on stones and rocks because a slip is quickly made. 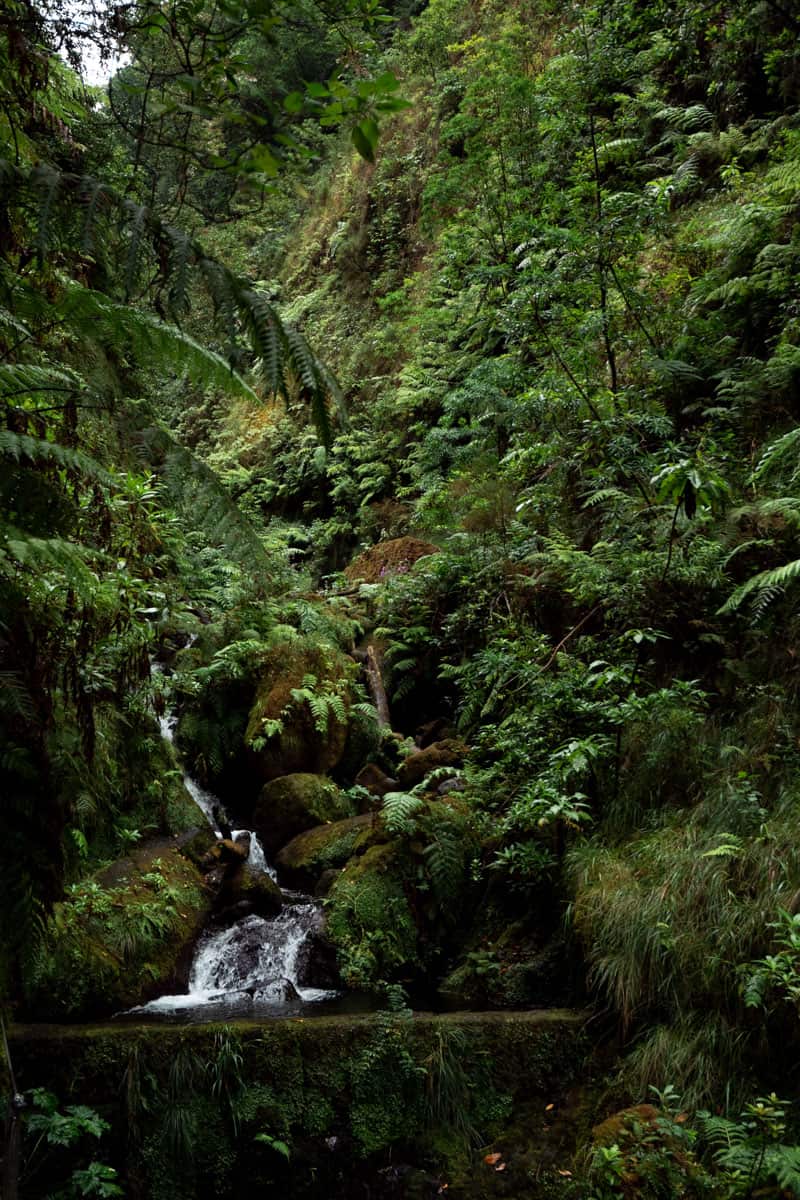 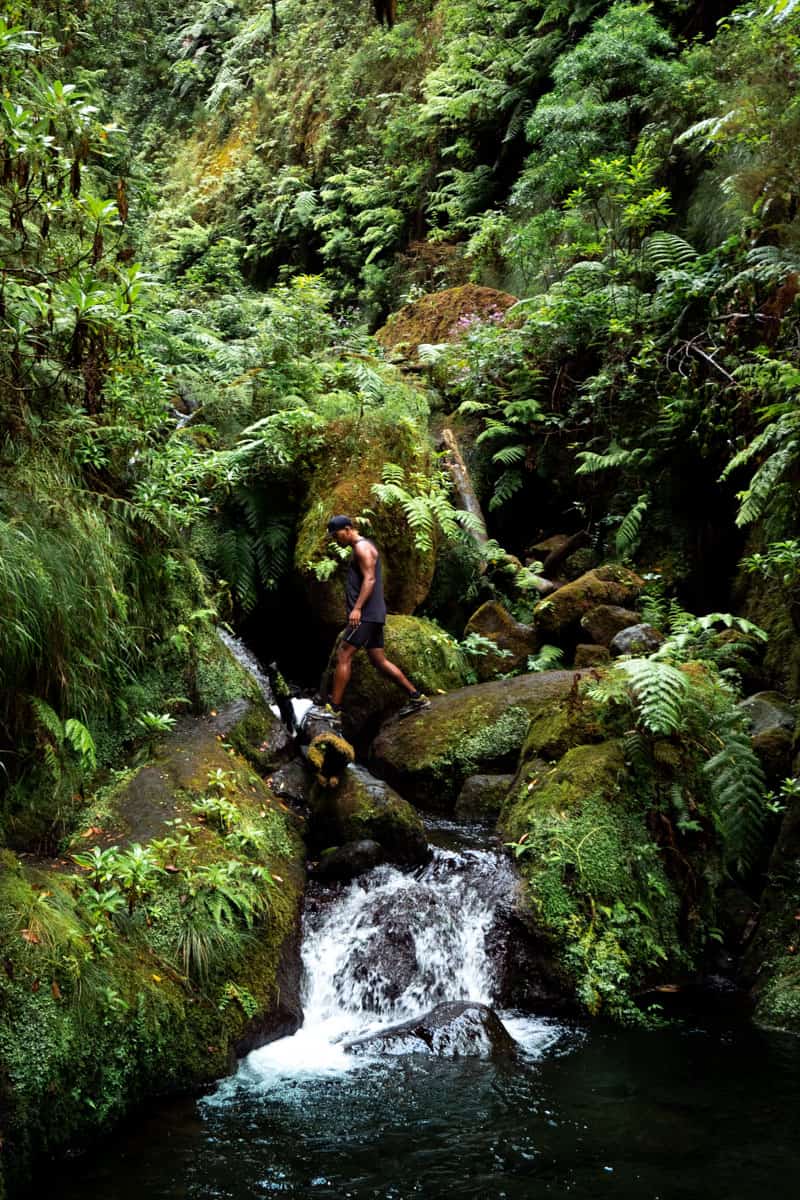 After some time exploring and photographing and the end point of the hike we returned back to the car. Looking back on this levada walk  it turned out to be one of our favourite walks on the island, despite the long tunnel. But it seems that for every beautiful waterfall in Madeira you want to see, you have to put in some effort!

If you’re coming to Madeira for the first time, you might question what the word ‘Levada’ actually means. This word specifies the different Madeira hiking trails. But what is the origin of these Levadas and what is their purpose?

Levadas are little canals of water that wind through the mountains and translates as “carriageway”. These water canals are irrigation systems. They are developed to distribute water from the wetter regions on the north of Madeira to the drier and sunnier areas of the south where lots of plantations are located. The levadas cover a total distance of about 2500 kilometre from the heart of the Laurissilva forest to the most rocky slopes.

The origin of the levadas dates back to the 15th century when the first levadas where created. Their purpose was to provide water to irrigate the sugarcane plantations. Back then sugar was also known as the “white gold” because it was considered as the main engine of Madeira’s economy in the 15th & 16th century. The narrow water canals have ever since the important task to deliver water along far distances. Mainly to banana plantations, vineyards, fruit orchards and vegetable gardens. But also to let the hydro-electric power stations on the island work.

But nowadays, the levadas are also a great way to discover Madeira’s stunning nature. You will see landscapes and different species of flora and fauna along the levadas that are unique in the world. 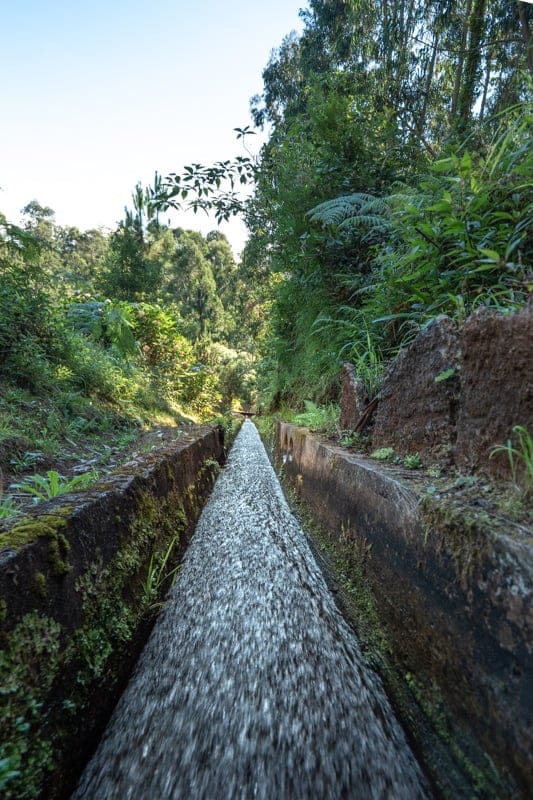 I hope you enjoyed this full guide about the Levada Faja do Rodrigues. For more Madeira travel inspiration and the must visit destinations, head over to our other blog posts about Madeira island.