Fanal Forest is a magical fairytale forest in the northern part of Madeira Island. Often, but not always, there is mysterious fog in the forest amongst the 600 year old trees, creating scenes straight out of a movie! The twisted tree branches with layers of moss on them have such interesting forms that it almost looks as if they’re alive. Whether you’re a tourist, amateur photographer or professional photographer, you have to experience Fanal Forest with fog at least once! But with all the weather circumstances in Madeira, you have to be lucky to get the perfect conditions! Sometimes the fog can be too wet, too thick, or there is no fog at all. In this blog post I will try to explain how you can predict fog at Fanal Forest. But of course also what to expect, the best viewpoints, photography tips for Fanal Forest and the hikes that can be done from here!

The magical Fanal Forest is part of the Laurisilva forest, a UNESCO World Heritage Site known for its ecological importance and beauty. Thanks to its UNESCO status, the Fanal forest will be protected and remain in pristine condition for many years to come so that these ancient trees can continue to flourish.

15 to 40 million years ago, most of Southern Europe was covered in this type of laurel forest. But nowadays, it can only be found in Madeira, the Azores, and the Canary Islands. When explorers first saw Madeira, most of the island was covered by the beautiful Laurisilva Forest. But nowadays, only 16% of the forest is left on the island. It is very important to preserve these forests as they play a major role in preserving the hydrological balance on Madeira Island.

Besides the mystical Fanal Forest, the area around Fanal is particularly known for its hiking trails. While exploring Vereda do Fanal and Levada dos Cedros, you can take in all the different specimens of trees. Each and every tree has its own personality that keep your eyes exploring around. 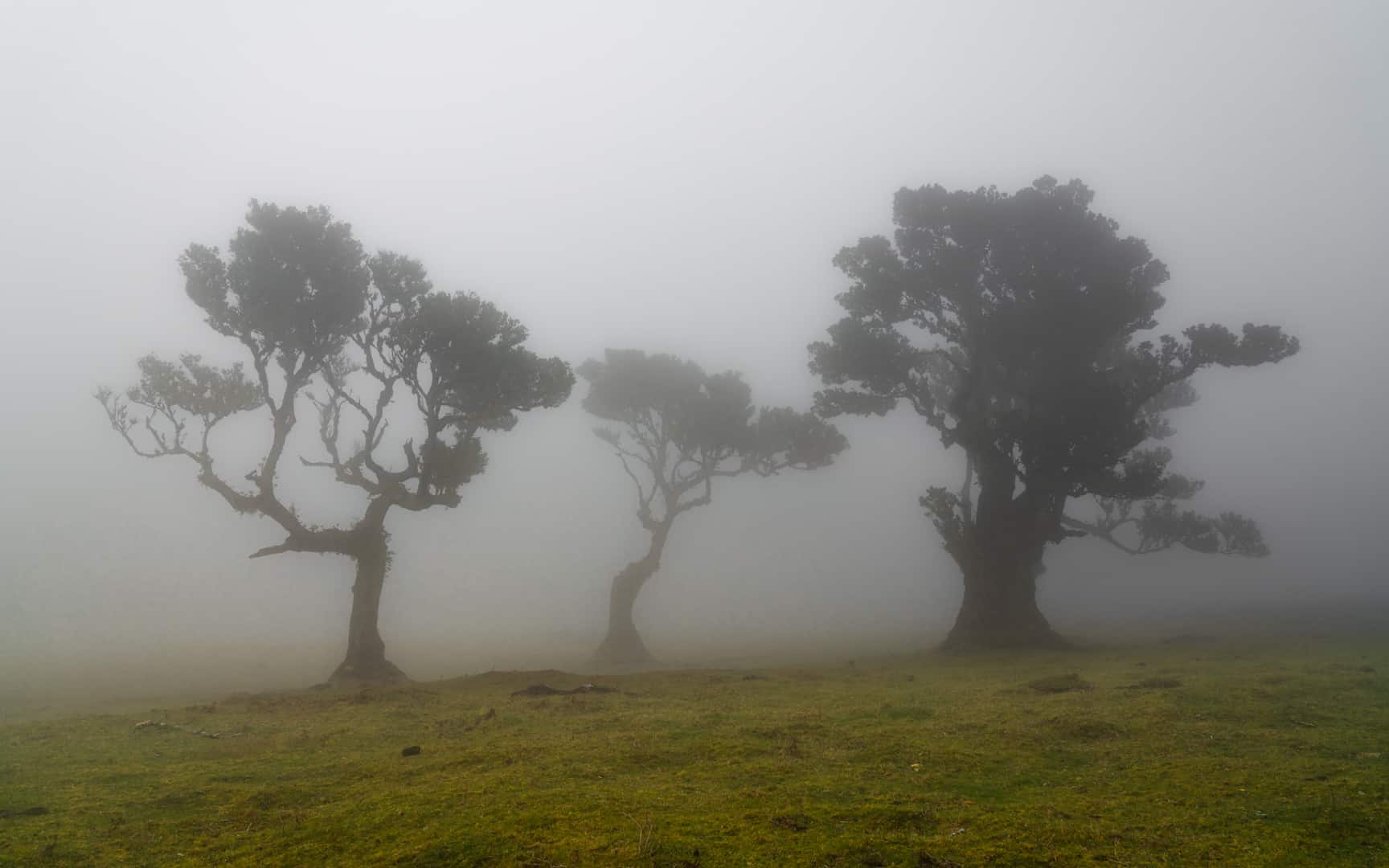 How to get to Fanal Forest

Fanal forest is located on the north-western part of Madeira Island in the Madeira Natural Park. The parking is quite easy to find as you can find the dedicated parking lot on Google Maps as ‘Fanal Parking’ and ‘Posto Florestal Fanal’. Both parkings are at different entrances, but I would say that Fanal Parking is the most central parking. One of the parkings is directly next to the road with picnic tables and the other parking is a little side road near a white building. Take into account that there are no facilities at all near the forest. So bring enough water and snacks. From Funchal it is about an hour drive to Fanal Forest, but from Calheta it’s only 30 minutes. 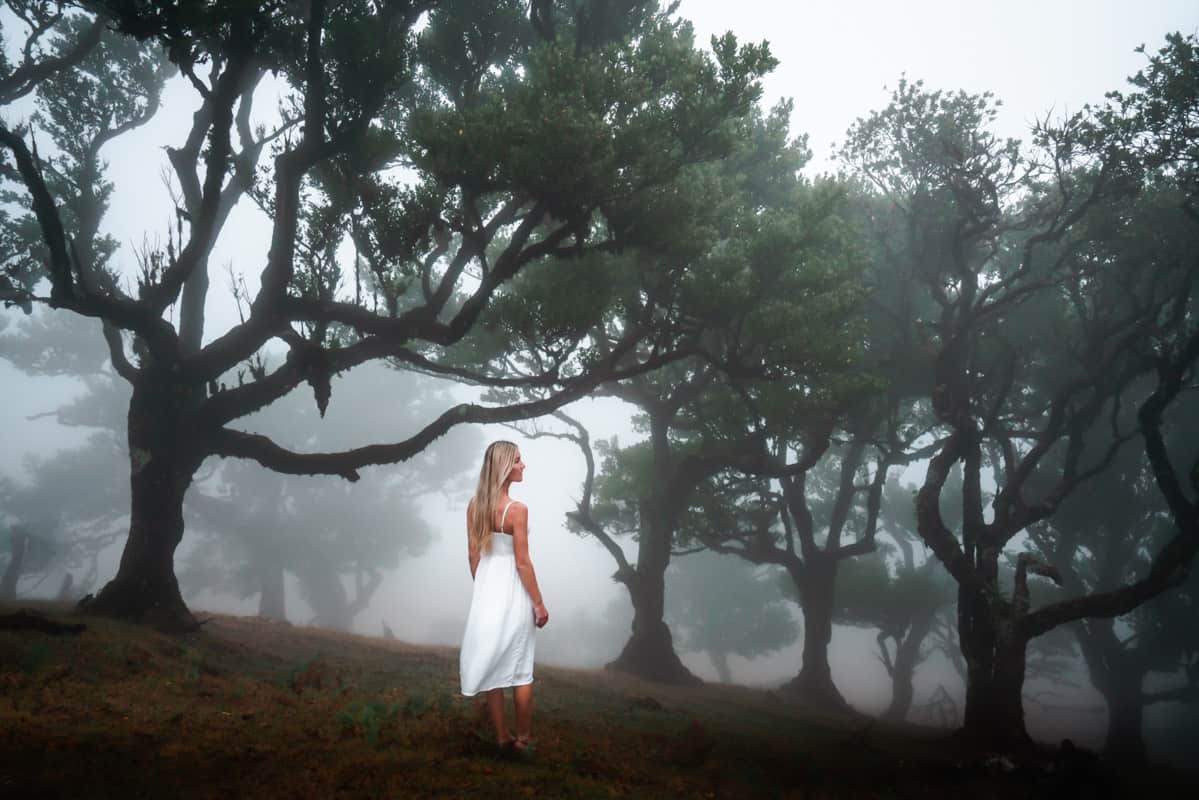 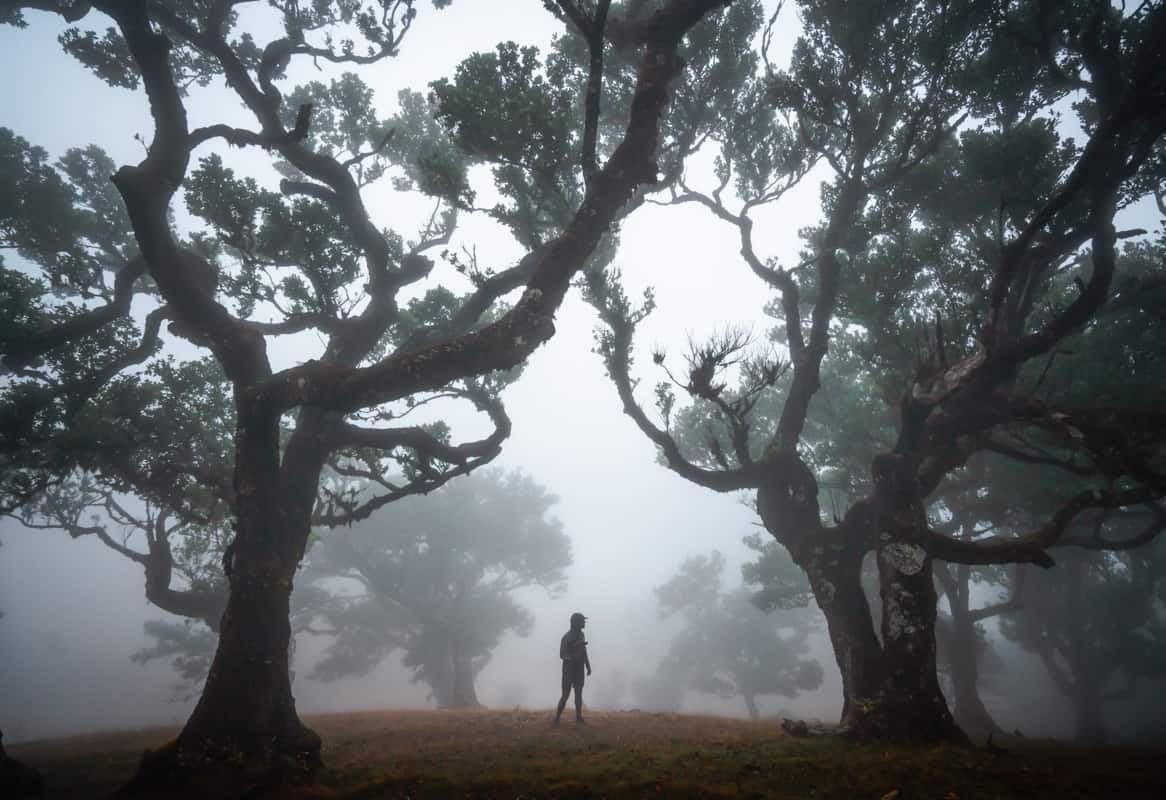 It doesn’t really matter in which month you visit Fanal Forest because it’s perfect for exploring year round. But, as you might have seen in our pictures, the forest can be covered in fog. This creates a mystical vibe straight out of a movie! Of course the fog is not always there, but it is quite common that it hits this area of the island which is on 1150 meters above sea level. 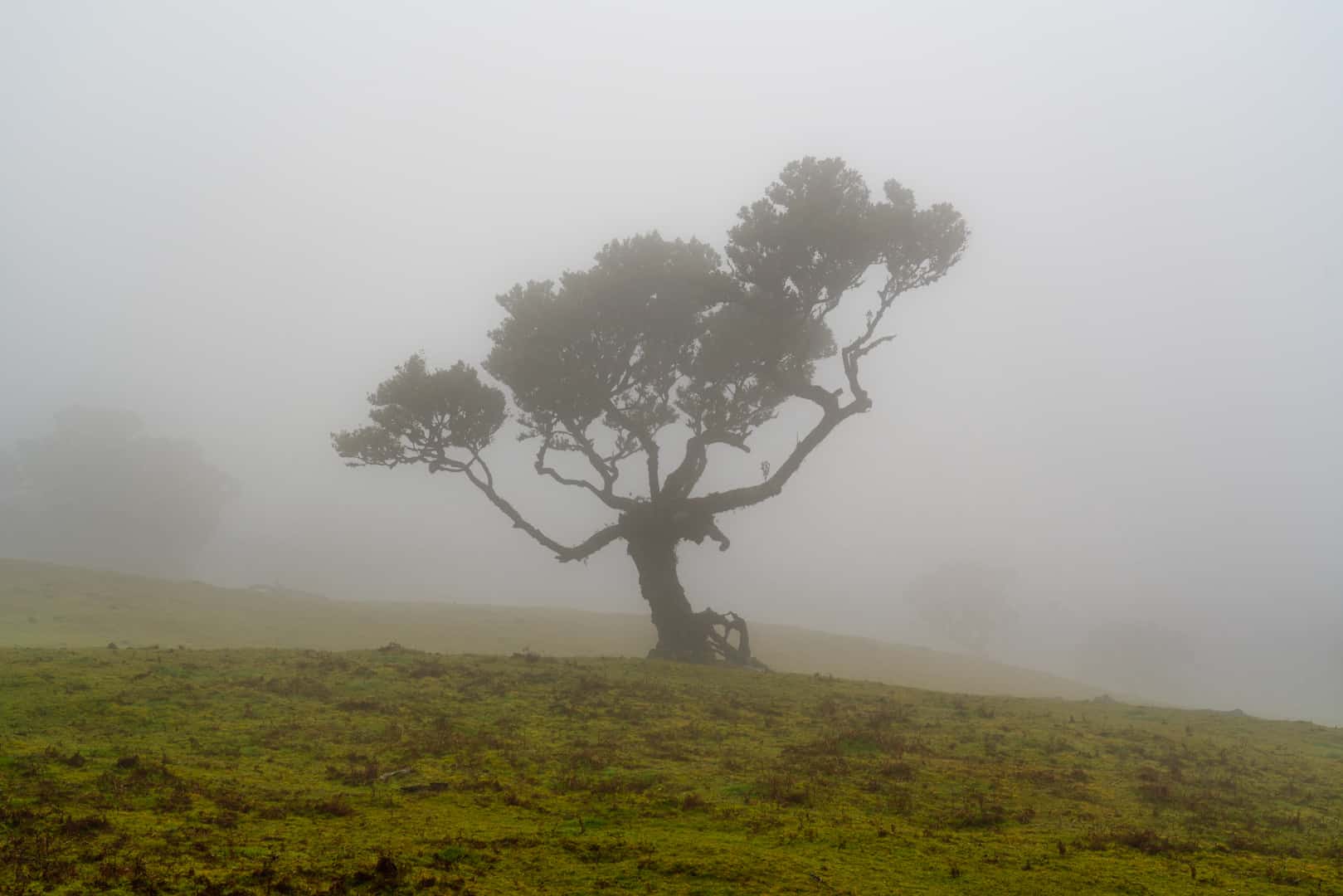 How to predict fog at Fanal Forest

It’s very hard to predict when there will be fog in this area. Sometimes it’s there in the early morning, sometimes also during midday. We have been to Fanal Forest over 10 times during the 7 months that we’ve lived on Madeira Island. We went many times in the morning and were only 2 times lucky with the right foggy circumstances. Other moments of the day we had fog were around midday. It is completely depended on the weather conditions per day. If the weather is moody in Madeira, then you have more chance of fog at Fanal Forest. The best way to know is to look up to the sky and estimate if it’s low or high clouds. When the peaks of Madeira are covered in clouds, which is between 1700-1800 meters, you have a chance of fog at Fanal Forest. Just like many other photographers that went to Madeira for this mystical forest, you have to try as much as you can. Sometimes you’re lucky in the first attempt, sometimes you have to come back several times. 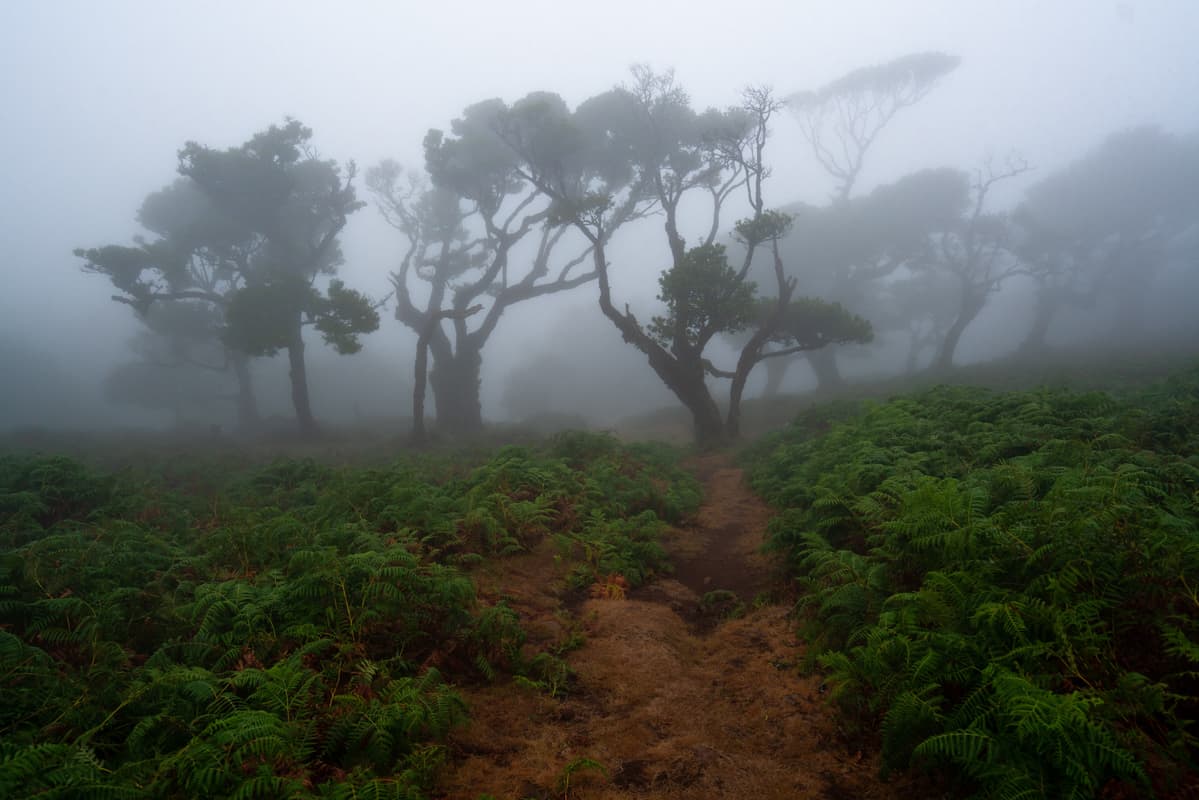 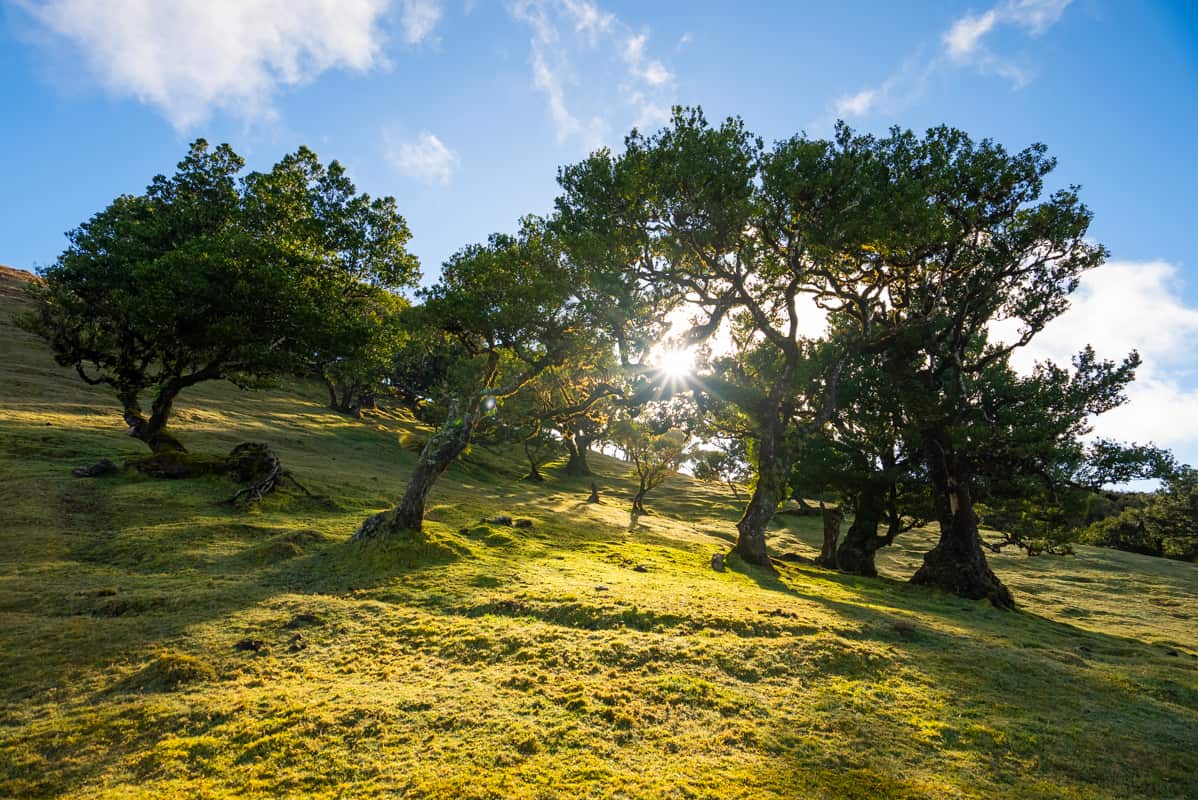 What to expect at Fanal Forest

It is very hard to explain what you can expect at Fanal Forest because it is so different and depended on the weather. With sunny clear skies it is a great place for a picnic and a walk. There is a public bbq spot at the parking lot and there are several concrete picnic spots scattered around the parking. A perfect place for a lunch break.

Once you make your way into the forest, you can expect some cows that live here. Don’t be scared because they are used to people. But make sure to not bother them. If they get curious and walk towards you, keep calm and turn away from them. Of course, always keep an eye on where these animals are. They can be jolly and jump around. For some people this might feel intimidating. 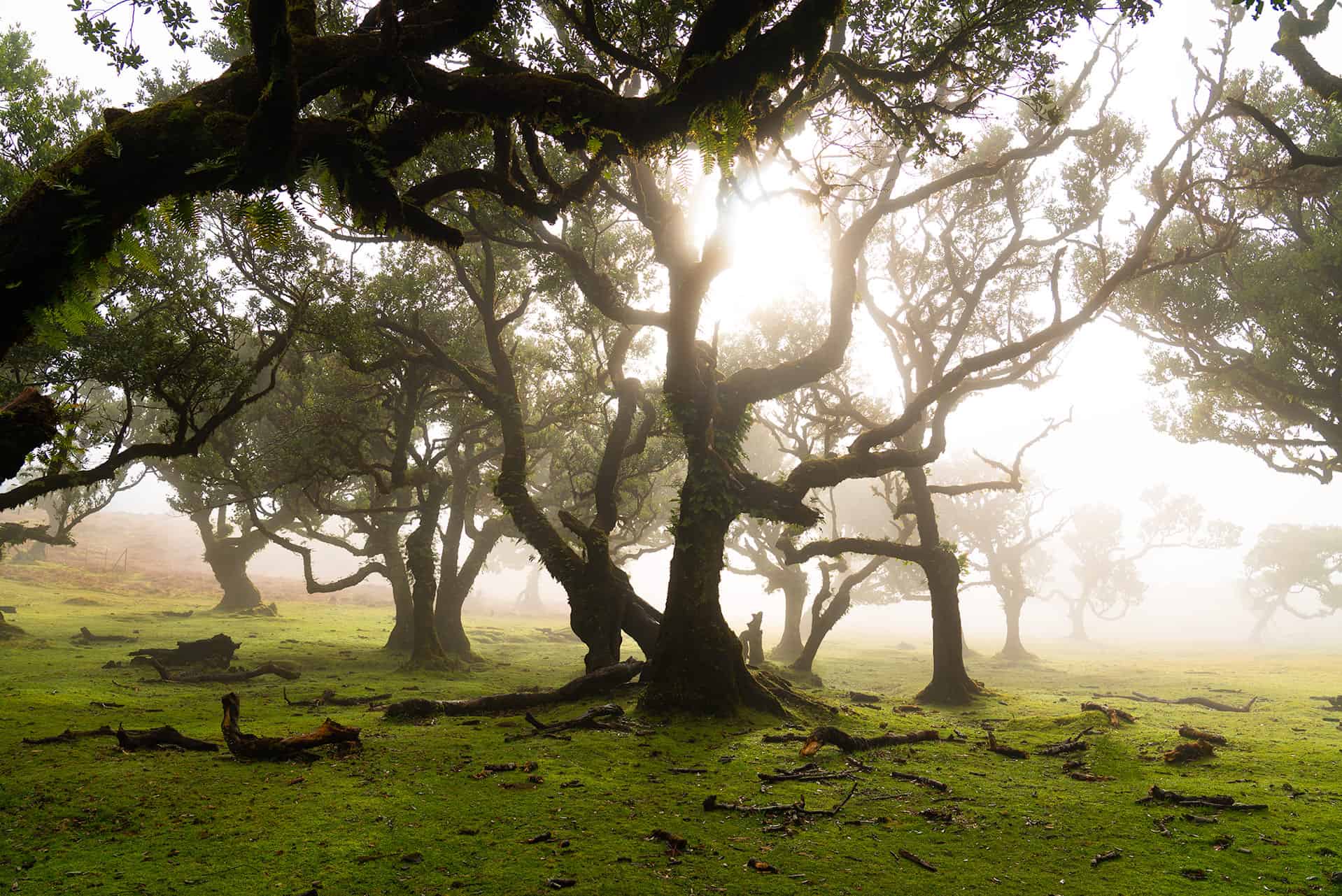 It might be clear now that the weather really determines how your experience of Fanal Forest will be. All weather conditions are beautiful. Even with sunset, without fog, but with beautiful low hanging clouds we had a wonderful shoot here. Every moment of the day and type of weather has its charm. But of course the fog is most magical and will let you feel as if you’re walking in a fairytale dream world. 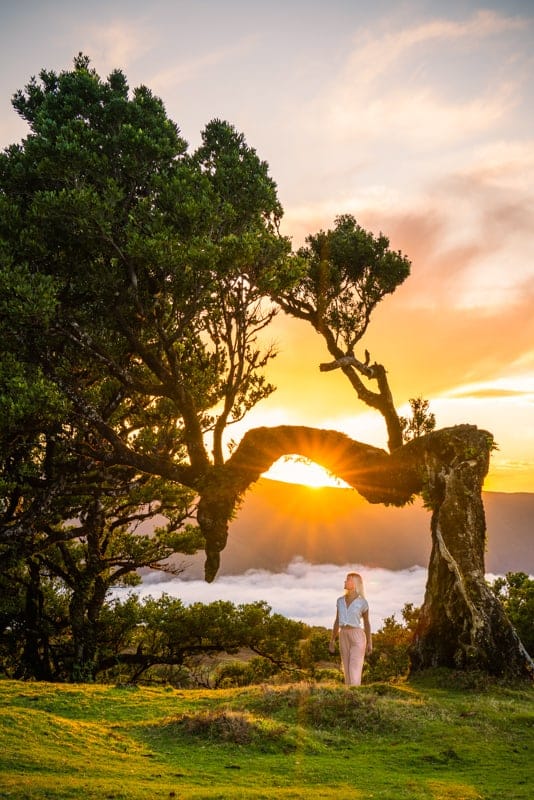 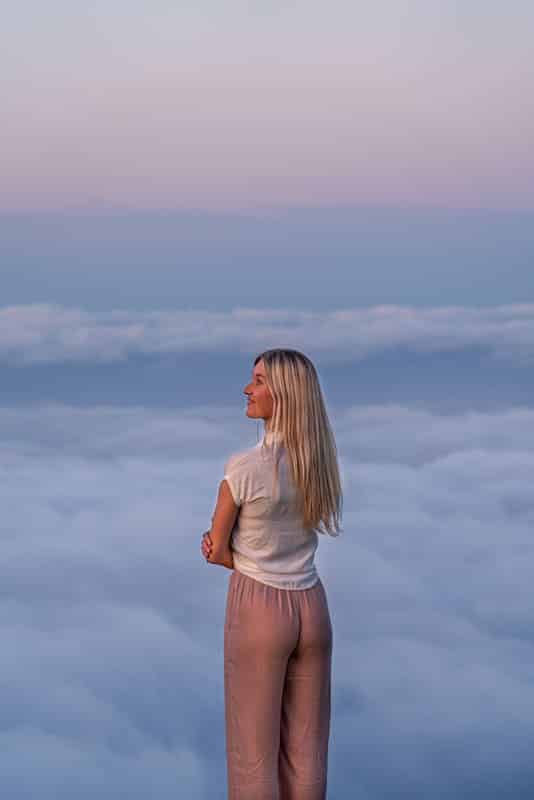 During the many times we went to this magical fairy tale forest, we also made a short video. Below you can watch our short video about Fanal Forest Madeira!

But also for our final Madeira film we used a scene of Fanal forest in our film. Below you can watch our complete Madeira film called ‘Forever Madeira’. Please enjoy watching this video we worked for about 7 months on while living in Madeira.

Whether you’re a tourist, amateur photographer or professional photographer, Fanal Forest is a perfect place to challenge your photography skills. The amount of fog has a lot of influence on the type of pictures you can create. All the trees together in Fanal Forest can look a bit too chaotic on pictures without fog. So that’s the huge advantage of foggy days, it hides chaos in forests.

We have experienced Fanal Forest during all sorts of weather conditions. With almost too thick fog, wet fog and also without fog. Every time the forest looked different and the outcome of pictures was also different. Some tips for photographing with foggy circumstances are as following. 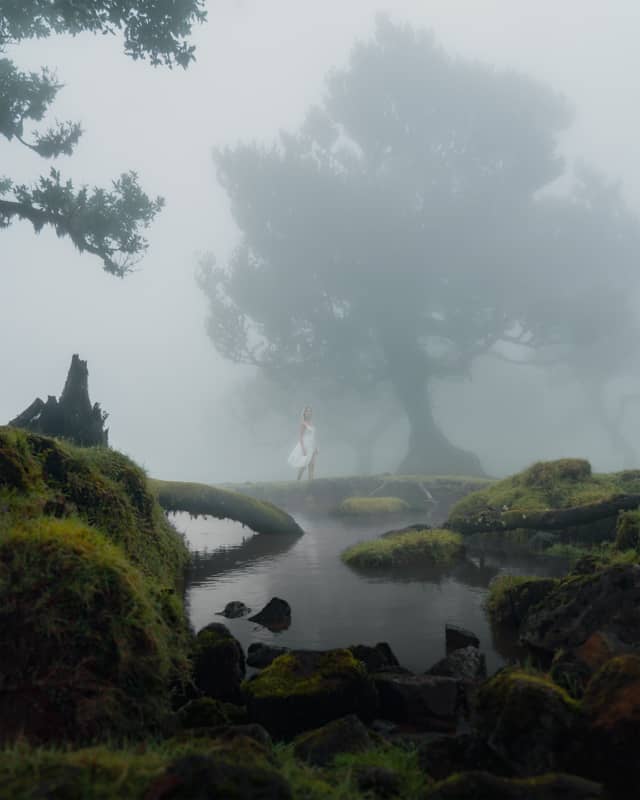 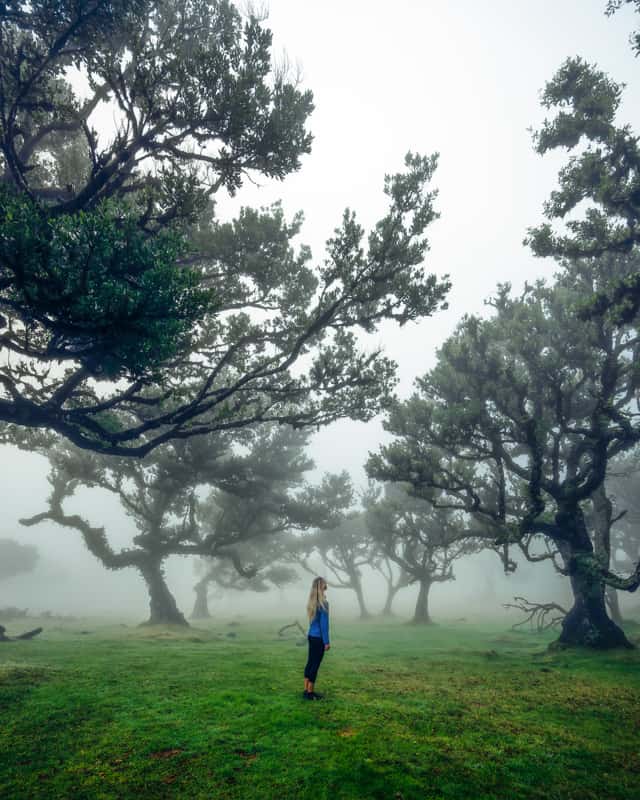 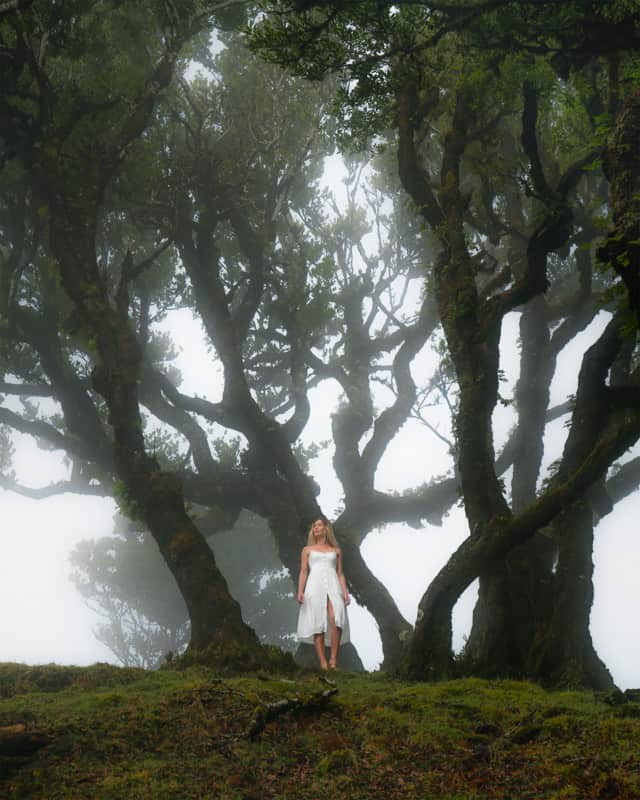 Once you make your way up the hill towards the pinnacle, you will have amazing views over Fanal Forest on one side and towards Seixal and the ocean on the other side. This view can change completely with different weather. Sometimes we saw only a sea of clouds but clear skies above, and another time there was just too much fog to actually see anything. Therefore this is such an interesting part of Madeira. Always different and with a different character. 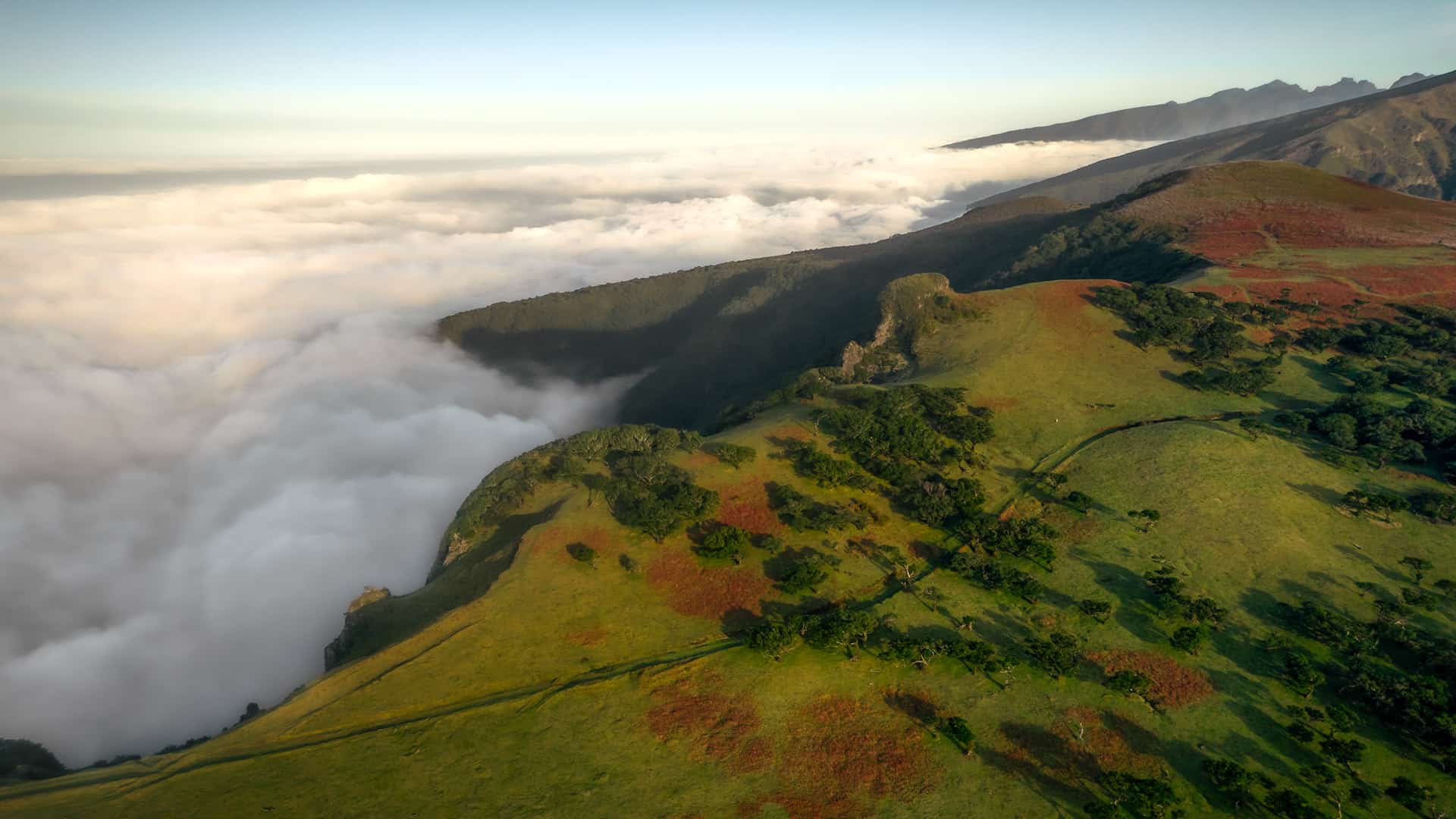 Fanal Forest from above with the drone. You can see the trees dotted over the area and the pinnacle sticking out from the landscape 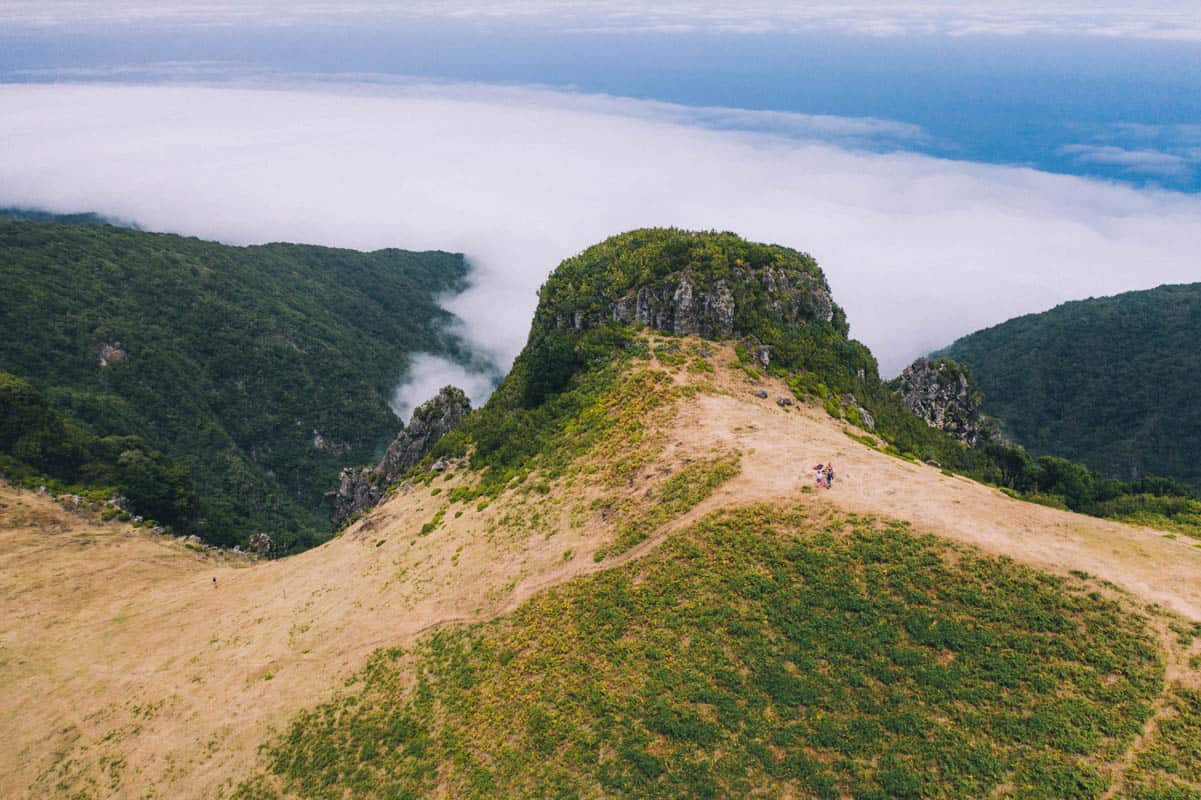 The pinnacle from Fanal Forest seen from a bit closer. Beautiful low hanging clouds on the ocean side 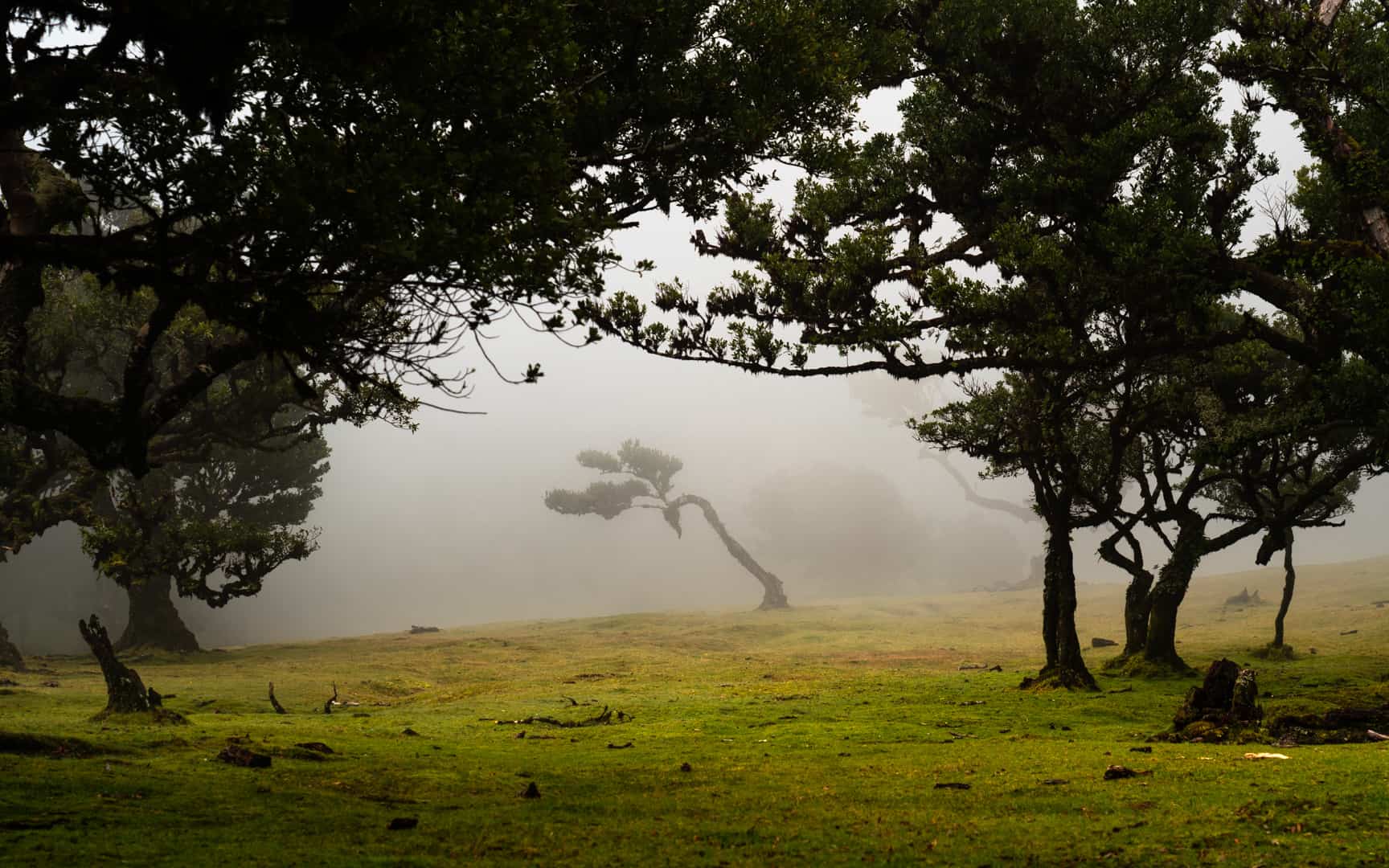 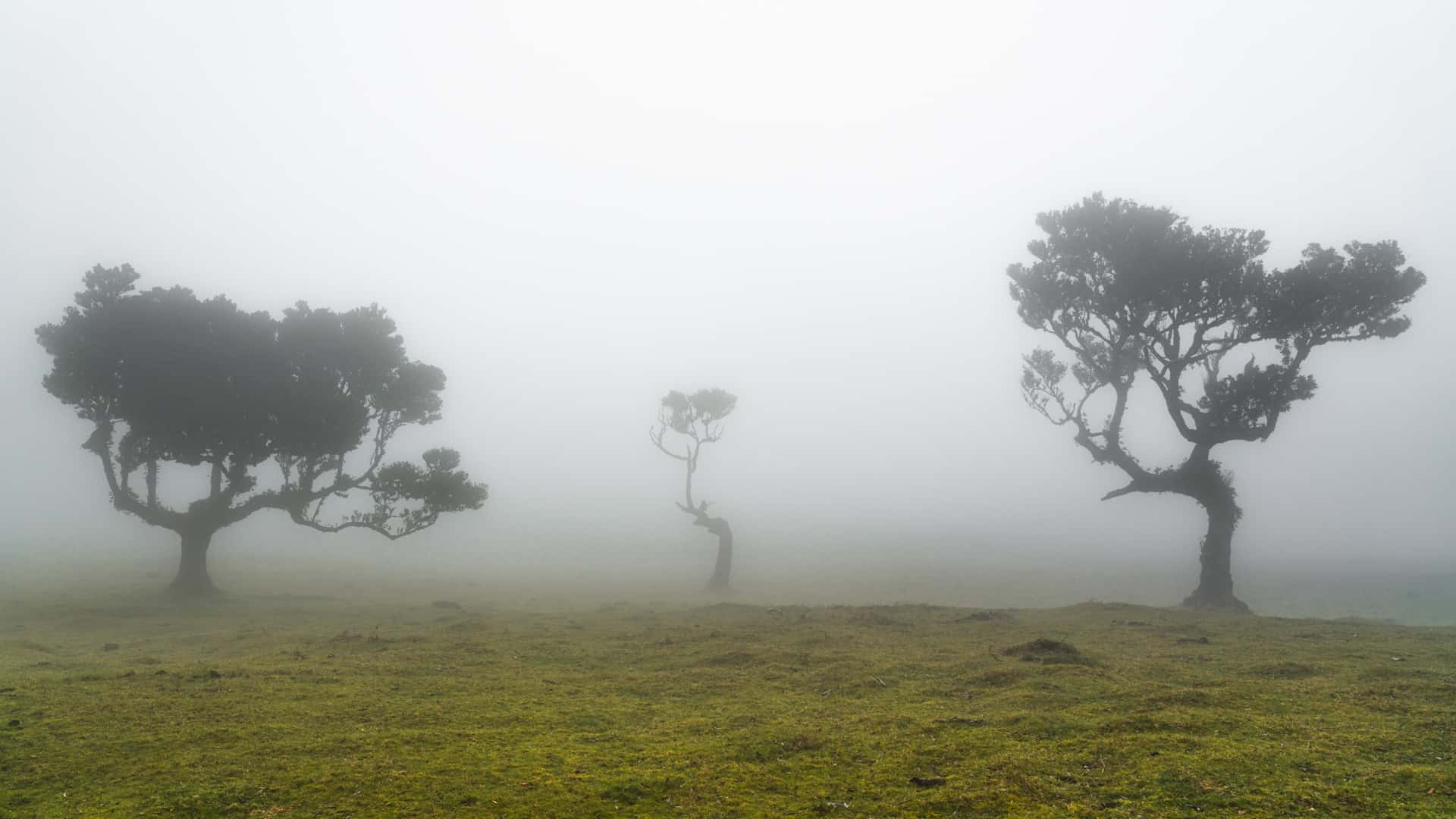 Only after heavy rain, a pond arises a little bit further down the road from Fanal Forest. This Fanal lake, also known as Lagoa do Fanal, almost looks like a mirror and creates beautiful reflections. It’s perfect to take photos or to have a picnic. You can walk around Fanal lake and find some of the same twisted trees as in Fanal Forest itself. We loved to play around with the reflections. Below one of the results from our shoot here and an aerial view of the pond. 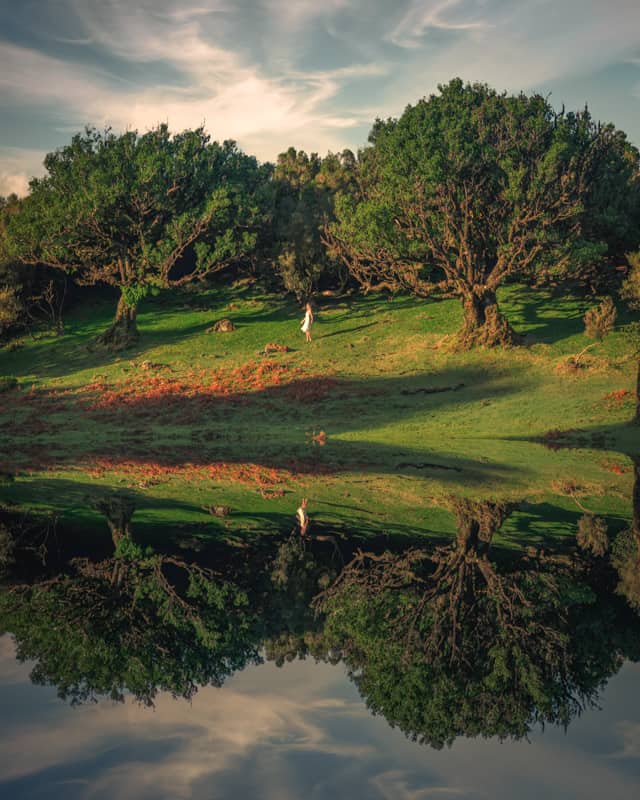 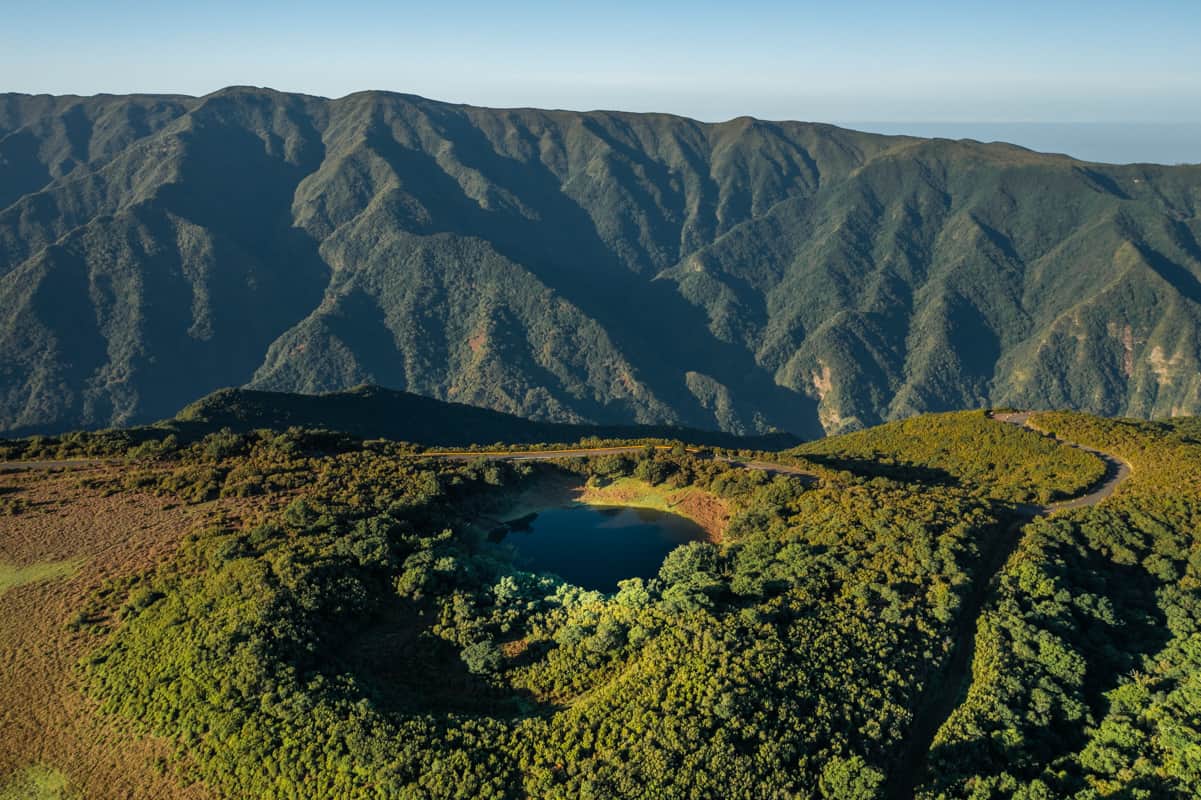 One of the hikes that crosses Fanal Forest is Vereda do Fanal. This 11 kilometre one way hike takes you along the Paul da Serra plateau and ends at Posto Florestal Fanal. Because it is a point to point hike, it means you either have to hike your way back, get a taxi back to your car or hitchhike. You start this hike along the ER209 at PR13 sign for Vereda do Fanal.

In the first part you follow a forest trail with some stairs here and there, alternated with the incredible views on the Rabaçal valley. The tree branches which create a natural shelter of the sun are a welcome variety from the open spaces on the trail.

When entering the last two to three kilometres of the hike you will see a little change of scenery. The paths are now accompanied by the typical Ocotea Foetens, also known as Stinkwood tree, which is the enchanting and famous Fanal tree with twisted tree branches.

You then will eventually end the Vereda do Fanal hike on the hill that looks out over Fanal Forest below.

Read here everything about Vereda do Fanal 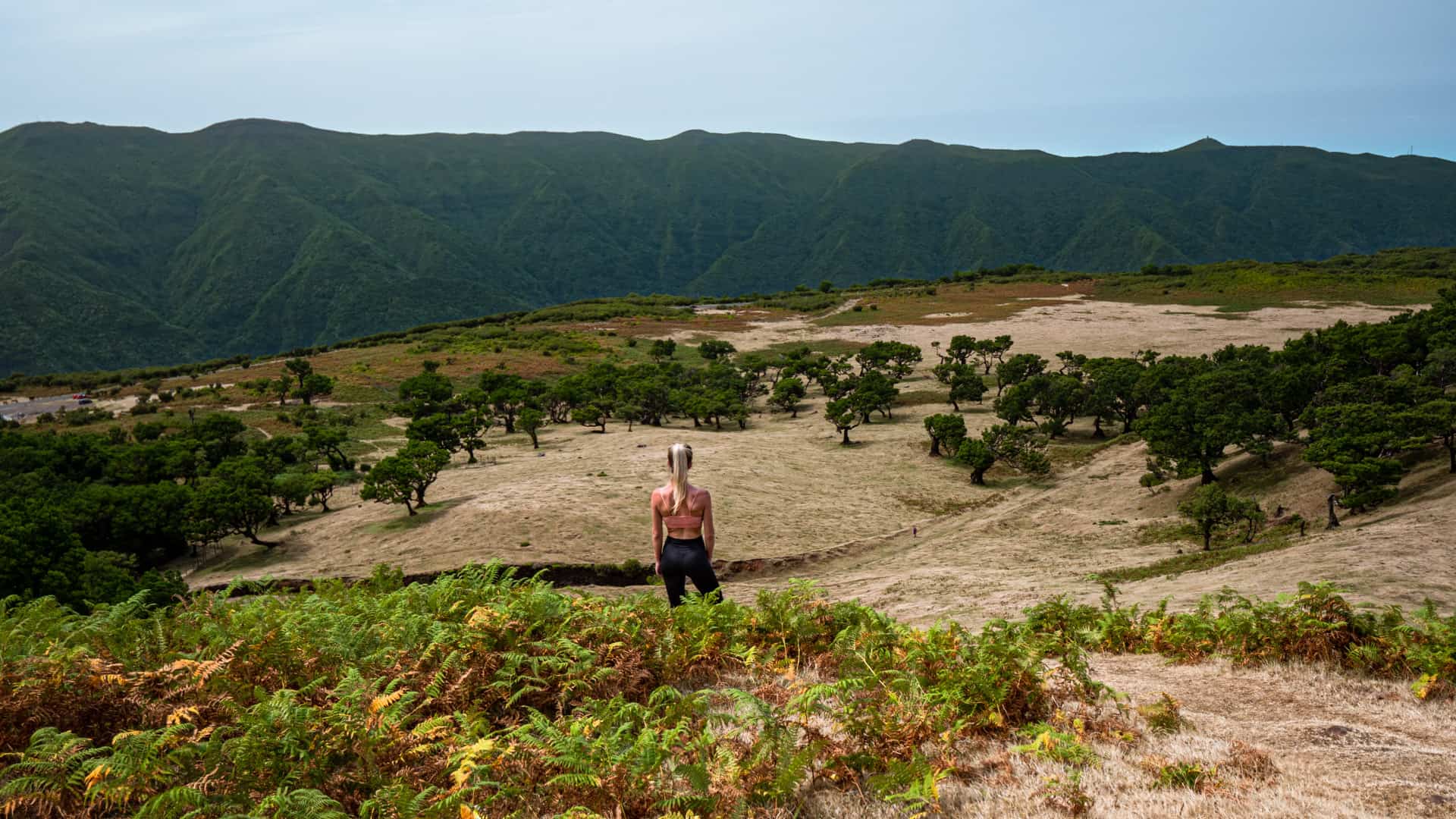 The second hike that starts in the area of Fanal is Levada dos Cedros. This levada walk is one of the oldest watercourses built on the island, originated in the 17th century. During the Levada dos Cedros walk you will pass through the area of Madeira’s primitive forest until it reaches the parish of Ribeira da Janela. The beautiful Laurisilva forest is classified as World Nature Heritage by UNESCO in 1999 and is in a vibrant state of conservation and development. At the end of the Levada dos Cedros you will find a few beautiful waterfalls to refresh. Eventually you can combine a visit to Fanal Forest after you come back from Levada dos Cedros. 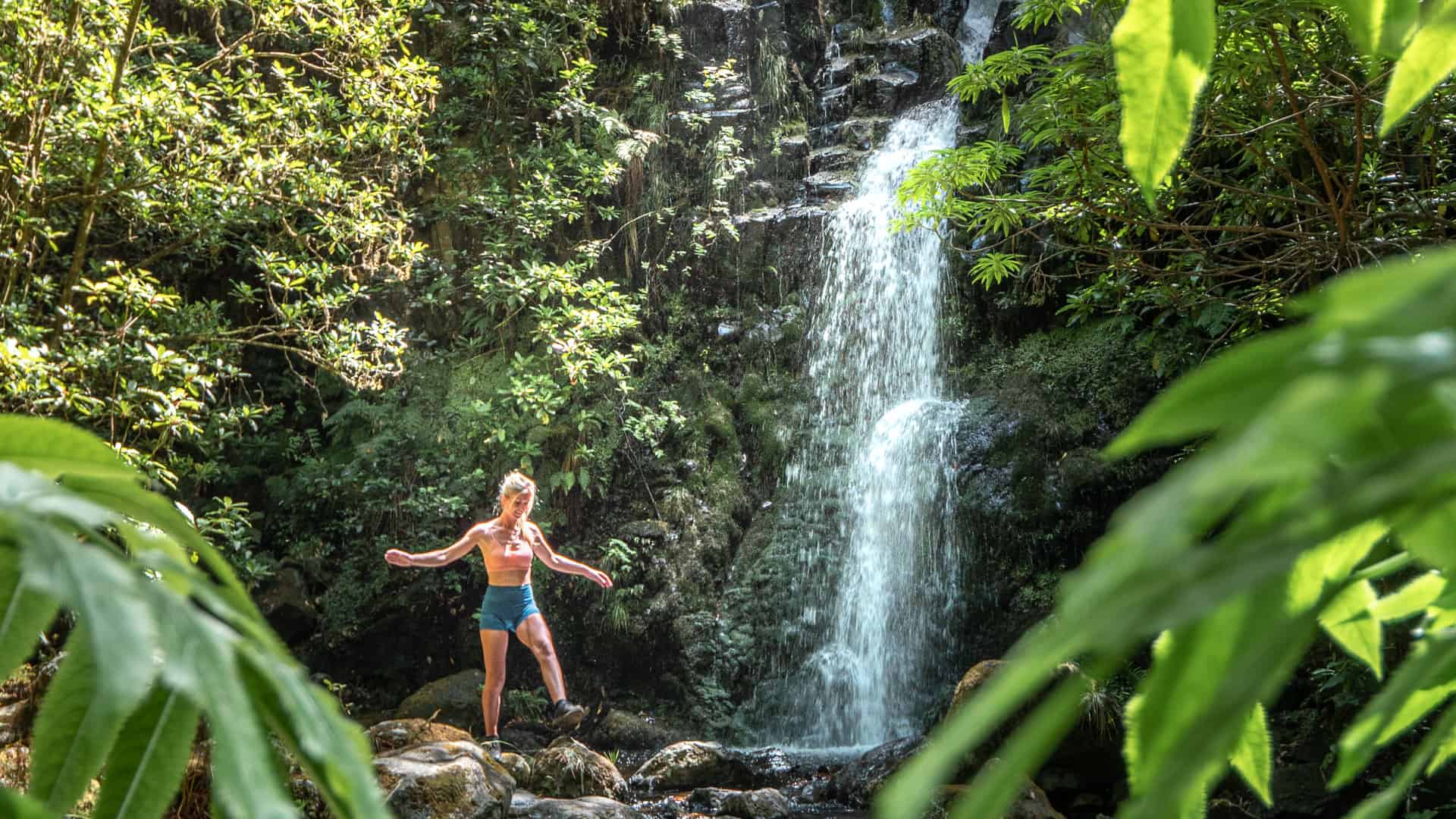 I hope you enjoyed this blog post about the magical Fanal forest.