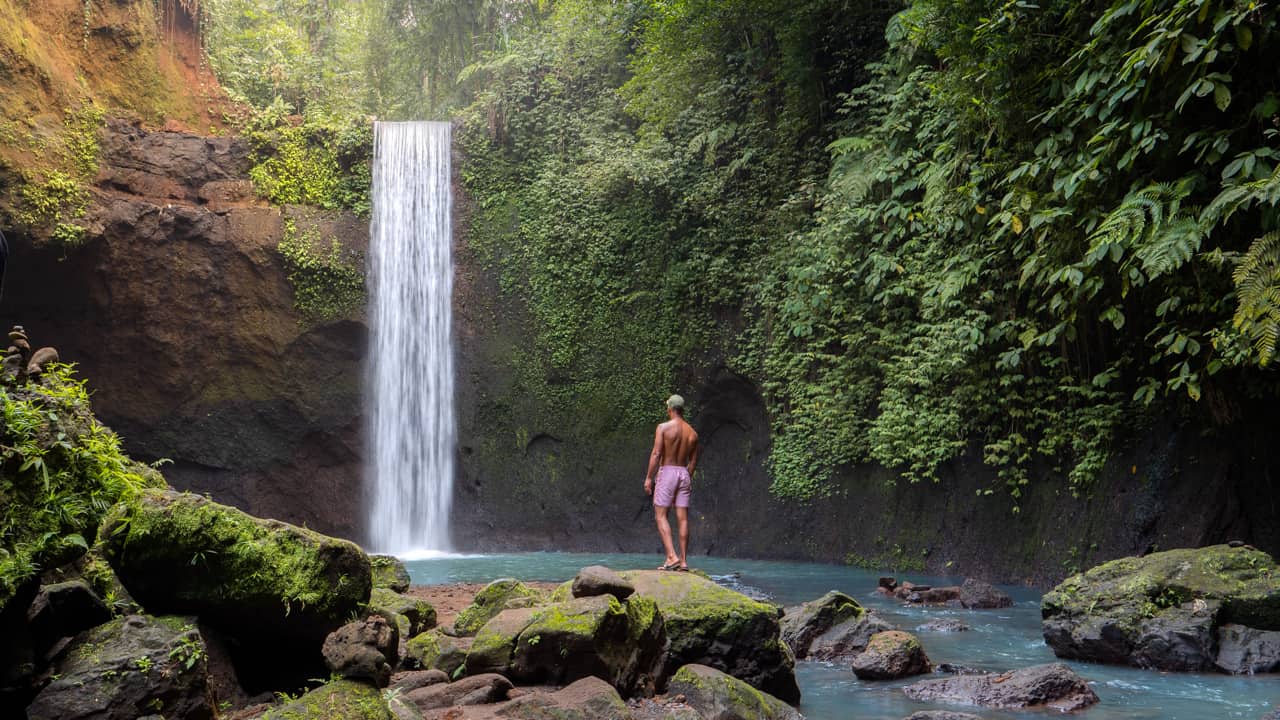 Tibumana waterfall is a beautiful waterfall close to Ubud, located in the village of Apuan in Bangli Bali. The height of Tibumana waterfall is about 5 meters. During rainy season there will even be a second stream flowing down making Tibumana a twin fall! What makes this waterfall so unique is the perfect straight form of the water gushing down and because there is a kind of cave behind the waterfall.

Once you arrive at the path leading to Tibumana waterfall, you will walk through the beautiful jungle which is a perfect opportunity to admire the exotic Balinese vegetation. The 10 – 15 minute walk down to the waterfall is super easy with the well-maintained steps. It is easy to do for young children or seniors. After rain the steps might be slippery so always be careful 🙂 You can do this hike on flip-flops, but water shoes might be a better idea as there are some sharp and slippery rocks at the pool of Tibumana. 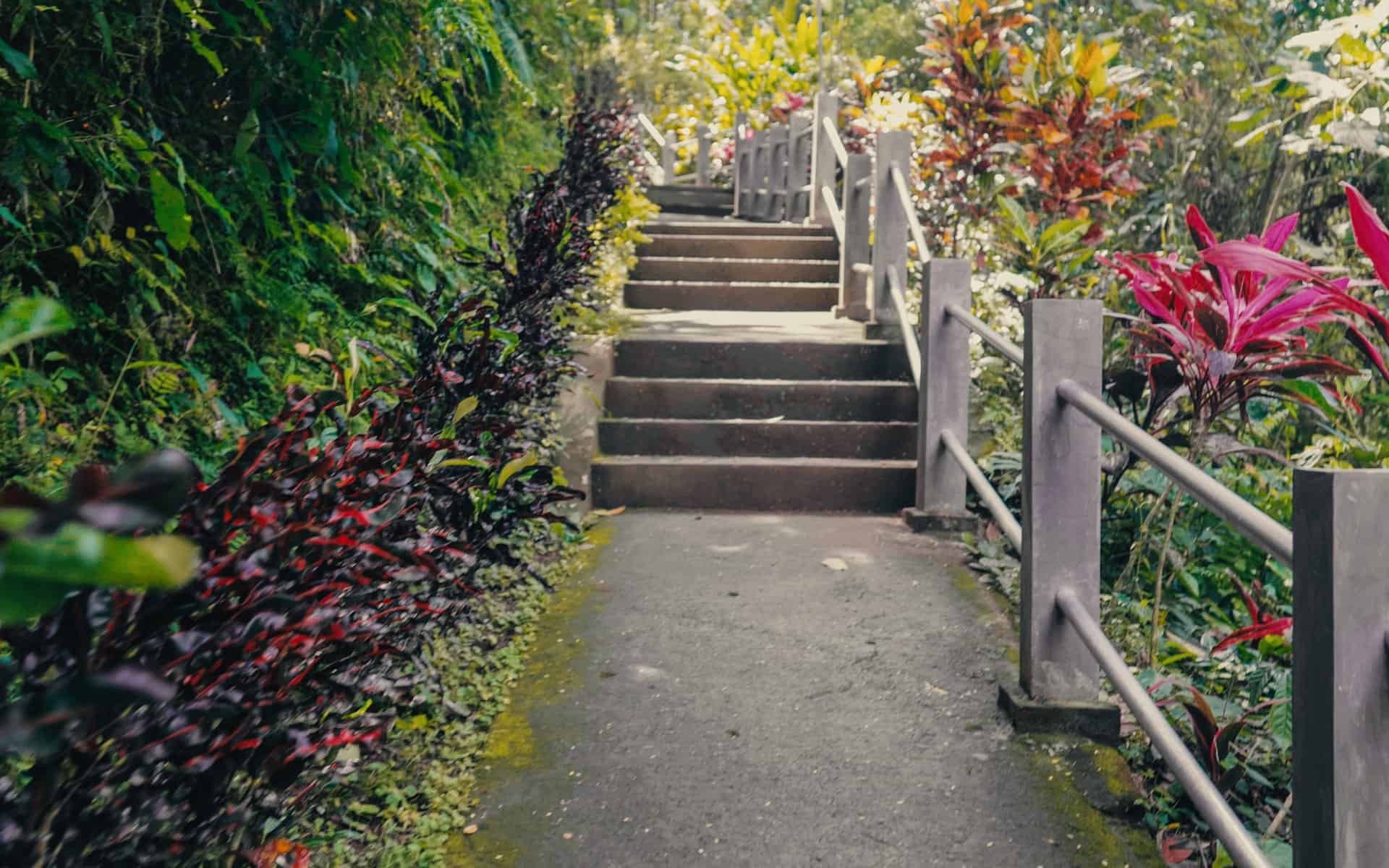 Before you arrive at the Tibumana waterfall, first you will pass another smaller waterfall which is showed on the picture below. After this waterfall you have to follow the bamboo bridge to reach Tibumana.

Once you’ll get to the beautiful Tibumana waterfall, take a minute to read the rules and respect them. This is the list of the rules. 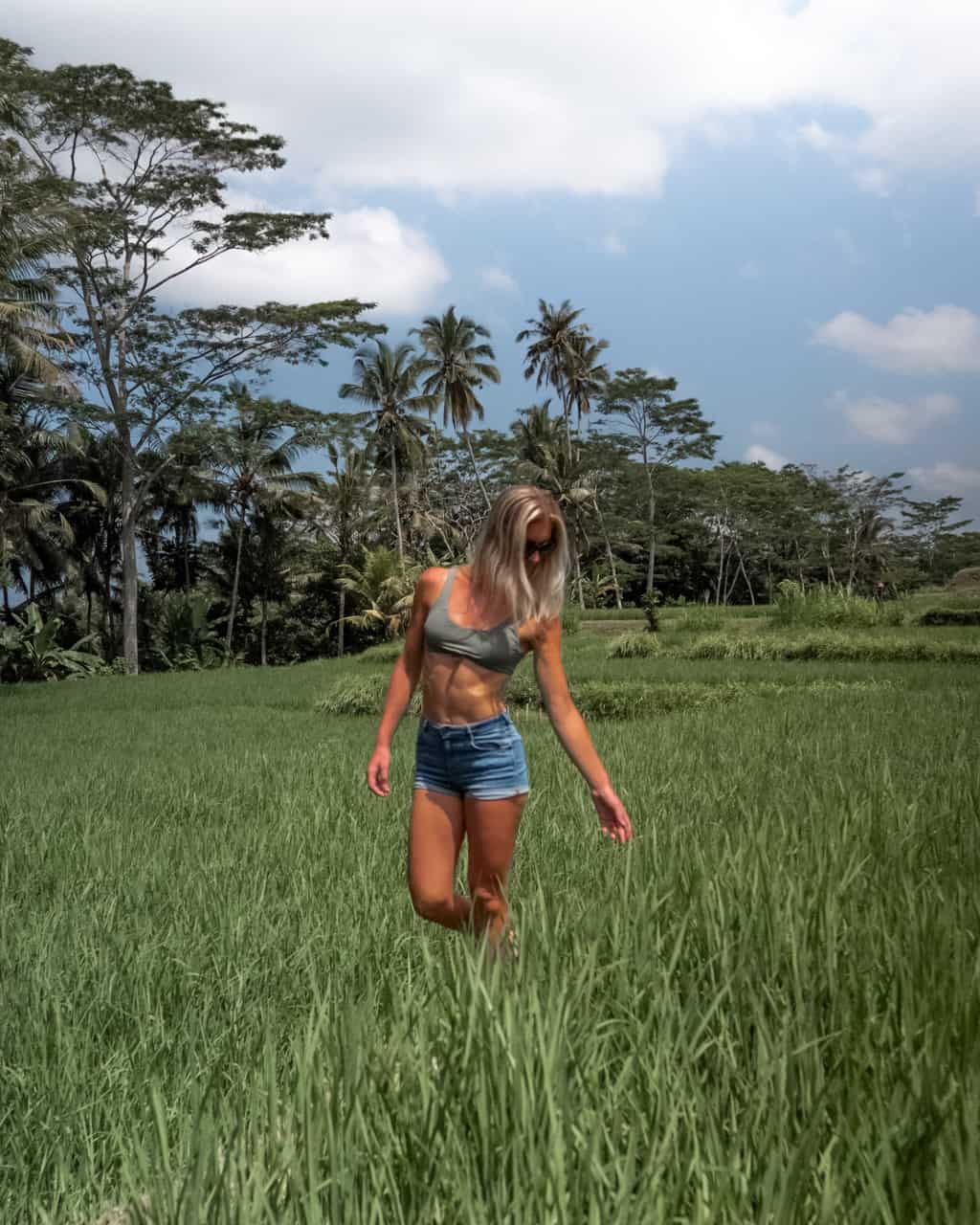 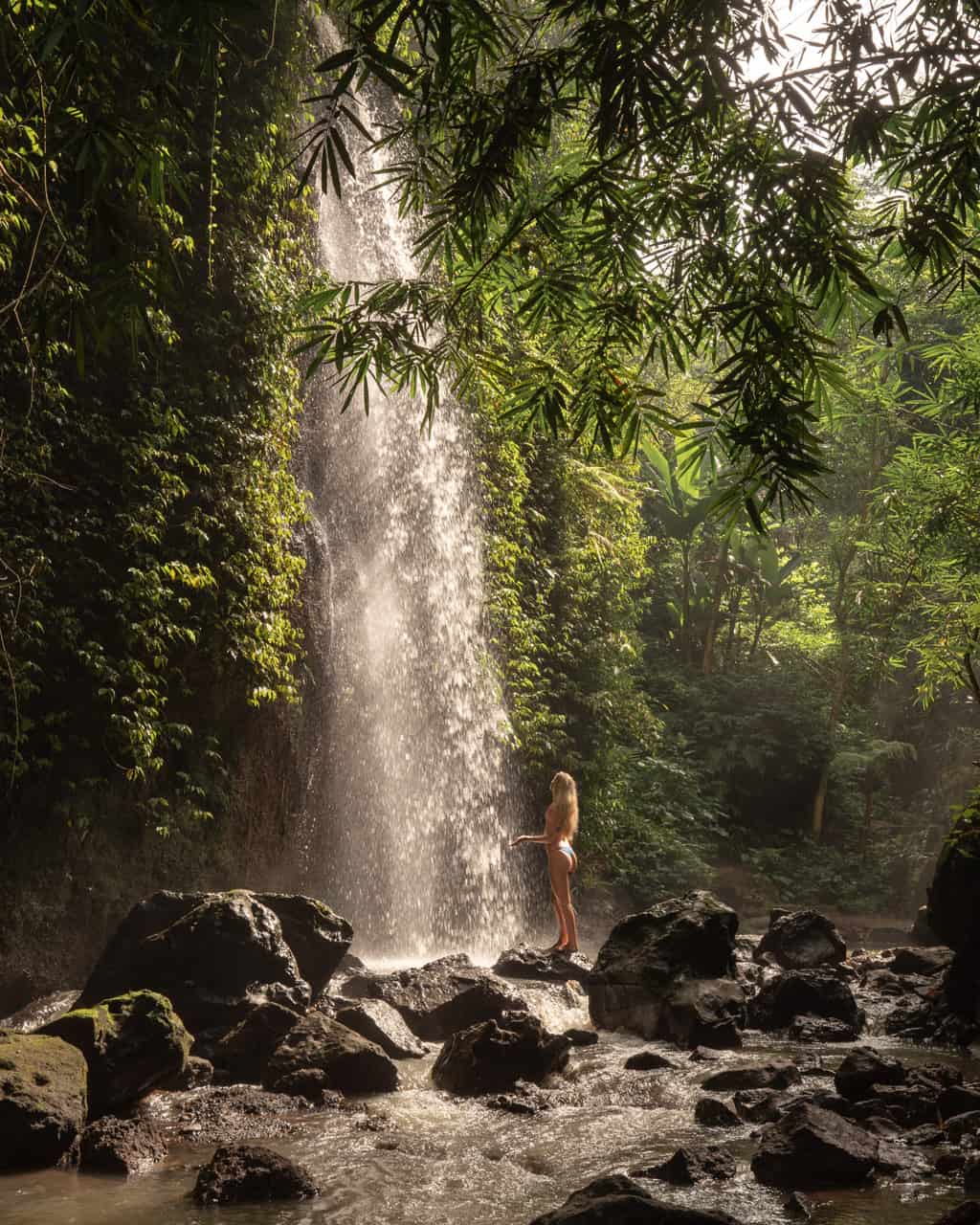 How to get to Tibumana Waterfall

From Ubud centre it is just a 15 km drive East before you reach Tibumana waterfall. From Canggu it is more-less an hour drive, but be prepared for the traffic along the way! Google Maps will easily show you the way.

The drive towards Tibumana waterfall is beautiful through the local villages and nature. When you get closer to Tibumana waterfall, you’ll notice endless rice fields and palm trees. Take your time to enjoy this authentic Balinese view with rice terraces and local people at work. Or take a picture of them, or yourself wandering through the rice fields.

Right before you enter the car park at the Tibumana waterfall entrance you will pass a spectacular palm tree road! Super cool to take a picture 😉
Once you arrive at the car park, there is a small Warung where you will find a restroom to change clothes or have a sanitary stop. You can also order great food at the Warung with a beautiful view of the rice fields.

Another option is to hire a private driver who will drive you around the whole day for around 500.000 IDR, depending on the places you want to see and the number of people sharing the car. 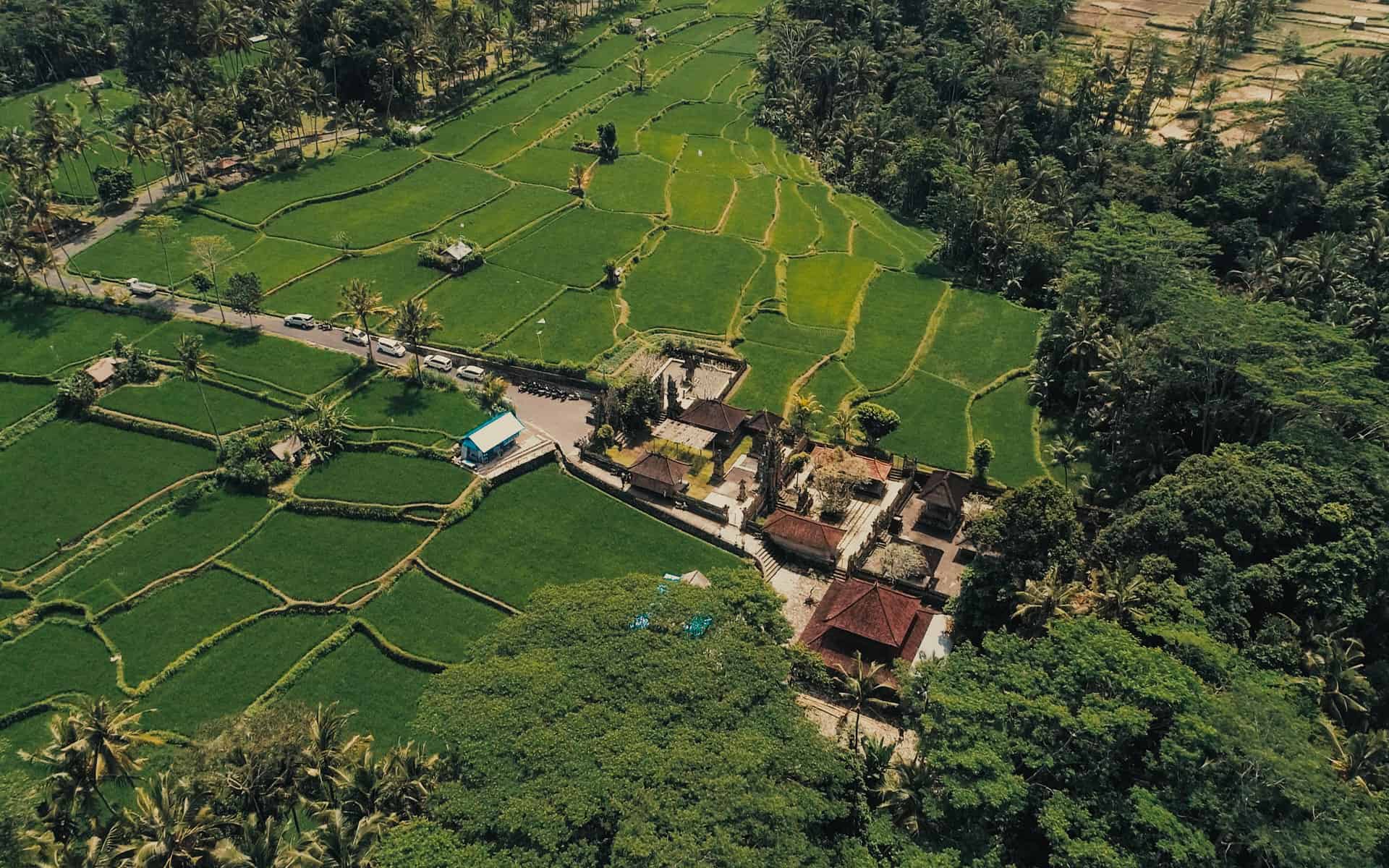 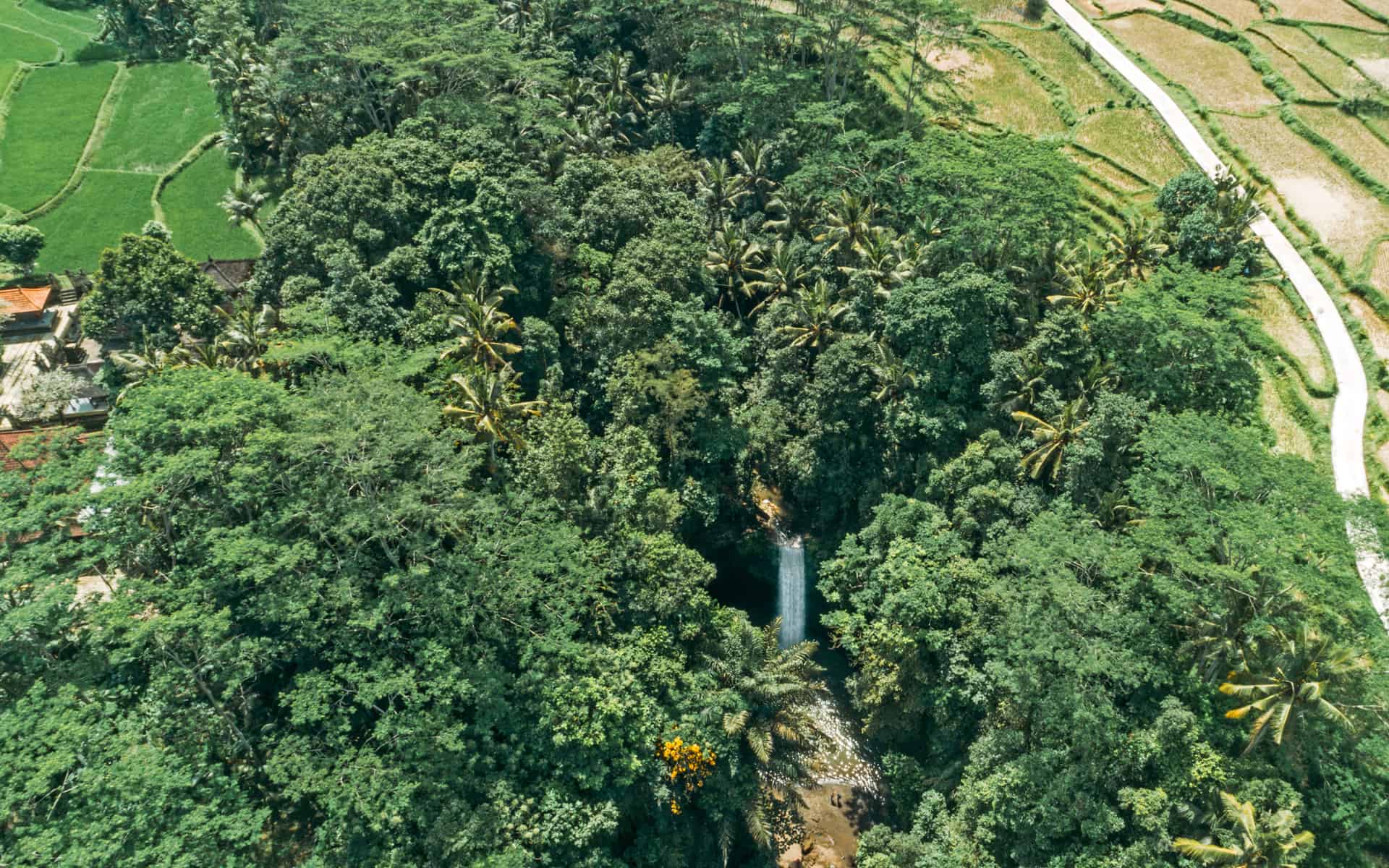 The entrance fee is only 10.000 IDR. After you’ve parked your scooter (close to the temple), follow the path along the rice fields until you find a small booth where you have to pay the entrance fee. From there you only have to follow the path until you see the stairs who will take you down to the Tibumana waterfall. If you need a locker you can rent one for 5.000 IDR to keep all your belongings safe. 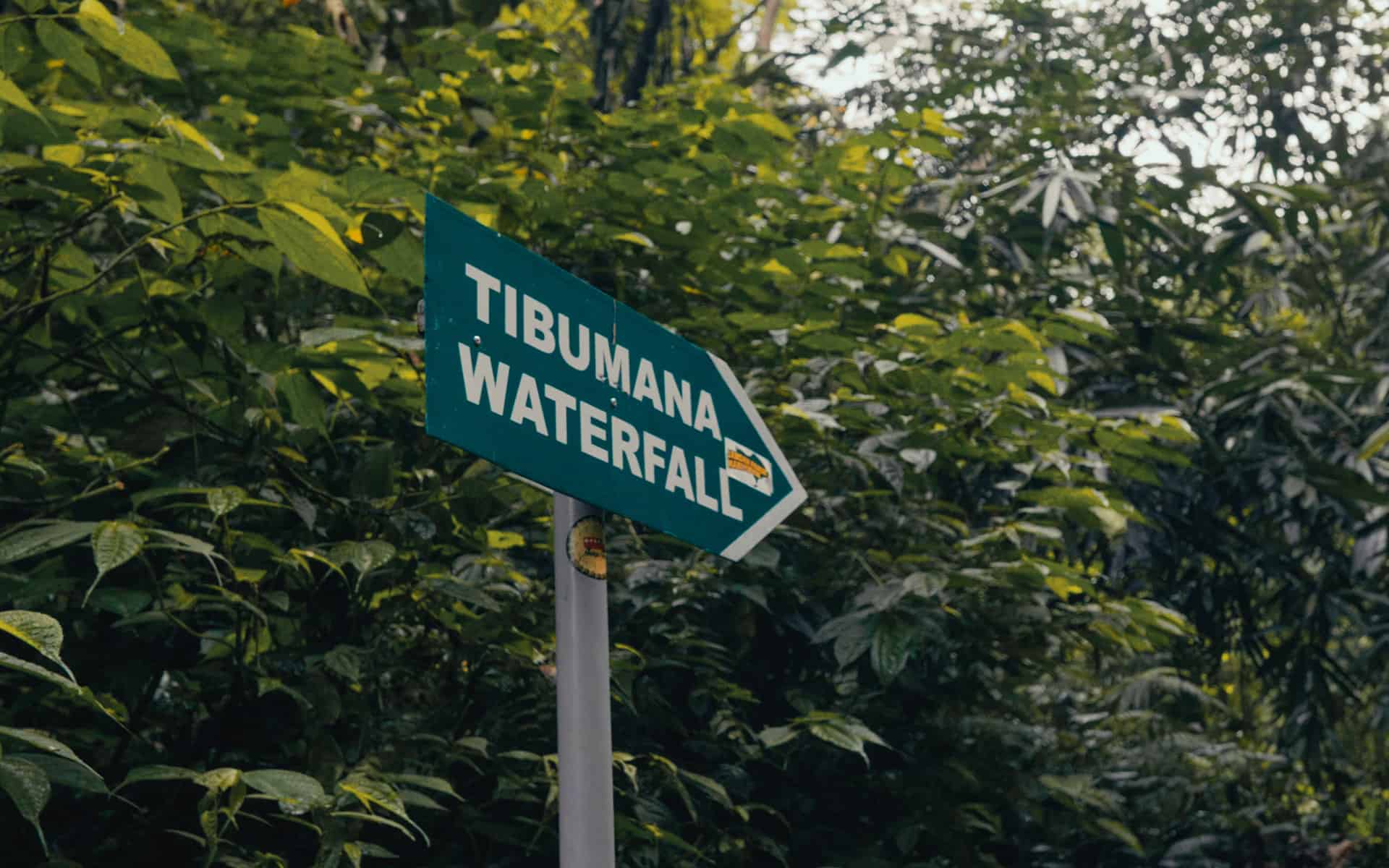 Of course you want to capture some stunning photos of your visit to Tibumana waterfall. I can give you a few advices so you won’t be disappointed. The first tip is to arrive as early as possible. Preferably around 8AM or if you can make it even earlier, the better! There are a few reasons for this. Most tourists aren’t early morning birds, so you will have the chance of only seeing another photographer, instagrammer or a local enjoying the silence before the storm.

Tibumana waterfall isn’t a hidden gem anymore, unfortunately. So if you arrive after 9AM or even later, then be prepared that you have to share this beautiful waterfall with other travelers and tourists. In 2020 we have visited this waterfall again and even saw weddings, or wedding shoots going on!!

So, if you’re coming to Tibumana waterfall to get the best photos, make sure to arrive early. Sunrise or at least early in the morning is the best timing to take the best photos. Morning light is always much better than the harsh light at the middle of the day. The shadows on the water or direct sunlight on the waterfall will blow out the whites. And shadows on the pool of Tibumana waterfall  will look a bit weird as well. As if there are dark spots which you can’t really fix with editing.

Another reason to come early, actually to any Bali waterfall there is, is because of the heat. In the morning it isn’t that humid yet, and you always have to walk some stairs before you arrive at the waterfall. Enough reasons to start exploring early! 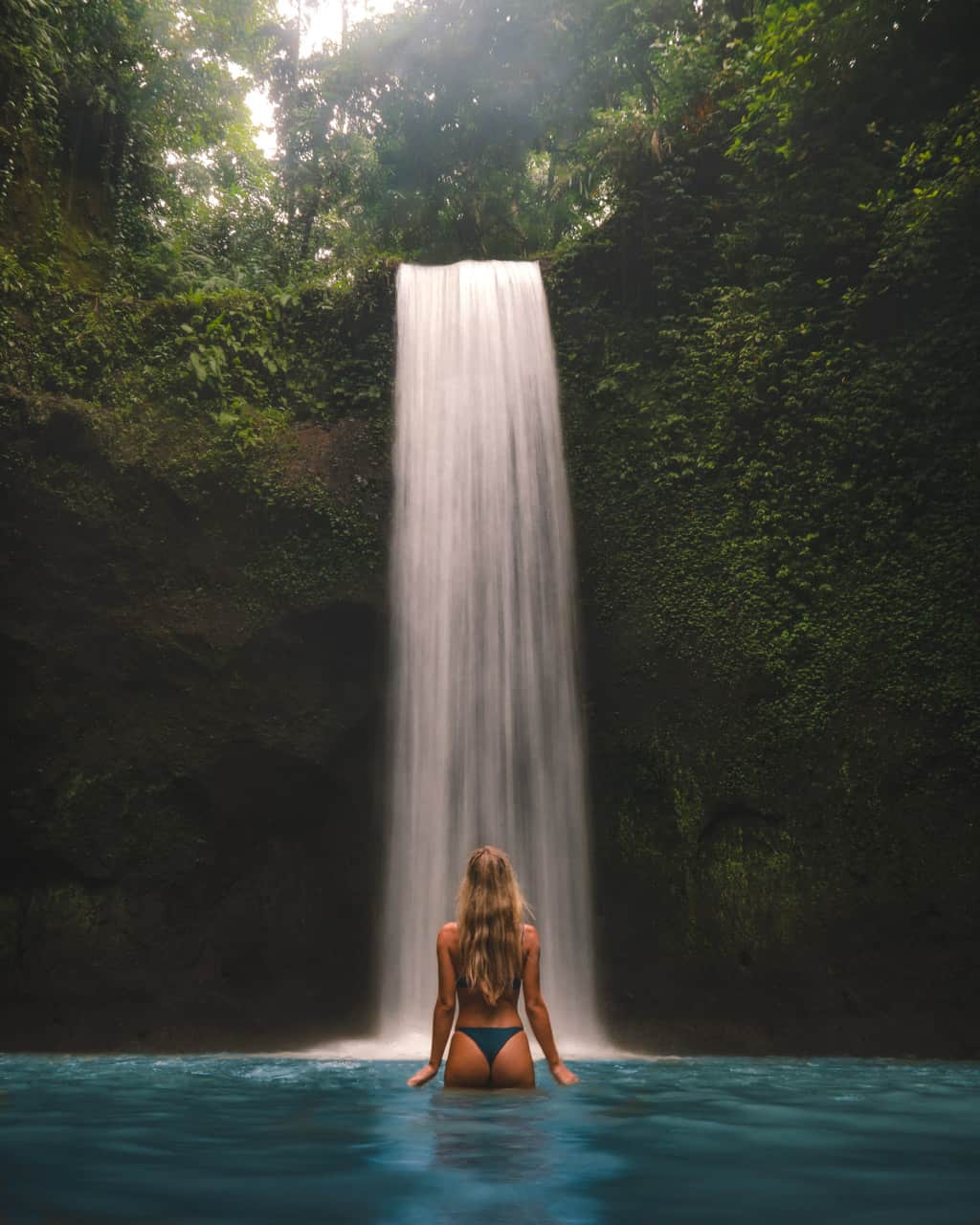 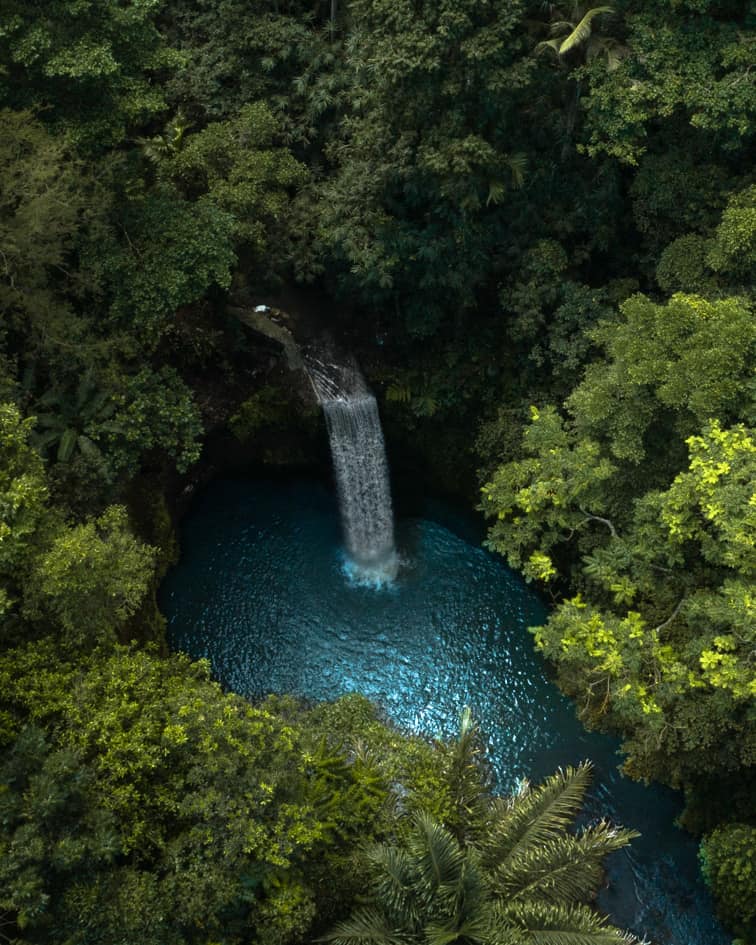 There are some really nice angles to capture the waterfall. Low by the water, from the left corner, with leaves as a foreground to create more depth, or from the right corner with some rocks and the little stream in front. At this waterfall you can perfectly practice your long exposure skills. See the different shutter speeds we used to create different results below. 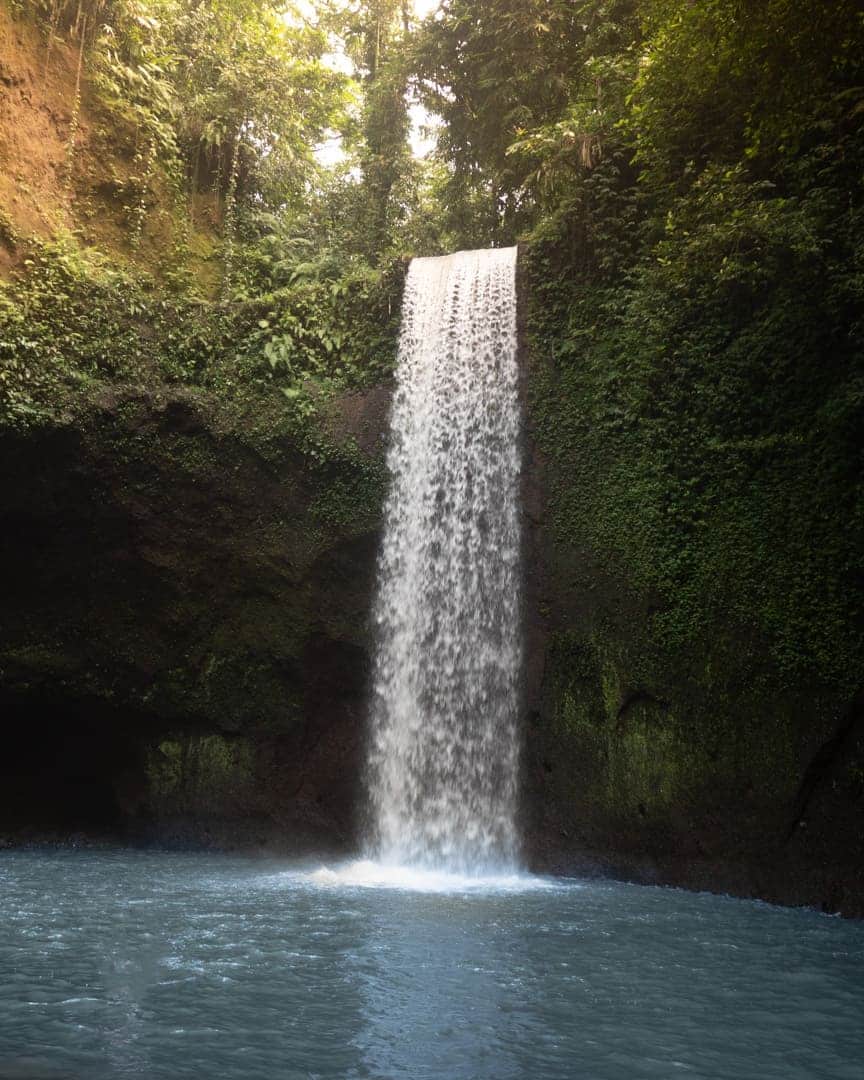 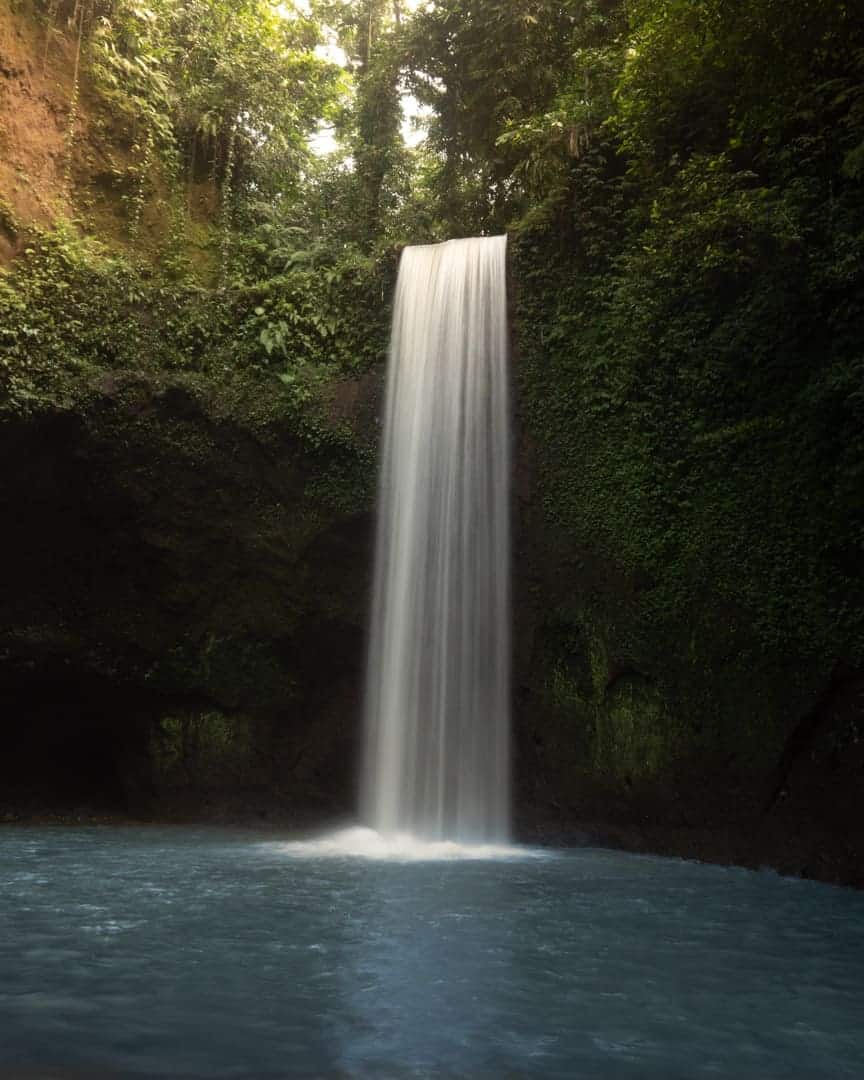 Taman Sari waterfall & natural pool is a beautiful spot located close the road and very easy to access. It has a big natural pool which is great for swimming. Because the pool is one level lower as the main waterfall, it is very safe for small kids, a perfect family waterfall. You can also climb to the upper level where the main waterfall is. There is also a small pool to relax in. 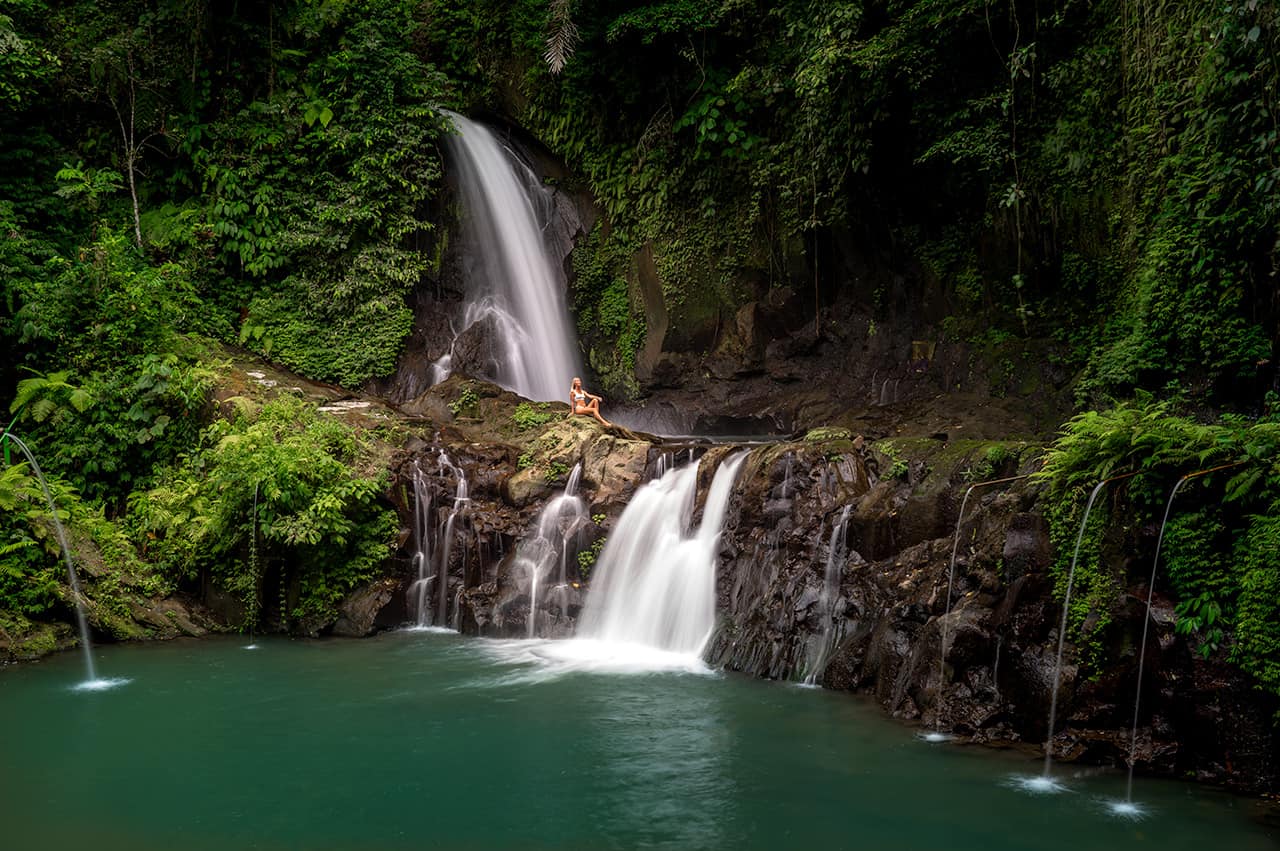 Some of the most famous and popular waterfalls in Ubud is Tegenungan waterfall. This 25 meter high waterfall is very powerful, especially after rainy season. You can swim at the natural pool of the waterfall and take some great photos. Go as early as possible to beat the crowds and to have a chance of magical morning light.

Read everything about Tegenungan waterfall in our complete guide 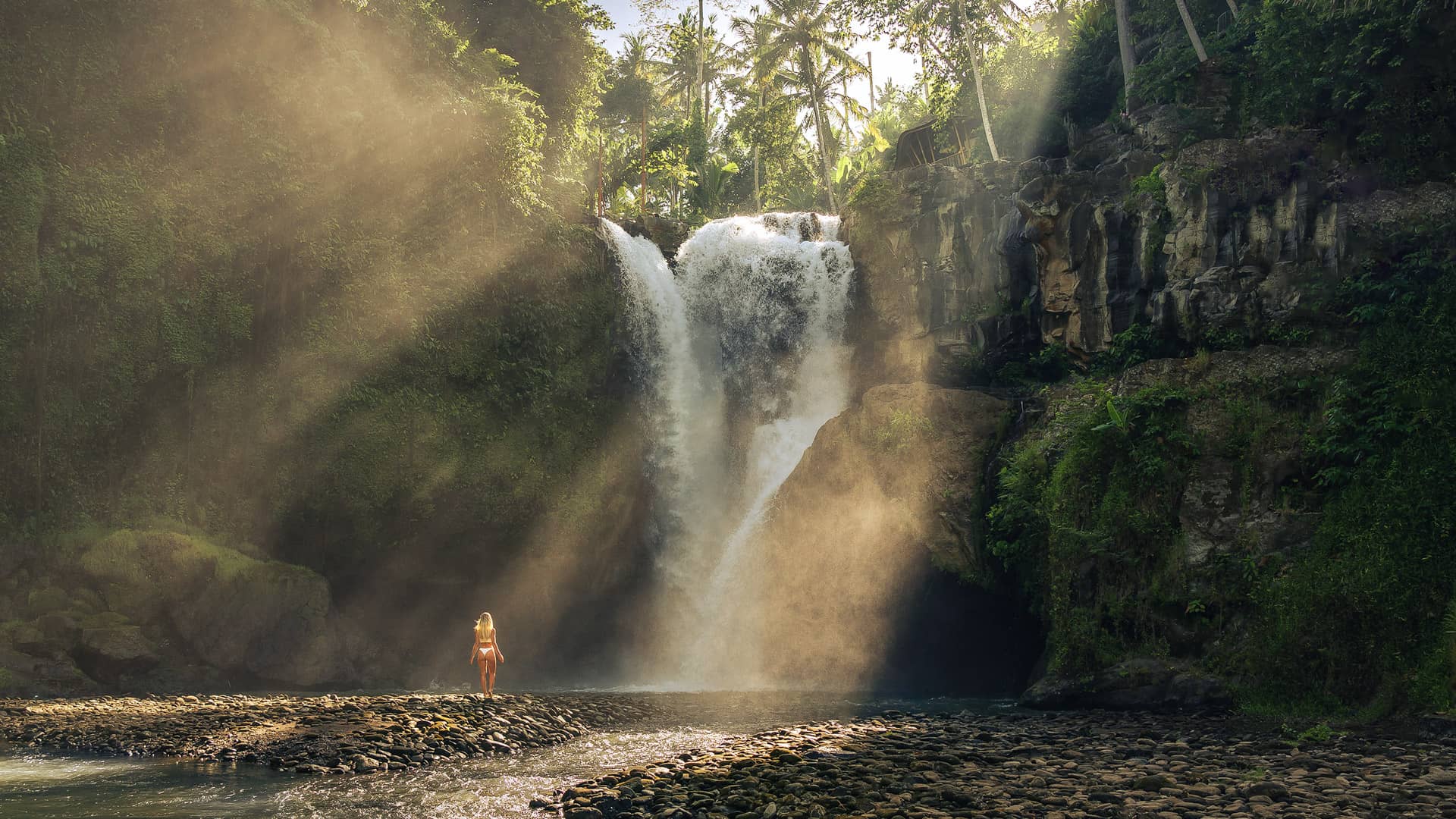 Goa Rang Reng waterfall is located along the river where Kanto Lampo also connects. This waterfall flows gently down the rock wall into the river where you can swim, so if you are with small kids this might be a great spot to safely enjoy the water. You can also explore the sacred cave which is behind the waterfall. But be careful because the rocks can be slippery when making your way up. 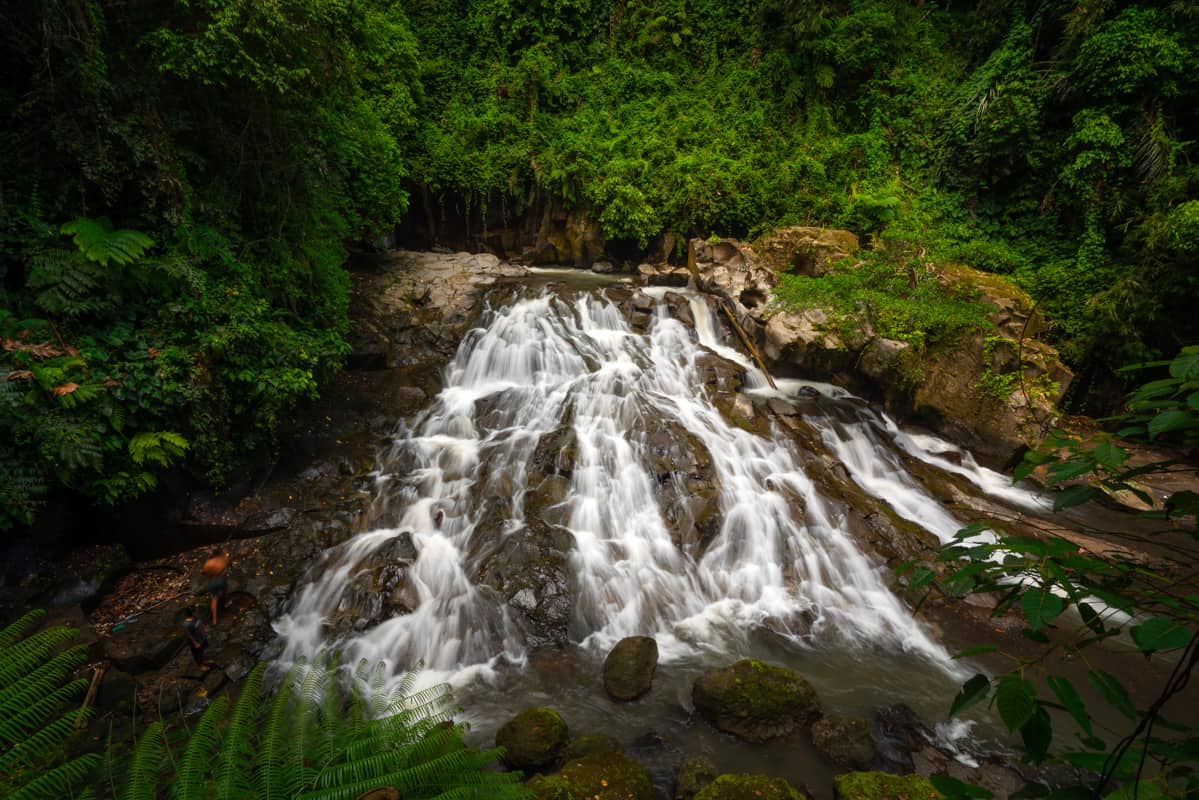 Tukad Cepung is about 50 minutes outside of Ubud centre located but totally worth the trip. Tucked away in a cave, something magical happens when the sun is shining. In the morning between 9 an 11 AM the sun will peek through the cave creating magical lightrays. Therefore it become some of the most popular instagram spots in Bali. So you can expect other tourists here, therefore make sure to be on time!

Read in our complete guide everything about Tukad Cepung waterfall 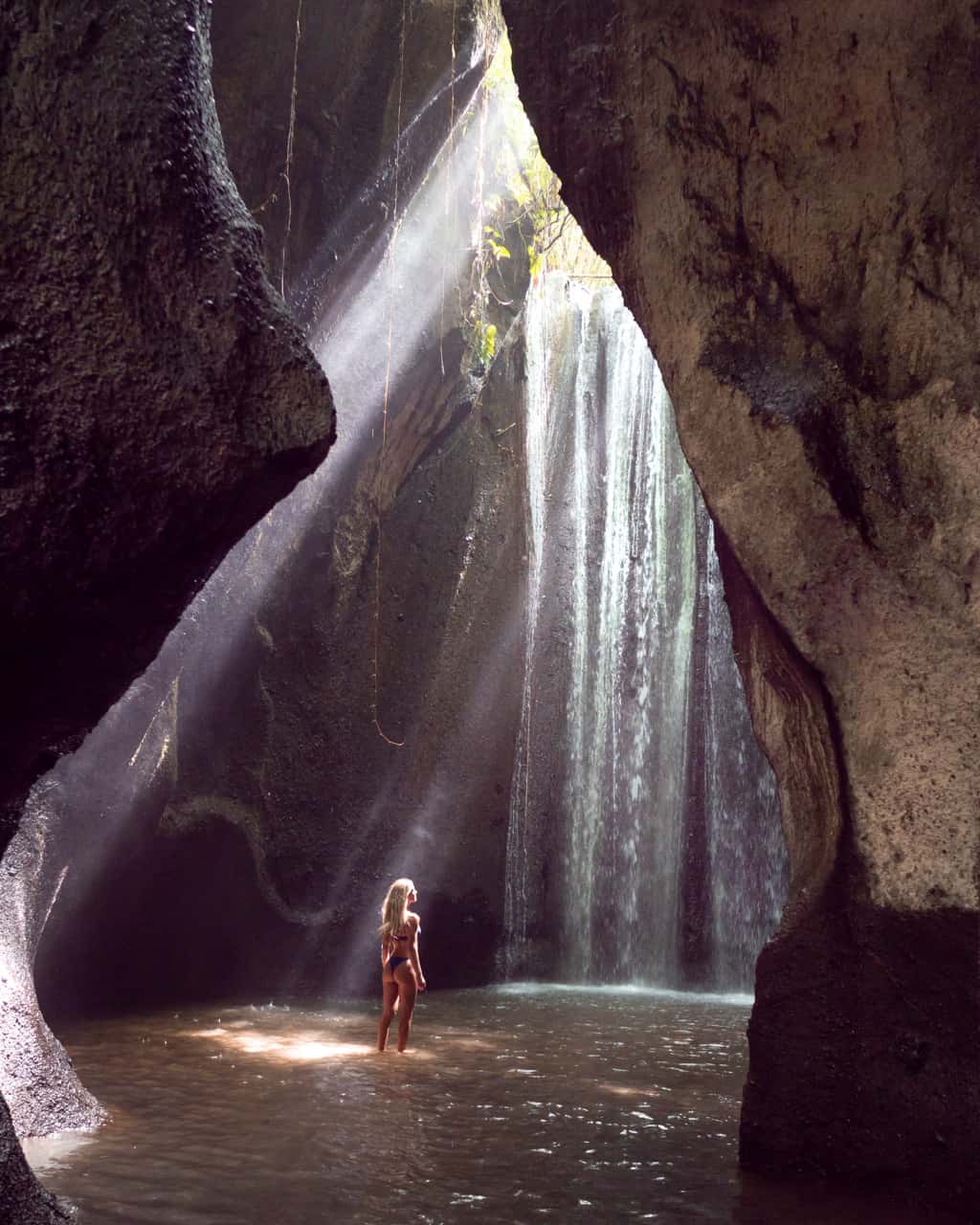 Kanto Lampo is a beautiful, photogenic multi tier waterfall near Ubud. Situated in a canyon, this waterfall seeps down the rocks into a river. It really gives you the feeling that you’re deep in the jungle of Ubud when standing at the bottom of Kanto Lampo waterfall. It’s an easy walk down the stairs and a great place to enjoy the beautiful nature of Bali. However it is not the very best place for swimming, you can still enjoy the beautiful nature and take stunning pictures at Kanto Lampo waterfall!

Read in our complete guide everything about Kanto Lampo waterfall 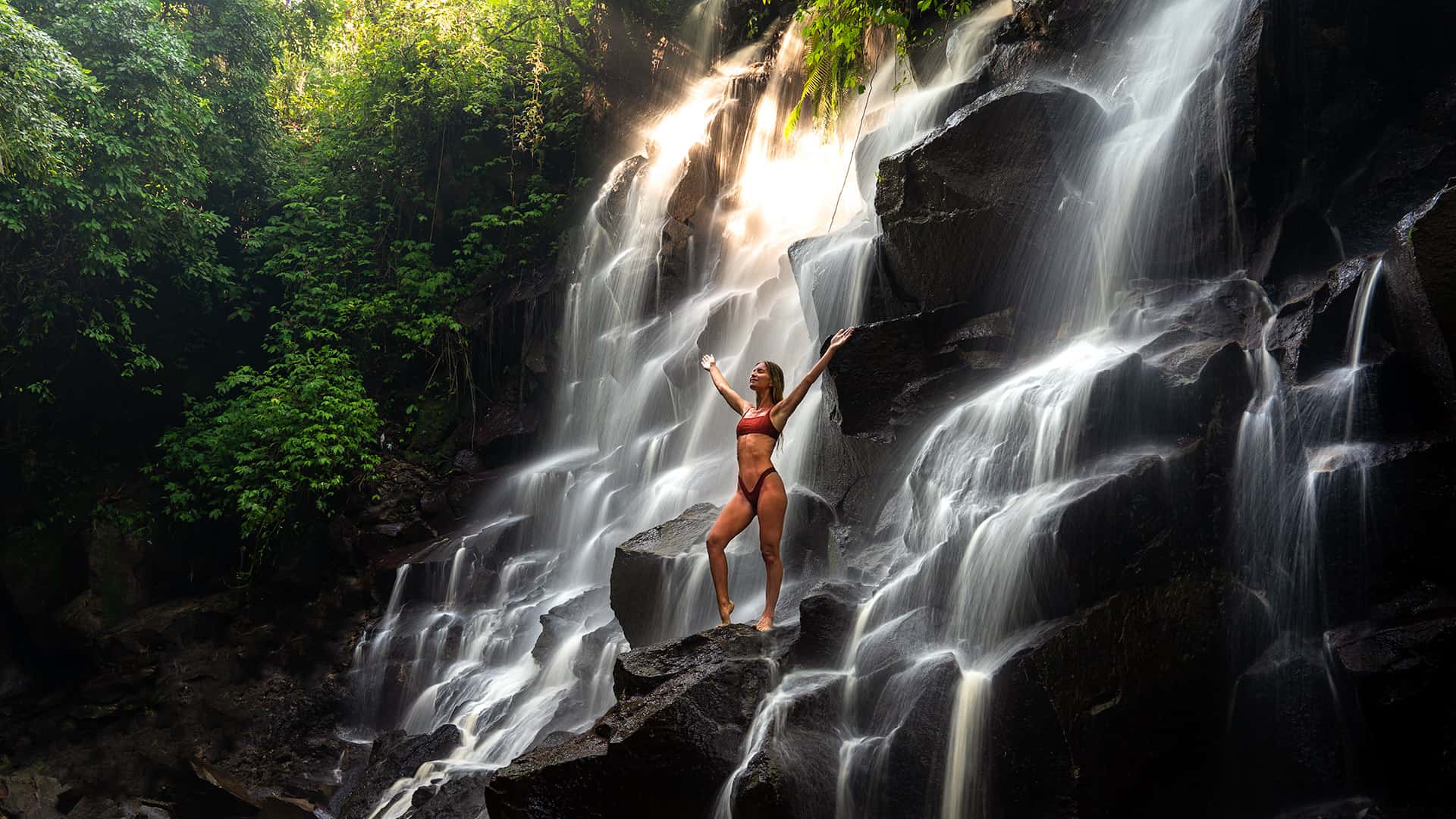 Where to stay in Ubud

Ubud has many amazing places to stay. From luxury boutique hotels to big jungle resorts and guesthouses around Ubud. Most of the accommodations are super nice and clean! But if you really want to spoil yourself for a special occasion, it is highly recommend to book a luxury accommodation with rice terrace view or jungle view in Ubud. Below some of our recommendations.

Luxury: Goya Boutique, Hanging Gardens, Adiwana resort and Kayon resort to name some of the amazing luxury resorts around Ubud.

Mid-luxury: A 3 star accommodation in Bali is already great luxury for the price. For example Hotel Green field.

Backpacker: A cheap Airbnb or a guesthouse like Pering Bungalow.

We hope you enjoyed reading our blog post about Tibumana waterfall Bali and will put this beautiful waterfall on your Bali itinerary. Because there are so many waterfalls around Ubud, you can easily make a full day trip chasing waterfalls as you can combine a few waterfalls all in one day. For example the hidden Tukad Cepung waterfall, Tegenungan and Sumampan waterfall. With the help of our blog posts you can make your own waterfall tour day trip near Ubud!

If you have questions please let us know in the comments!

Read more about the best and most beautiful Bali waterfalls here.

For all our separate guides about the Bali waterfalls, head over to these guides: