How to get to Veu da Noiva waterfall viewpoint

The Véu da Noiva waterfall viewpoint is located along the road and easy to reach with the car. It’s a 40 km drive from Funchal and you can easily combine the waterfall viewpoint with a visit to Seixal Beach, the Seixal Natural Pools or Porto Moniz. There is a parking lot for a few cars with a tourist shop next to it. The accessibility to the viewpoint is even wheelchair friendly with a ramp to the viewing platform.

Book here your Madeira tour including guide and visit to Seixal 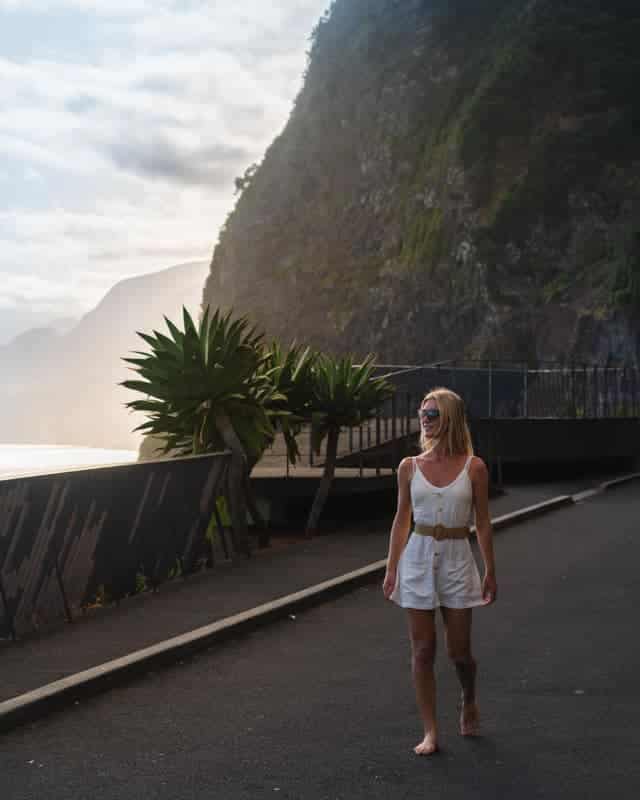 The viewpoint is open 24 hours and there is no entrance fee asked just like many other (nature) tourist attractions in Madeira. Because the viewing platform is facing north east, you can see a wonderful sunrise here. During the morning and early midday the sun shines directly on the cliffs lighting up the waterfall. In the late midday and evening, the sun disappears behind the mountain which makes the cliff corner where the waterfall is located a bit dark. So for photos the best time to go the Véu da Noiva waterfall viewpoint is around sunrise or right after. Later in the morning the light is a bit harder and shines from the side onto the waterfall which makes it a bit more difficult to capture the waterfall in its glory.

In terms of the best season to go to the waterfall it depends on the rainfall. After rainy season there is more chance of seeing the waterfall in full glory with a powerful stream. But after the summer season with less rainfall, the waterfall might be a bit underwhelming in power. Nevertheless, there will always be some water flowing down no matter the season. 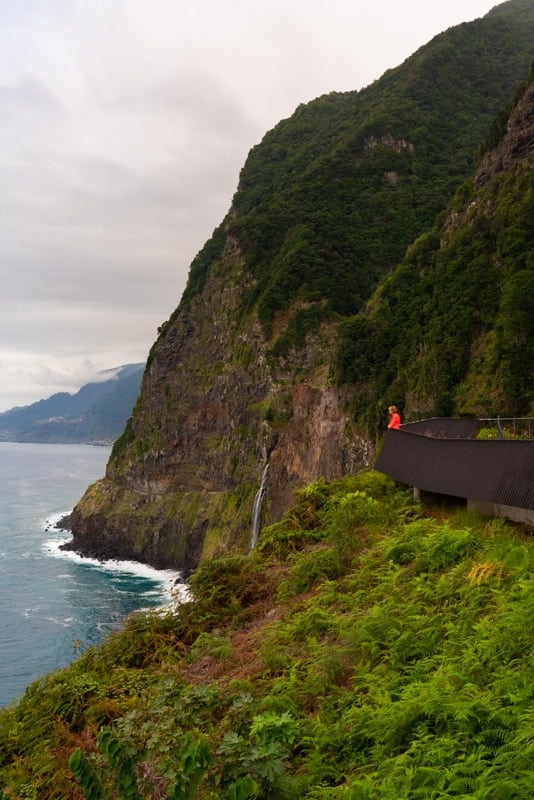 What to expect at Veu da Noiva waterfall viewpoint

The Véu da Noiva waterfall viewpoint has a beautiful viewing platform from where you can see the impressive waterfall flowing down into the Atlantic Ocean. The waterfall is called Bride Veil because of its form as a white veil that brides traditionally wear during a marriage ceremony. The Bridal Veil has a height of about 30 meters and flows gently down the mountain into the ocean. The impressive coastline with the beautiful waterfall is an incredible sight and totally worth the stop in you’re exploring the Seixal area. 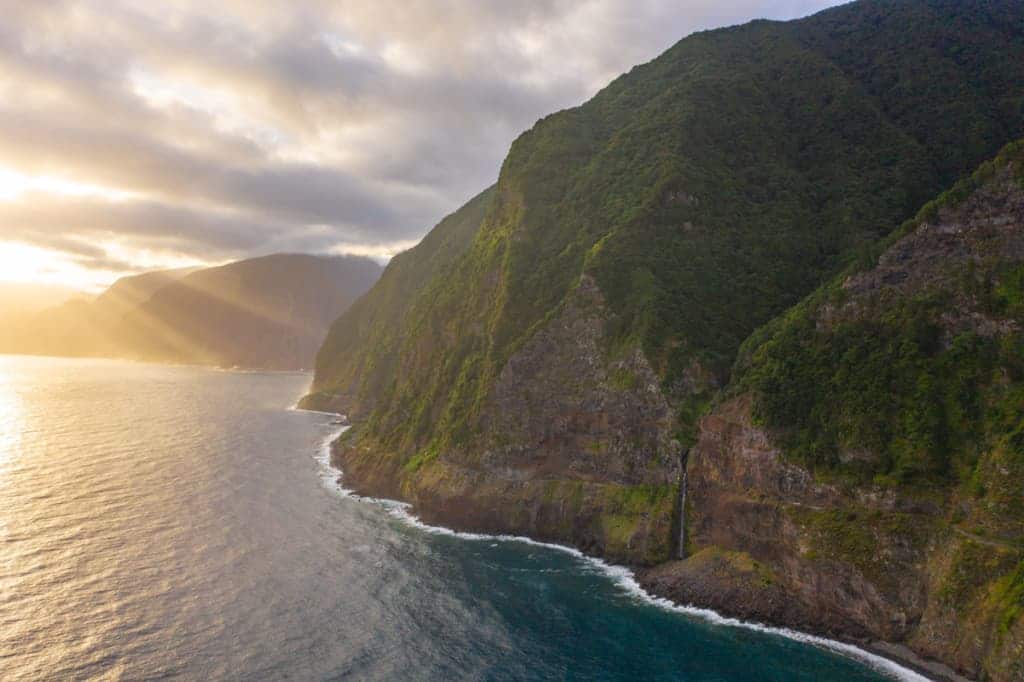 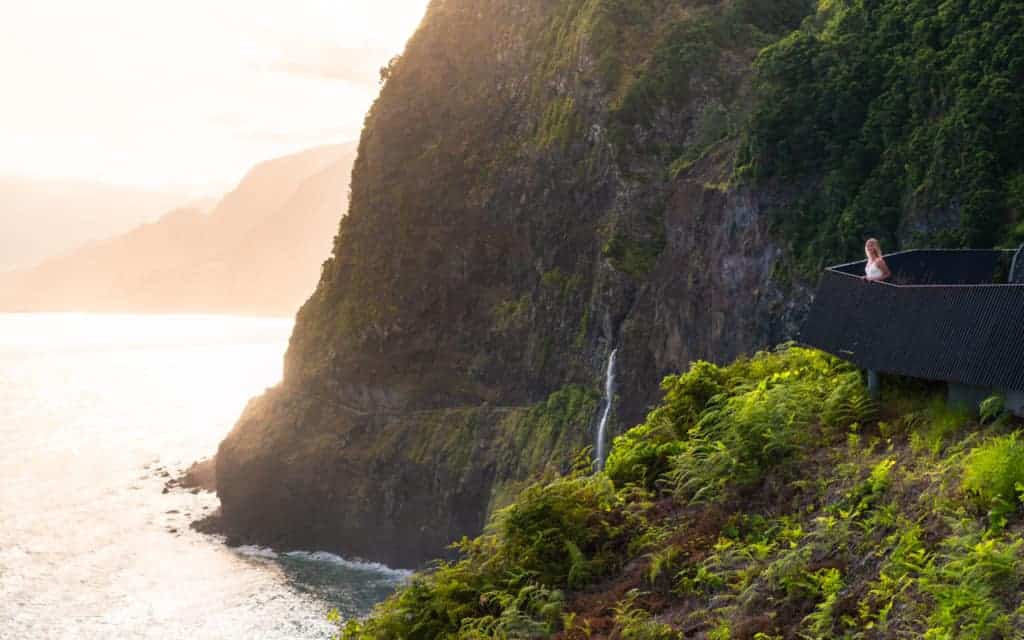 You will see a pile of gravel below the waterfall which are the remains of a landslide which happend in 2008. Unfortunately this nature disaster caused a lot of damage to the cliff side path which is closed now. Originally this path was leading towards the waterfall from where you could admire it from closeby. But now the path is closed, the only and safest way to view the Bride Veil waterfall is from the Veu da Noiva waterfall viewpoint. Next to the platform of the viewpoint is a small garden with a few beautiful flowers and plants which are particularly in bloom during spring. Next to the parking lot you will see a tourist shop with souvenirs and other fun things.

Other things to do near Veu da Noiva waterfall viewpoint

The Seixal Natural swimming pools are well worth a visit and just like Seixal Beach a great place to watch the sunrise. This collection of natural lava rock pools is a great spot to hang out for a few hours. You can explore many things here such as the caves, rock arches and different natural pools. Bring your swimwear and enjoy this beautiful nature phenomenon! On a calm day the water inside the pools is perfectly still creating a beautiful reflection of the clouds, if there are any in the sky. These are the safest circumstances for swimming as there won’t be any waves crashing over the pool. But be aware on windy days with bigger waves. A dangerous situation might occur when the waves crash over the edge of the natural pools.

Read everything about the Seixal Natural Pools in this complete guide 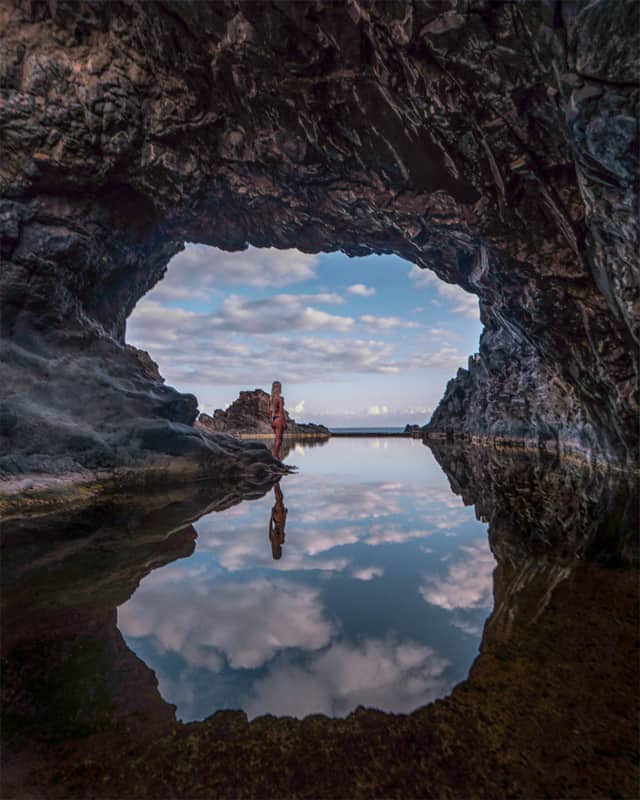 Another beautiful location to visit close to the Véu da Noiva waterfall viewpoint is Seixal Beach. You can see the beach from the viewing platform if you look to your left. Seixal Beach is one of the best beaches in Madeira and has an impressive backdrop with towering lush green cliffs that drop straight into the ocean. The black sand beach is a fun place to hang out for a day. You can even learn surfing on the waves here or just enjoy the sunshine and beautiful view. In the far distance you can see the Bride Veil waterfall flowing into the ocean.

Read more about Seixal Beach in this complete guide 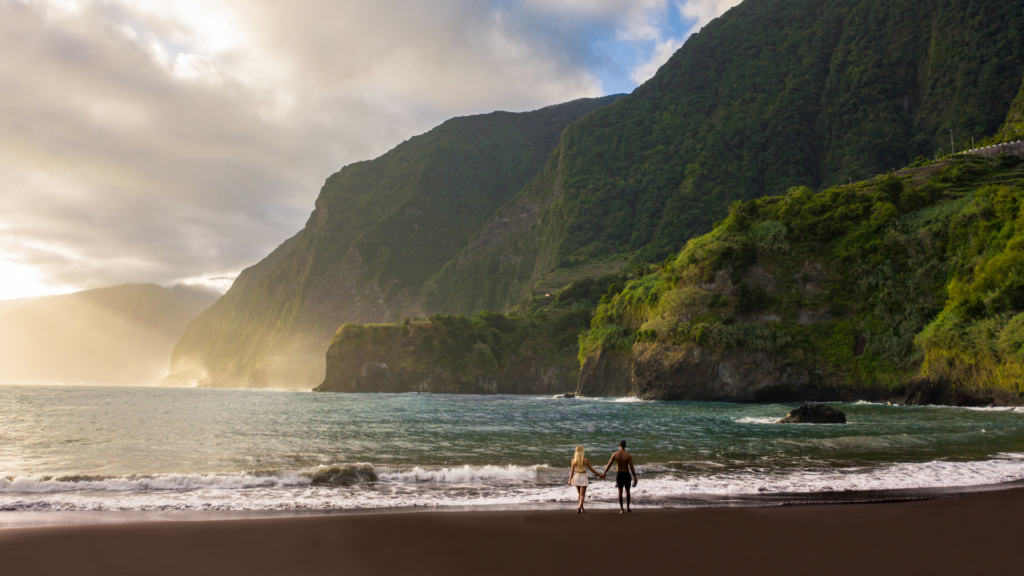 We hope you enjoyed this blog post about the Veu da Noiva waterfall viewpoint.

For more inspiration about the best things to do in Madeira, head over to our other blog posts.