VEREDA DO LARANO COASTAL HIKE IN MADEIRA – The Complete Guide

The Vereda do Larano hike along the east side of Madeira turned out the be our favourite coastal hike on the island. This easy but beautiful cliff side trail offers some amazing views on the rugged coastline with impressive vertical cliff drops into the ocean. Besides these impressive coastal views you’ll also pass waterfalls and walk through the forest. There are a few options to do this hike with the official route leading you from Levada do Caniçal to Vereda do Larano with Porto da Cruz as finish point. This is 13 kilometre one way with the 5 kilometre Vereda do Larano trail as highlight. The other 5 kilometres along the Levada do Caniçal is reported being quite boring. So to skip this part you can choose to only hike along the Vereda do Larano out and back starting from Larano in Porto da Cruz. Read in this blogpost everything you need to know about the Vereda do Larano hike and the different ways to do this coastal hike.

Before setting off to the Vereda do Larano, below some key facts! Take into account that you can do different variations of this hike, which is officially a 13 kilometre point to point hike. This means you either have to hike the same way back to the car, adding an extra 13 kilometres, OR you order a taxi to bring you back to your car in Machico. However what we did was shorten the hike and start in Larano, Porto da Cruz at the cable car. From there we walked towards Boca do Risco viewpoint and then back to this parking. This part of the hike is only about 5 kilometres and the most beautiful part of the trail along the coast. After exploring Boca do Risco you can hike the same 5 kilometres back to your car, but with different views as you came! 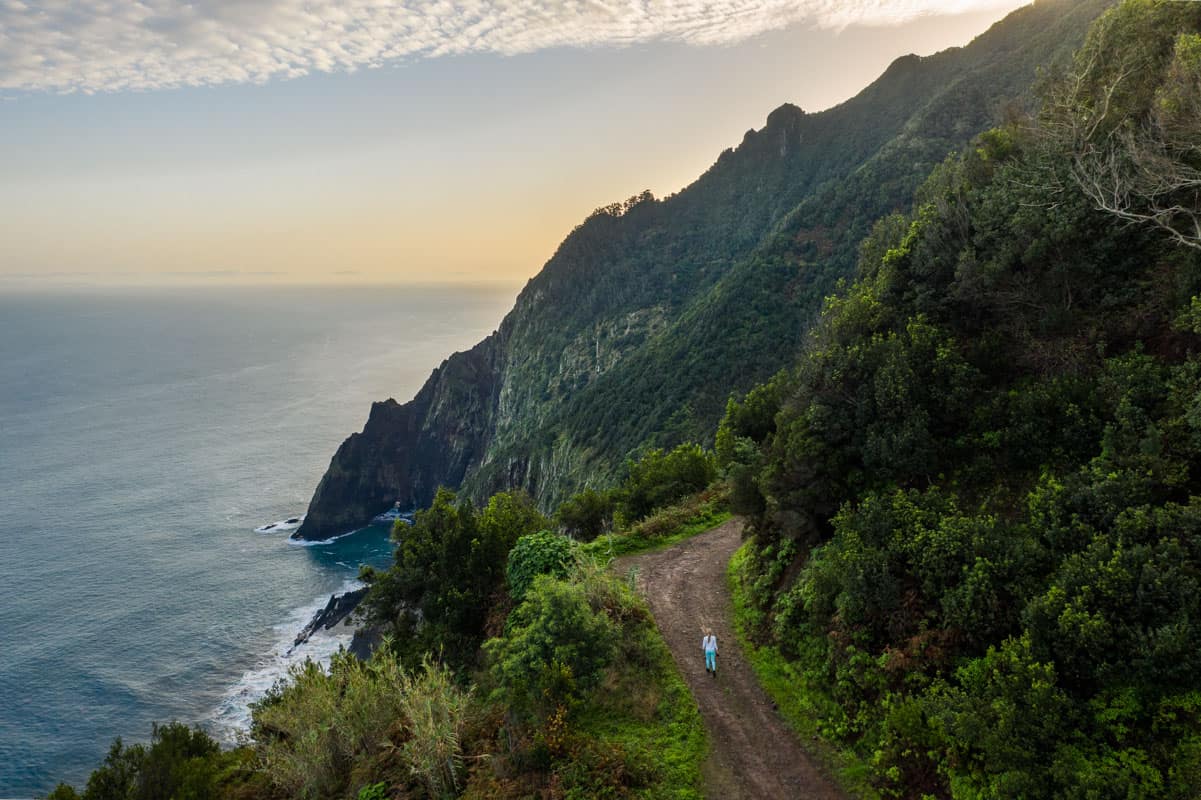 With the explanation of above now you know there are different versions of this hike possible, all with a different distance and duration. From Machico, Levada do Caniçal to Vereda do Larano with Porto da Cruz as finish it will take you about 4-5 hours one way. If you take a taxi in Porto da Cruz back to Machico it will cost you about 10 euros. Of course you can also hike back to Machico, but this will add another 13 kilometres and about 4 hours. So what we did instead, was starting in Larano, Porto da Cruz at the cable car. With this we skipped the ‘boring’ levada part and walking on the road towards Porto da Cruz. From this starting point in Larano towards Boca do Risco it is 5 kilometres one way which took us about 2,5 hours with lots of photo stops along the way.

The Vereda do Larano coastal hike is mainly flat but with a little incline at some parts. The trail is quite well maintained with safety railings along most of the path. Some parts are a bit narrow, but nothing dangerous or to be scared about. We met plenty of other hikers along the way, varied from young families to some older hikers. What you always should be careful about are landslides. They happen quite often in Madeira, especially after heavy rain. Which is what we experienced when doing this hike after days of rain. We came across two different piles of soil and rocks that has been falling down along the mountain with rain. This is not to scare you at all, just to make you aware of natures power and to always keep your eyes and ears out during hiking. 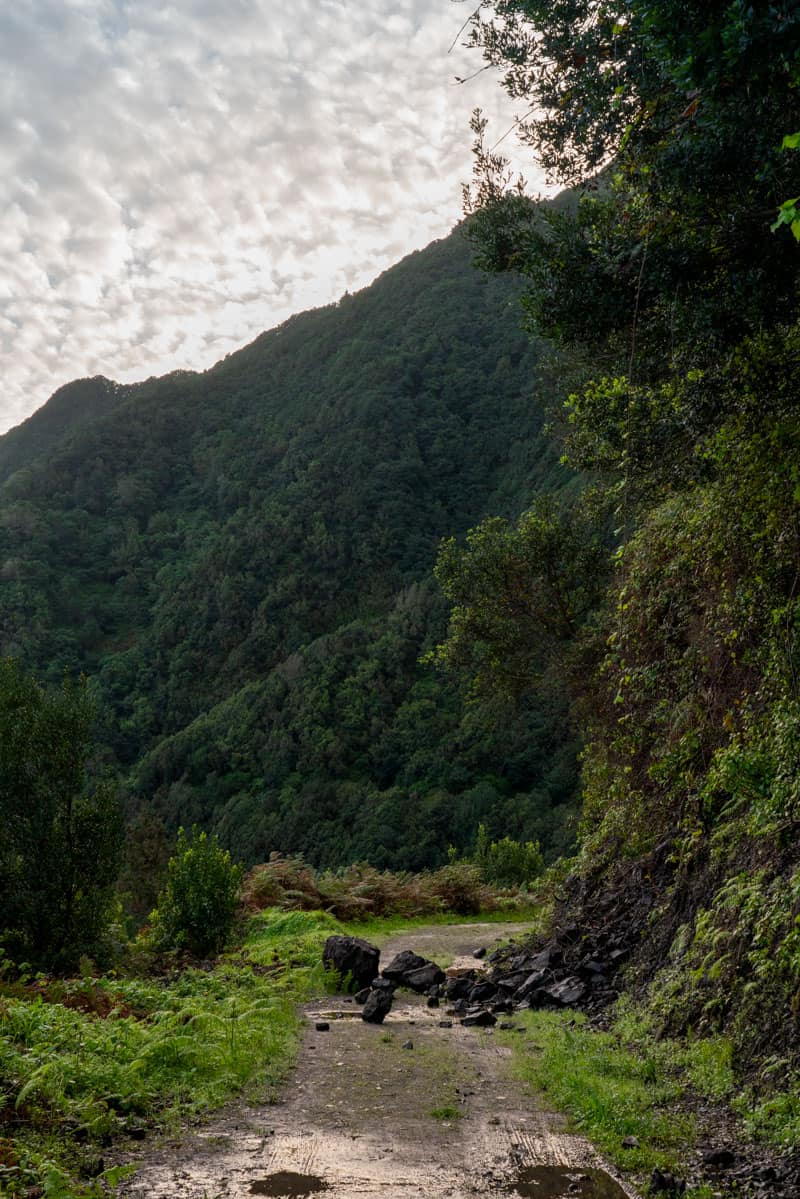 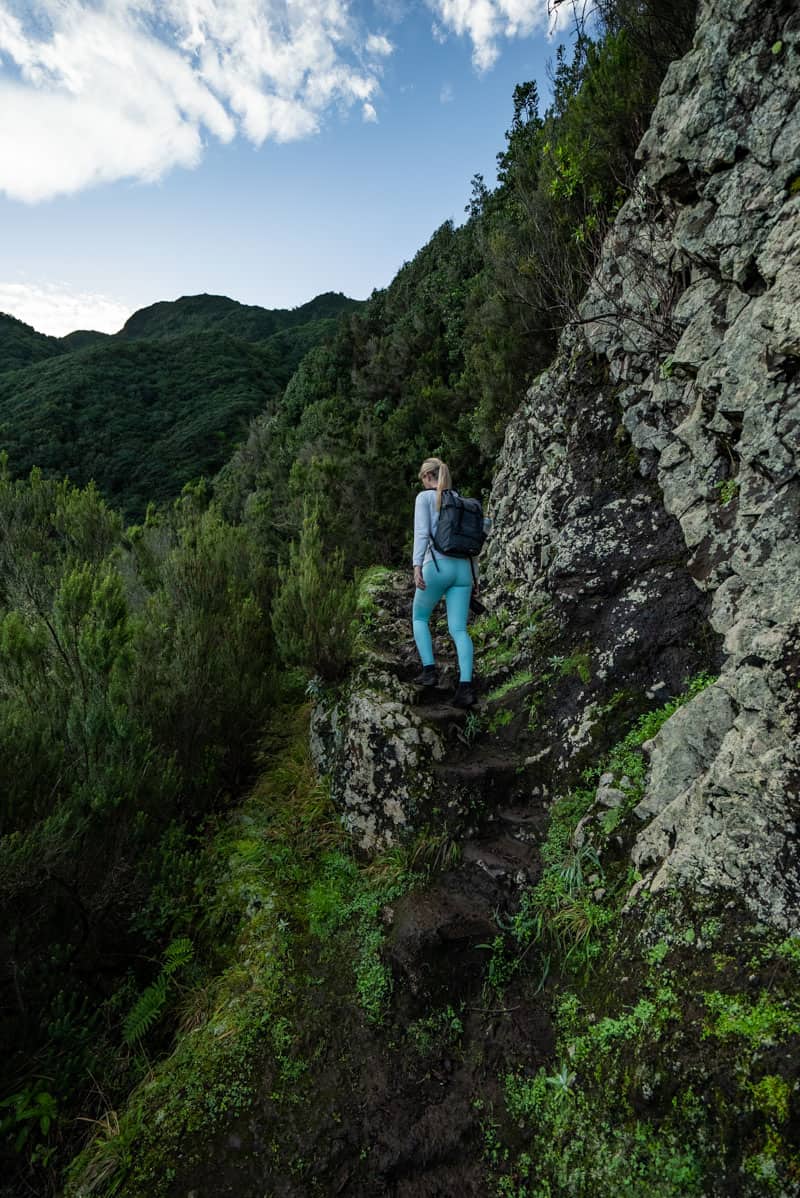 How to get to the Vereda do Larano hike

This totally depends from which side you want to start hiking the Vereda do Larano trail. As said in the introduction, you can choose to do the whole hike starting in Machico. This will take you along the Levada do Caniçal to Vereda do Larano with Porto da Cruz as finish point. A total of 13 kilometres one way, so you either have to hike 13 kilometres back to your car in Machico, or call a taxi to bring you back.

However what we did was starting in Larano, Porto da Cruz, at the cable car so you’ll skip the ‘boring’ part along the levada. This gives you immediate access to the most beautiful part of the trail along the coast and makes it easier to return to your car. Below a screenshot of the exact place you need to go to start your hike at Larano. The arrow is where we had parked the car and where the trail of Vereda do Larano starts. 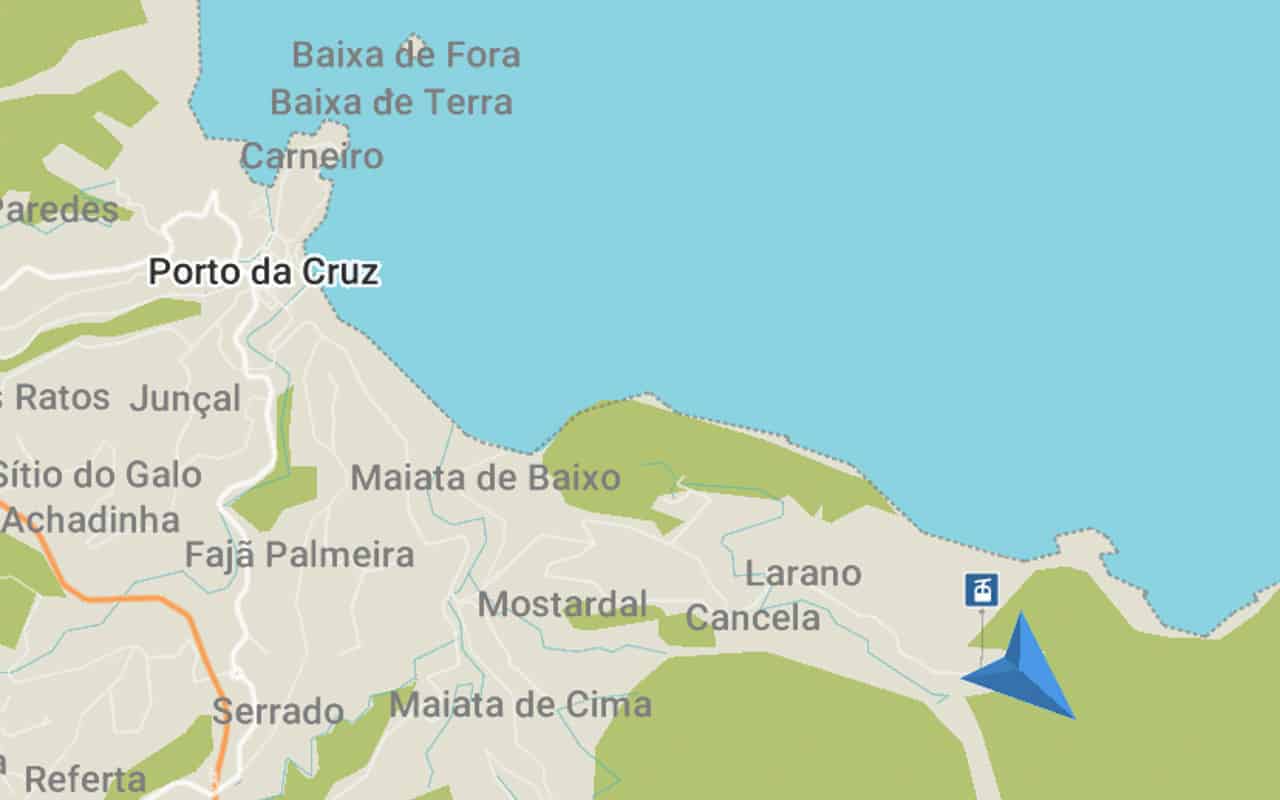 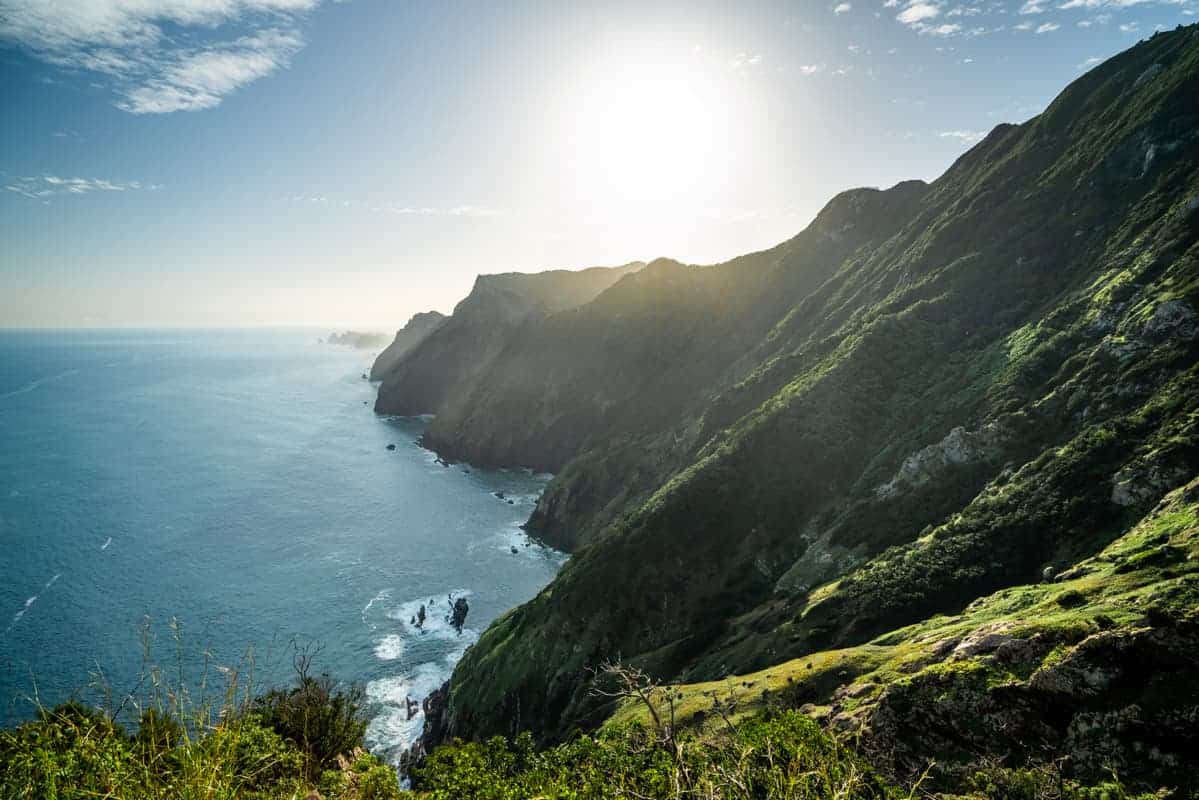 Best time to do the Vereda do Larano hike

Located on the north eastern part of the island, Vereda do Larano is a perfect hike for the mornings. Depart as early as you can and enjoy the first sunlight of the day along this trail. The later you’ll start this hike, the more you’ll be walking in the shade. For very hot summer days maybe better, but personally we always prefer to hike in the morning. Take into account that after heavy rainfall the waterfalls along this hike might overflow the path a bit. 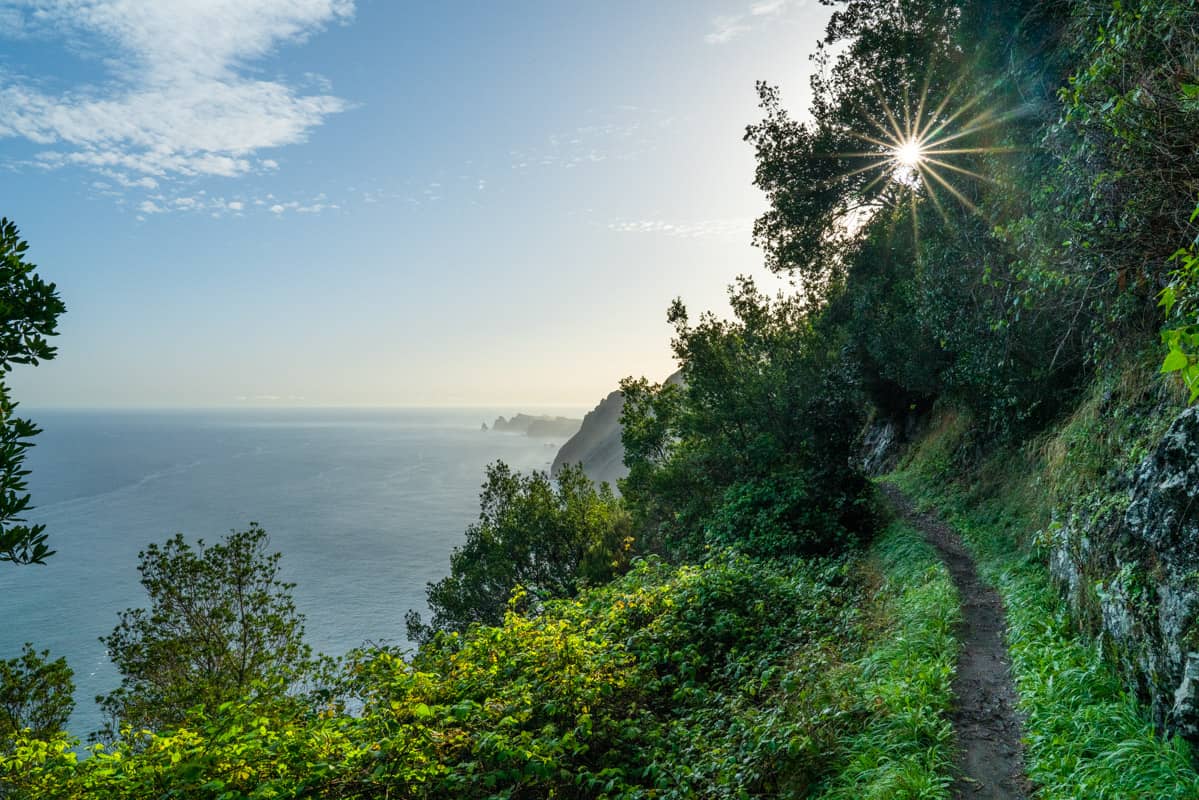 What to expect during the Vereda do Larano hike

As mentioned earlier in this post, you can start this trail from two different sides. From the tunnel in Machico where you follow the Levada do Caniçal to Boca do Risco viewpoint, and then join the coastal trail towards Porto da Cruz. Or start in Porto da Cruz, Larano, and join directly on the best part of the Vereda do Larano along the coast. Which is what we did in the early morning light.

From the road near the cable car in Larano you join from a wide dirt path onto the narrower coastal trail. If you’re lucky the highest peaks of Madeira are visible in the back which was the case when we did this hike. It was incredible to see Pico do Arieiro and Pico Ruivo clearly from this distance. Check out the photos below. 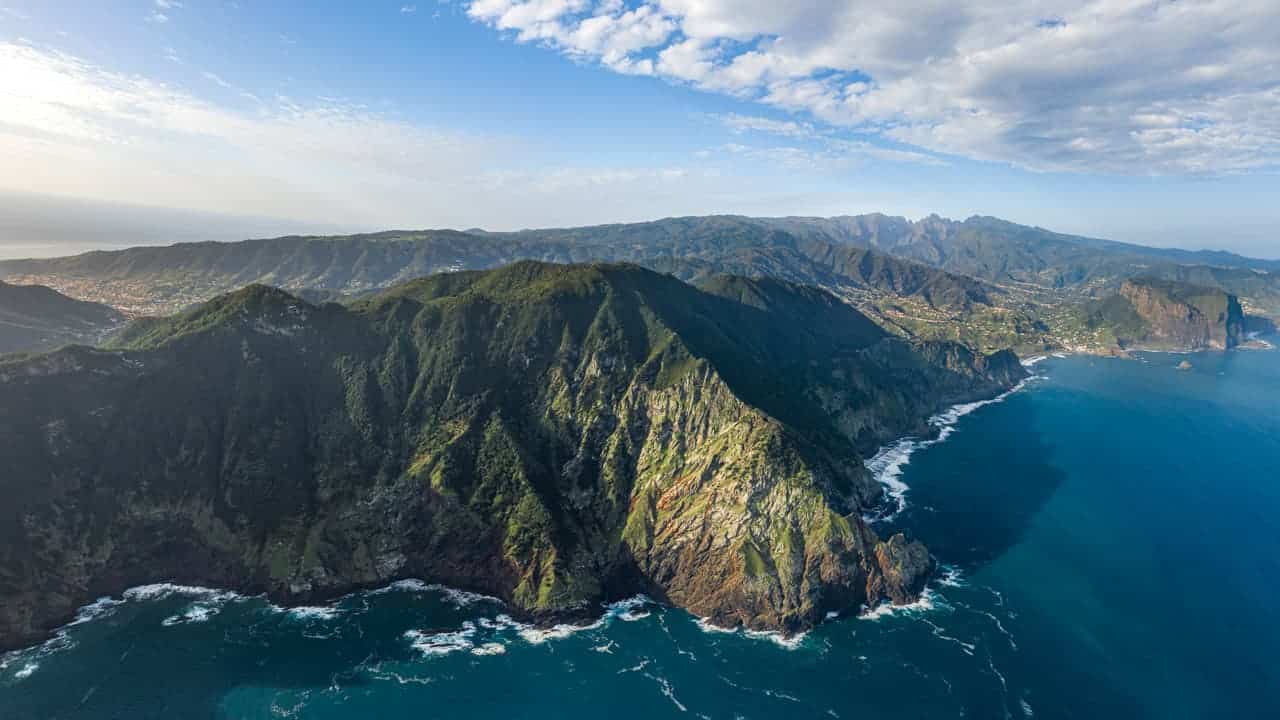 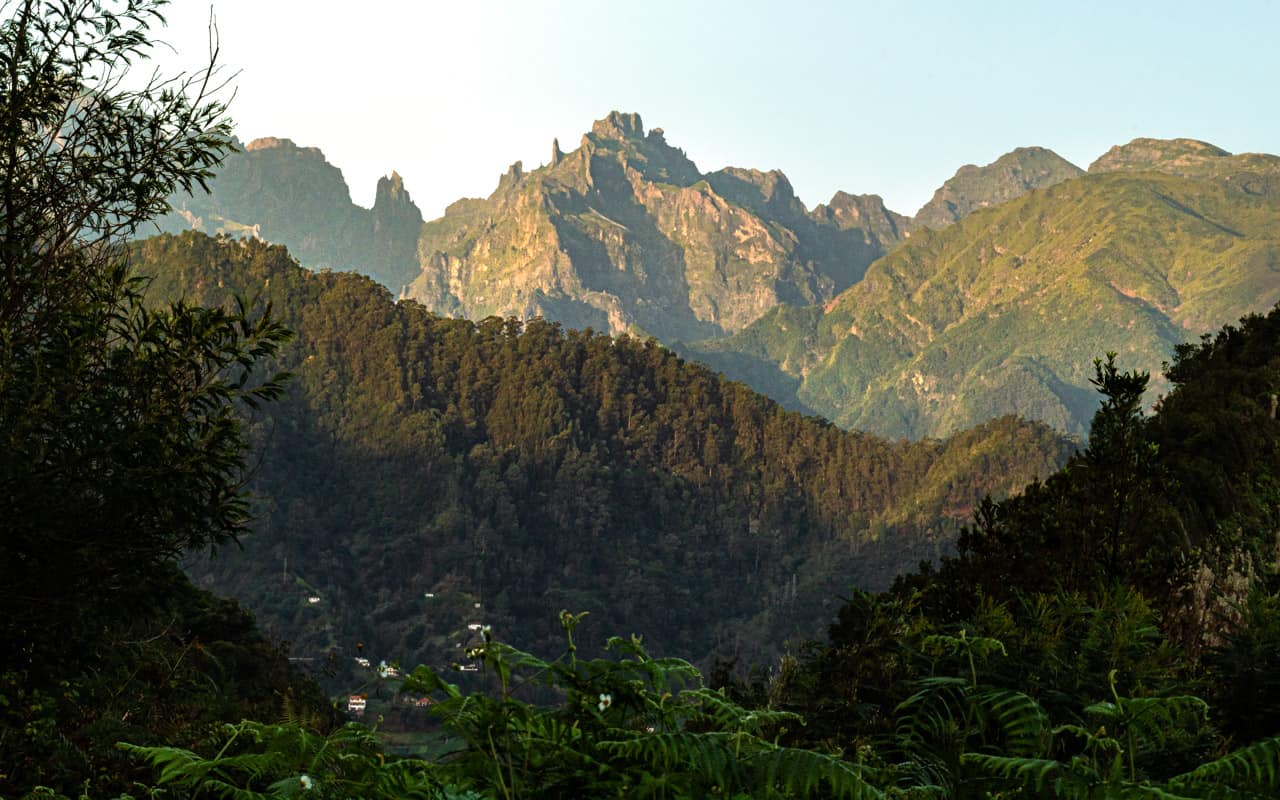 Incredible coastal views on the Vereda do Larano

The trail follows along the coast with incredible views on the rocky cliffs. On a clear morning you can look all the way towards the rocky outcrops of Ponta da São Lourenço. This is one of the reasons why we recommend to do the Vereda do Larano hike from Porto da Cruz to Boca do Risco. In combination with the soft morning light this creates amazing photo opportunities! 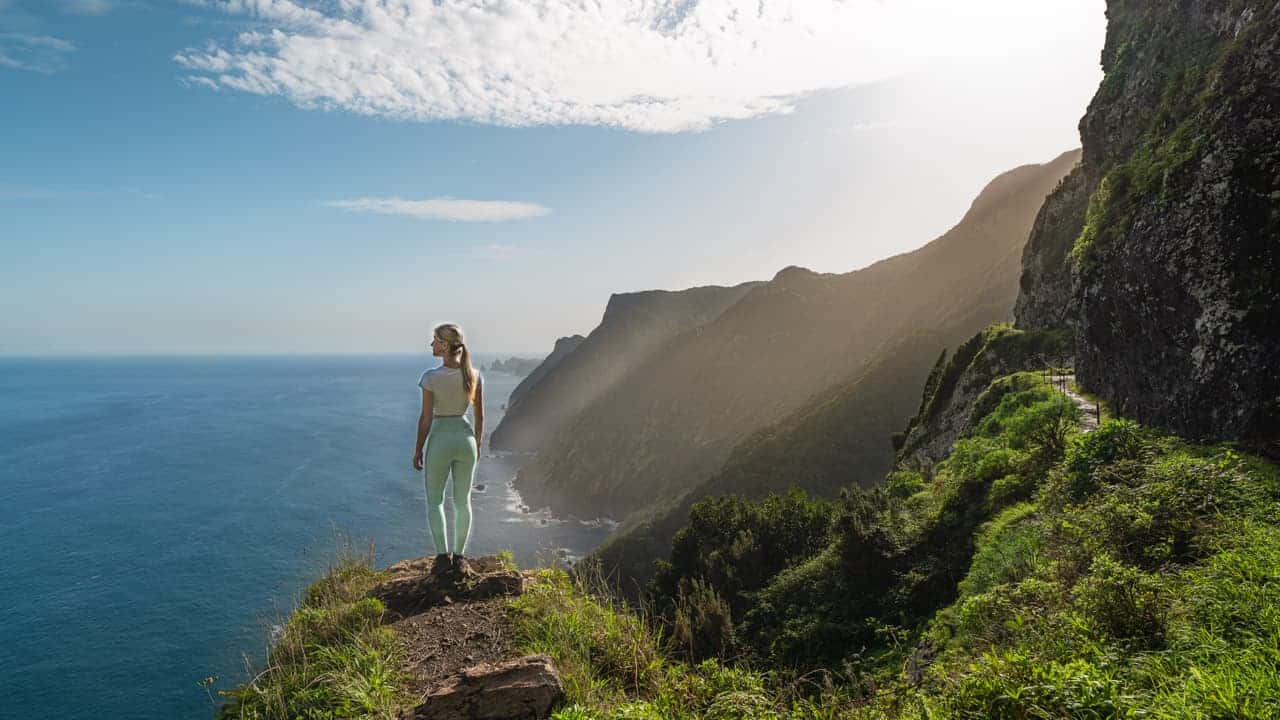 The trail of Vereda do Larano varies during the hike from dense forest to an exposed cliff edge trail. Despite a few sections along the trail miss a safety railing, the path felt safe for us all the way along the hike. 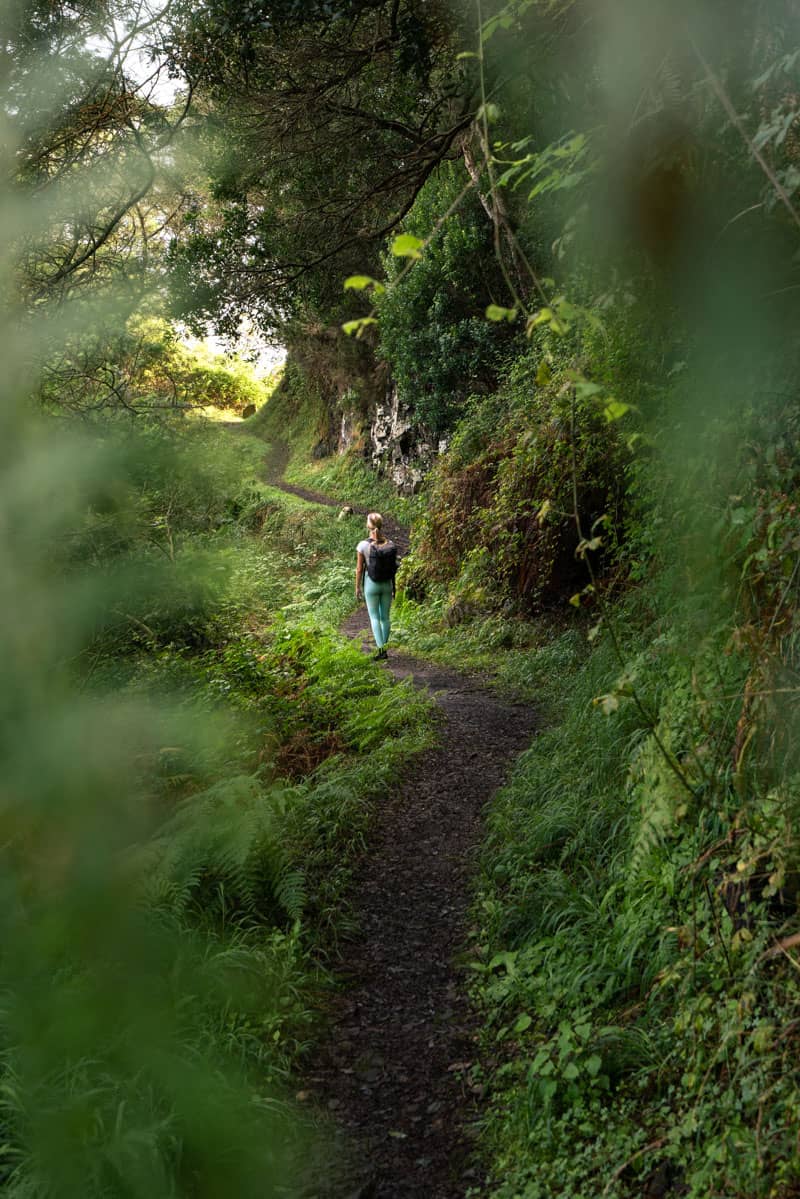 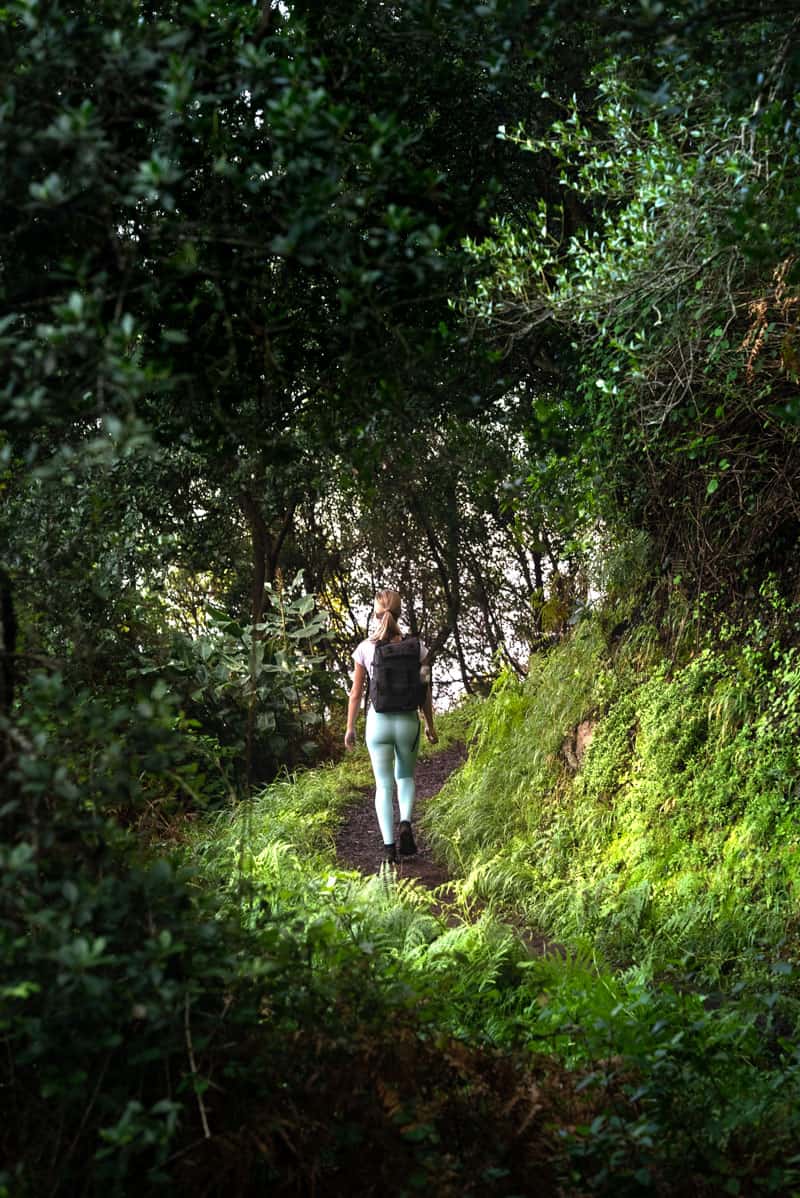 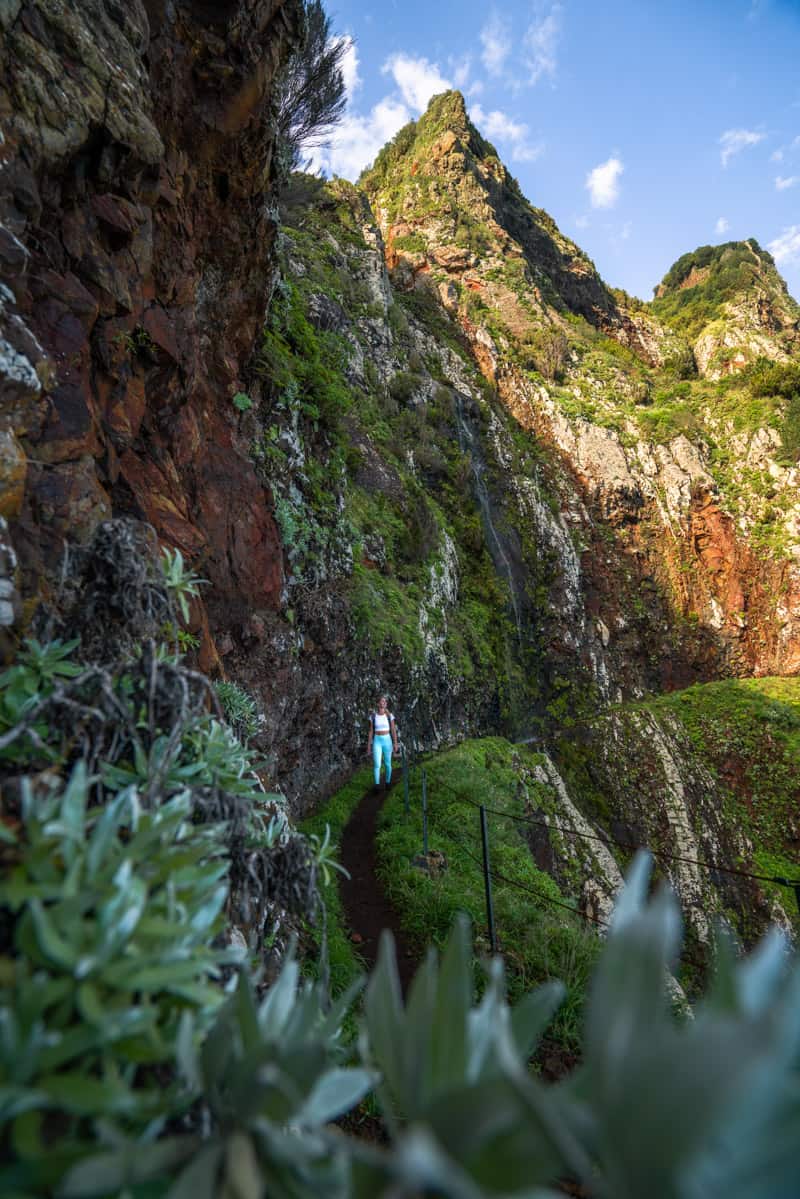 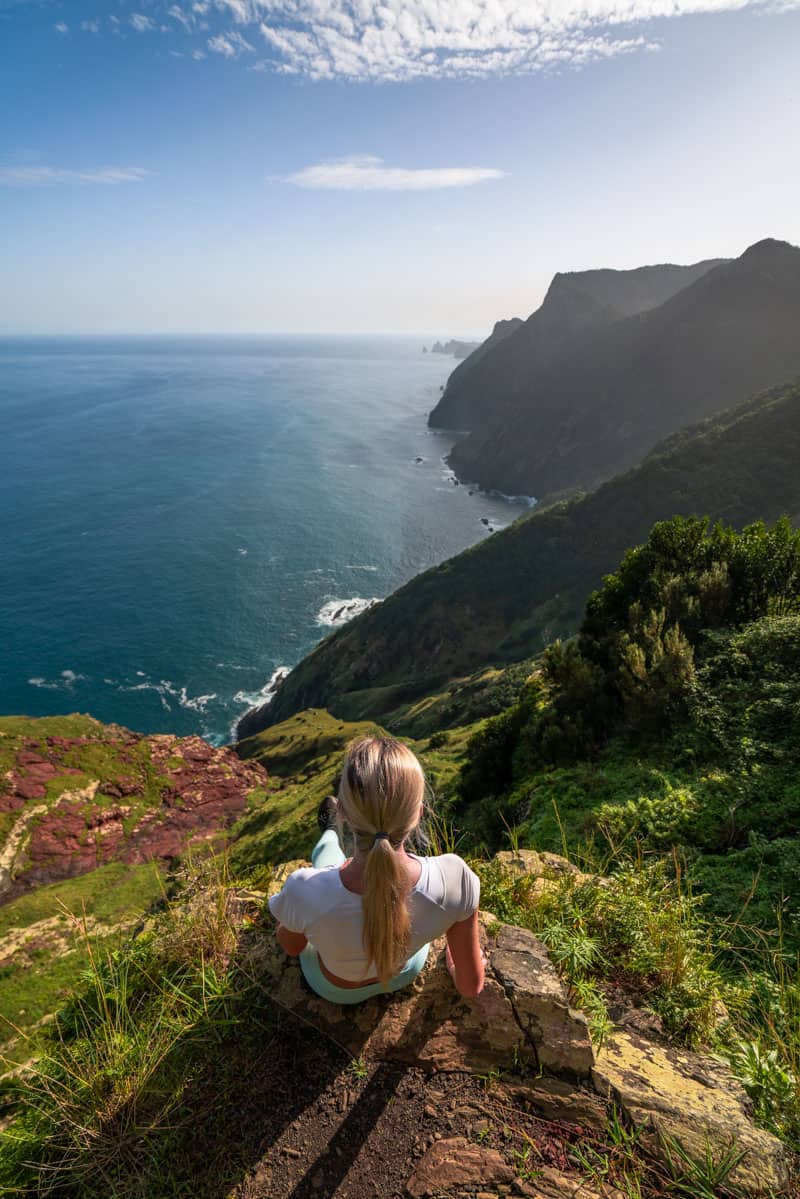 The Vereda do Larano waterfalls

At two points during the hike you need to cross a waterfall stream which can feel quite adventurous. When we did the Vereda do Larano hike after a few days of rain the waterfalls were a bit wilder than normal. That resulted in an overflown pool and quite strong stream of water. It was a fun extra challenge on this hike! And although there wasn’t much risk involved, we are always very careful when crossing water with our backpacks full of gear. 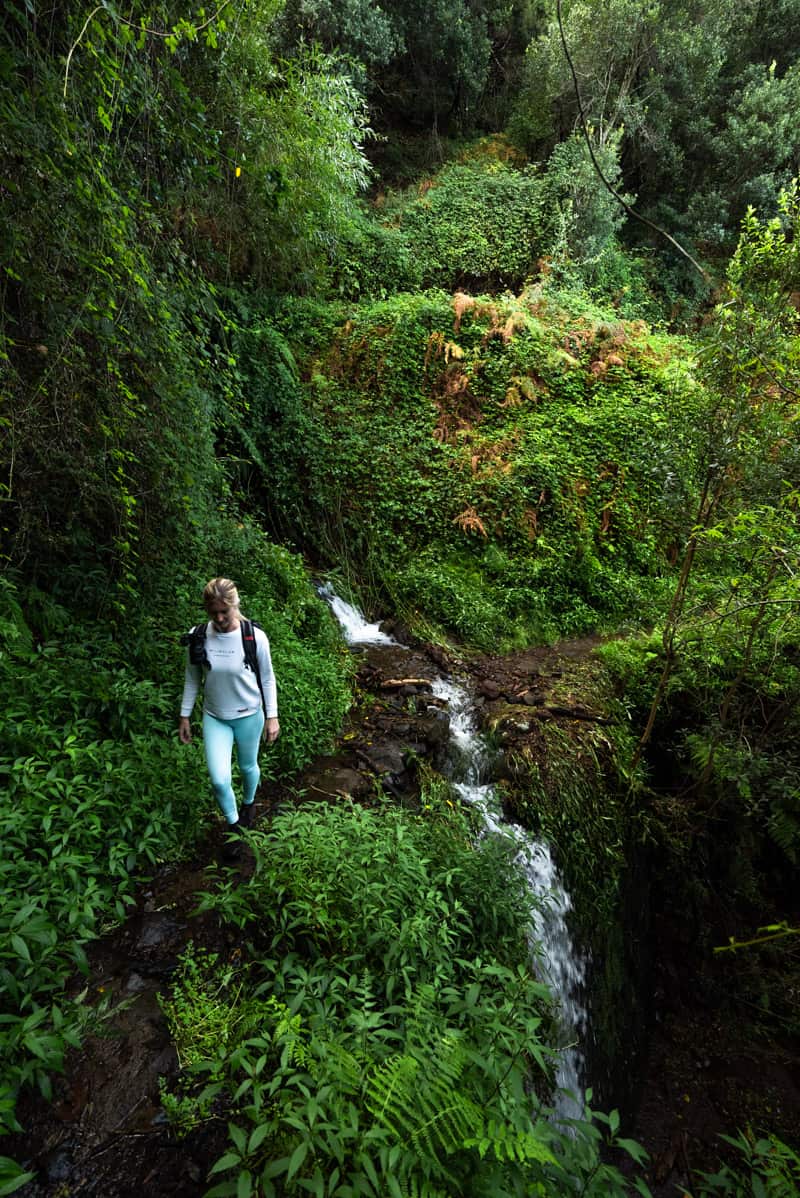 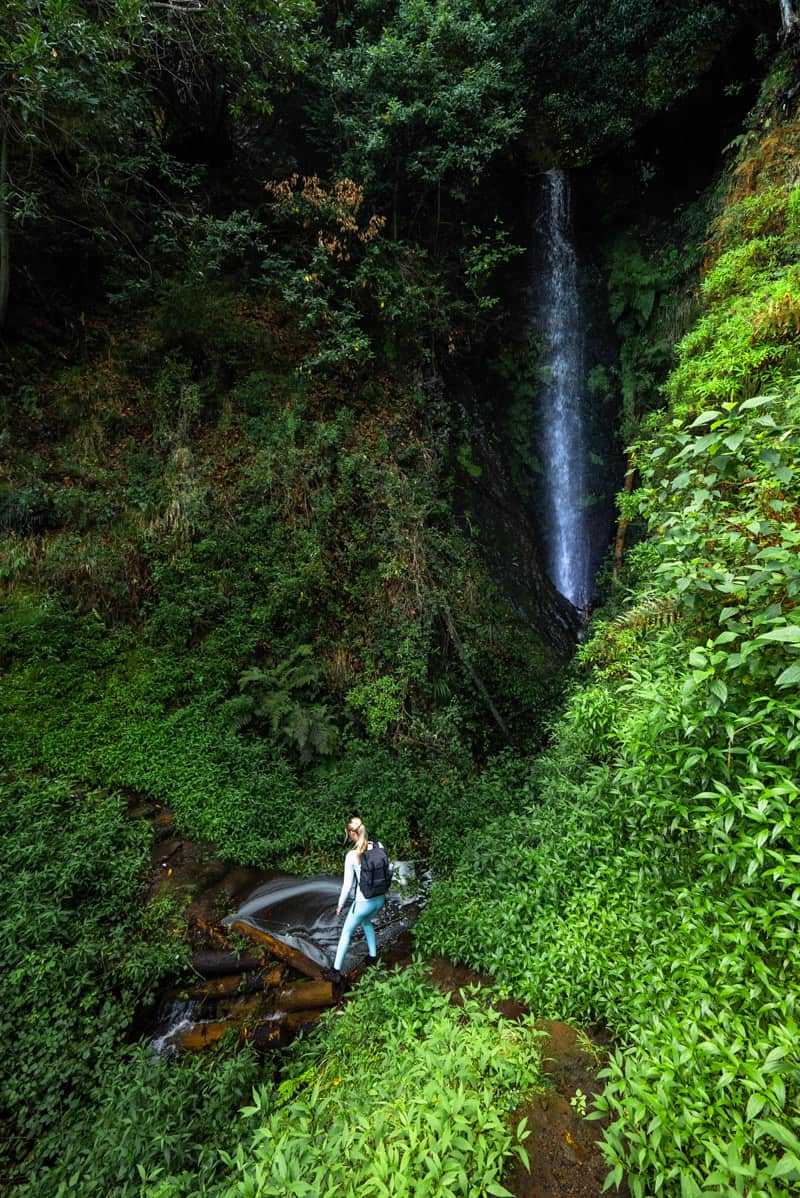 Vereda do Larano viewpoints along the trail

After about 3 kilometres into the hike (from Larano cable car), you’ll arrive at the first ‘unofficial’ viewpoint. Of course there are views all the way along this hike, but at this point we were both blown away by the incredible coastal views. Here we stopped for some time to capture the fantastic coastline and take in the views. Have a look at the photos below we took here. 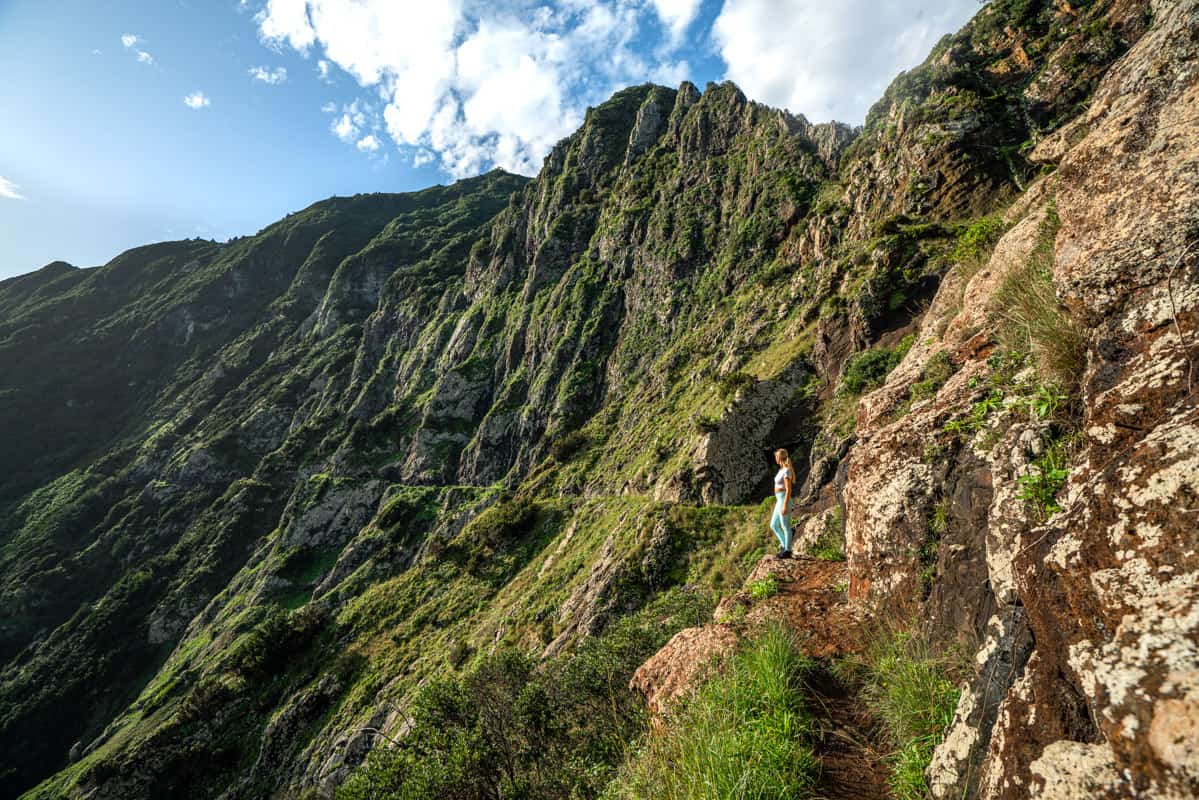 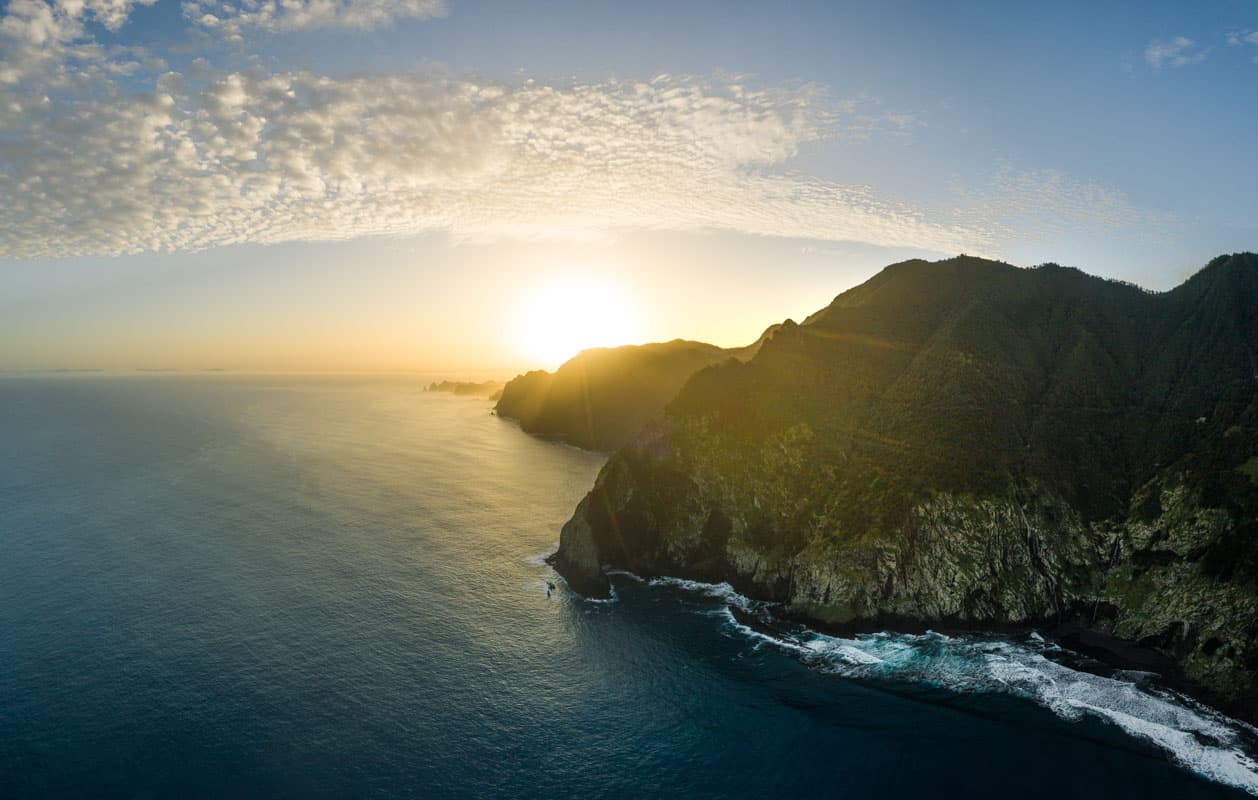 The textures on these mountains made us think about pictures we had seen from the Napali coast in Hawaii. So we tried to kind of recreate close ups of the several lines in the mountains with our drone and 100 – 400 mm zoom lens. Below a selection of the best minimalistic landscape photos we took along the Vereda do Larano. 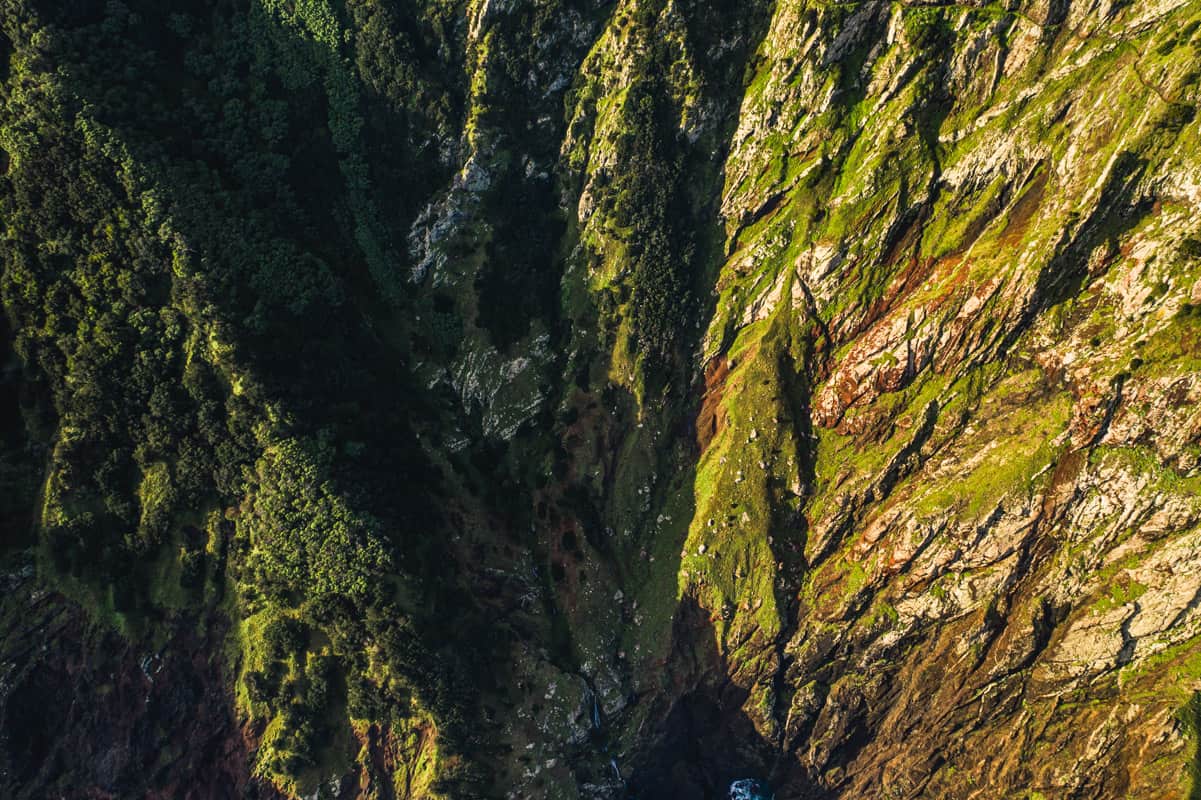 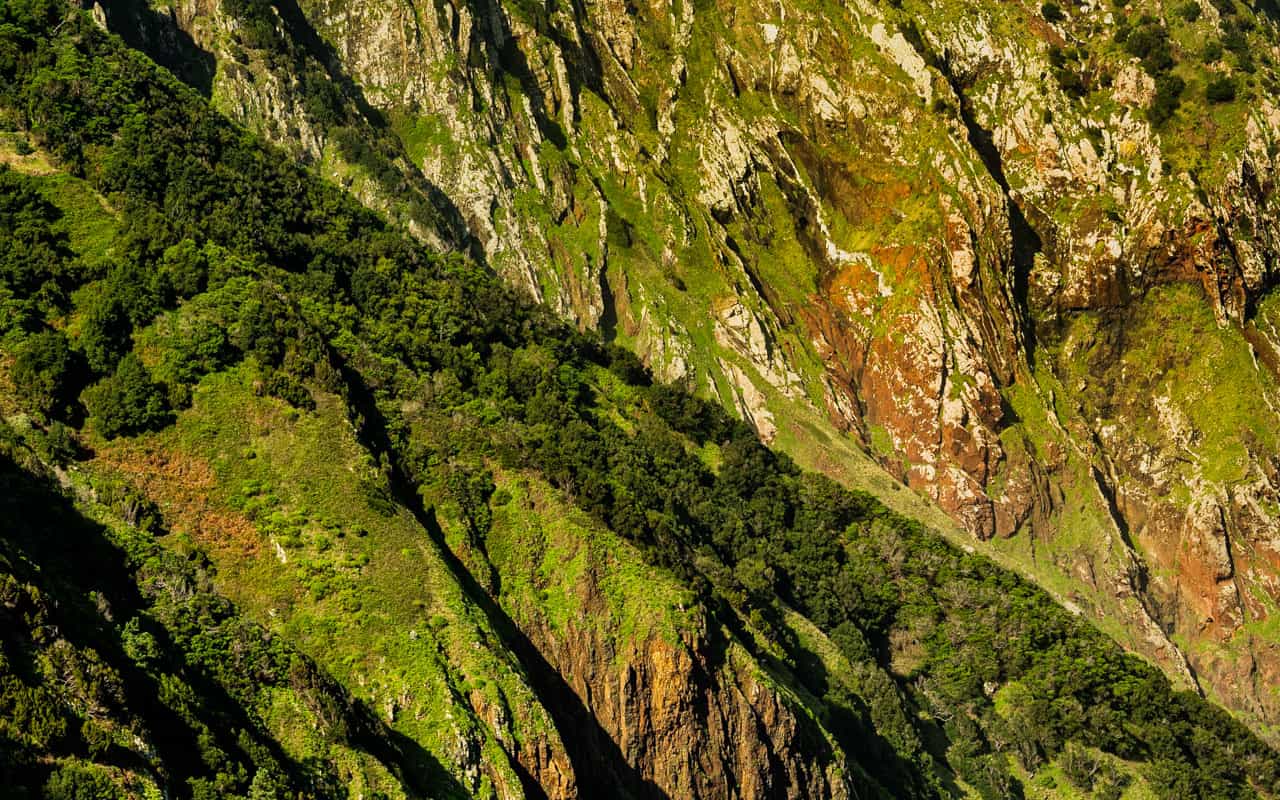 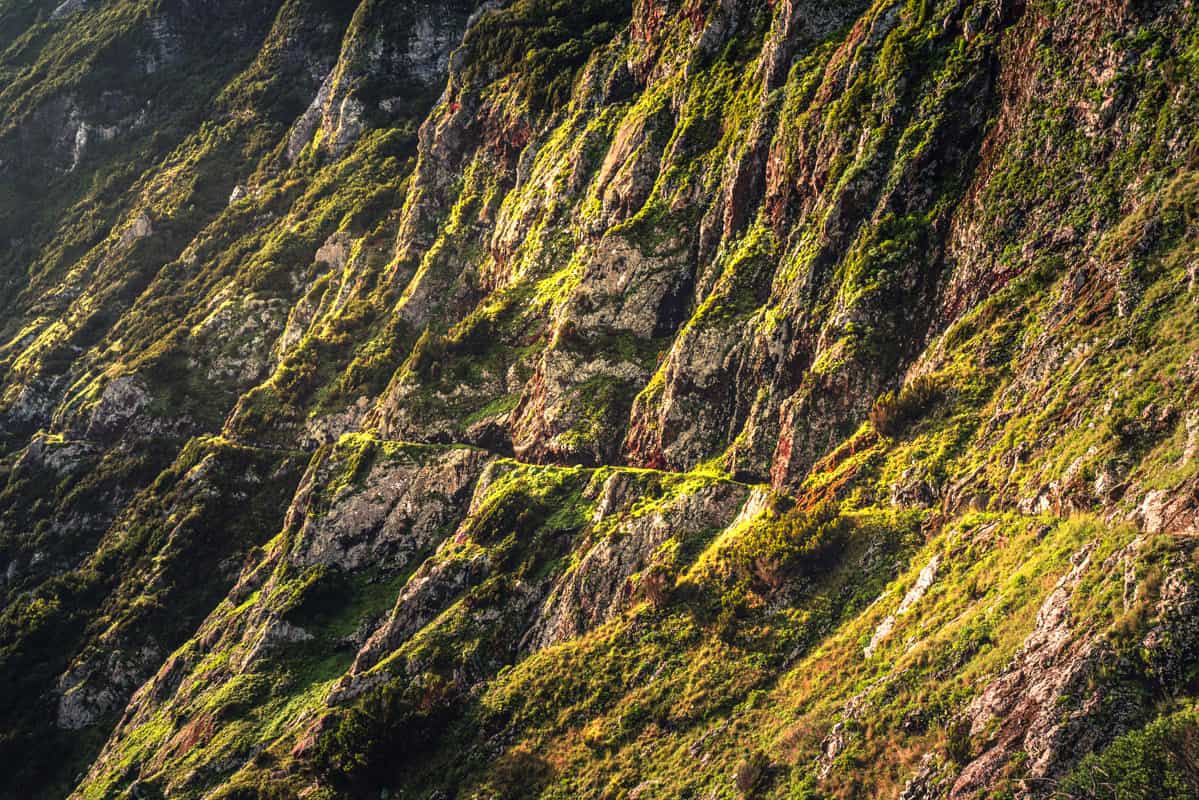 Vegetation along the Vereda do Larano trail 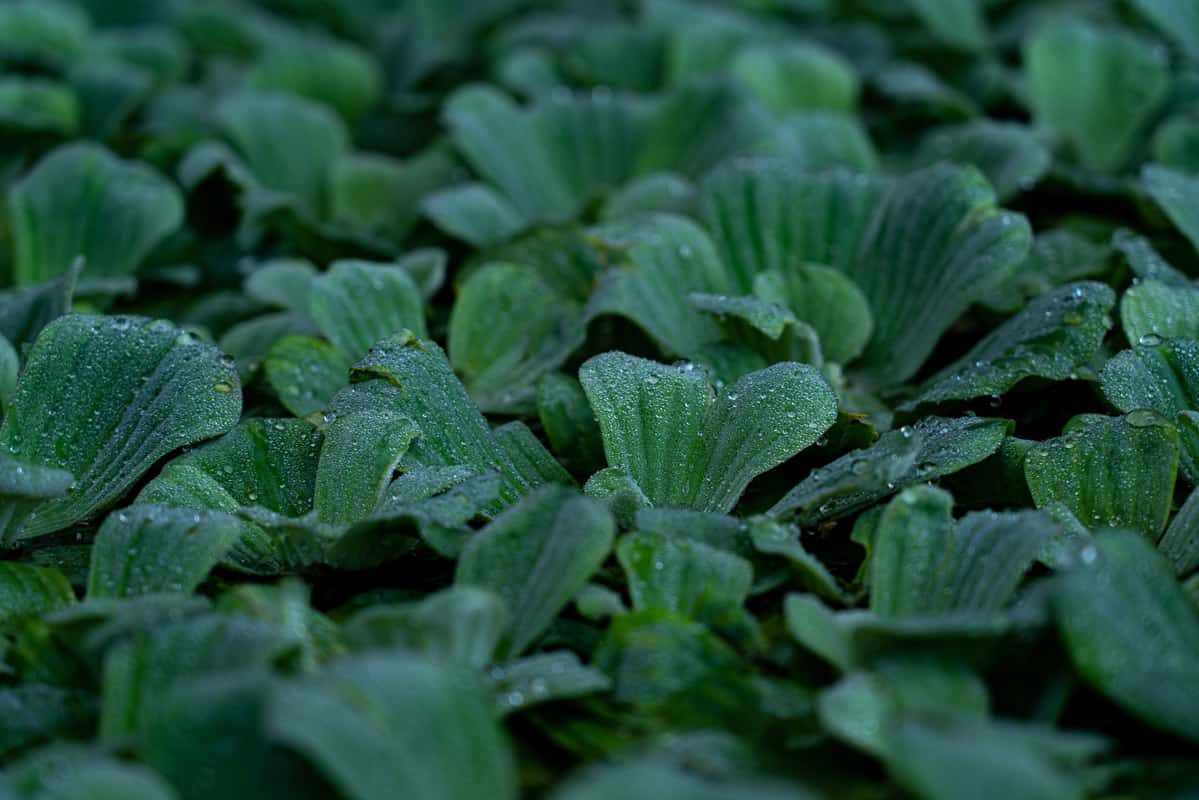 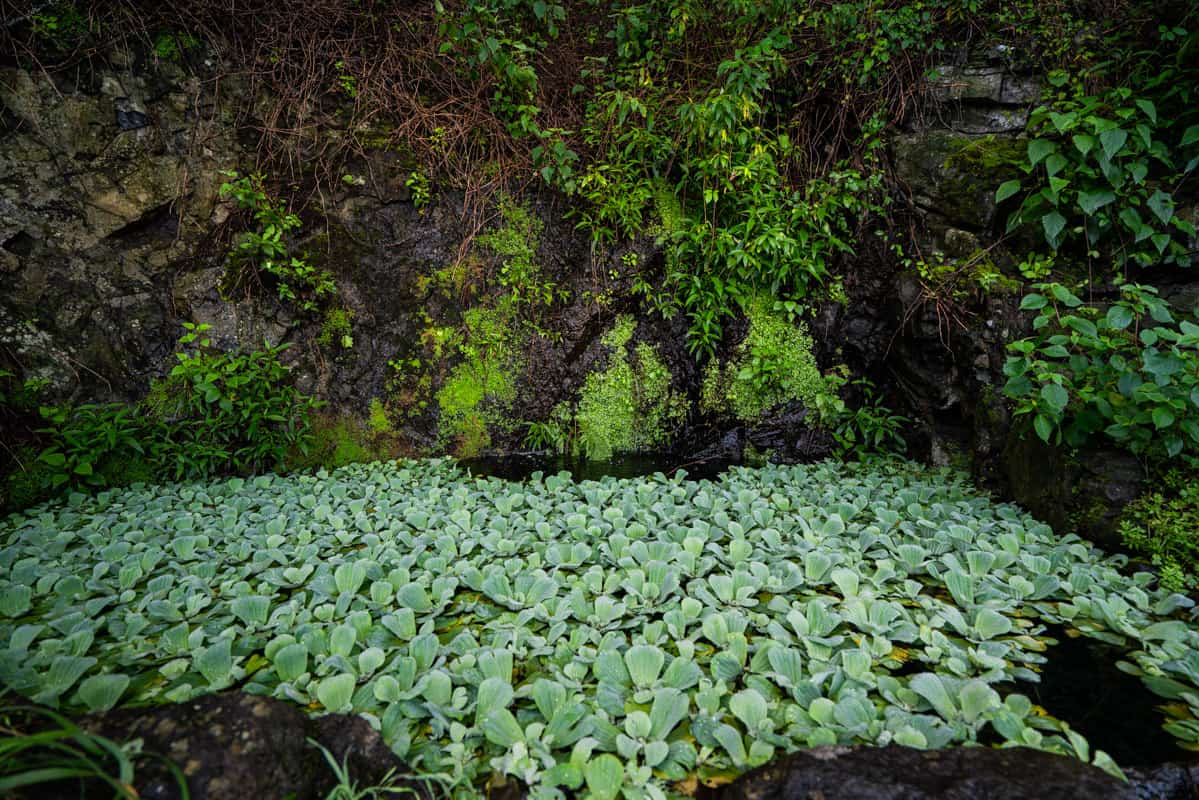 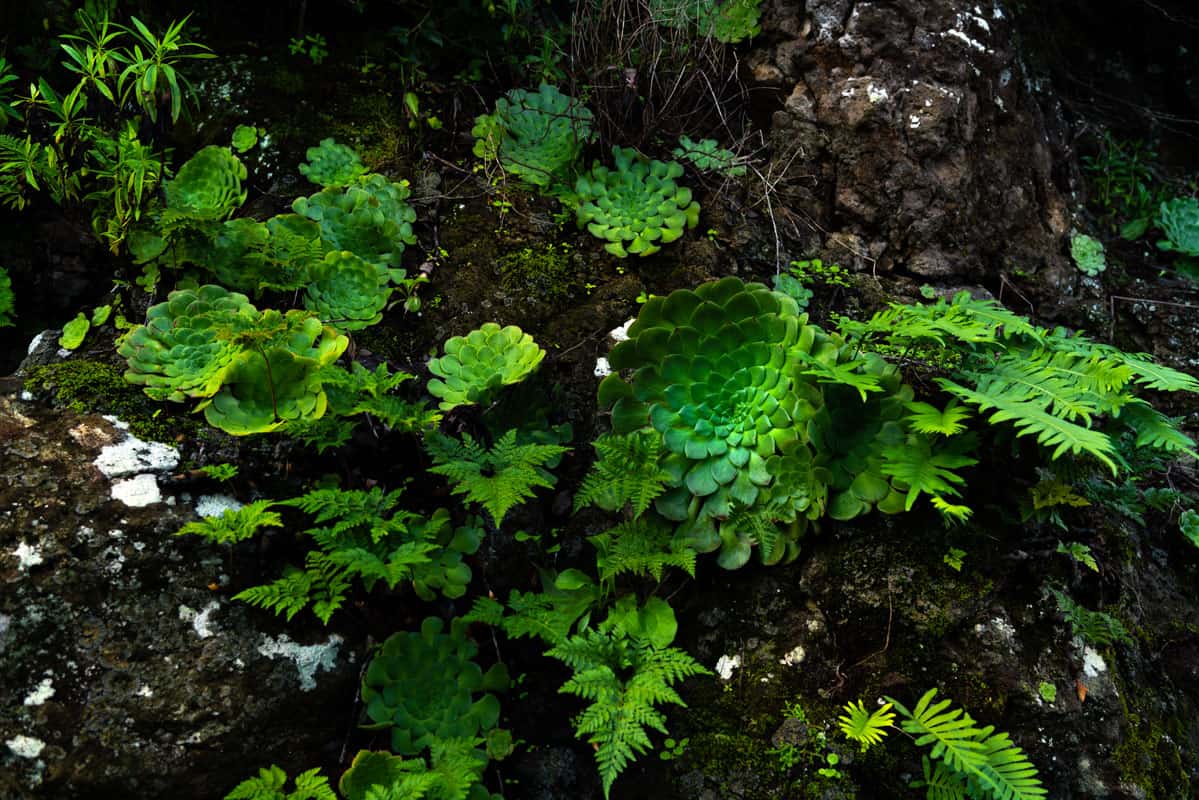 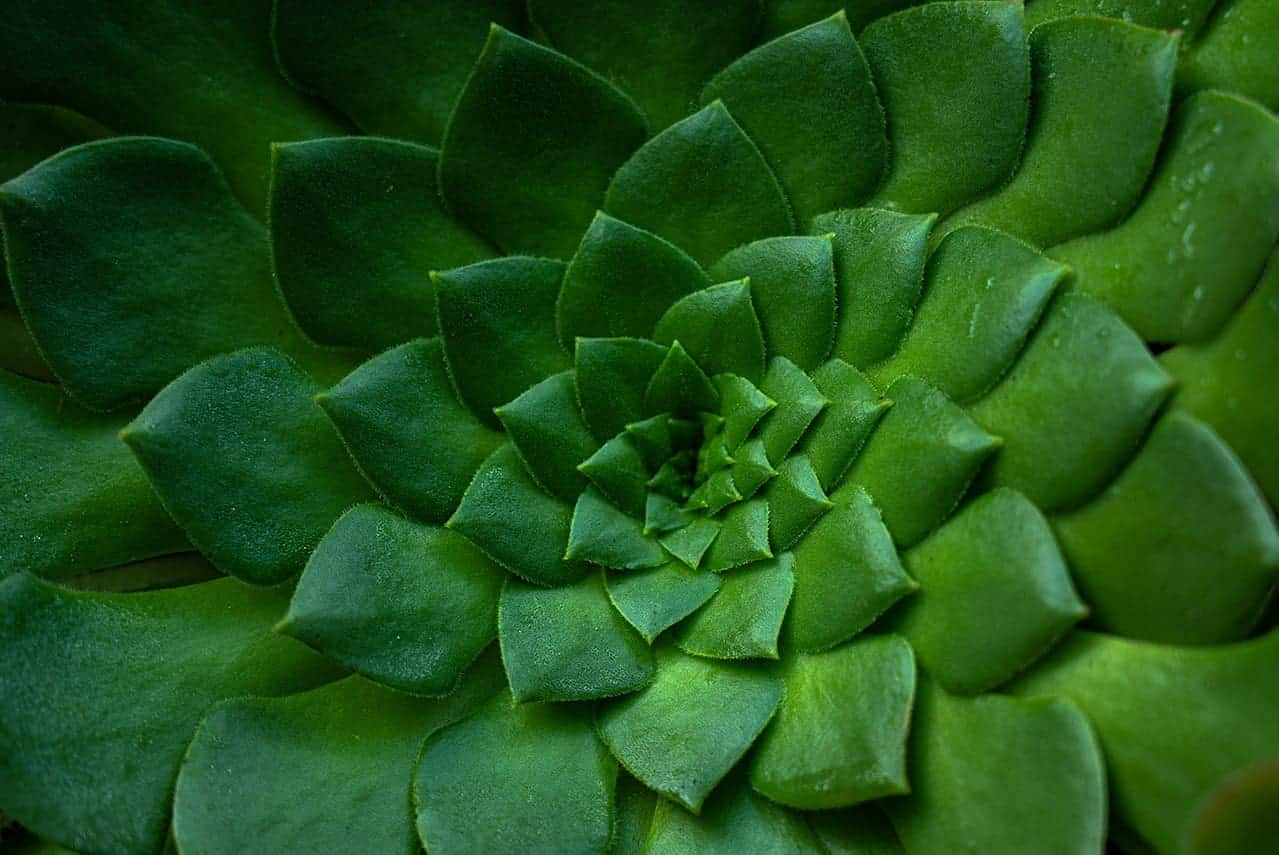 When you enter Boca do Risco you will see a beautiful rocky platform where you can sit down and take in the stunning views. This is where we had our breakfast and lunch in one! It’s a perfect spot to recharge and eat some food you brought here. We took our time to look around, find different photo angles and of course we flew the drone! Below some of the pictures we took at Boca do Risco. As you can see on one of the drone pictures you can look all the way towards the most eastern tail of the island, Ponta da São Lourenço. 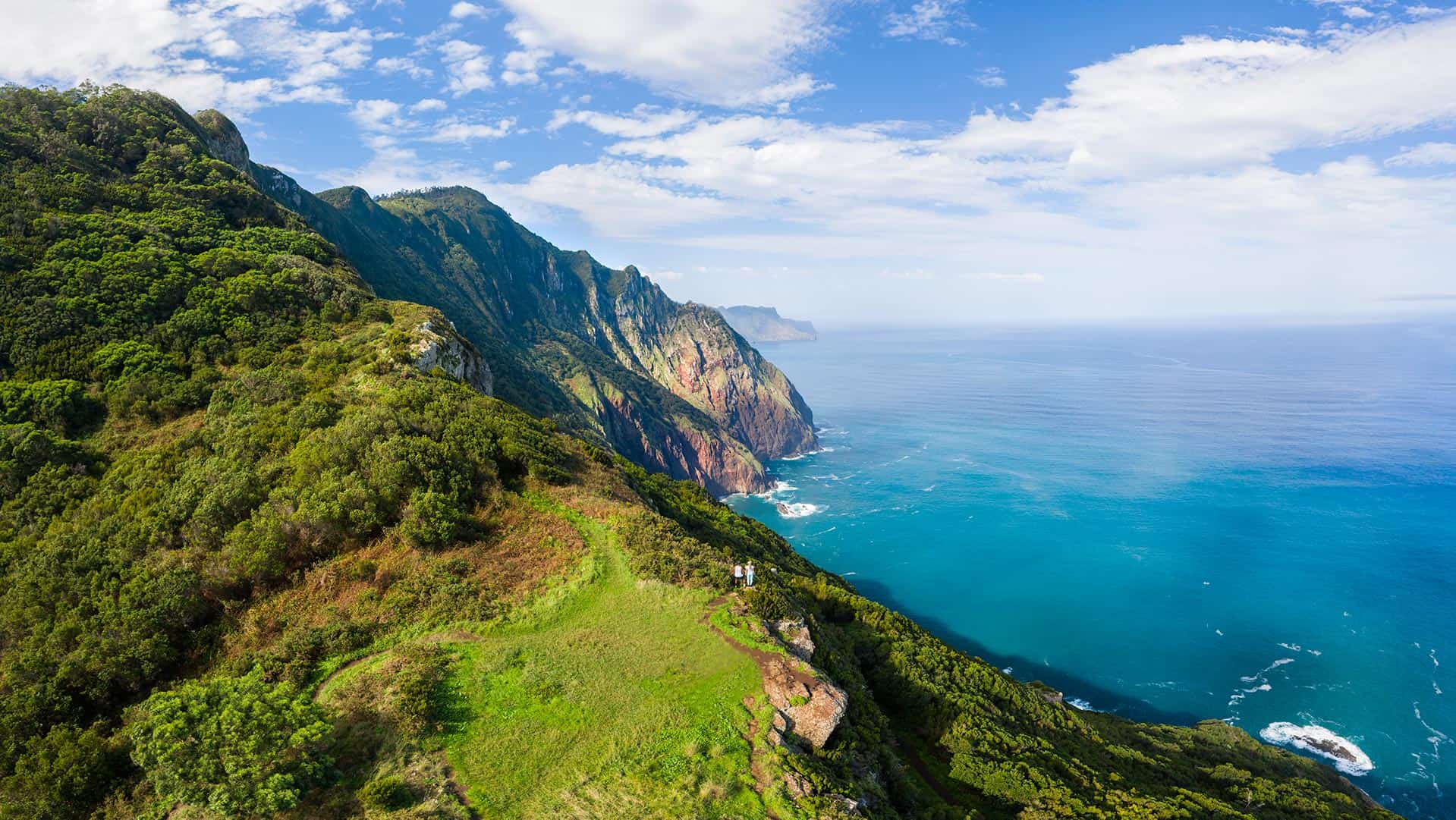 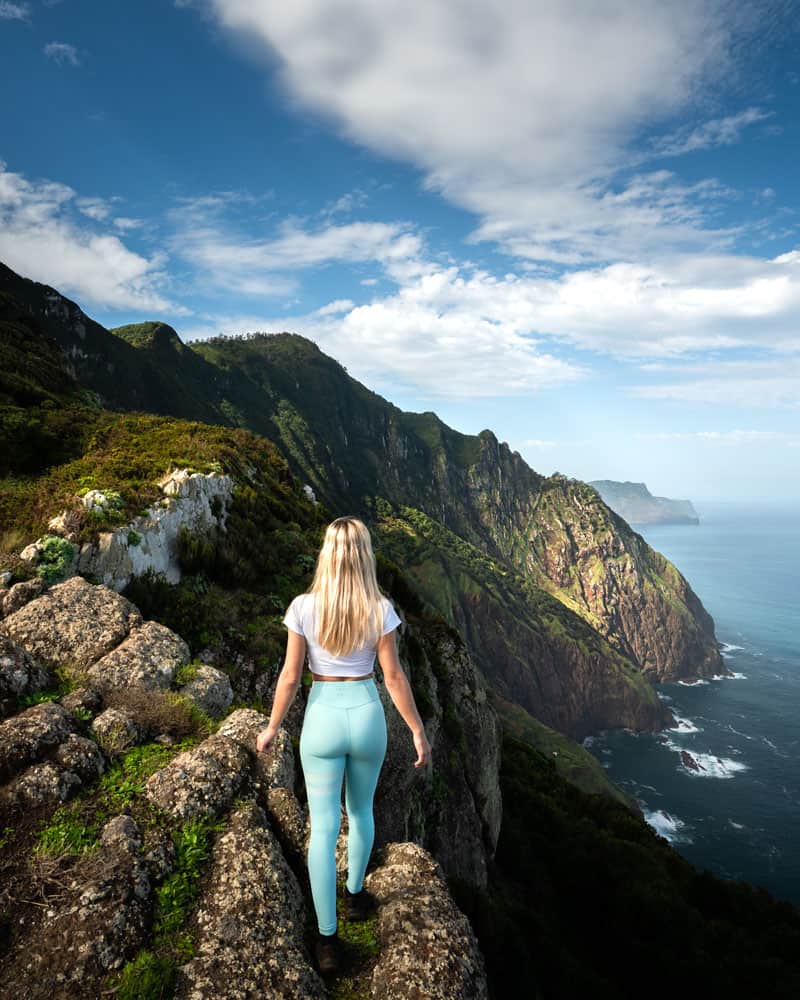 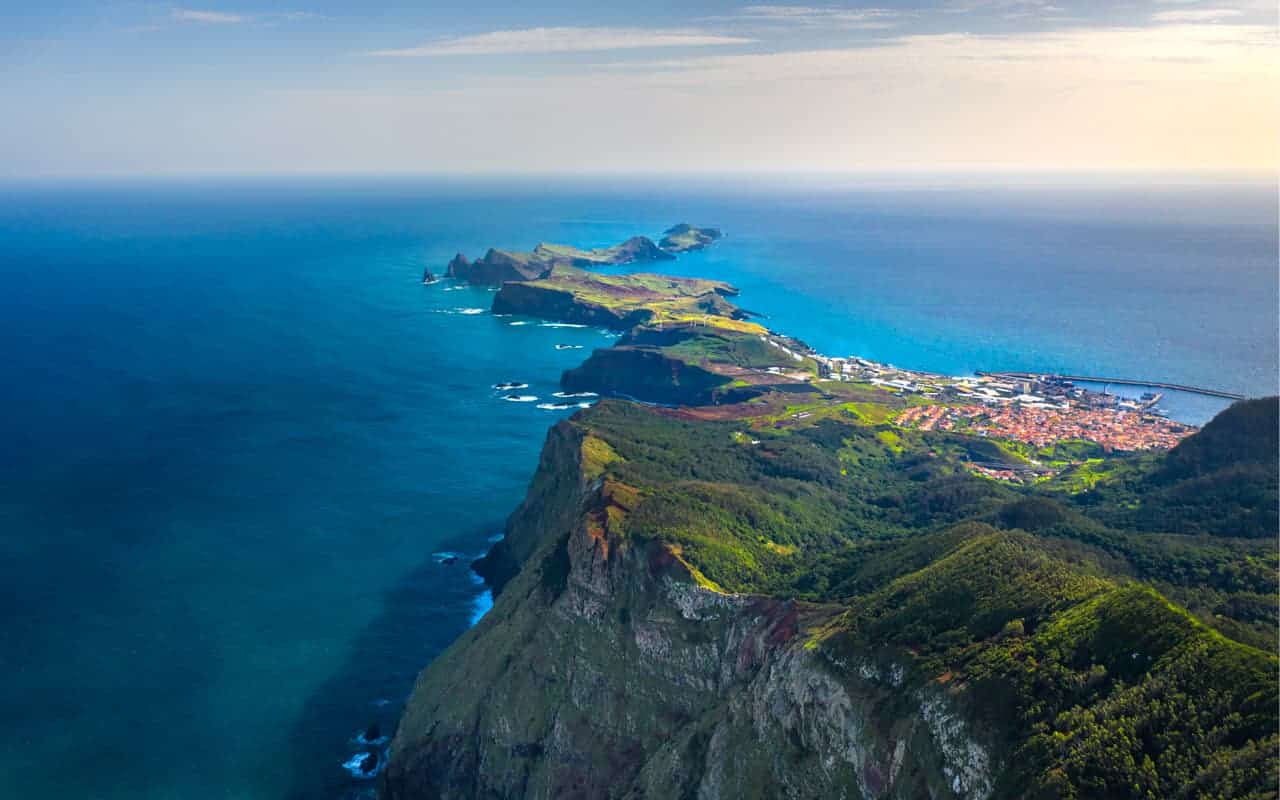 Returning to Porto da Cruz from Boca do Risco

After exploring at Boca do Risco it’s time to head back to Larano, Porto da Cruz, where the car is parked. Of course you can also walk further onto the Levada do Caniçal and through the old tunnel that connects Machico. But if you walk back towards Porto da Cruz you can expect different views than on the way to Boca do Risco. And that’s what I like the most about this hike. Despite you do it as an out and back hike from Larano to Boca do Risco, you’ll have different views on both ways! When we arrived back in Porto da Cruz the clouds came in and covered a part of the village. It were wonderful sights to see the clouds slowly hug the mountains. Below some photos we took of Porto da Cruz after we finished the Vereda do Larano hike. 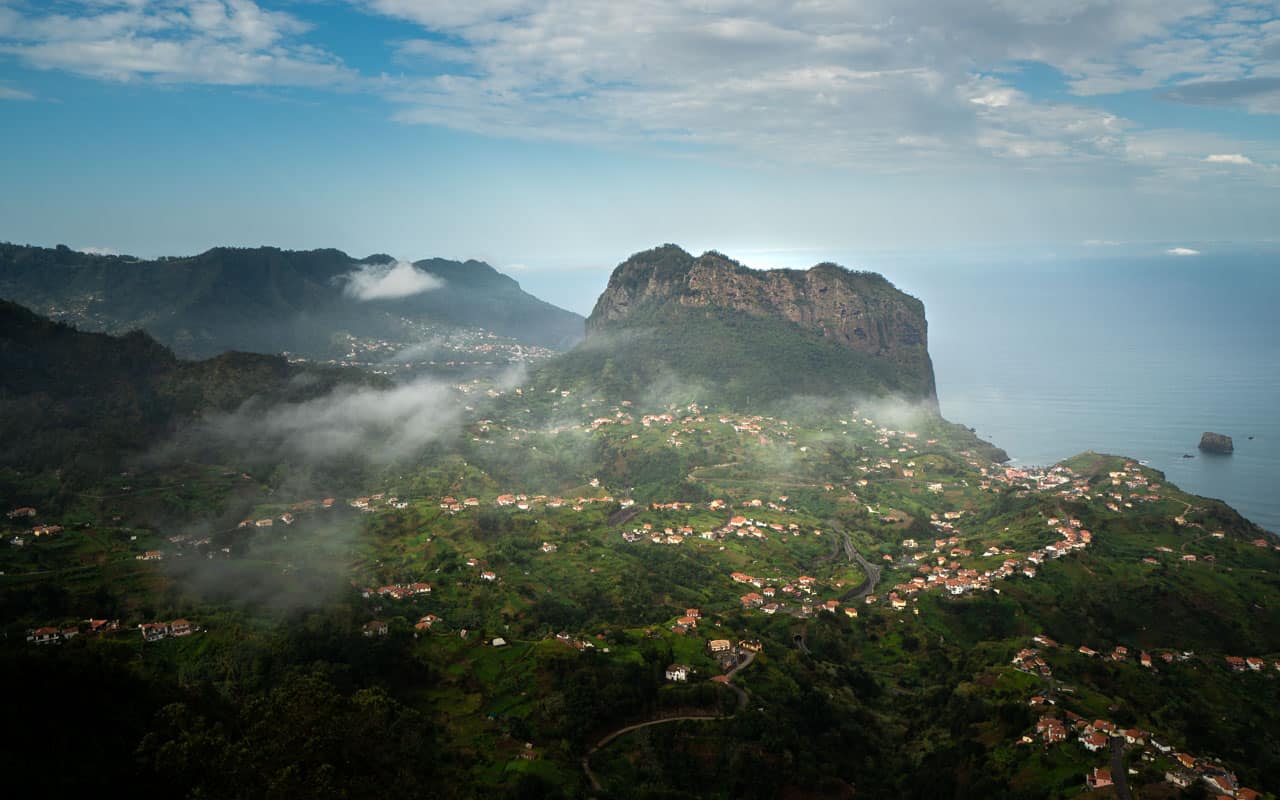 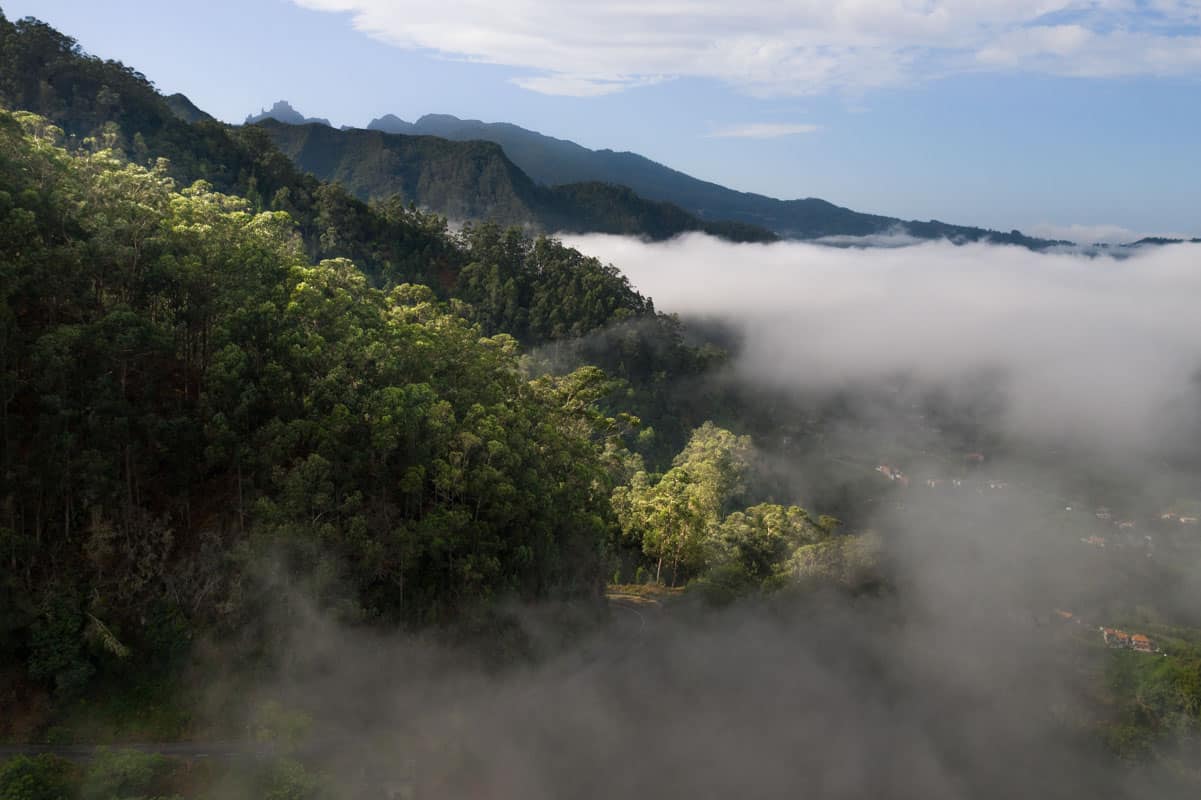 I hope you enjoyed this full guide about the Vereda do Larano coastal hike. For more Madeira travel inspiration and the must visit destinations, head over to our other blog posts about Madeira island.