Skip to content
Home » MOUNT BATUR SUNRISE TREKKING: Everything you need to know

MOUNT BATUR SUNRISE TREKKING: Everything you need to know

We did the Mount Batur sunrise hike in April and had a beautiful clear sunrise view. The hike in the dark was doable, it’s only 2 hours one way. Let’s dive into the other things you need to know before you hike the Mount Batur volcano. And if you want to know the other best Bali sunrise location, read this blog post.

Where is Mount Batur

Mount Batur, also known as Gunung Batur, is located in Bali, Indonesia. It is a 2-hour drive from Canggu/Seminyak and about a one hour drive from Ubud. The district where the volcano lies is Kintamani District. It sits at 5,600 feet above sea level which is 1707 meter of altitude. The Mount Batur is an active volcano, just like the Mount Agung. Although Agung’s last eruption was in 2019, and the last eruption of Batur was in 2000. 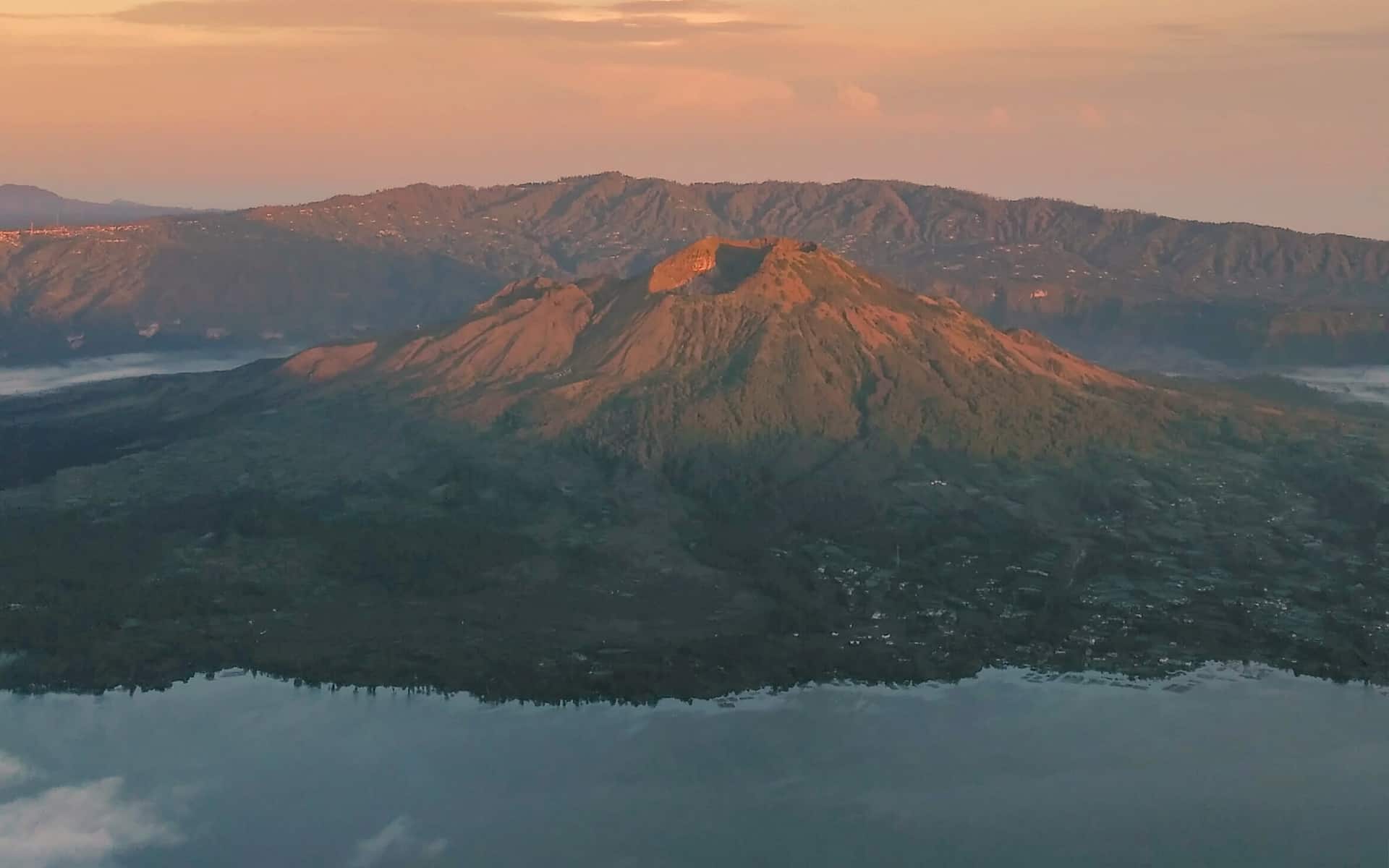 Before you set off for the Mount Batur hike, below some key facts!

Hike distance and duration: The total distance of the Mount Batur hike is 11 kilometres out and back. The way up will take you about 2 hours depending on your fit level. The duration of the way down also depends on the route you choose. You can go back the same way as you came or take the route along the crater rim. The way back will take you also about 2 – 3 hours, same as the way up also depends on your speed.

How to book a Mount Batur sunrise trekking

The best way to get to Mount Batur is by booking a sunrise trek which will include your transit in a van with the rest of your group. Otherwise you have to drive yourself with a motorbike in the middle of the night to the starting point of the Mount Batur. And to be honest, you don’t want to do that to yourself. It’s freezing cold in the north in the middle of the night. And the only thing you want to do on the way back in resting, not driving another 2 hours on a motorbike back to Canggu.

So the other option is that you stay nearby the Mount Batur. You will save some sleep that night, drive yourself to the car park or make use of the pick up service. 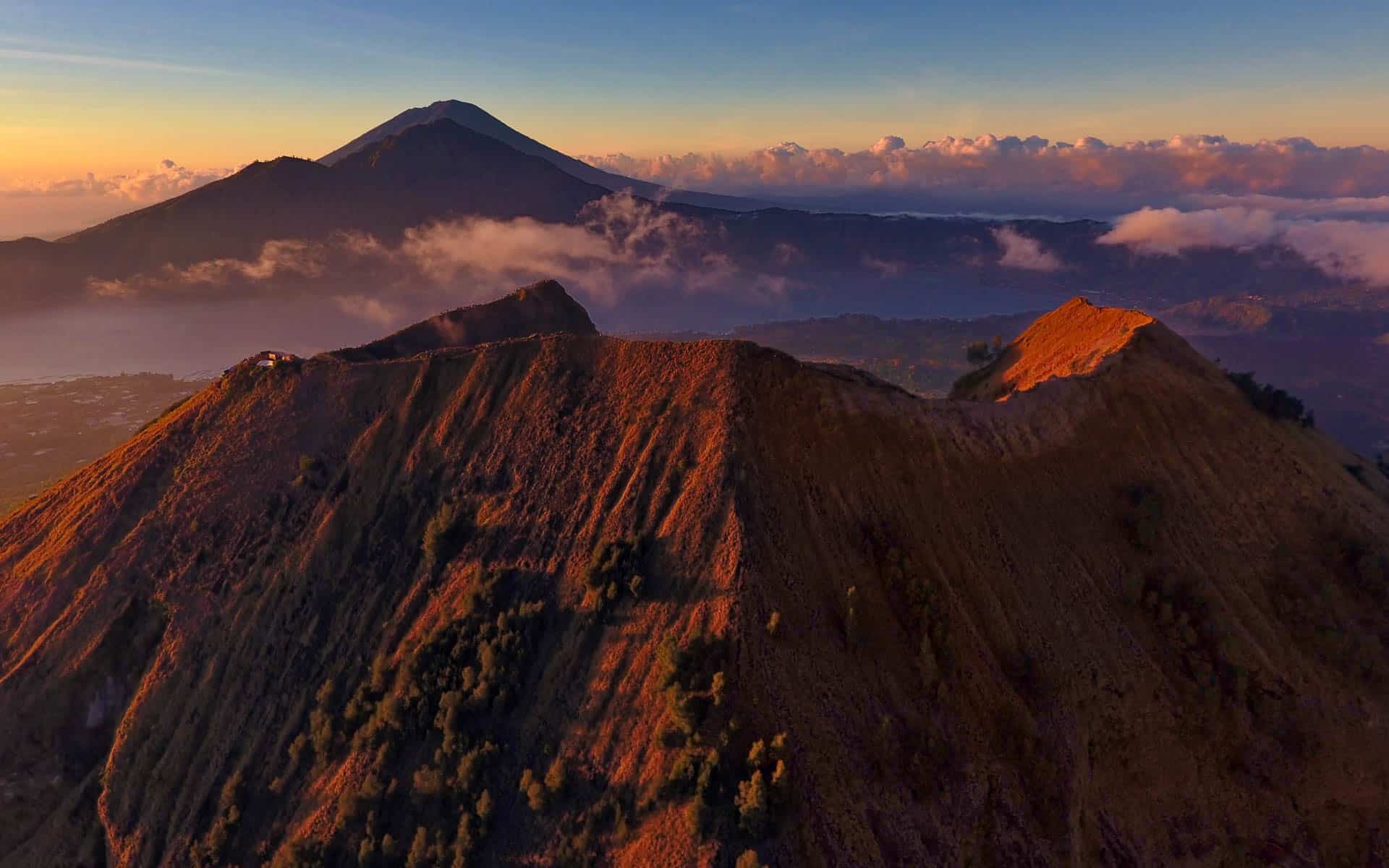 How to get to Mount Batur

The most common way to do a sunrise is to book a tour that includes hotel pick up. Most of the tour companies offer the tour including pick up and breakfast. But check this beforehand so you’re well prepared! Most trekking companies include a hotel pick up and breakfast in their rate, and the price varies on your pickup location. You could hire a taxi but it won’t be much cheaper than booking a sunrise trek that includes transportation and a guide up to the top. Or you can drive in the dark in the middle of the night, but on the way back the only thing you want to do in rest and drive another 2 hours. 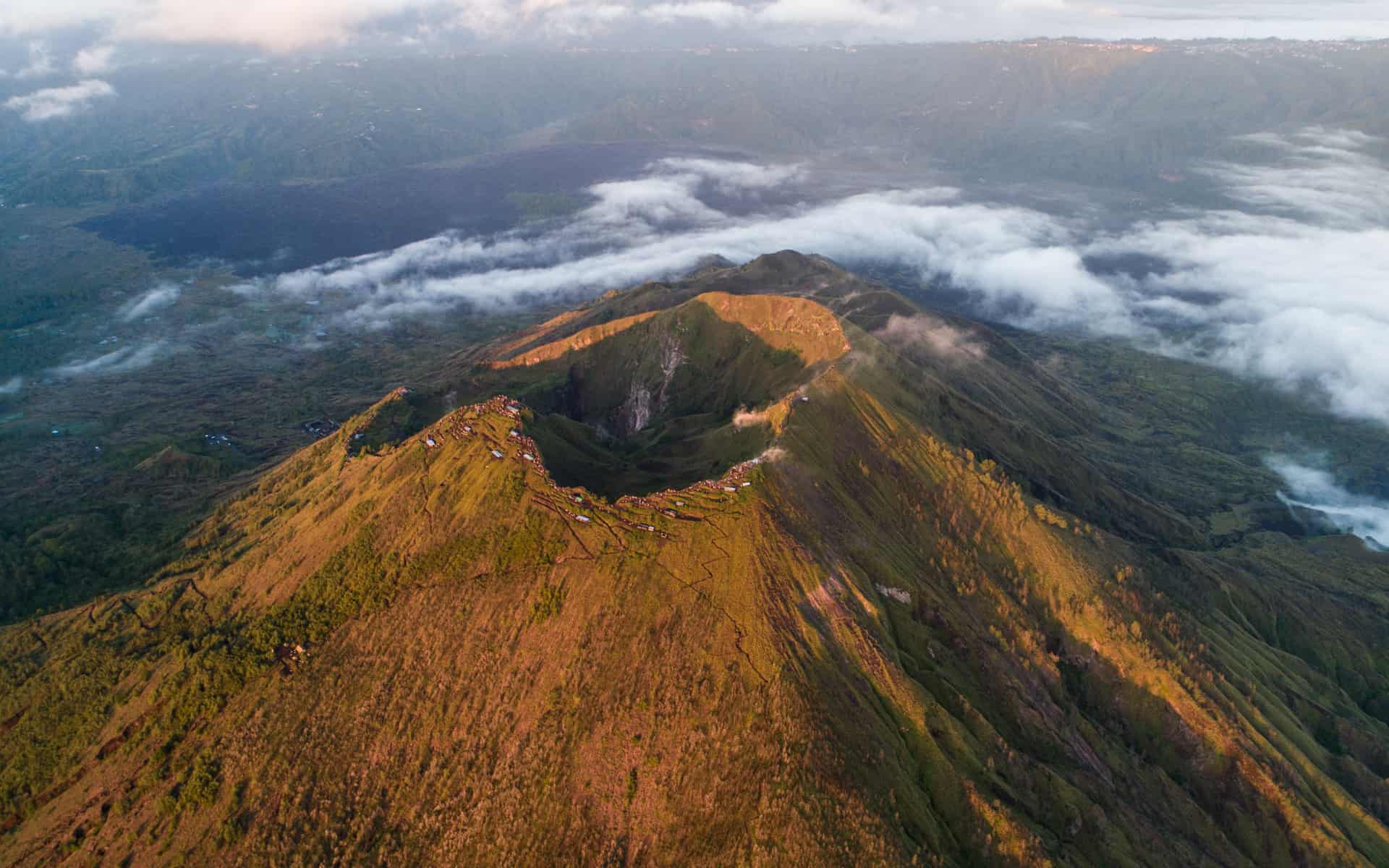 How much does it cost to hike the Mount Batur Bali

Prices vary depending on what’s included or not. Check this beforehand in the reviews, because otherwise you might want to prepare some breakfast or transfer for yourself. Prices start around 350.000 IDR per person up to 900.000 IDR. You can book a Bali trekking tour in combination with a coffee plantation tour or a private tour. You can even include water rafting in your tour schedules! 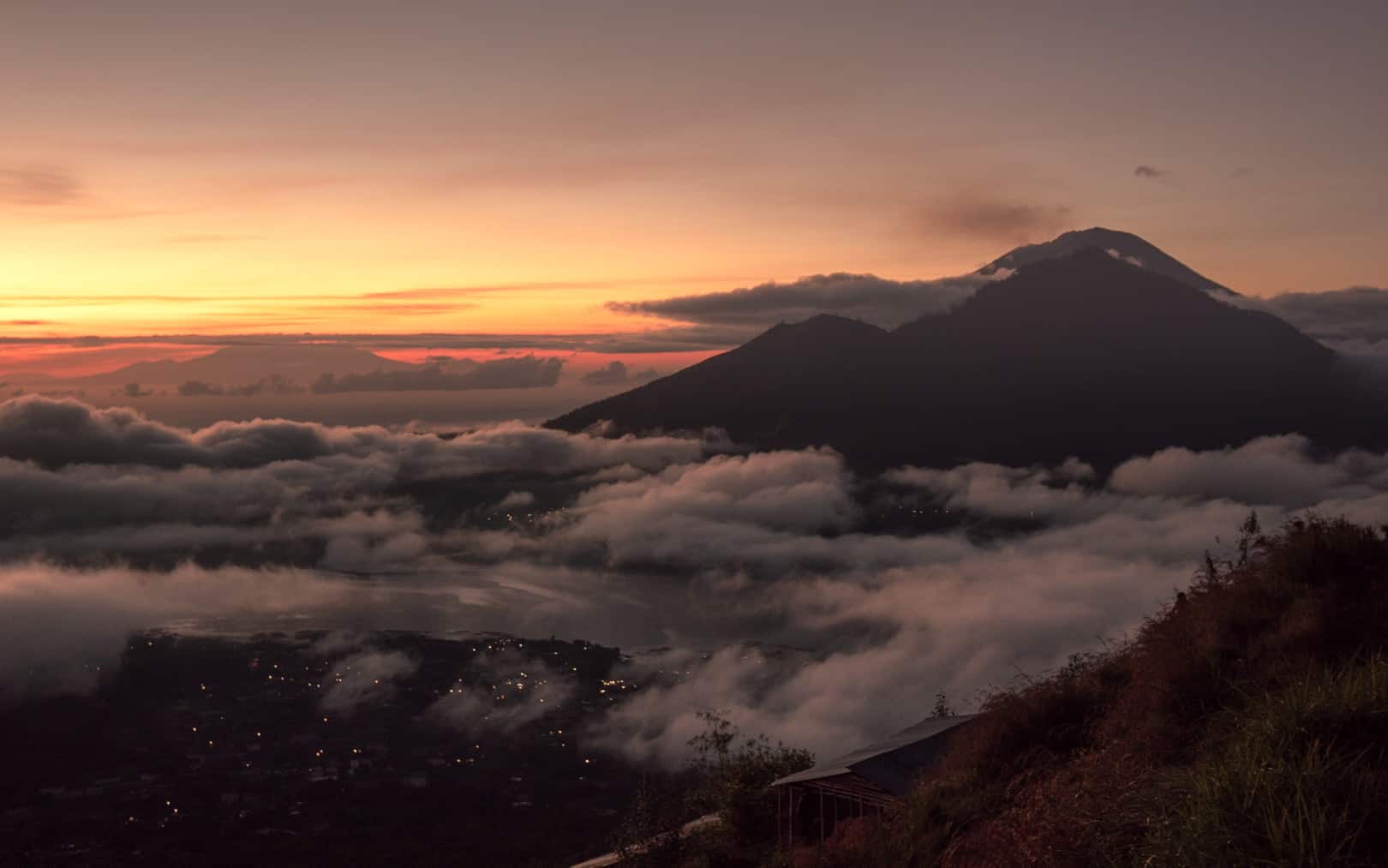 The best time to hike the Mount Batur volcano is in the dry season. Roughly from May until September, but any other period when it’s dry could be a good time. It might get dangerous as slides may arise or rocks can be slippery in rainy season. That also brings us to the subject of wearing quality hiking shoes with grip. But I’ll get more into that later with “What to prepare before you hike Mount Batur”.

About the best timing to hike the Mount Batur in terms of a great sunrise, you have to be lucky depending on the season. We had a great sunrise with low hanging fog in April. It was great photography circumstances and it was not too hot or too cold hiking up. It’s hard to say what the best time is, just have a look at the weather predictions and cross your fingers!! 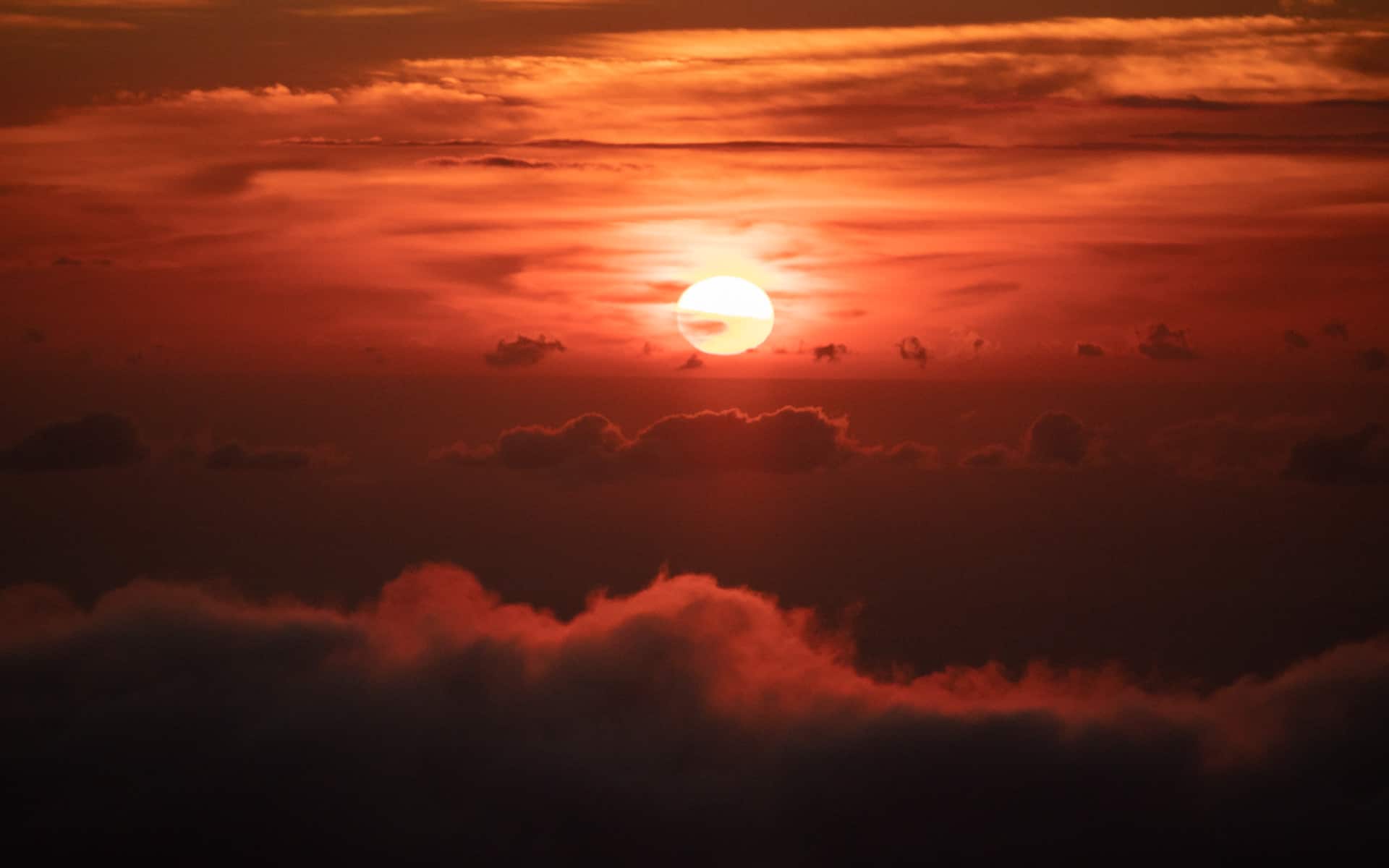 How hard is the Mount Batur sunrise trekking?

One way of hiking is about 2 hours without too much rest. The total incline of the Mount Batur hike is about 700 meters which is spread over 11 kilomters which is the distance of the hike. At some points, it gets very steep and you have to climb just a little but, which might be for some people a bit heavy. The first half an hour is pretty flat but it does get quite steep for about 45 minutes after that. But overall the hike is doable for any fit or relatively fit person. You just have to like to hike for 2 hours in the middle of the night for a wonderful sunrise view 🙂

There is an option to take a motorbike up to the summit, but that really isn’t necessary. Also it isn’t as rewarding than when you’ve hiked to the summit yourself! 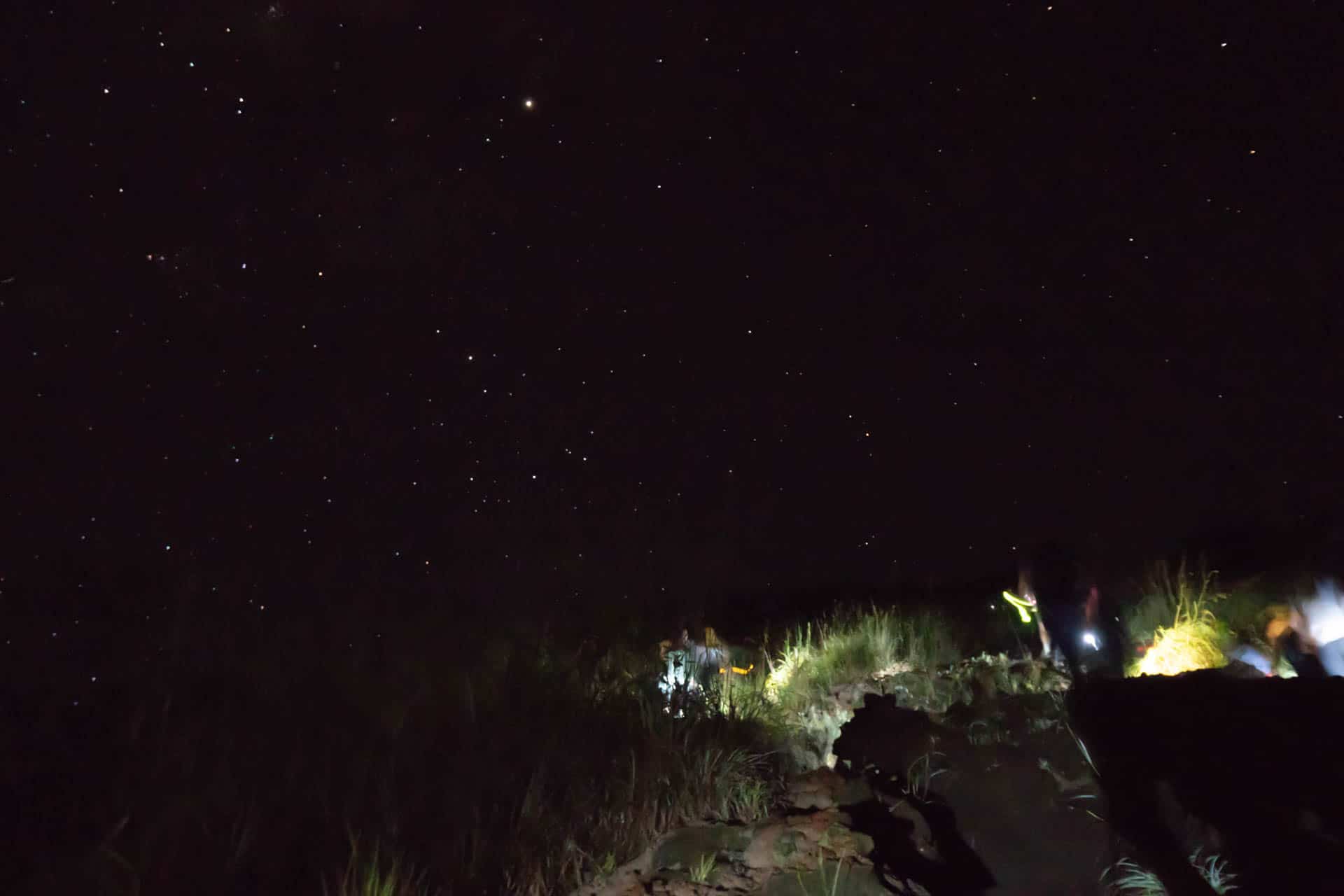 What to prepare before you hike the Mount Batur

In total you will hike around 4 hours, so you will need at least 1 Liter water. It can get cold at the summit especially when clouds passing by. So you will also need a (light) jacket. Wear shoes that are comfortable for you to hike in for 4 hours. Take some band-aids with you in case of blisters or other small wounds. A headlamp or camera flashlight is needed in the first hours. The paths are uneven so at some points you have to climb a bit. If you know you’re getting hungry after an early morning workout, take some (healthy) snacks with you to keep your energy level high. Most trekking tours include breakfast, which consists of boiled eggs that cooked using the heat of the mountain’s hot springs, some bananas and hot coffee or chocolate drink. Nothing fancy at all so that’s why I suggest to bring a few snacks along.

And of course if you’re climbing the Mount Batur to catch some stunning footage then you really want to bring your camera and drone!! Different lenses are also recommended. A telephoto lens gives such a different dimension of experience than a drone. 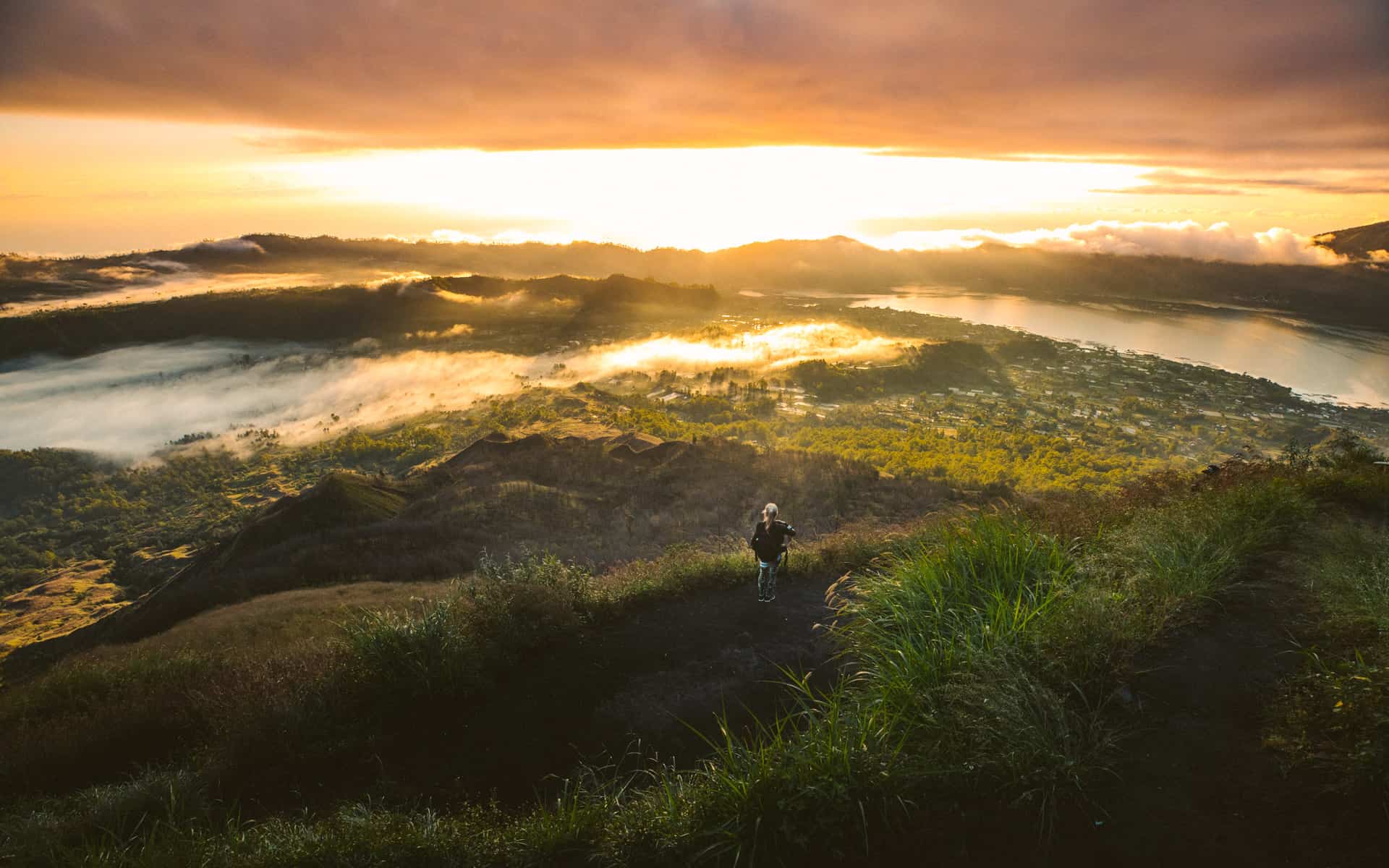 Our experience with the Mount Batur sunrise trekking

We hiked the Mount Batur volcano together with a group of 25 people who contributed to the “Adventurebag Crew”. Jackson Groves was the initiator and arranged a collaboration with Four Elements Adventure who took care of the transport, guides and accessories. The mission of the group was to pick up trash on the way back which is then called your “Adventure Bag”. We got picked up at 1 AM and drove via Ubud to the starting point of Mount Batur. There we met our guides and we got a quick briefing. After that, we started the 2-hour hike under a sky full of stars. The first 30 minutes were easy. We had a quick stop to get some water and continued the hike which became more steep and heavier at that point. But with short stops everybody reached the summit in time for the sunrise! Overall it was a moderate hike which is very much worth to do. 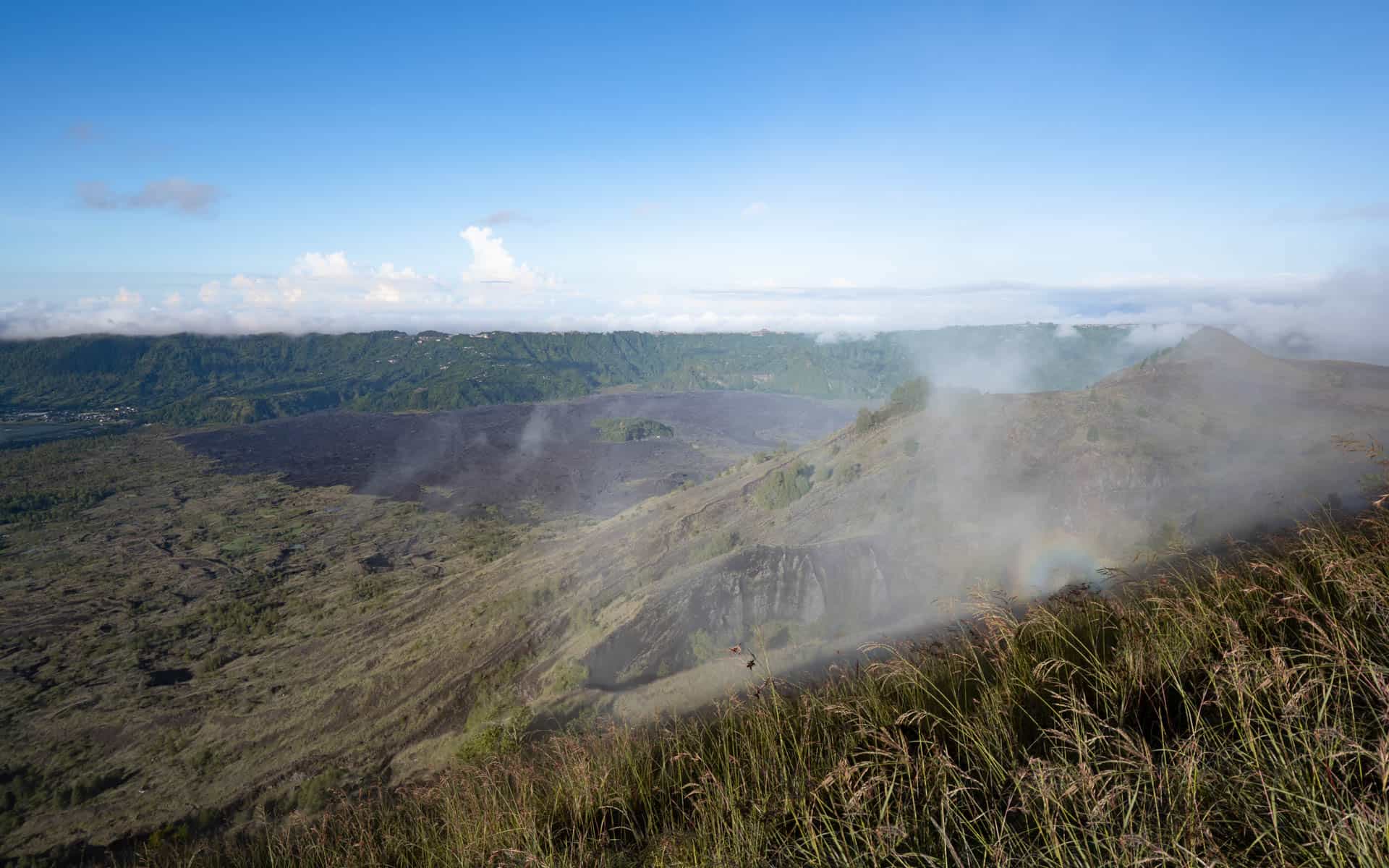 After 2 hours we arrived at the summit and the colors in the sky started to turn from blue to yellow orange and red. We got offered some warm chocolate drink which was the perfect choice for that moment. We enjoyed the beautiful view and saw how the Mount Agung became more visible while the sky was changing colors and the sun slowly lit up the earth. It was a little bit foggy but that turned out to be great for the pictures. While Atiba was flying the drone, I took the telephoto lens and photographed the light rays in the low hanging fog created by the sunlight. It was magical to see these details from such a distance. You could see the Mount Agung and the Lake Batur easily, but after 45 minutes the clouds came in and our view was gone. 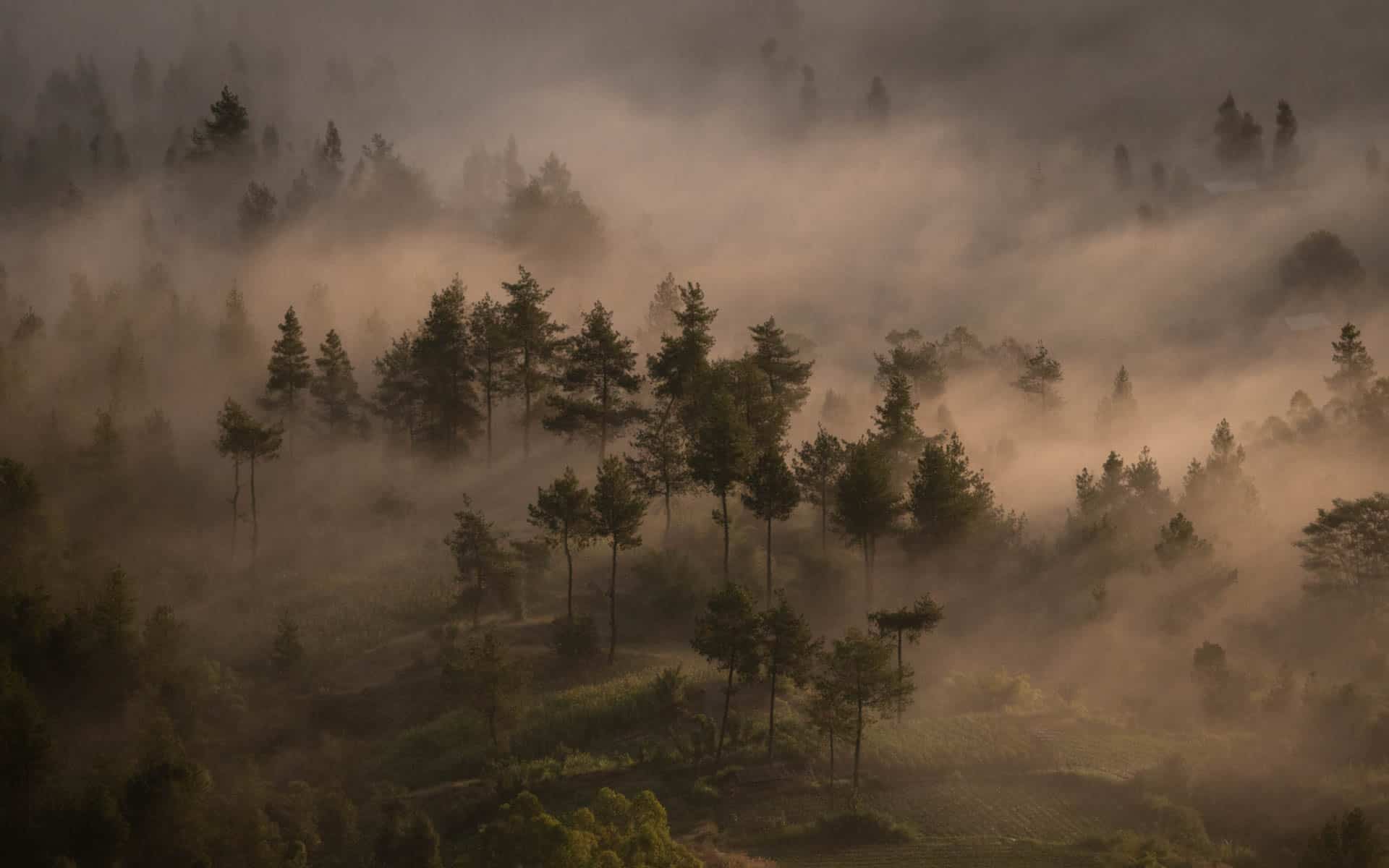 We walked another way on the crater back to the car park and started the journey to pick up all the trash that we found along the way. This way was a bit harder with the slippery lava ground underneath us. But it gave some amazing new views, also on the Lake Batur and the other side of the Mount Batur. At a lower point you could even see the area of a lava stream! And you will also meet some cheeky monkeys on your way back to the car park.

In the end, we collected more than 250kg of trash. And even at that point, we had left some trash as there was no more space in our bags. Please let this be an example of what YOU can do as well!! When you walk in nature, take an empty bag with you and collect trash and plastic. If not you then who?! 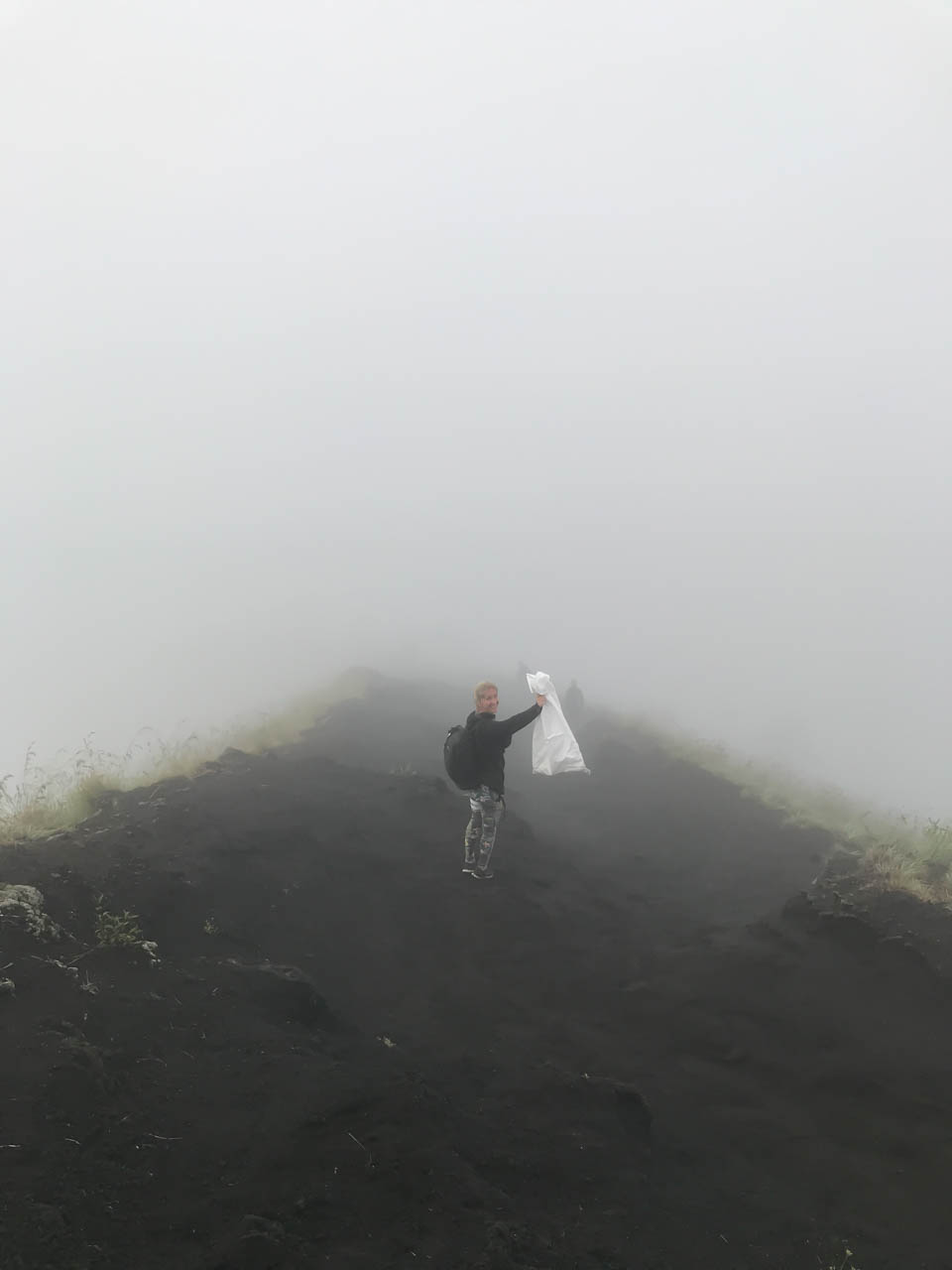 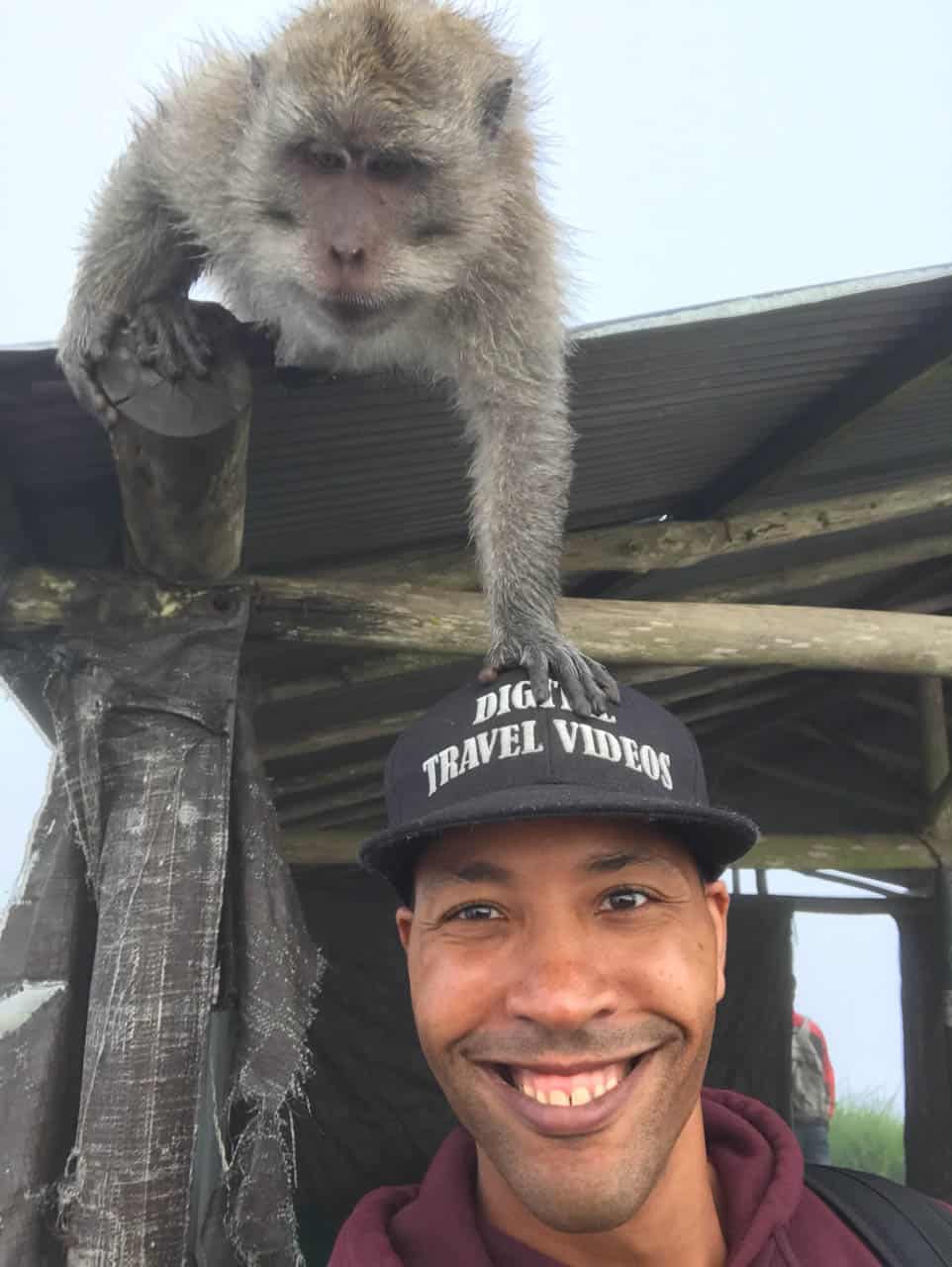 We hope you will hike Mount Batur and enjoy the beautiful view! If you have any questions, don’t hesitate to ask them in the comments.

For more in-depth information about Bali, head over to these blog posts:

Most beautiful waterfalls of Bali

Things to do in Canggu

Most beautiful sunset spots in Bali