Mirissa beach is a little kilometre long with plenty of space to lay out your towel and just relax for a day. It is a beautiful beach, with a relaxed and laidback atmosphere. The waves can get a bit big which is why this beach is very popular among surfers. Along the beach are many small restaurants and cafes, serving delicious fresh seafood. After sunset, the restaurants put out tables and chairs on the beach, light the lanterns and candles, and serve seafood barbecues. A super nice vibe and way to end your day at Mirissa beach!

Things to do at Mirissa beach

Mirissa is designed for simply relaxing and enjoying the beach life. But if you really want to get up and do some action, there are a few things to do at Mirissa beach which can keep you busy for a day or two, maybe three!

Mirissa beach is one of the most popular beaches in Sri Lanka to do surfing. Particularly the western end of the bay has bigger waves which makes it perfect for surfing. You can rent a surfboard at one of the surf shacks for around 400 LKR per hour. 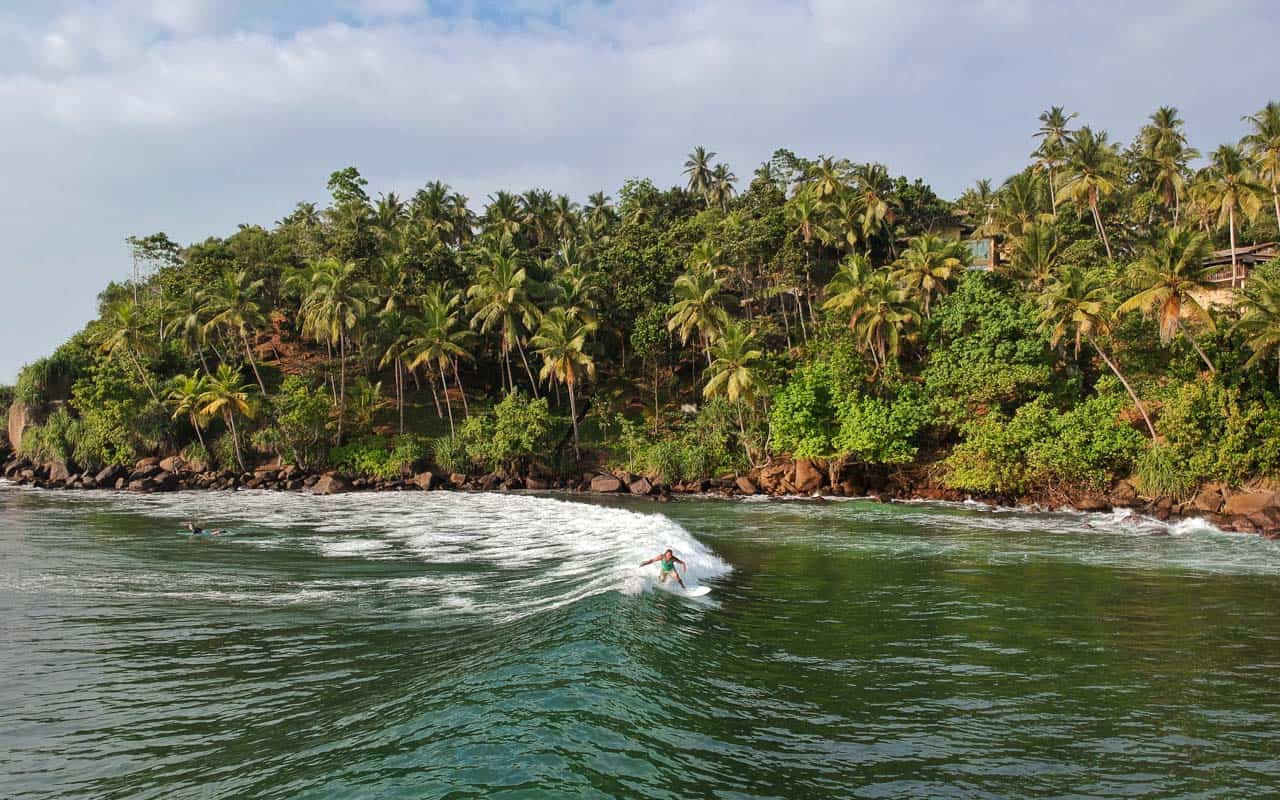 The Parrot rock is a small island which is connected with a bridge to Mirissa beach. It is really fun to climb the rock to get an amazing view on Mirissa Beach. This is especially in the afternoon a great thing to do to watch the sunset from this spot. 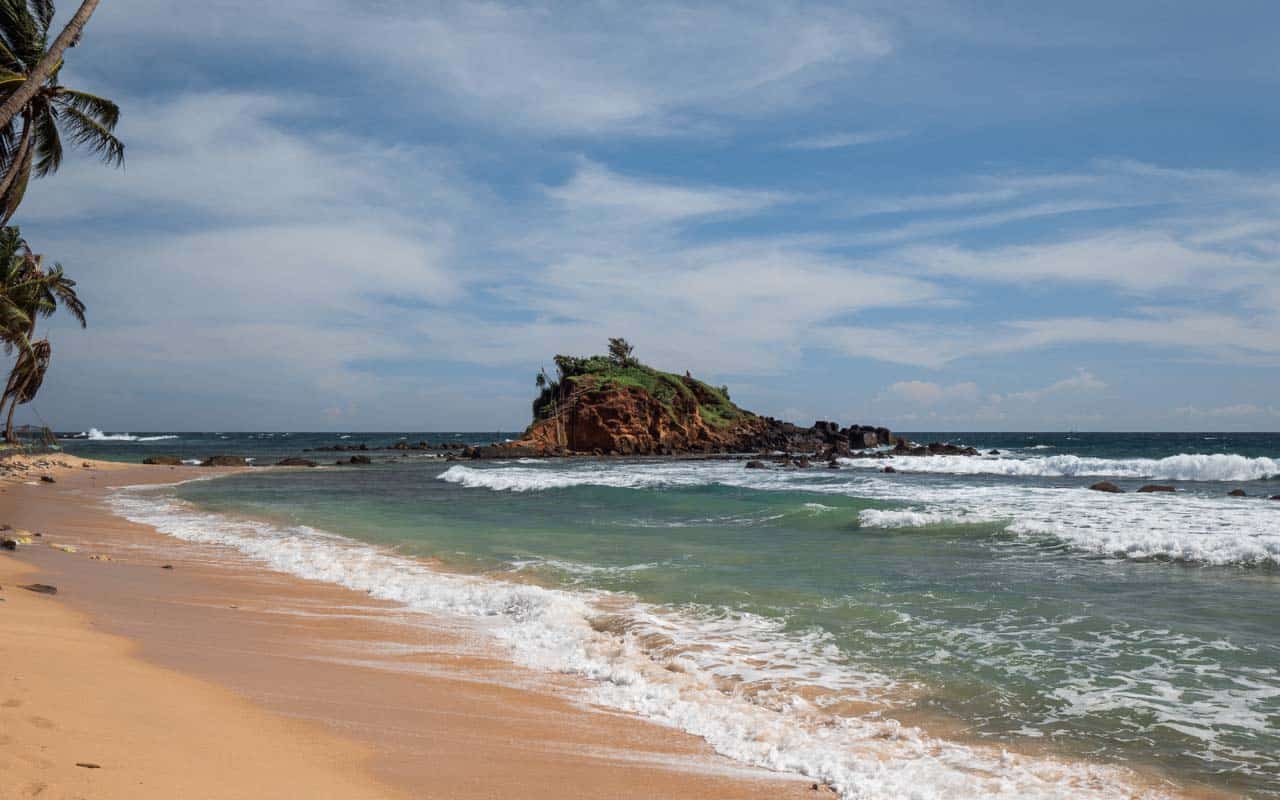 There is enough space on Mirissa beach to spread out your towel and take in the beach life for a day. You can also rent sun beds if you want to make it yourself a bit more comfortable.

Eat and drink at the restaurants 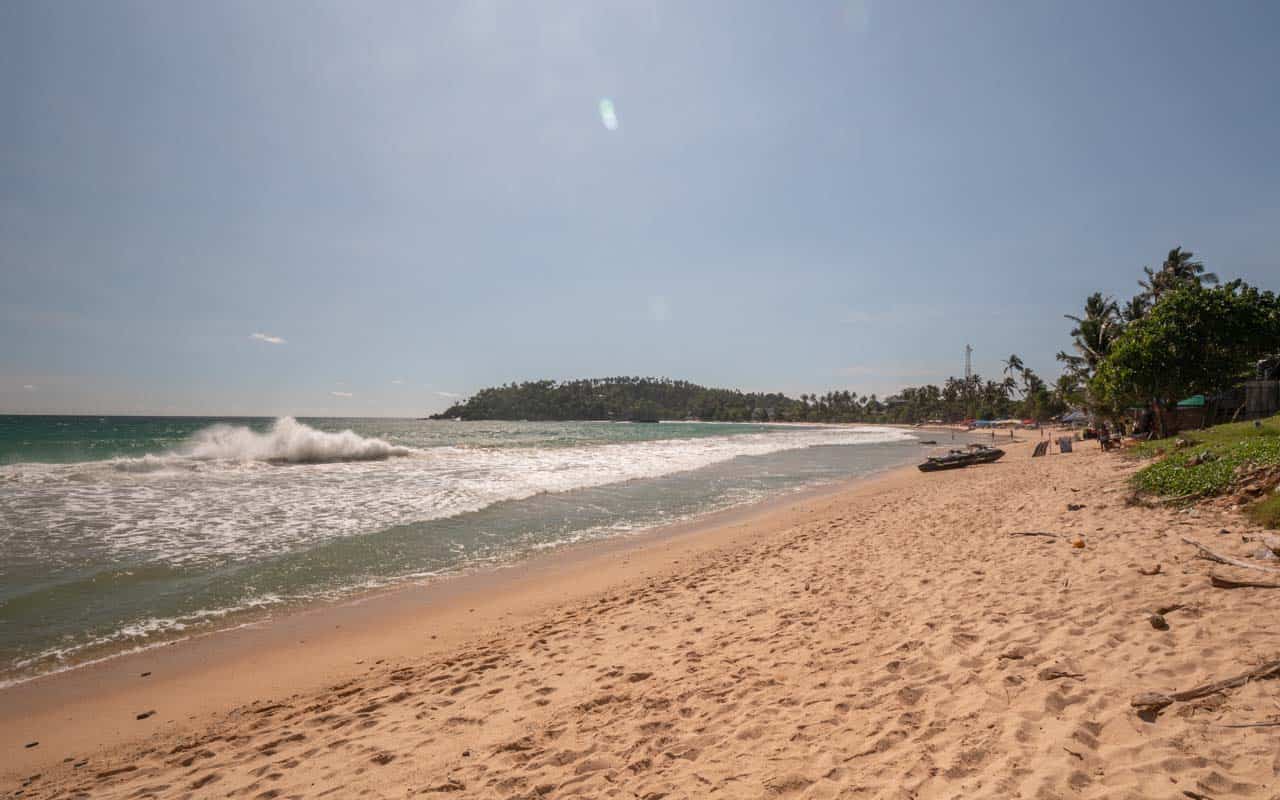 Things to do around Mirissa beach

Mirissa is a great place to go whale watching. The whale watching season in Mirissa runs from November to April but for your best chance to see a whale you have to visit in March or April. There are many tour companies that offer whale and dolphin watching tours. If you are lucky you can get to see many different types of whales and dolphins. For example Blue whales, Bryde’s whales, Sperm whales, Fin whales and Orca’s have all been spotted along the coast of Mirissa. Other species that can be spotted are Common dolphins, Bottlenose dolphins, Spinner dolphins, Risso’s dolphins and Striped dolphins. You also have the chance of seeing turtles and various fish species. For example, Bluefin tuna and flying fish, so there are lots of options to spot marine life during a whale watching tour in Mirissa! 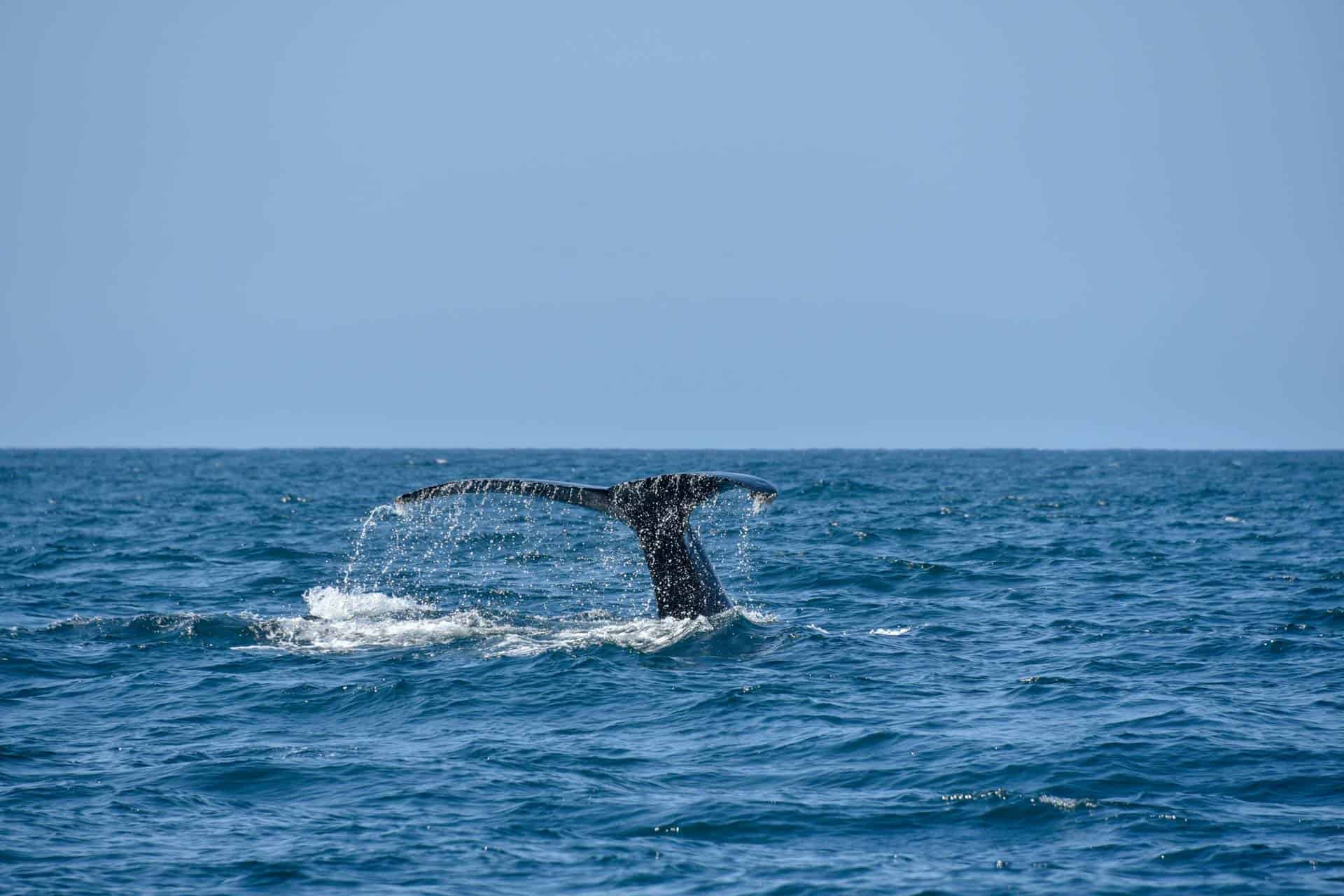 If you want to relax on a more quiet and hidden beach, you might want to check out Secret Beach Mirissa. This idyllic V formed beach with overhanging palm trees was once only known by locals. But since it’s on Google Maps, more and more tourists found this Secret Beach. There is a local bar, the Secret Beach Bar which is located under the trees and is the perfect place to have lunch, a drink and relax in the shade. A perfect hideaway from the more busy Mirissa beach for a day!

Read more about Secret Beach Mirissa in this complete guide 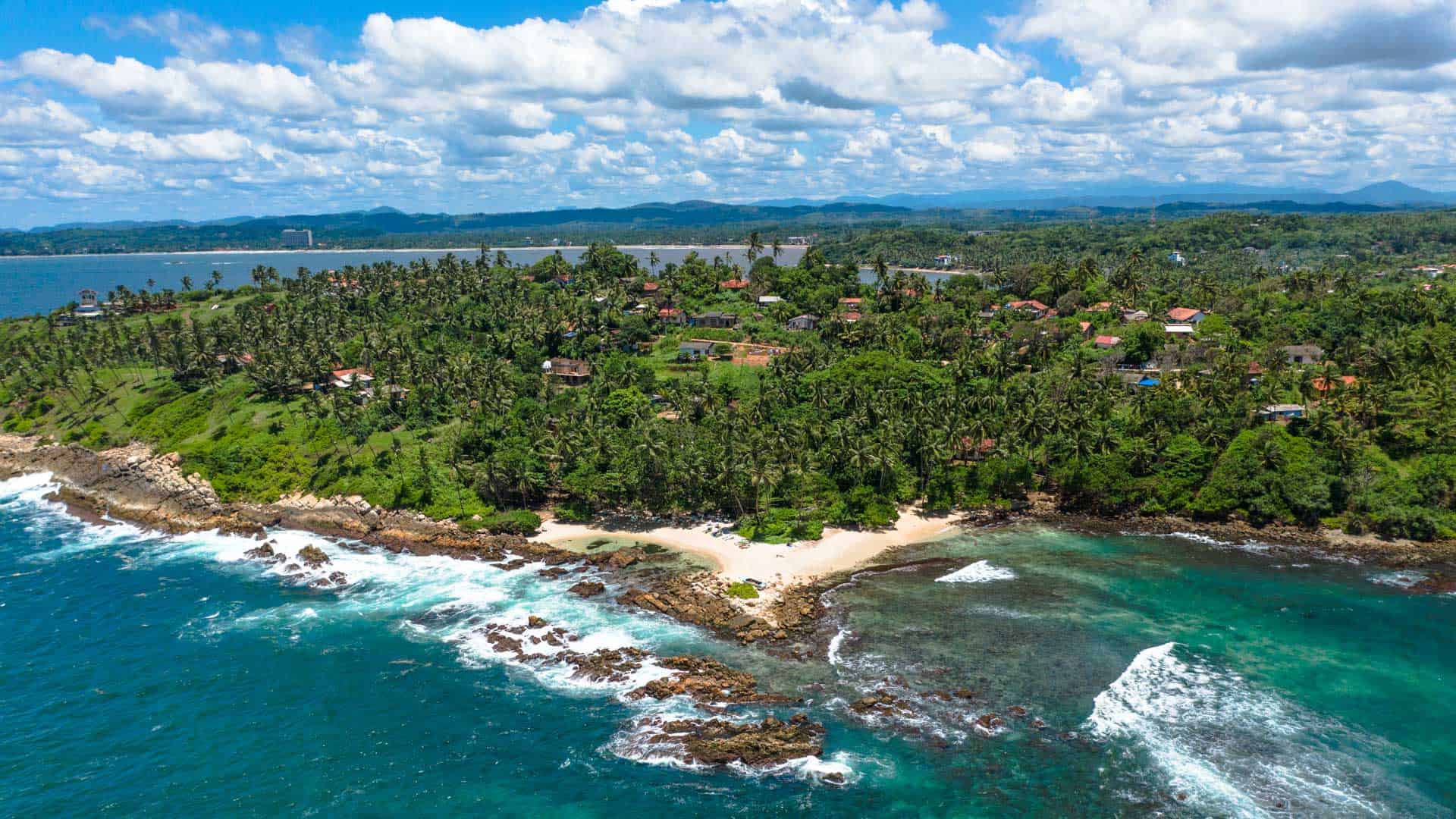 Check out the Coconut Tree Hill

The Coconut Tree Hill gained a lot of attention through Instagram because of it’s beautiful view with the many perfect palm trees lined up. If you’re looking for a quick stop along the coast near Mirissa, this is a fun spot to snap a picture. But to be honest, there are many more hidden spots with many palm trees and sea views. So if you can’t make it to this spot, you’re not missing out on something very special. 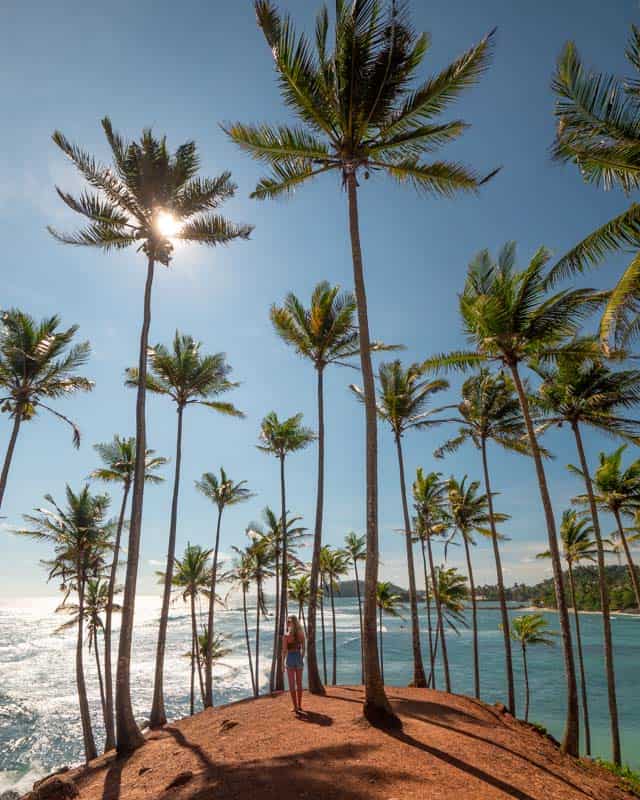 Go to Galle for a day trip

Galle is an Unesco World Heritage Site with imposing Dutch-colonial buildings, ancient mosques, churches and the famous lighthouse. It is really worth it to explore this town. Walk over the thick ramparts which were built by the Dutch merchants that controlled the city in the 17th century. There are also lots of cute boutique shops and cosy cafes and restaurants to fuel your body. 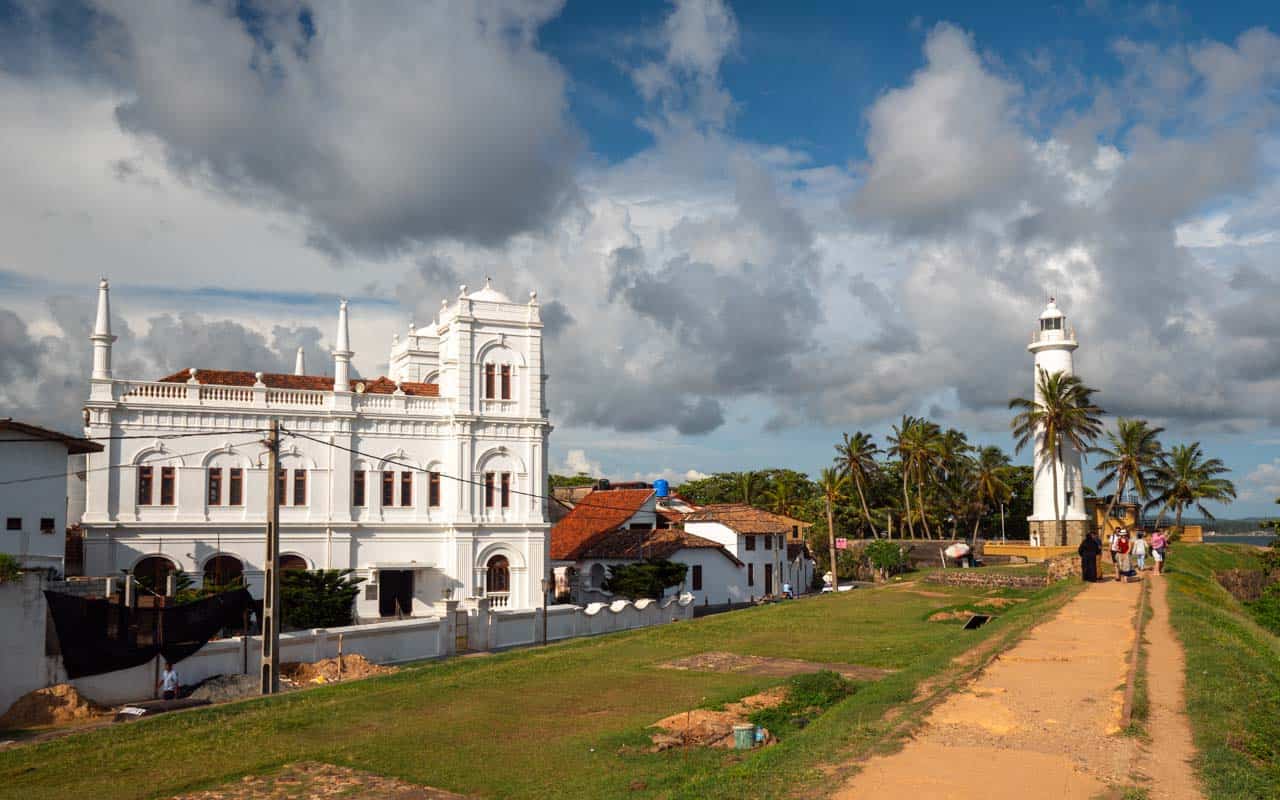 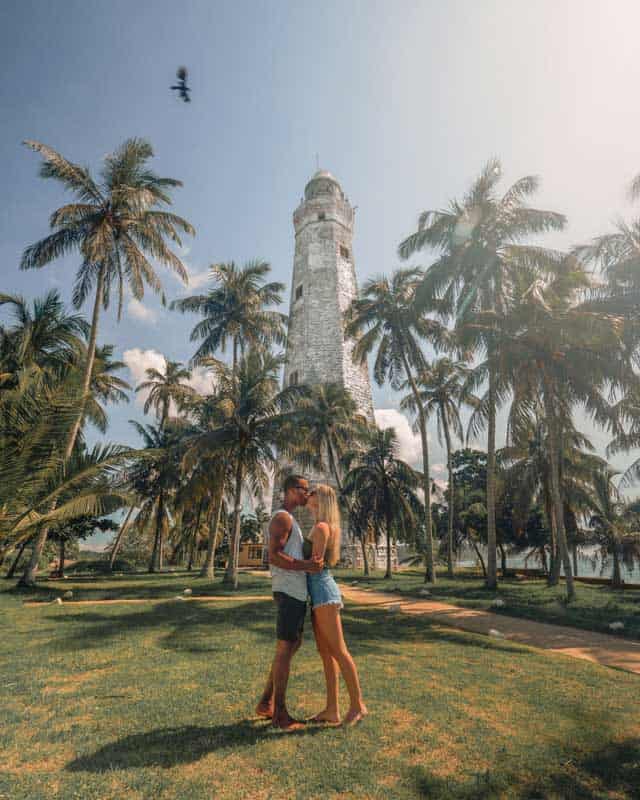 Unawatuna beach is one of the biggest tourist destinations in Sri Lanka and is the most “famous” beach on the island. It is a beautiful banana-shaped beach of golden sand with turquoise water, surrounded by green palm trees. But because this beach is one of the better known beaches in Sri Lanka, it is also one of the busier places. Although, it is a nice day trip if you stay in Mirissa and looking for something different to explore. 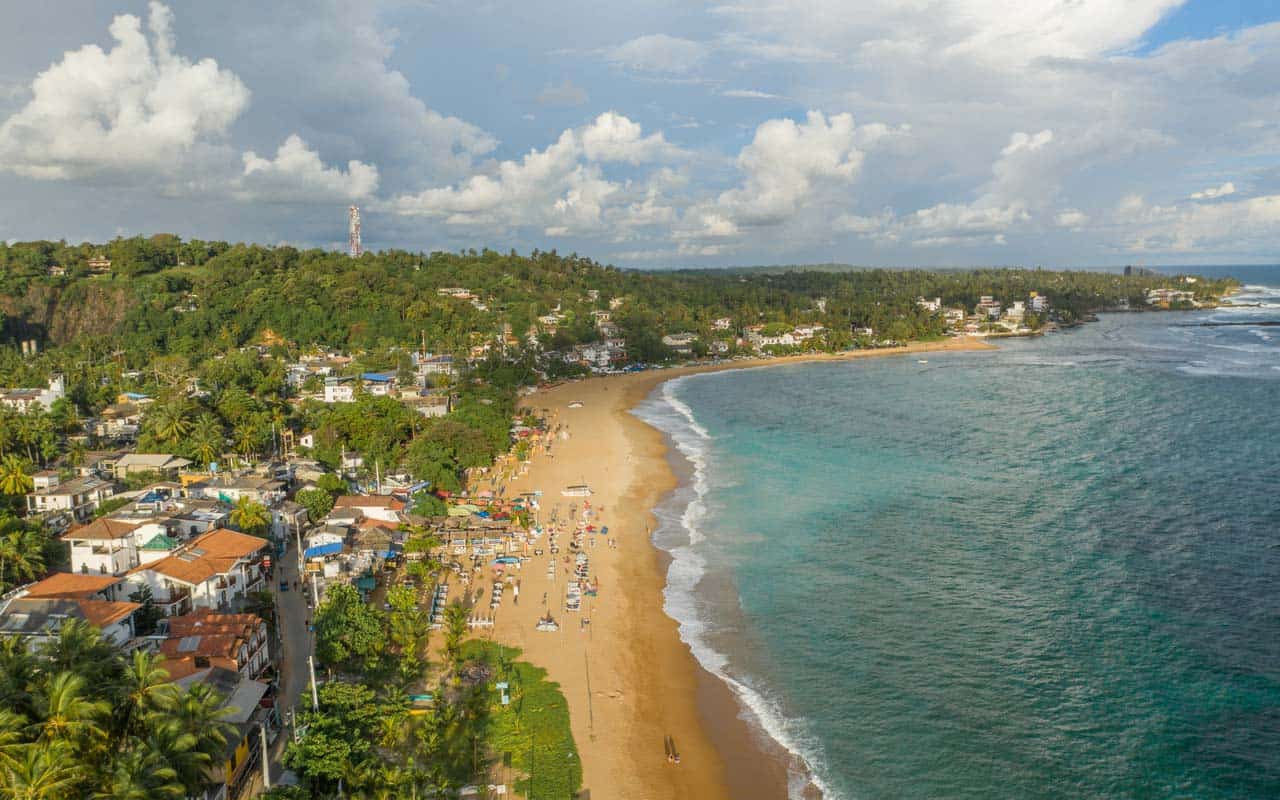 The best months to visit the south coast of Sri Lanka are from January until April and from July until September. In between those months you have more chance of rainfall because of the monsoon. Temperatures in Sri Lanka will be great and warm throughout the year, but on the south coast along the beaches it will always be a bit warmer than more inland.

Click on the title to find all the blogs and travel inspiration you need about Sri Lanka! If you have any questions, let us know! And share the blogs on Social Media with your friends to inspire them to explore this beautiful country as well!

Posted by
Ilse
Hi! Thanks for visiting our Blog. I'm Ilse and my passions are photography, traveling and writing. Together with Atiba we are Digitaltravelcouple and we love to create valuable content for you. That's why we started this blog to share our knowledge about the best places to visit and photo & videography tips. We hope to inspire you to travel more, become a better photo & videographer and enjoy life to the fullest!