WHALE WATCHING AZORES – Everything you need to know 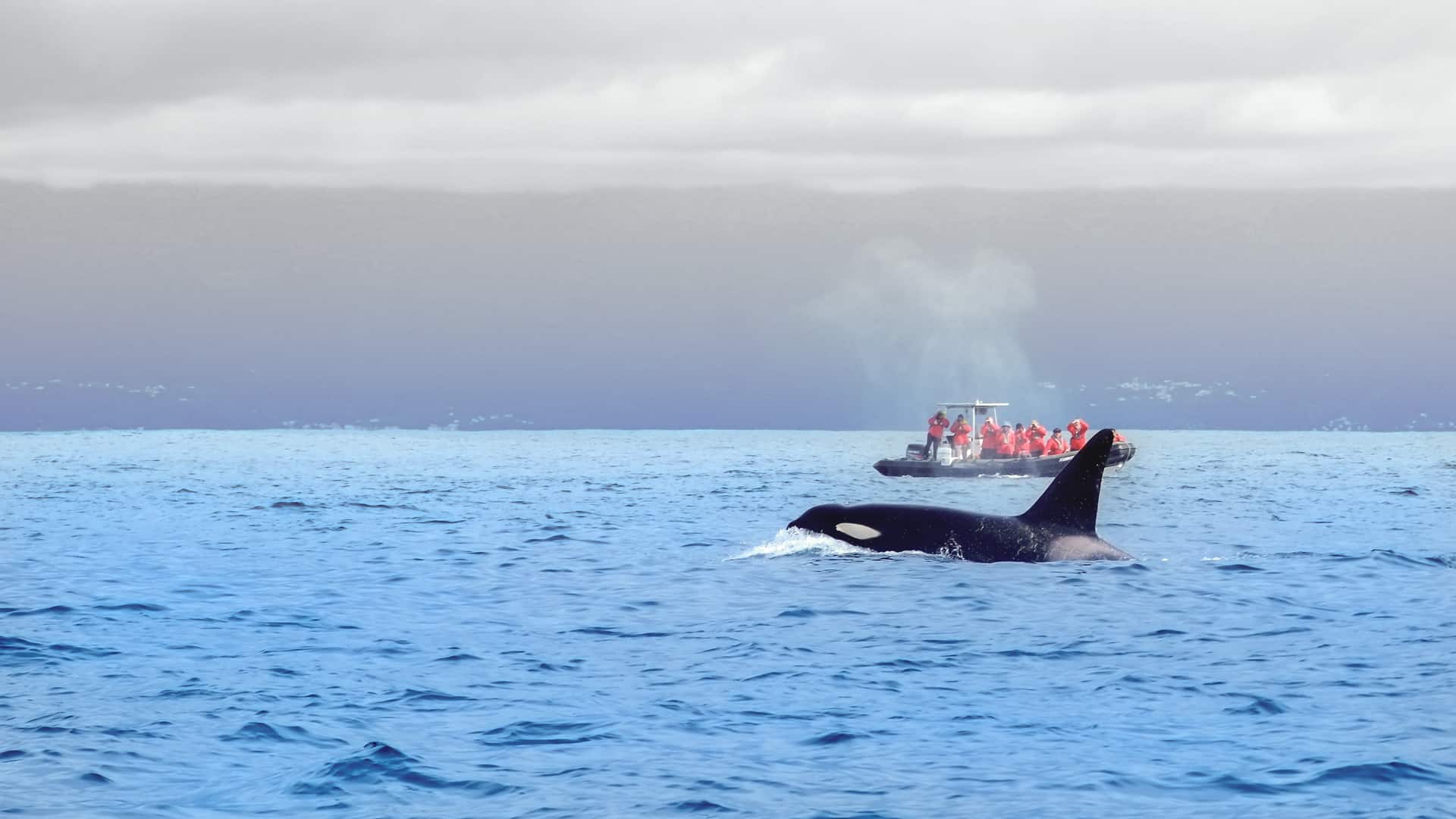 If you’re ready to book, then make your reservation for a whale watching tour from Ponta Delgada here.

From the biggest and most well-known island of the Azores, São Miguel, are a few different options for whale watching tours. It depends if you want to depart from the capital Ponta Delgada, from Vila Franca do Campo (about half an hour from Ponta Delgada) or from the North coast at Rabo de Peixe and with what kind of boat. You can either choose to go with a bigger boat such as a Catamaran, or a smaller Zodiac boat. Both have their pro’s and cons. If you get easily sea sick it is recommended to book the bigger boat. But if you want to get close with the marine life then the Zodiac boat is recommended.

After Sao Miguel is Terceira the biggest inhabited island of the Azores. There are also whale watching trips offered from this island. Because Terceira is less crowded with tourists you might have the chance of experiencing a more serene whale watching tour.

The second biggest island in the Azores also has a lot of whales in the surrounding waters. Over 20 species of whales and dolphins either inhabit or pass the waters around Pico island. With little tourist frequentation, high quantity and diversity of Whales observed and views of Pico as background it doesn’t get any better! 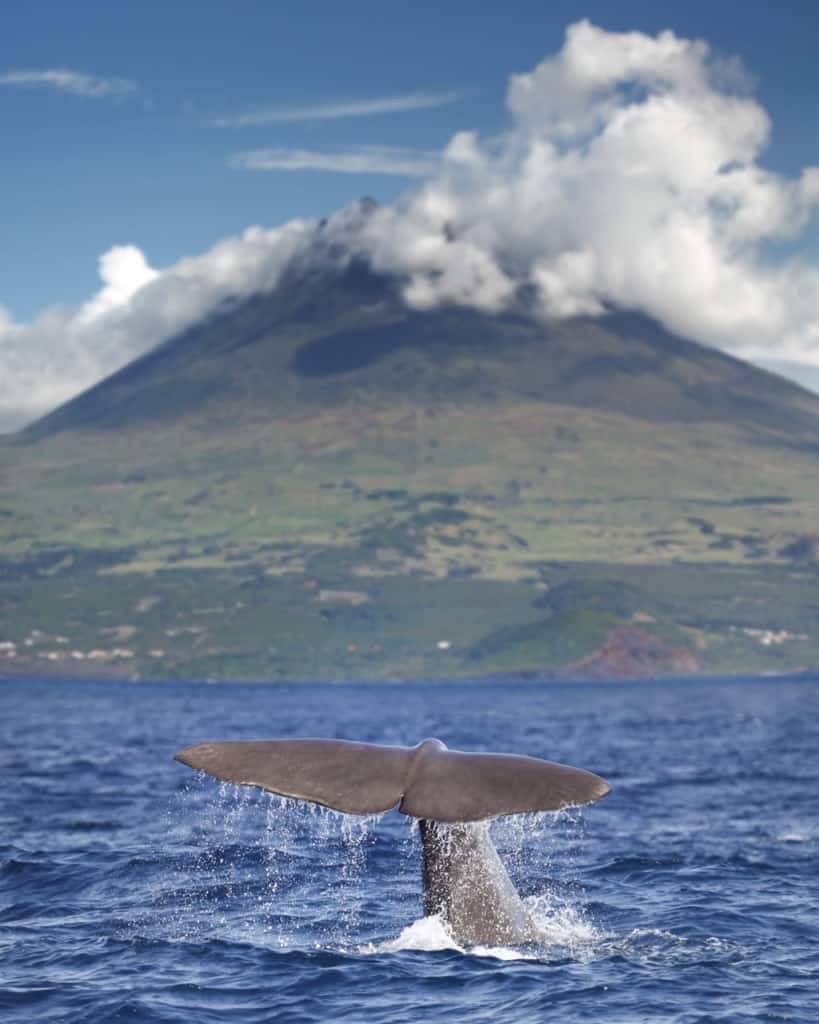 Best time for whale watching in the Azores

Four of the 25 species can be found year round in the waters around the Azores. The common-dolphin, bottlenose dolphin, Riso dolphin and sperm whales are generally easy to spot. But if you want the highest chance to spot the most species and especially whales, then the spring and summer months, April, May, June and July are the best. Because it is mating season in spring the whales are extra active. You might even see one jumping out of the water!

We had our whale watching tour in September during our visit to São Miguel island. The weather was good although unfortunately, we didn’t see many different species but it still was an awesome half day tour on the Atlantic Ocean!

If you’re looking to spot the biggest animal in the world, the blue whale, then you have to go in March, April, May or June. Also the second largest animal, the Fin whale, can be seen in these months.

If you are really really lucky, you might even have a chance of spotting orcas and humpback whales!! But the chances are very small. At most, these whales are only spotted about once or twice a year. 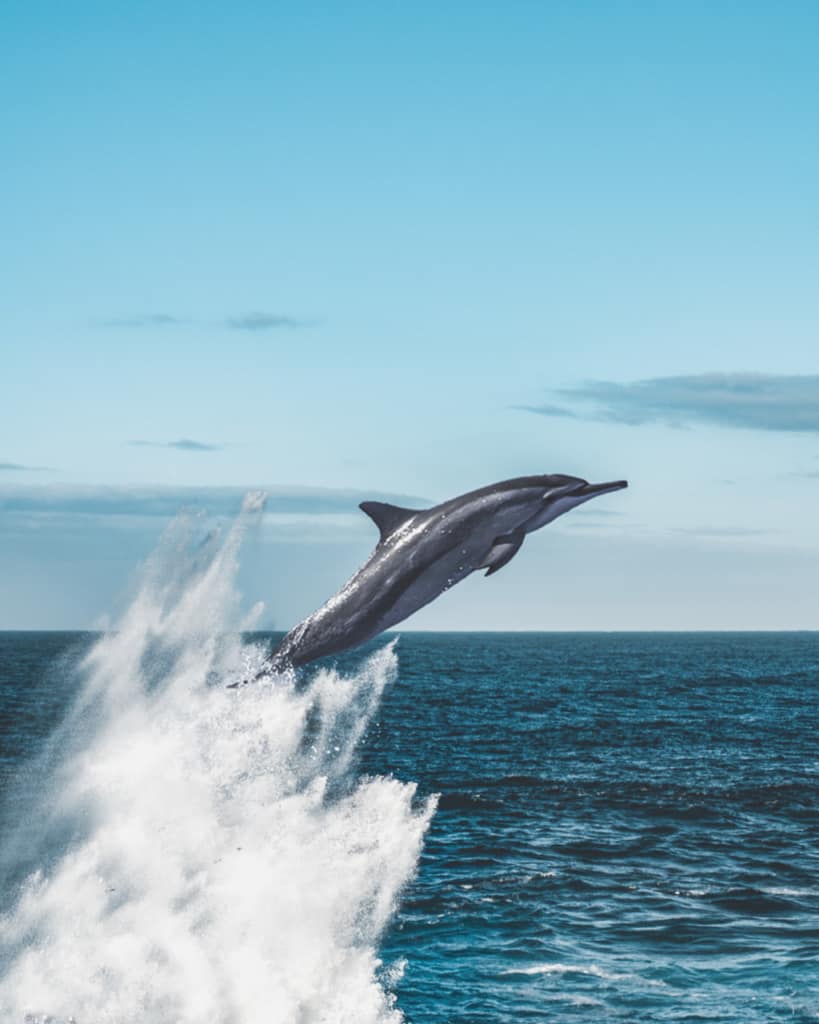 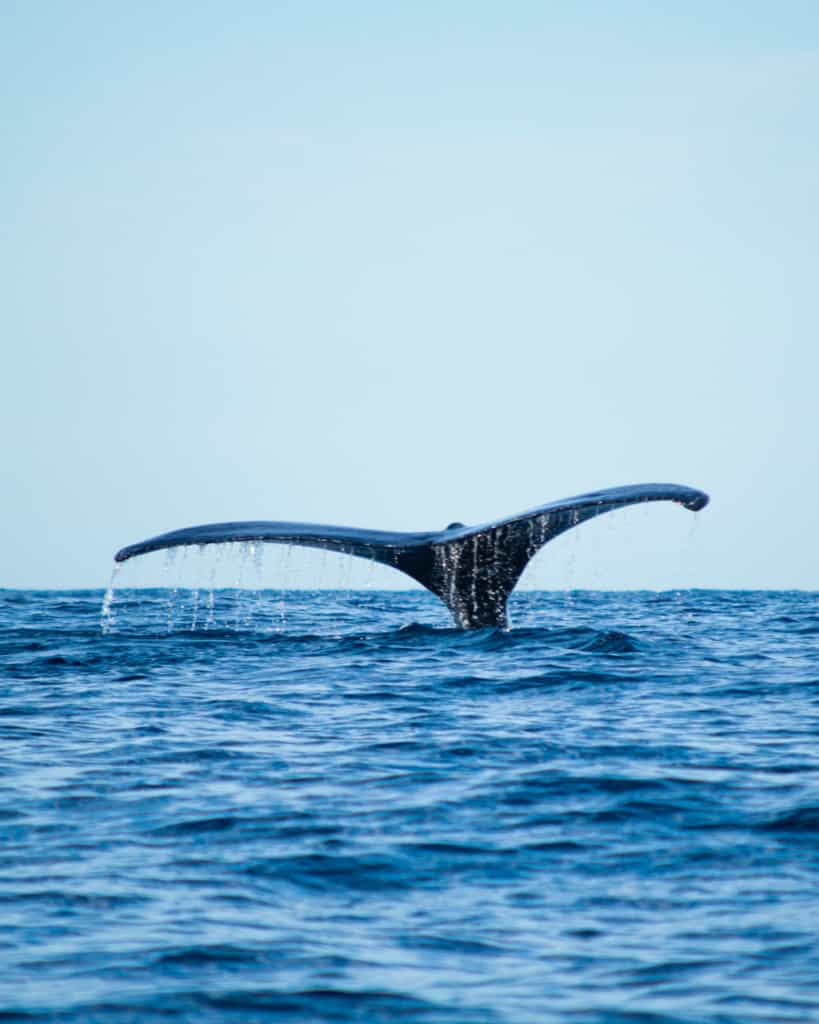 How do they find the whales

Back in the days of commercial whaling there were several spotting points along the coast of the Azores. Powerful binoculars were used to scan the ocean and alert boat crews when a whale was sighted. These spotting points are still in use today by skilled spotters to find the animals. Only nowadays they luckily alert the whale watching boats instead of the hunting parties. These guys are so skilled that they can even tell from miles away which particular species there is, just by seeing their blow. This means that the chances of seeing whales and dolphins are incredibly high as it’s not just ‘guess and go’, because the spotting is done by professionals.

Which whale species can be seen in the Azores

Those worried about the welfare and wellbeing of these amazing sea creatures can rest assured. The Whale watching companies in the Azores all have strict guidelines when it comes to being around the animals. With great respect towards these magical animals the boats are only allowed to approach from behind, never from the front. Boats cannot get any closer than 50 meters. And if there are calves present the distance limit is even 100 meters!

Sometimes the whales and dolphins do come closer because they are quite inquisitive. This is totally fine as it is the animals choice.

If a whale or dolphin seems to be agitated in any way, then the boat must leave the area. And there is also the rule that boats shouldn’t stay in the same area of the same whale for more than half an hour. 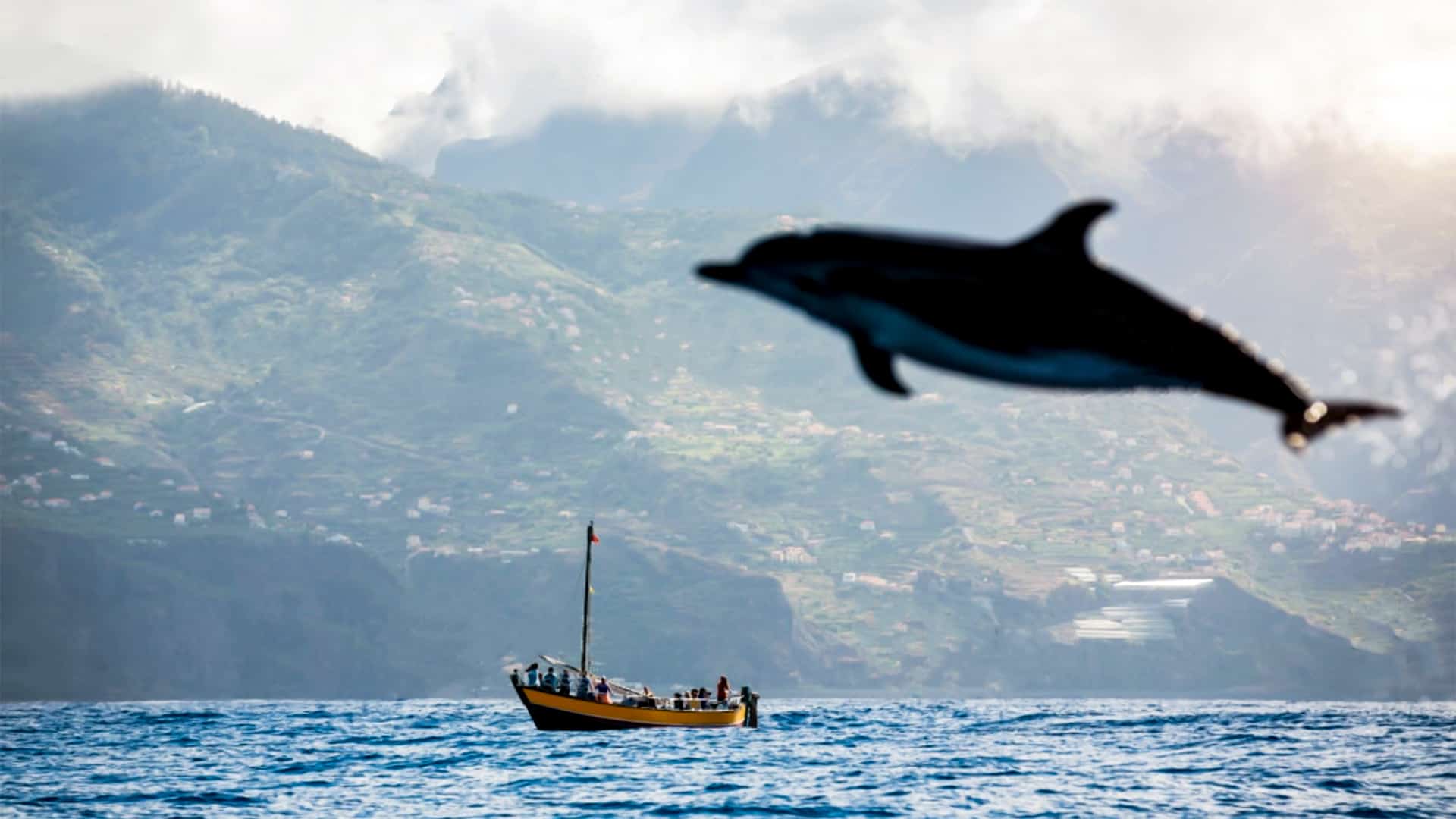 What to expect during whale watching Azores

An Azores whale watching tour is an unforgettable experience. The Azores are without a doubt some of the best places in Europe for whale watching and the views from the Atlantic Ocean towards the islands are just incredible.

Before the whale watching tour starts a marine biologist will explain more about the different species of whales, dolphins, turtles, fish, birds and the overall marine biodiversity of the Azores Islands. Make sure to book your whale watching tour in advance because there are only a few spots open everyday. In the morning and around noon the boats mostly leave for the whale watching tour if the sea and weather conditions are good. If the weather is too bad or the sea too rough your tour will be postponed to the next day.

Things to bring during your whale watching tour 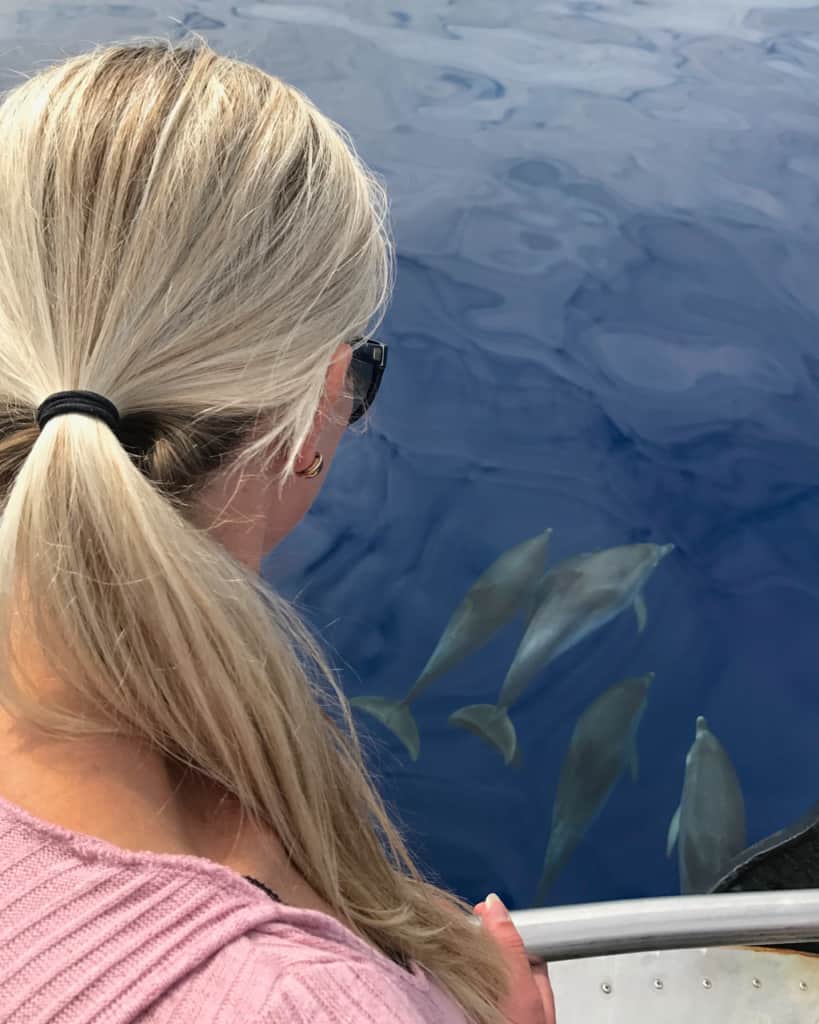 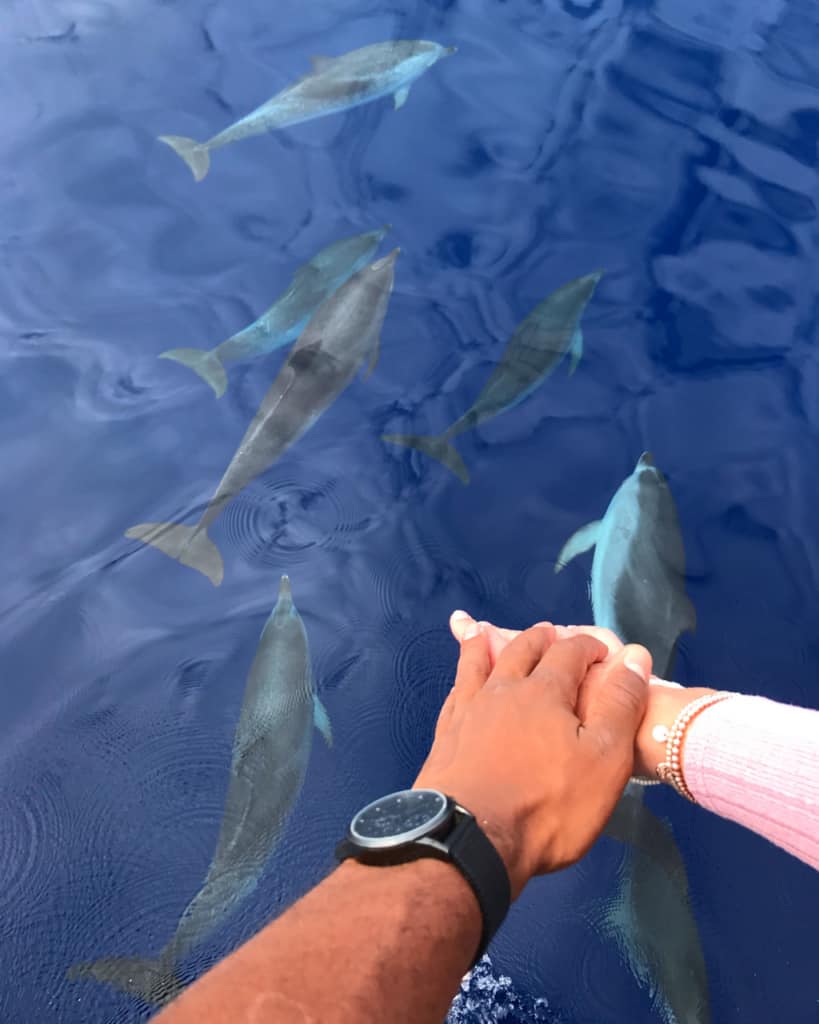 To be well prepared for your whale watching adventure as photographer there are a few things you have to think about to take with you.

Be prepared with the best settings. Read more about that below.

Of course you want to capture that special moment when a dolphin (or whale!) jumps out of the sea or when the tale of a whale is visible. This takes a little bit of luck and practice to have your camera pointed on that specific part of the sea where the whale comes up.

You need to shoot manual here as you want to adjust the shutter speed and aperture to get the best results. The best thing to do is to set your shutter speed above 1/250 so the movement of the whales and dolphins will be sharp. If your camera has the option to shoot burst, use this! It will help you to get the perfect shot, but be sure to have enough memory card space 😉

Depending on the aperture of your lens, you can use an aperture of F5.6 to be sure you have everything in focus. Also don’t forget to put your Image Stabilization on your lens ON! Because you’re on a wobbling boat in the water there is a chance that you give little shaky movements to your camera. You don’t want blurry shots because of your shaky hands, so be prepared and put the Image Stabilization on your lens ON.

Read more about how and when to use Image Stabilization here

Most important is to have your camera shoot ready. As soon as there is action, you will be the first capturing that magical moment! But also don’t forget to enjoy the tour and watch with your eyes instead of through your camera constantly. It is always such a magical experience to see these wild and big animals in their habitat!

For more travel inspiration about the Azores and the other Portuguese island Madeira, head over to our other travel guides.

25 best things to do on Sao Miguel island

50 best things to do on Madeira