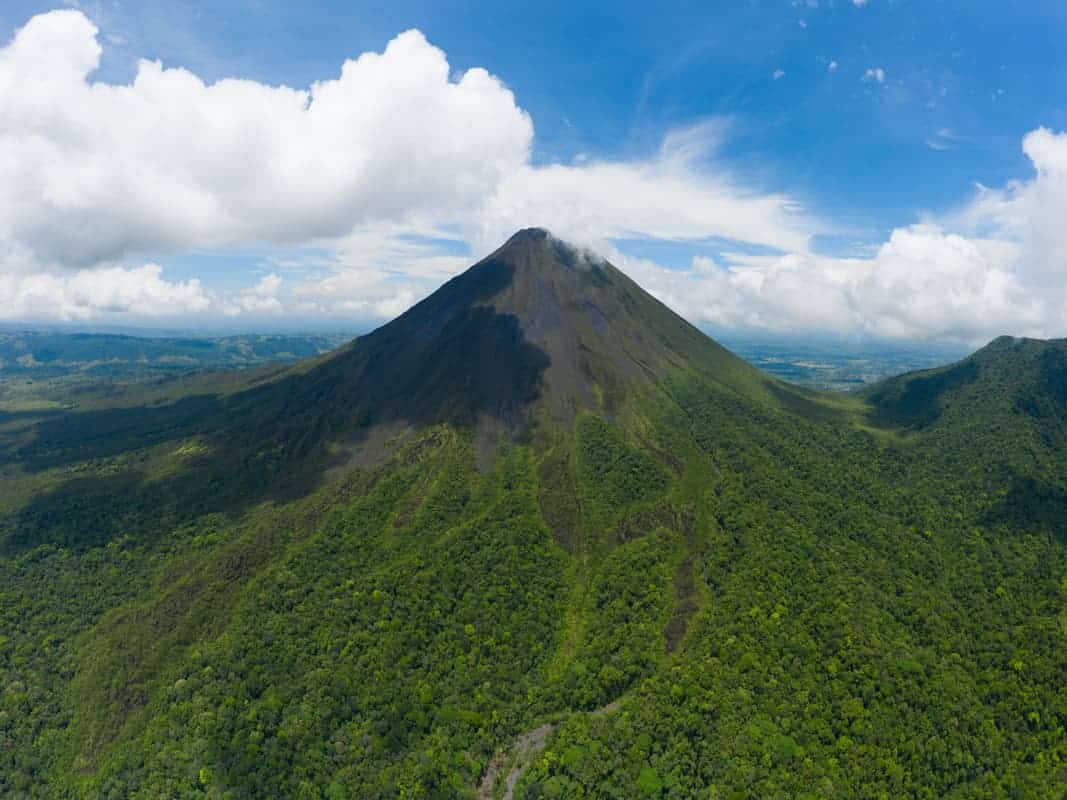 Best time to do the Arenal volcano hike

When hiking in Arenal you obviously want to have a clear view on the volcano. The highest chance to see the majestic Arenal volcano is early morning because the clouds often like to come in the late morning, early afternoon to cover Arenal volcano. However it can be also super cloudy when you’re in La Fortuna, making it super hard to see the whole volcano. The best months with clearest weather are December/January until April which are also the best months for hiking in Arenal. There’s always a chance that clouds will obscure the top of the volcano, no matter which period you come. But if you stick around for a couple of days to explore some of the other things to do in La Fortuna, then there’s more chance to get clear volcano views.

There are several hiking trails that can give you a beautiful perspective on Arenal volcano in La Fortuna. You will go through rainforest, walk over the lava fields from previous eruptions and pass some incredible vantage point of Arenal volcano. If you’re looking for an adventurous but risky hike to the summit of Arenal volcano, then keep in mind that it’s illegal. However, there are loads of guides in La Fortuna that are willing to lead you to the crater at your own risk. Below an overview of the Arenal volcano hikes. 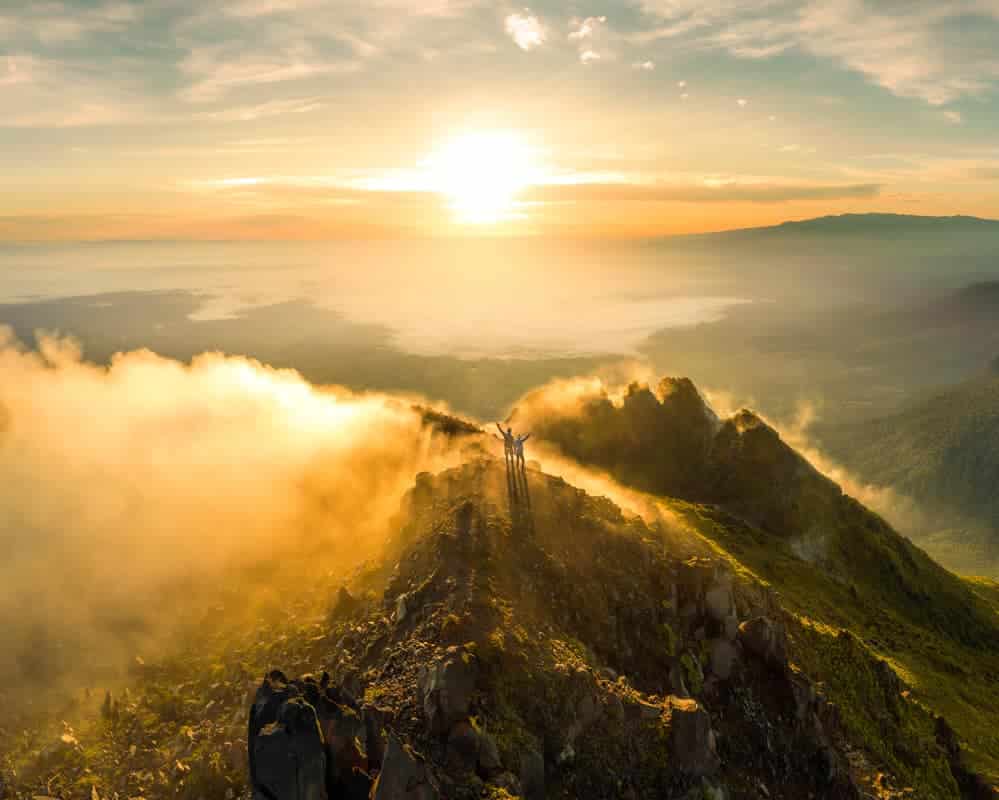 The Arenal Observatory Lodge and Spa offers some spectacular landscape sceneries and wildlife viewing opportunities in Costa Rica. The total of 11 kilometers (7 miles) of hiking trails, two observation towers and two hanging bridges provides unique experiences in the Arenal Volcano National Park. And the best thing is… you don’t have to be a hotel guest to experience the 350-hectare nature reserve at the Arenal Observatory! 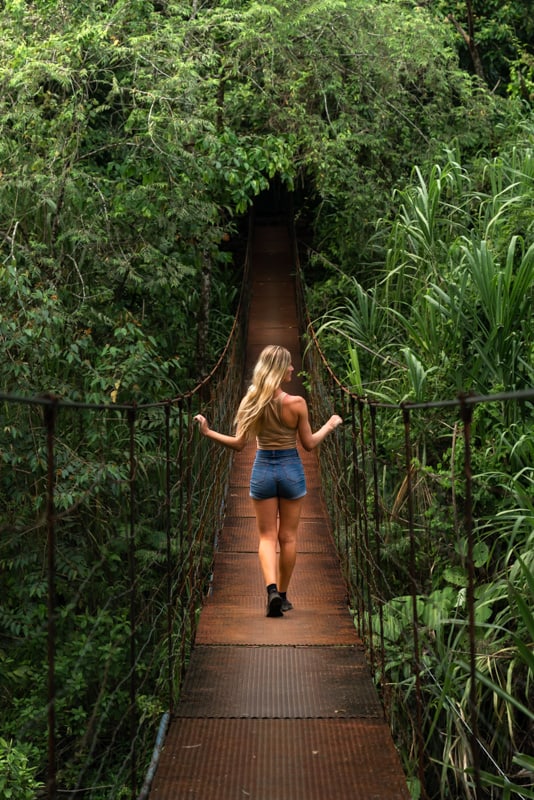 There are 5 trails at the property of Arenal Observatory Lodge all providing different views. The waterfall trail leads you to a 6 meters tall (20-foot) waterfall. This short and easy walk takes only 30 minutes one way. Saino trail is a paved trail of only 800 meters that shows the hotel gardens and rainforest. From this trail you’ll have excellent views of the Arenal Volcano. Another very short path is La Hormiga trail which is 450 meters one way and goes through the rainforest. You might have a chance of spotting coatis, sloths, anteaters, monkeys and several types of birds. The river trail is another short hike that goes from the observation deck at the hotel down to the Agua Caliente River. Lastly, the Los Cangrejos (Crabs) Trail is a 500 meter hike that cuts through primary rainforest where you can spot many different wild animals along the way. 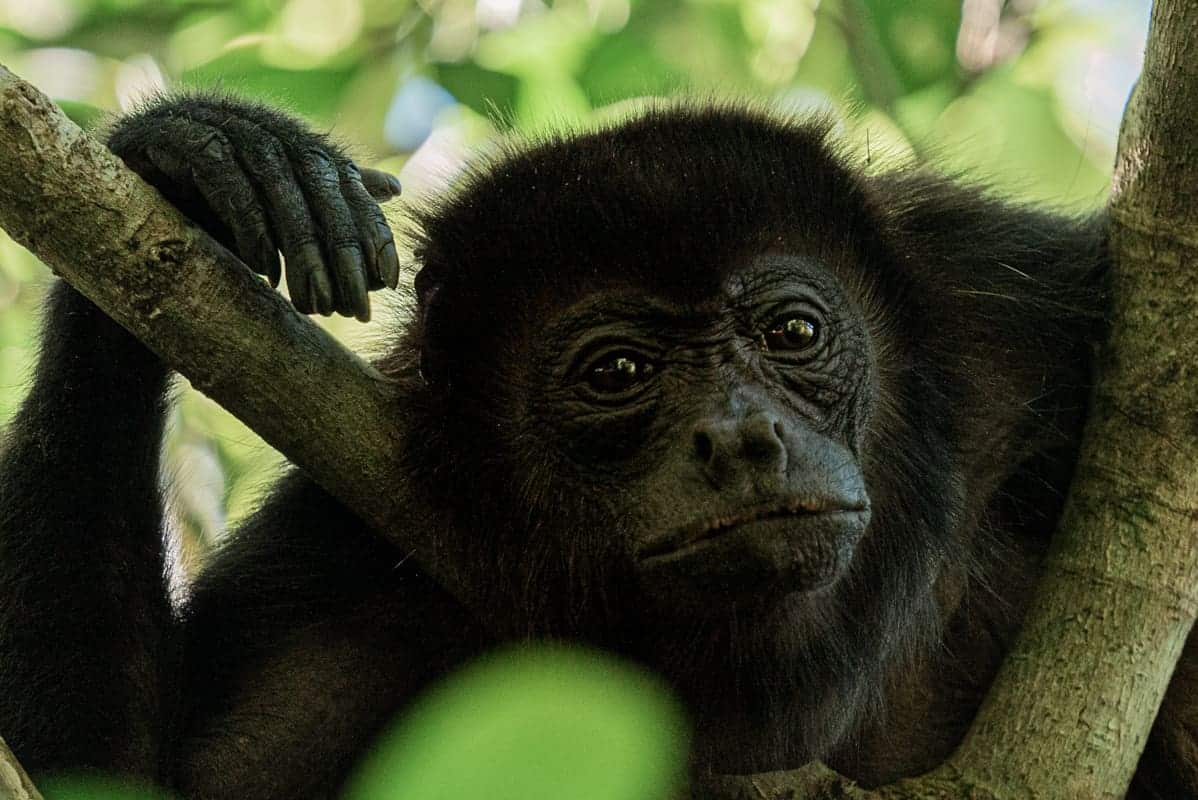 One of the private reserves to do the Arenal volcano hike is the Arenal 1968 trails, which is right next to the National Park and got its name from the Arenal Volcano eruption of 1968. There are two hikes you can do in this park. The so called ‘Sendero Coladas’ of 2,5 km which refers to the lava flows of 1968 and the ‘Sendero Bosque’ of 4,5 km that goes through the rainforest. Along the hike you can enjoy the impressive views of Arenal Volcano and Lake Arenal.

Entrance fee and opening times Arenal 1968: $17 USD for adults and children under 12 are free. The opening times are every day from 8 AM – 6 PM. 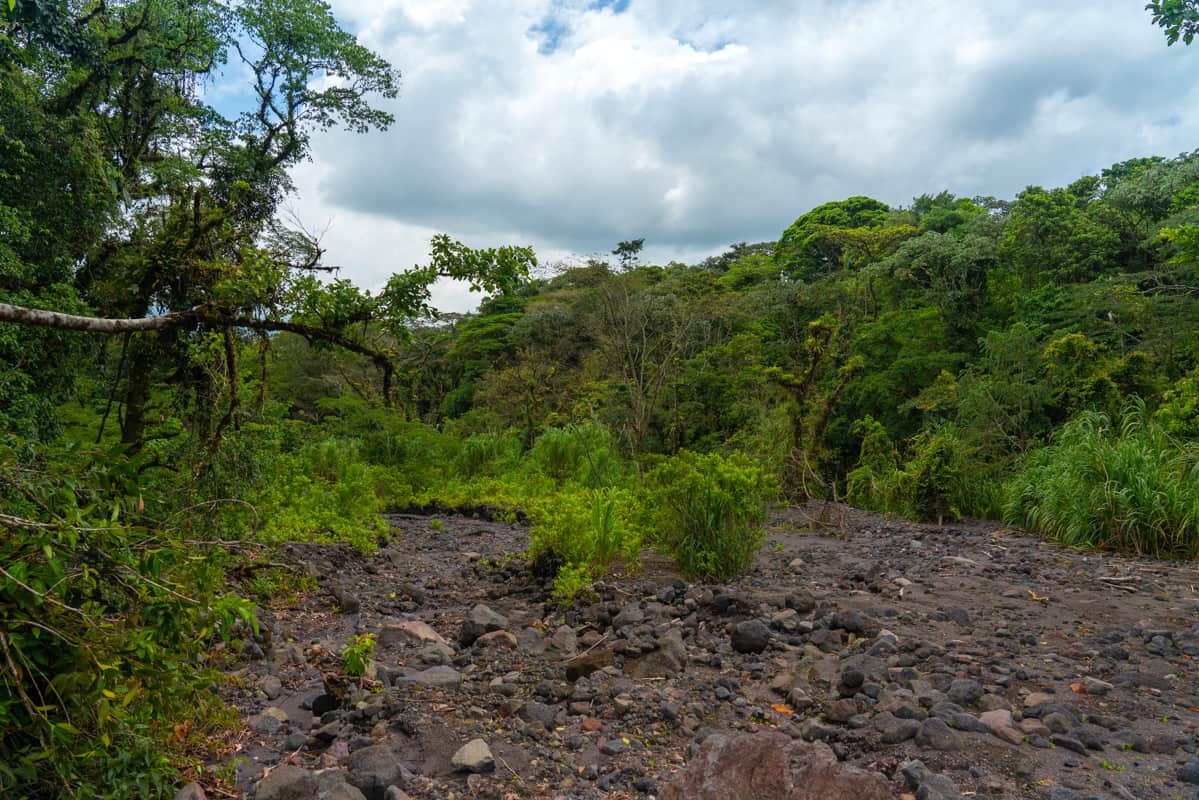 Los Tucanes is one of the longer Arenal hiking trails with an 3.8 kilometre circular loop. It will take you anywhere between 2 to 2,5 hours of hiking and costs $10 per person. The entrance is on the way to Arenal Observatory Lodge. Los Tucanes starts at the end of Las Coladas and goes through the rainforest towards Rio Agua Caliente. First you will pass a hanging bridge and walk the first kilometres through the rainforest. Halfway the hike you will walk over the 1992 lava fields with unobstructed views on Arenal volcano. Eventually, there is an old lava trail extension that leads to Arenal Observatory Lodge. The hike to Cerro Chato is officially closed, but there is always a way to get up with a guide. Ask around and you’ll soon enough get a lead. 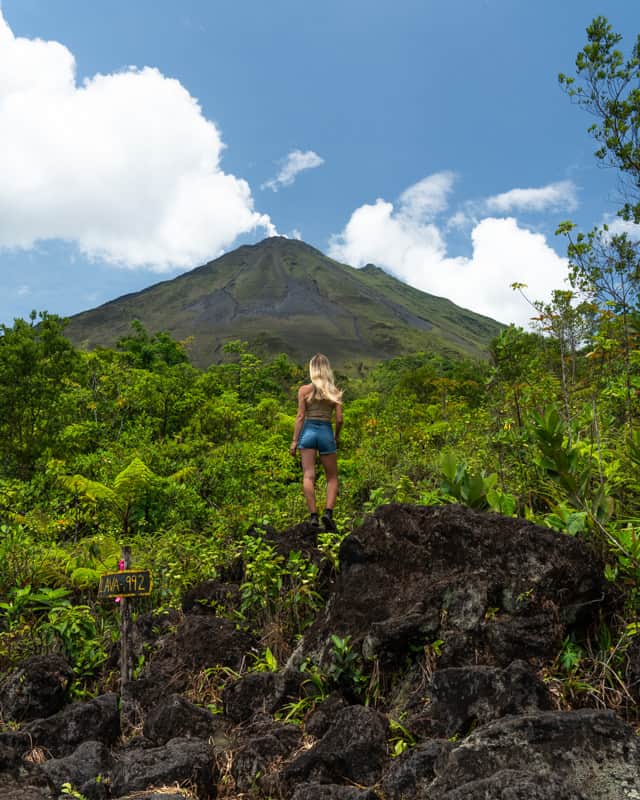 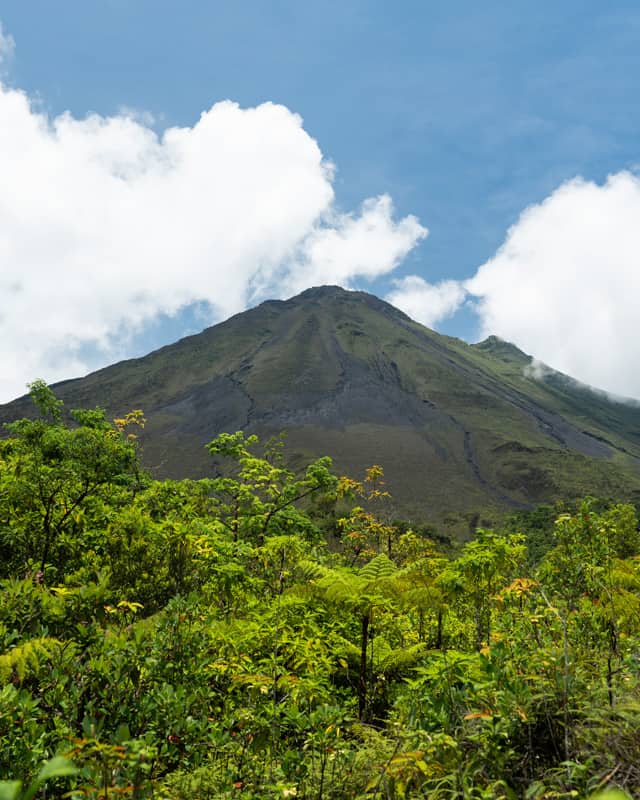 The several hikes in this park are Heliconias, Los Miradores and El Ceibo trail. They are all relatively short between 2 to 3 kilometres and give just like the other trails wonderful views of the lava fields and Arenal volcano. It’s a great family activity as the hiking trails are fairly flat through the rainforest and only at the lava fields are some uneven parts.

Entrance fee & opening times Arenal Volcano National Park: $15 USD for adult foreigners and $5 USD for children. The park is open every day from 8 AM to 4 PM. 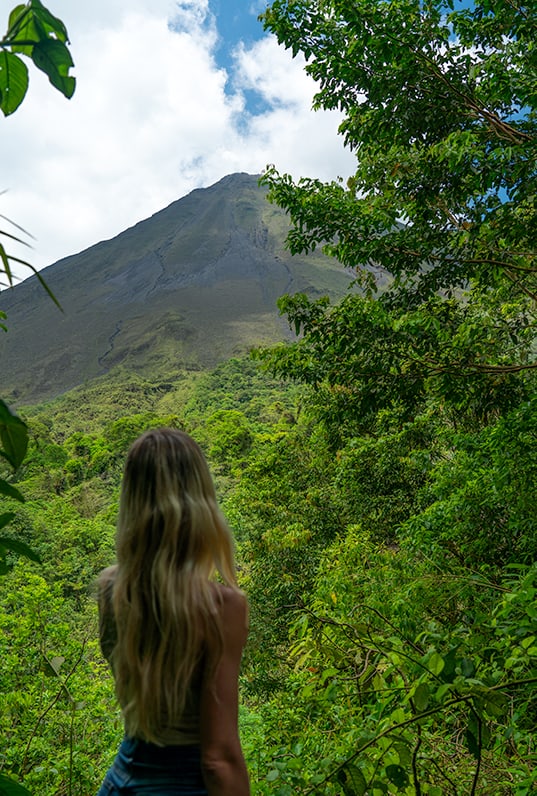 The hike to Cerro Chato is officially closed from La Fortuna waterfall due to erosion. However, there is another way to get up with a guide. Ask around at Arenal Observatory Lodge and you’ll soon enough get a lead. The hike goes to the lesser-known dormant volcano, Cerro Chato. It’s not a hike for everyone concerning the incline and off the beaten path trail. However, it’s a once in a lifetime experience to hike to the crater of a dormant volcano and cool off with a refreshing dip in the crater lake. The trail distance is 3.2 kilometres one way which will take anywhere between 2 to 3 hours. 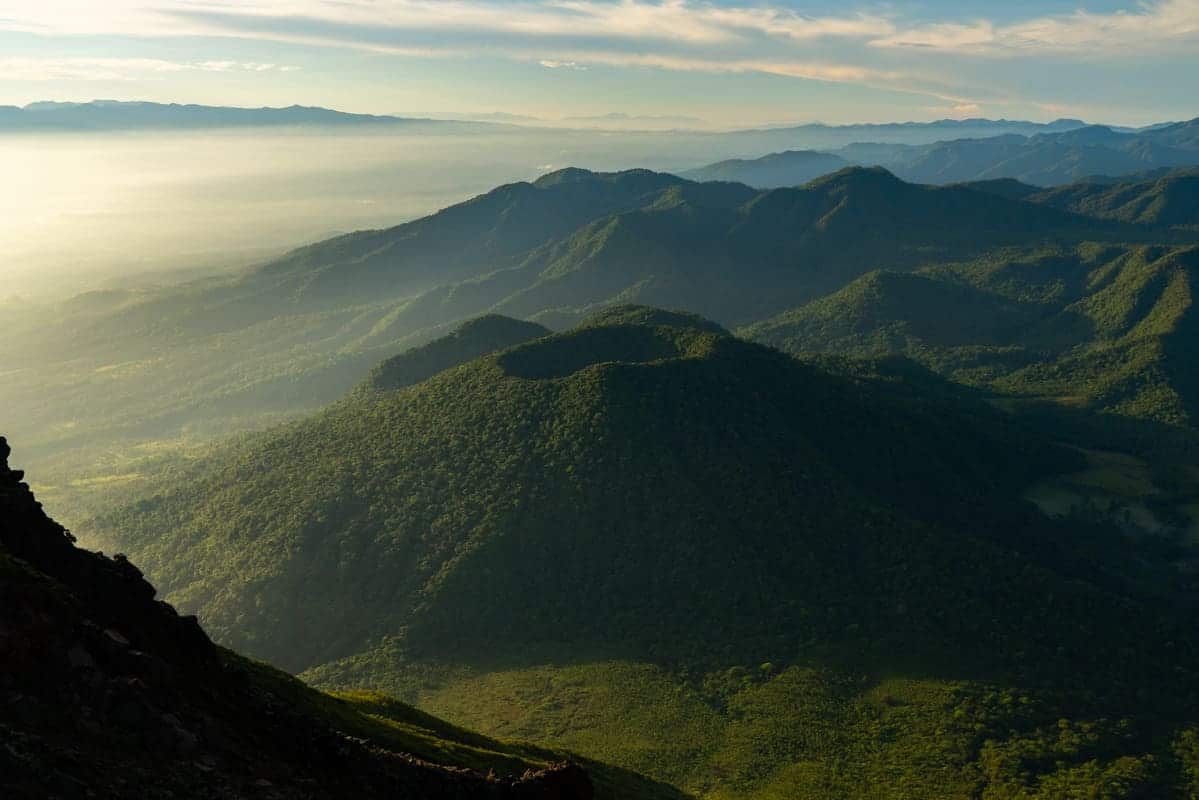 Can you hike Arenal volcano summit?

The official answer is no, it’s illegal. The answer you’ll get on the streets in La Fortuna is yes, you can. At your own risk and only with a guide of course! There’s no way you can hike Arenal volcano by yourself. That would be super dangerous because it’s very hard to find the trails and you have to cross some private property. Keep in mind that if you decide to do this adventure, it’s 100% your own risk. But oh boy, how worth it is it to stand at 1633 meters height on an active volcano… 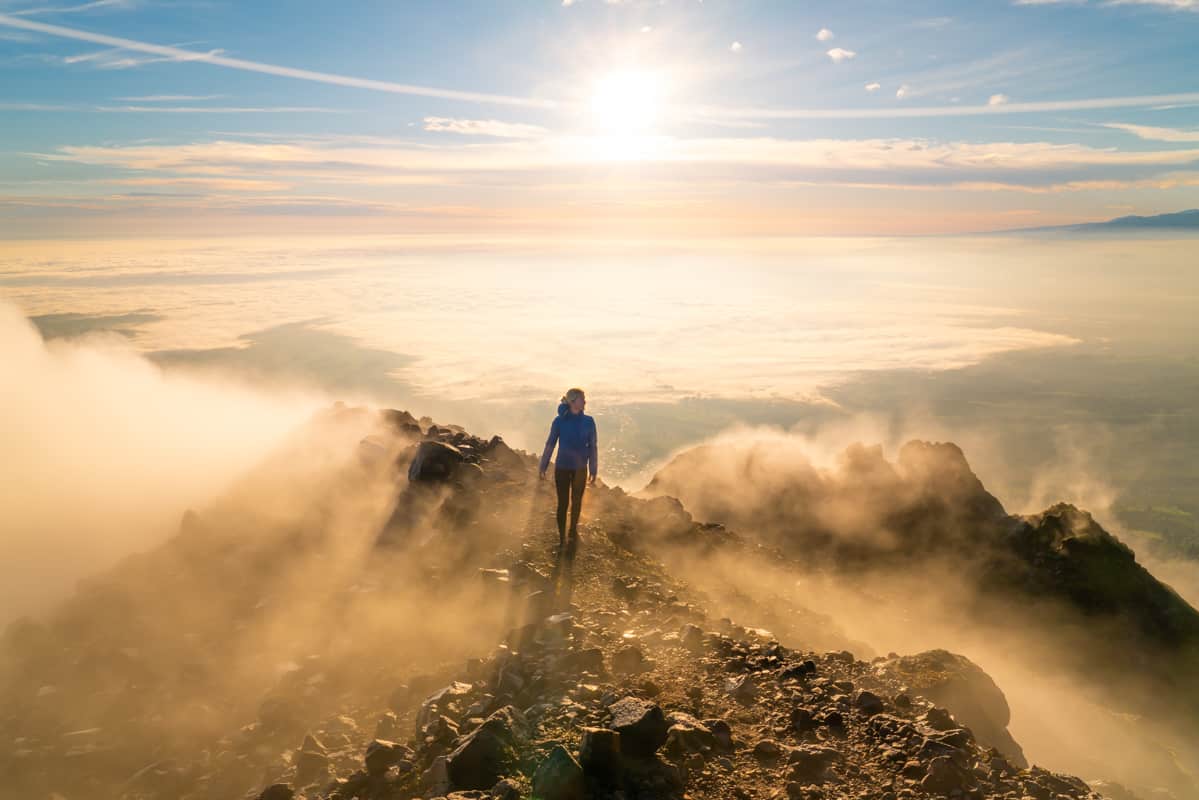 We have hiked volcanos before in Indonesia so we knew a bit what we could expect and we are well trained hikers. However, hiking to the top of Arenal volcano was another level. It’s só steep, you almost can’t imagine how vertical you are hiking. Which makes sense because you start the hike to the summit of Arenal volcano literally at the foot of the volcano which is on 253 meters. The top of Arenal volcano is at 1633 meters which means you have a total incline of no less than 1380 meters! The total time to climb Arenal volcano is about 3-4 hours one way, so if you want to watch sunrise on the summit of Arenal, then you will have to depart at about 1 AM. The total distance up and down Arenal volcano is 13 kilometres. Overall this is an incredible and unforgettable experience but only for the fit people that are not scared to take a little risk. Because in the end, these are the stories and experiences we will always remember, right?

If you are serious about climbing Arenal volcano, then send us a private message to get you in contact with our guide! 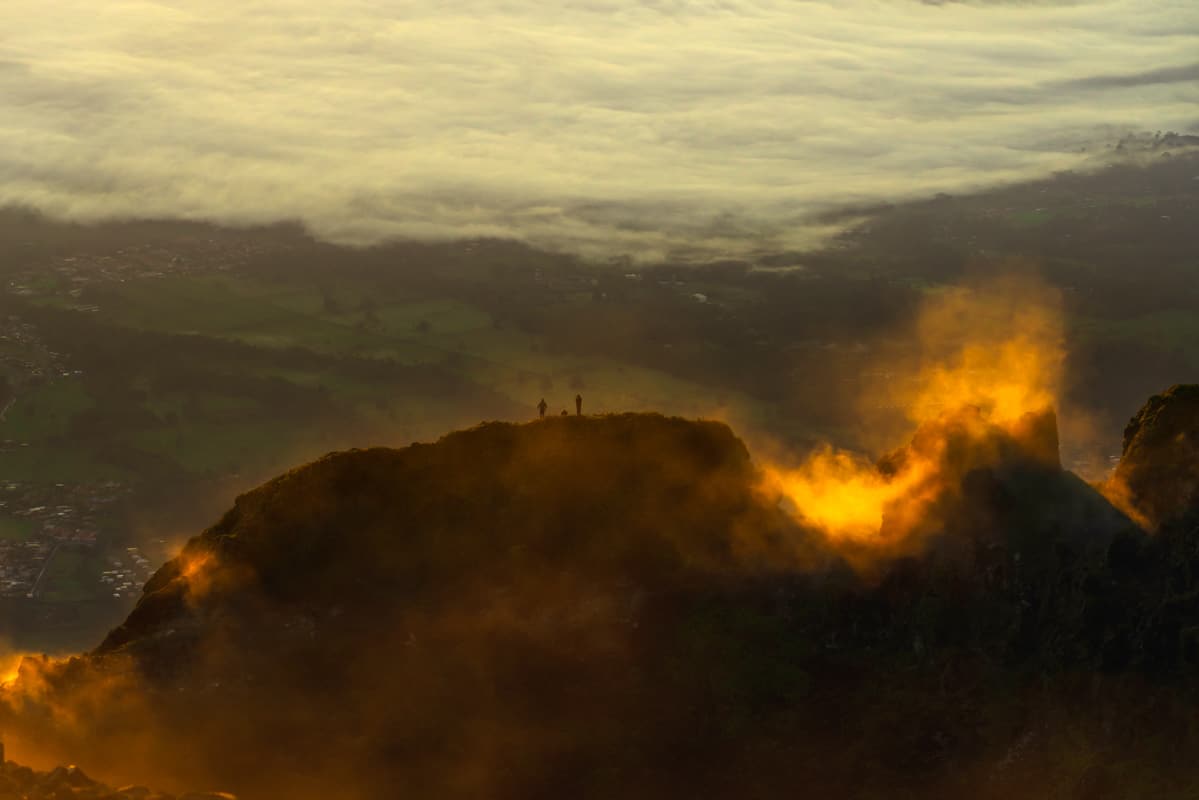 I hope you enjoyed this blog post about the epic adventure hiking up Arenal volcano in La Fortuna, Costa Rica. If you have any questions about this experience, don’t hesitate to send us a message or comment under this post.

For more Costa Rica travel tips, head over to our other blog posts.