Besides the beautiful beaches, untouched Gili Islands and impressive waterfalls in Lombok, there is also a small system of caves on the hillside behind Kuta Lombok. In these underground caves you can find thousands of bats hanging on the roof. But, that’s not the only thing. At a certain time, depending on the positioning of the sun, the sunlight creates magical light rays through the hole in the roof of the cave. This is something unique to admire and creates a special decor for photographers. Read in this complete guide everything you need to know about the magical Bat Cave Lombok!

Where is bat cave Lombok?

The underground cave system is connected to each other. So there is not only one, but a whopping three bat caves in Kuta Lombok! They are all located in the same area along the main road. The first cave is called Goa Bangkang Prabu, the second is Goa Puwun and the third is Goa Sumur (also known as Mystical Neverland). No matter which one you choose, you will get to see (and smell…) thousands of bats.

The cave we recommend to visit is next to a new resort on the main road with a huge statue of a bat in the pool. Later in this post I will explain why this is the best Lombok cave to visit.

How to get to Goa Bangkang Prabu

From the centre of Kuta Lombok, it’s only a 10-minute scooter ride up the hill to reach the Kuta Lombok Bat Cave. The easiest way to find the exact location is to enter “Goa Bangkang Prabu” in Google Maps. Follow the directions and keep an eye out for a small wooden sign on the left side of the road. This is the entrance of the smaller cave which is in our opinion the better photo location. The other cave is just a few meters further up the road with a red sign with “Gua Sumur” on it.

This is the entrance to the first cave. Look out for this small wooden sign with ‘Bat Cave’ on it 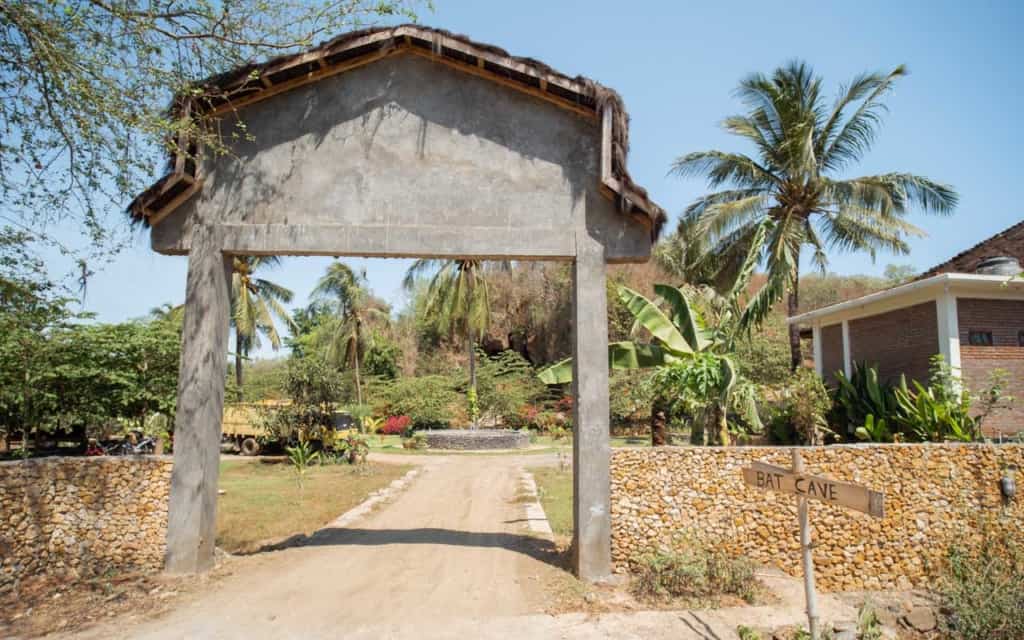 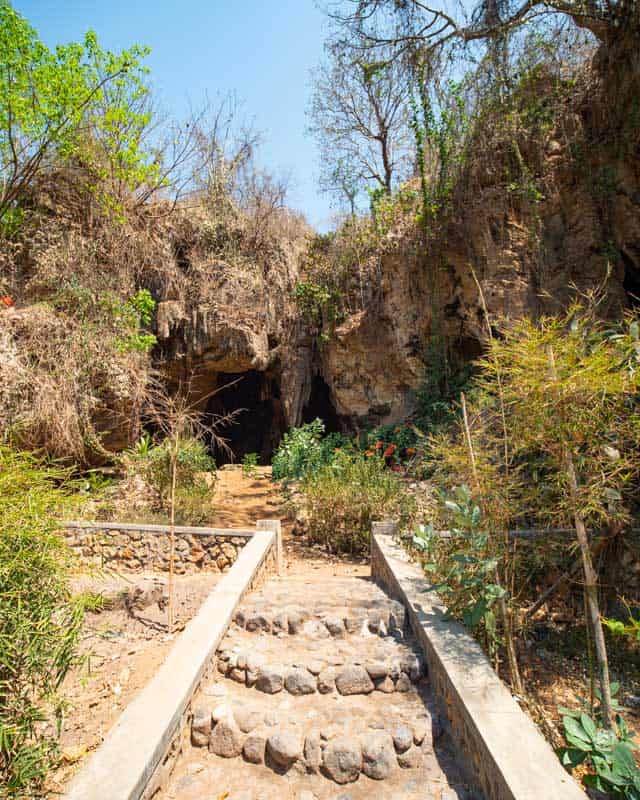 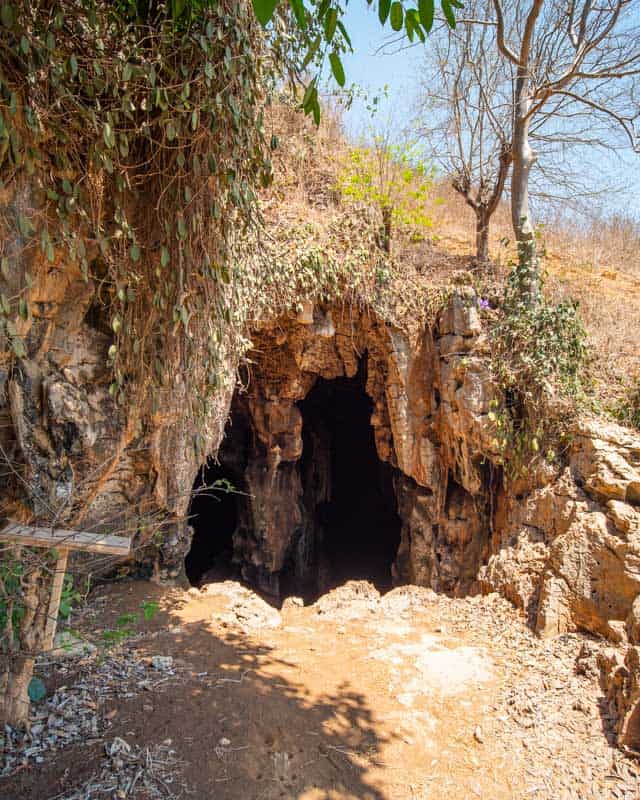 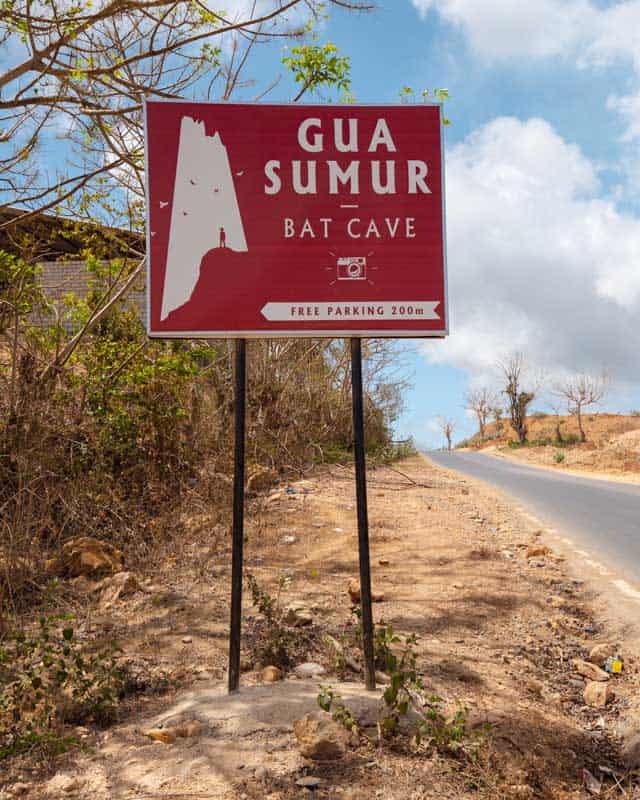 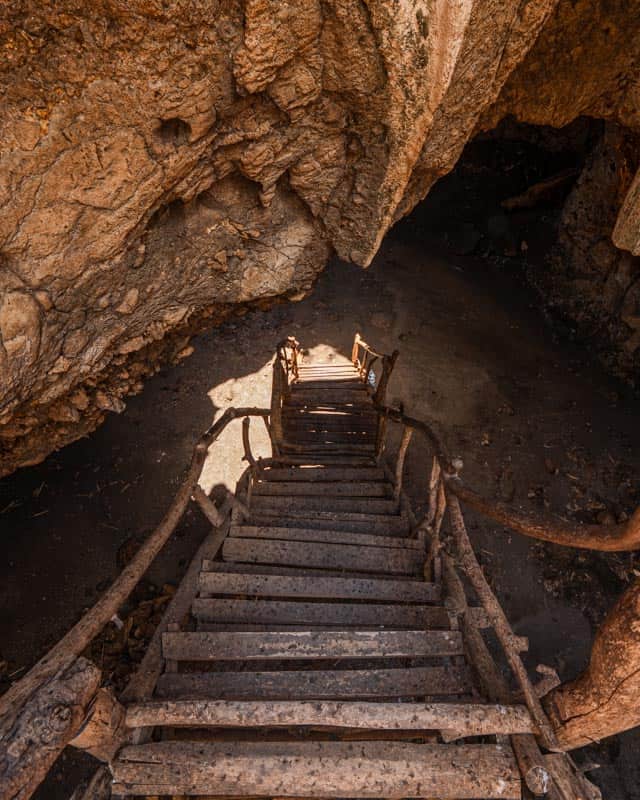 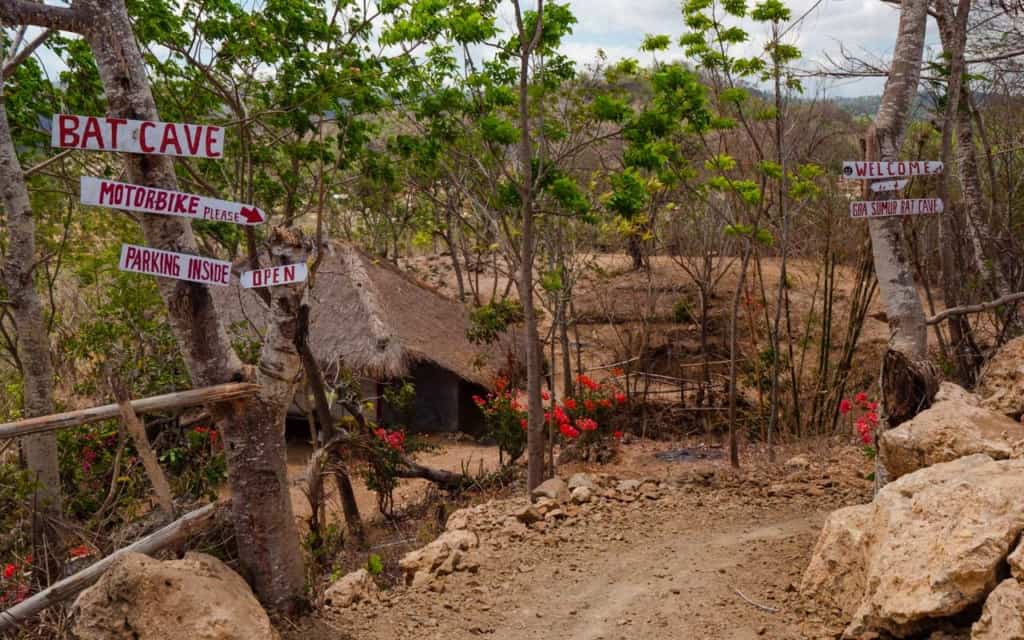 The different caves have different entrance fees. The main cave system (also known as Mystical Neverland) costs 60 000 Rupiah per person to visit including a “guide”. You can try to negotiate a bit, especially when you’re with a larger group. But the smaller Bangkang Cave we’d visited only costs 25 000 IDR per person and also includes a local guide. 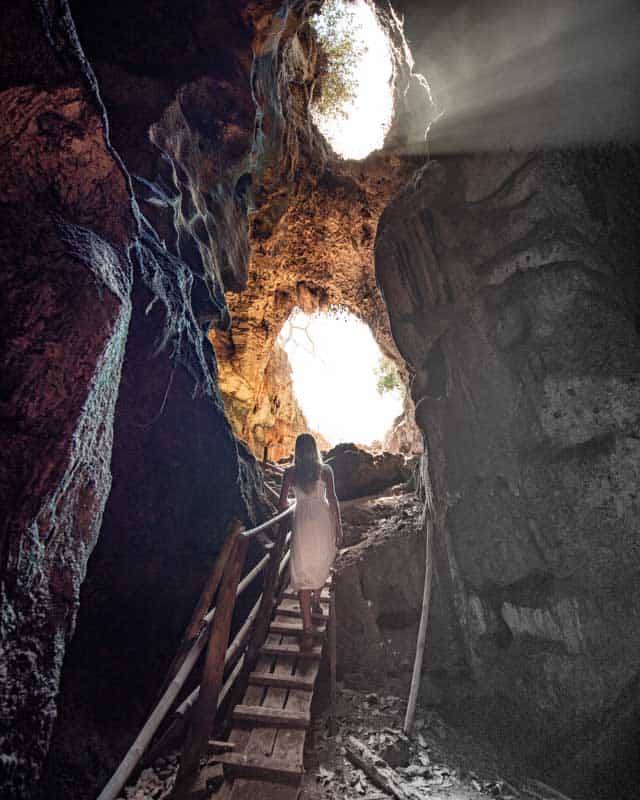 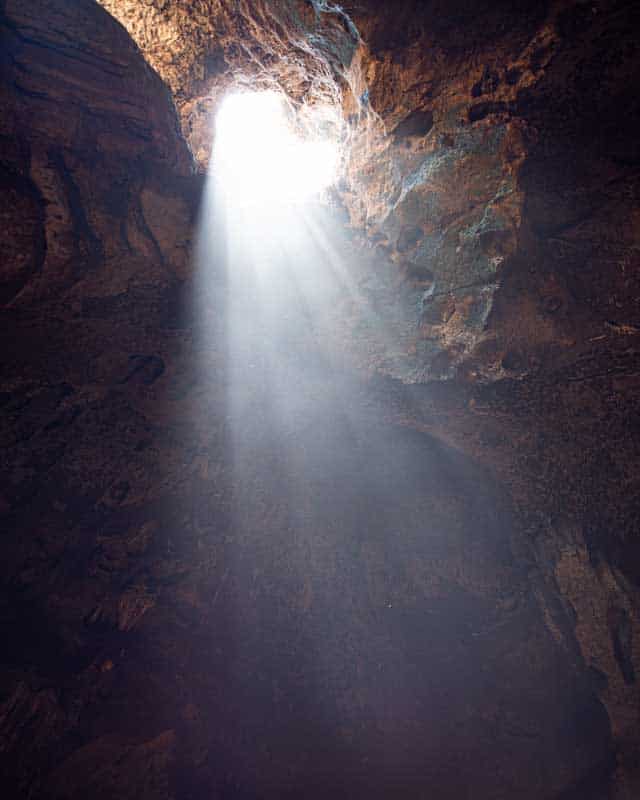 If you want to capture the light rays inside the cave, you have to get there when the sun is at its highest in the sky. That’s usually between 12 PM – 1 PM, and when we arrived it was somewhere 12.30 PM. It was a bright sky so there was enough sunshine to create the magical light rays.

We figured which position and angle were the best and starting shooting. This is the end result. 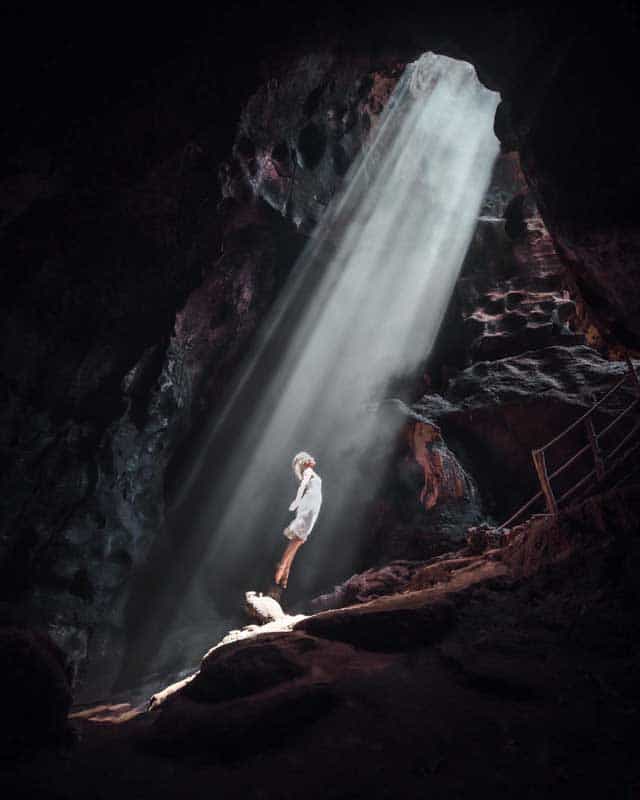 What to expect at the bat cave Lombok

Depending on the cave you choose to go, you can expect it to be very humid and smelly, so be prepared! At both caves there is a bamboo ladder leading you down into the cave. There you will see the impressive underground cave and you can hear and smell the bats.

When the sun is at its peak, the guide will burn old twigs and coconuts to enhance the intensity of the light rays with the smoke. This makes the light rays appear even stronger which is perfect if you want to take a special photo.

The humidity inside the cave is insane though. The thick clouds of smoke in the air make it hard to breathe and see. It’s definitely not a spot to spend hours at, although for the short time in the cave, it’s definitely worth the struggle!

The biggest difference between the two Lombok caves we’ve been to, was the size of the cave and potential perfect photo spot. We found the smaller bat cave with the wooden sign a much better place to take the pictures we had in mind than in Gua Sumur.

These are the pictures we shot at “Gua Sumur”.
It did not exactly turned out the way we wanted. But at the other bat cave it did! 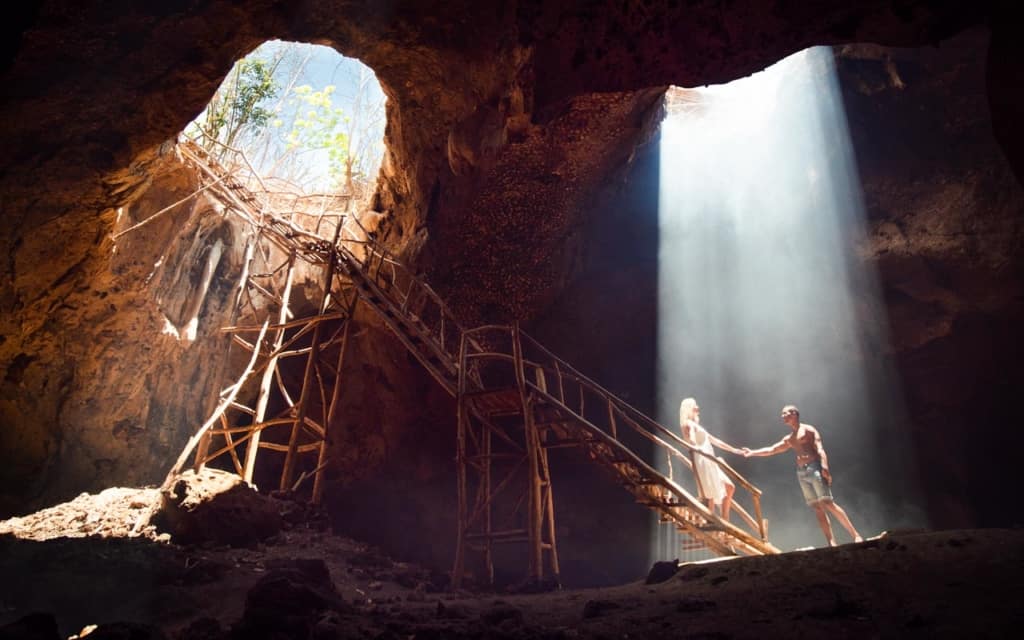 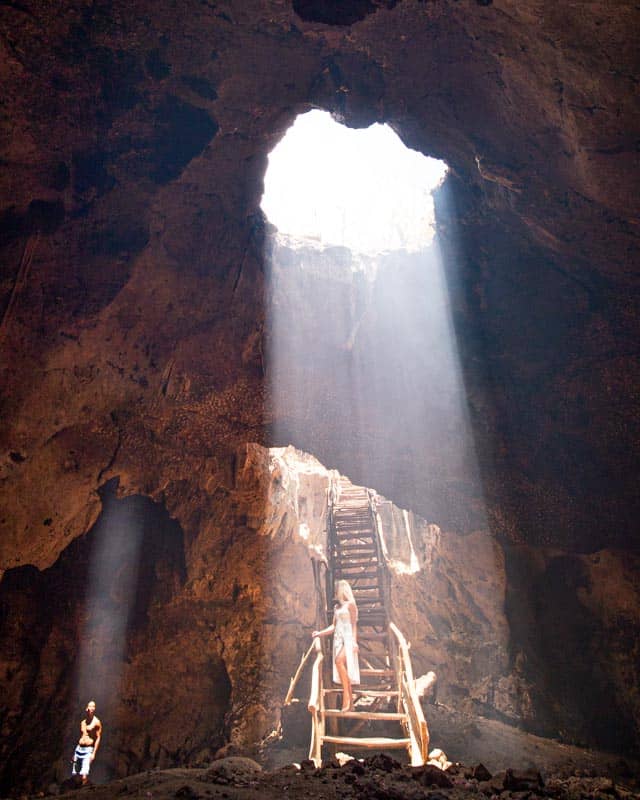 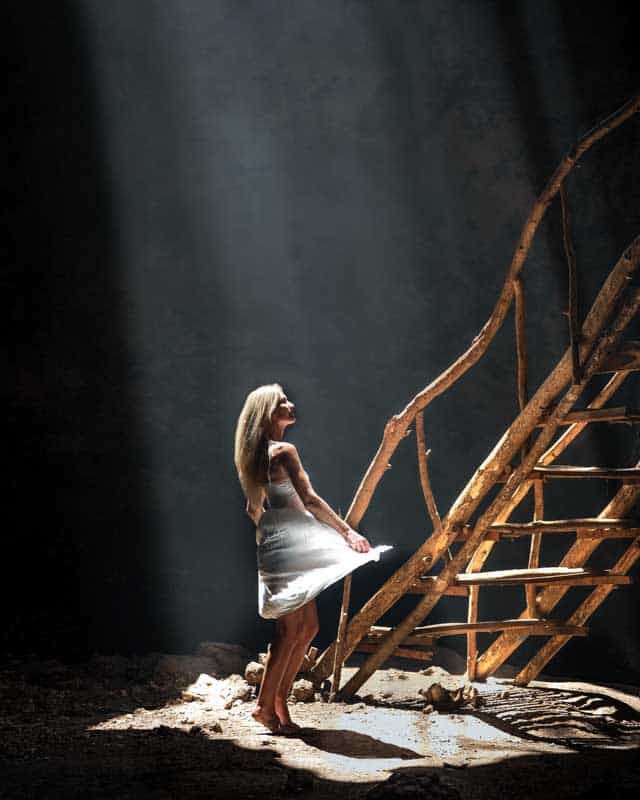 We shot this picture in the smaller bat cave and were very happy with the result! 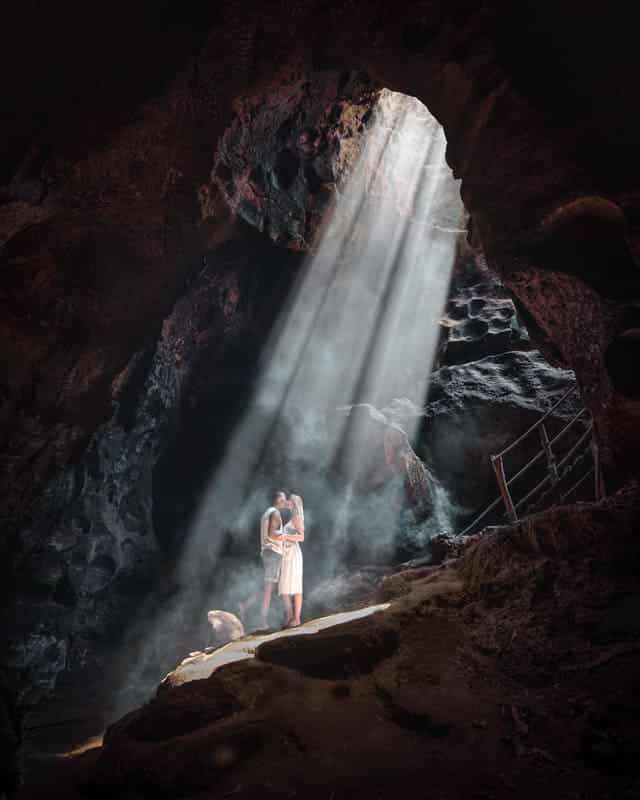 Watch the bats flying out during sunset

If you like to see another natural phenomenon, you should get to the bat caves Lombok before sunset. From around 5.30 PM until after the sunset, you can see bats flying out from the cave for their hunt which gives spectacular views! 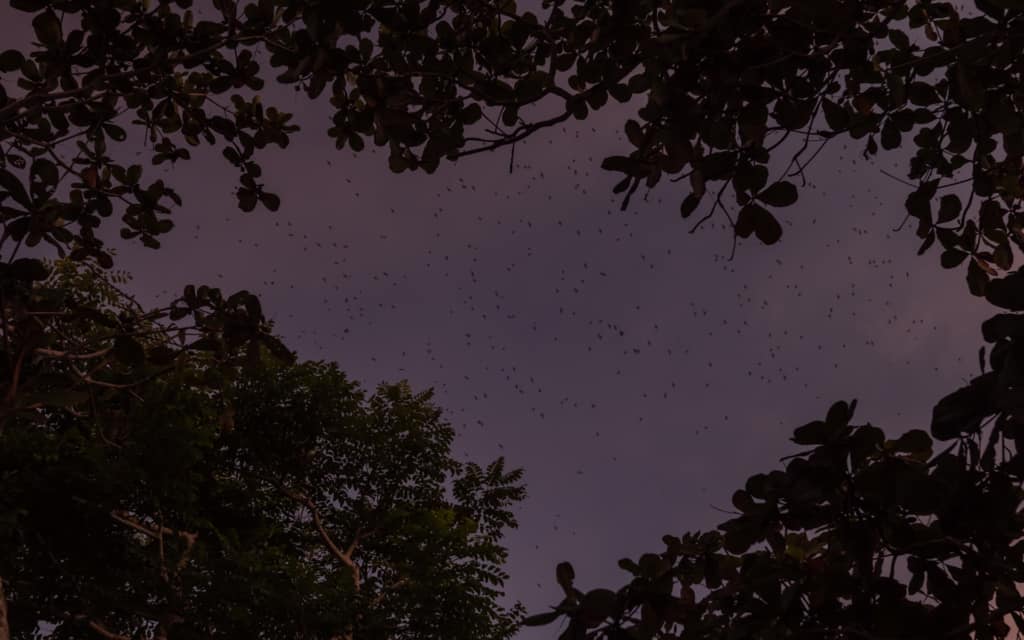 We hope you enjoyed this blog post about the bat caves in Lombok. If you have any questions, let us know!

For more inspiration about Lombok, read these guides:

Best 15 things to do in Lombok – The Ultimate Guide

12 best waterfalls in Lombok to visit

Best things to do in Kuta Lombok – The Ultimate Guide