The Ravana Falls are located in the misty mountains of Ella, Sri Lanka along the road. The water gushes down a height of 25 meters fallen from an oval concave rock. Ravana Falls is a 3-tier cascading waterfall, creating rock pools along its way down. During the wet season Ravana Falls takes the form of a drooping areca flower, but its wide size is reduced dramatically during the dry season. Although it is always worth it to check this waterfall when you’re Ella! So here is all the information you need before you go to Ravana Falls Ella.

How to get to Ravana Falls Sri Lanka

Via a winding road down through the stunning green valley of Ella you will arrive at the Ravana Falls in only 10 minutes. There are several options to get to the Falls. The cheapest option is to take the local bus from the Ella bus stop which goes to Wallawaya and will cost you 50 rupees. Another option is to go with a TukTuk for 300-500 rupees depending the amount of people. But in our opinion the best option which gives you the most freedom is to go with a rental motorbike. This will give you the opportunity to visit the Diyaluma Falls as well which are another 45 min drive further than the Ravana Falls. 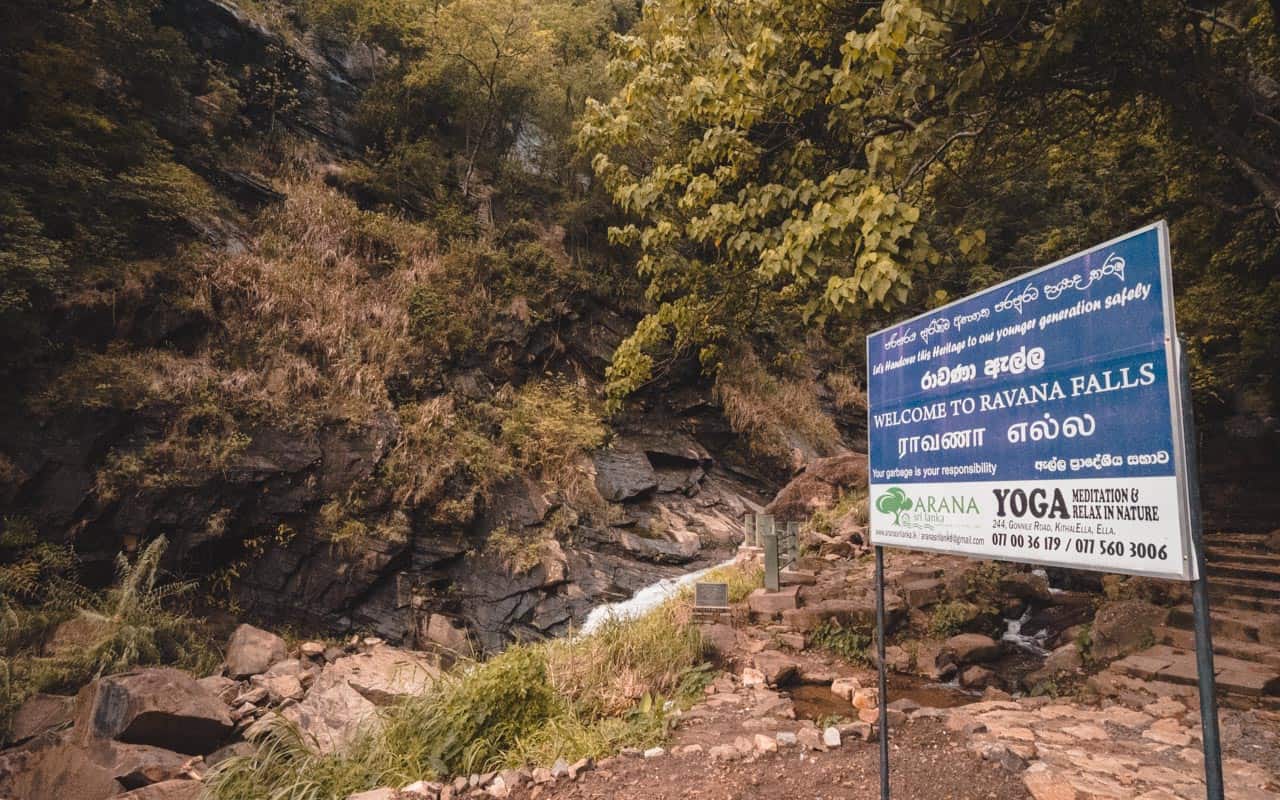 If you want to beat the crowds, the best time to go to the Ravana Falls is during the early morning. Because the waterfall is located right next to the road, there are a lot of people stopping to take a quick picture. In terms of the best season to go, the wet season will result in a more powerful and impressive waterfall. Although, it is always worth to visit a waterfall which you don’t even have to hike to! 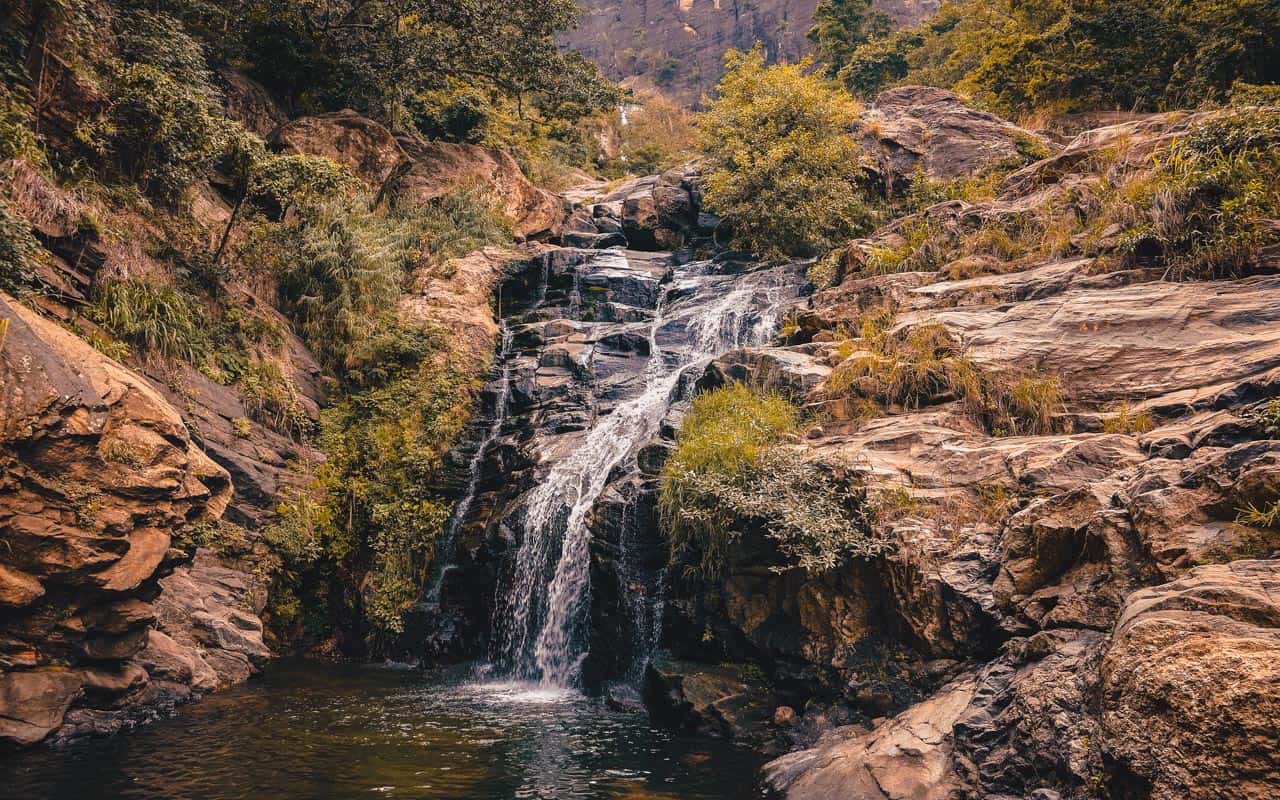 History of the Ravana Falls

The Ravana falls have been named after the Sri Lankan king Ravana who lived over 5000 years ago. According to legend, it is said that Ravana had kidnapped princess Sita, and had hidden her in the Ravana Cave behind this waterfall At that time, the cave was surrounded with thick forest in the middle of the wilderness. The waterfall was used for her bathing purposes and is therefore an  Excavations in the cave have even revealed evidence of human habitation dating back to over 25,000 years ago.

What to expect at Ravana Falls Sri Lanka

With the height of 25 meter and tucked away in the beautiful valley of Ella, this picturesque waterfall is absolutely worth a visit. Although you can’t do that much at the waterfall itself, it’s a nice stop on your way to the Diyaluma Falls for example. There are some local shacks at the parking lot, and you can make some nice pictures from the platform with the waterfall behind you. Another thing to do in the near area is exploring the Ravana Cave. 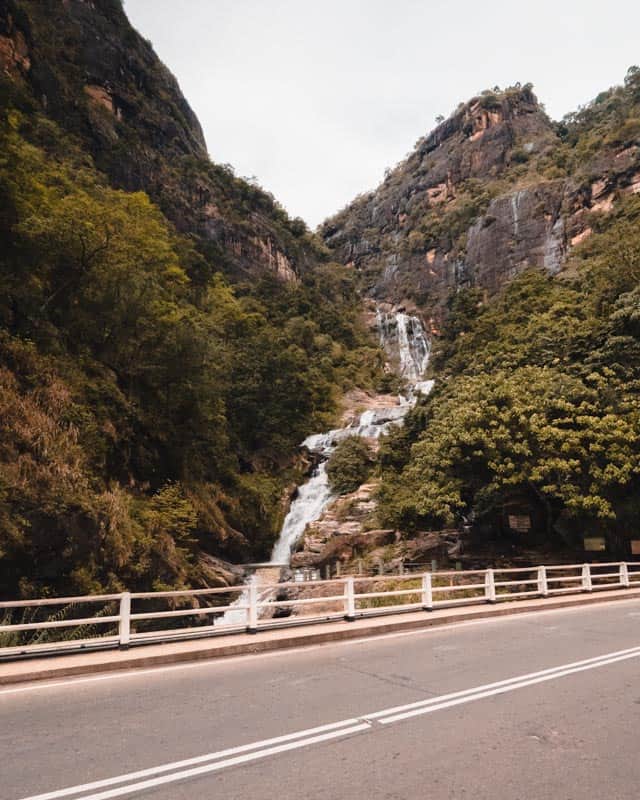 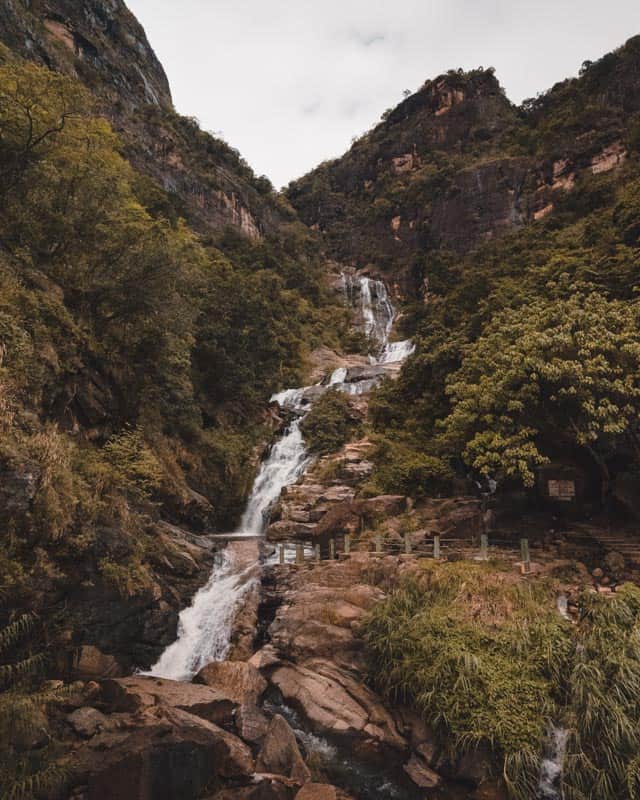 What NOT to do at the Ravana Falls Sri Lanka

You maybe read somewhere that it’s possible to climb to the top of the waterfall. Well, I can assure you, don’t try this as there are very clear signs at the beginning of the waterfall which says: “No climbing” and “Don’t climb the rocks”. There is also police checking, and we’ve heard stories of tourists who ignored the signs, climbed up the waterfall, but then got chased by the police with large stick. They were forced to go down and pay a fine. It’s the same with flying a drone. We tried it at this place, but it wasn’t allowed. The police officer came to us to say it in a friendly way which we of course respected.

Ella has an average temperature comparing to Colombo where it is very warm most of the time, and Nuwara Eliya where it can become very cold. Towards the end of the year, it will get colder in Ella. Especially in December when the temperatures will drop to around 10 degrees. There is also more change of rain in Ella than the South coast. On average, October is the wettest month in Ella and March is the driest month. But rain can fall anytime, so be prepared! That’s also the reason why it’s so beautifully green in the valley of Ella.