If you think the beautiful paradise island Koh Phangan is only about Full Moon parties and drunk backpackers, then think again. The best part about being in a tropical paradise is being blessed with an abundance of natural wonders. Thanks to the hilly and diverse landscapes of Koh Phangan, there are numerous waterfalls scattered across the island. But if you want to see the waterfalls in their full glory, you have to visit Koh Phangan in the right season. Otherwise there won’t be any water and the falls can be quiet underwhelming with no water running down. In this blog post you will find all the best waterfalls on Koh Phangan, what the best period is to see them and many other tips!

Phaeng waterfall Koh Phangan is the biggest and most beautiful waterfall on the island in a jungle area with a steep hiking path and a popular lookout point. But don’t be disappointed when you visit the waterfall in dry season, because there won’t be any water running down!!

How to get to Phaeng waterfall

Phaeng waterfall is located in the middle of the island with a decent road going straight to the parking area of the waterfall. It’s only a five minute drive from one of the other Koh Phangan waterfalls, Paradise waterfall. All the local attractions are pretty well signposted on Koh Phangan, so if you’re travelling with your rental scooter just type the below address into Google Maps and it’ll be easy to find! 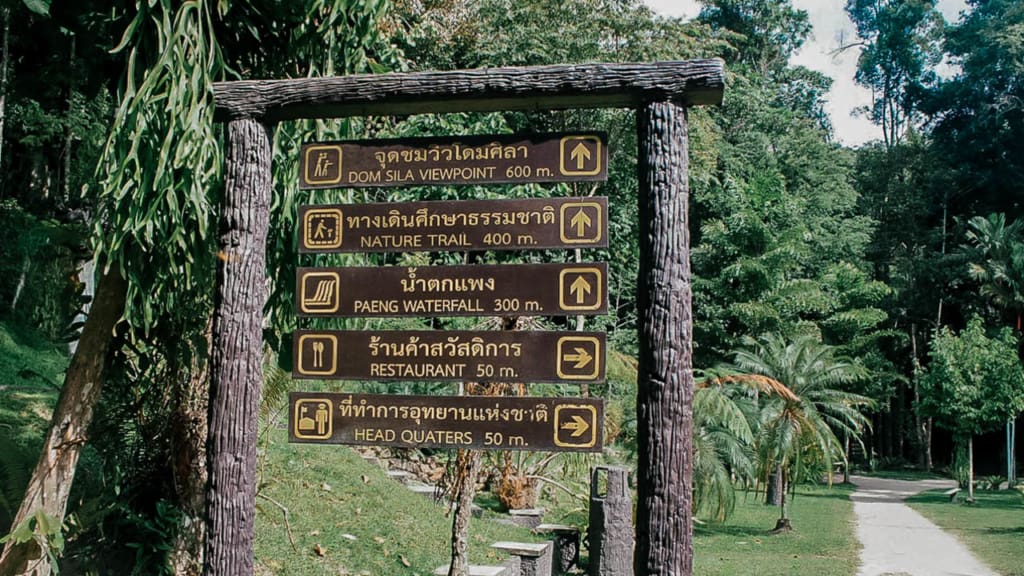 What to expect at Phaeng waterfall

Phaeng waterfall is part of the Than Sadet National Park and is made up of two separate falls. Phaeng Waterfall (also known as Phaeng Noi Waterfall) and Khan Ban Dai Waterfall. You will first pass Phaeng Waterfall when entering the park near to the entrance. This is the most famous waterfall and the star attraction of the park. In the right season, it is really worth it to visit Phaeng waterfall. But in the dry months the water flow decreases significantly which can feel a bit underwhelming. There is even a chance there is no water running down.

The second waterfall, Khan Ban Dai Waterfall, is around 500 metres up in the jungle and is a nice little stream which trickles all the way down. If you enjoy hiking we recommend climbing to the top.

Read everything about Phaeng waterfall in our complete guide 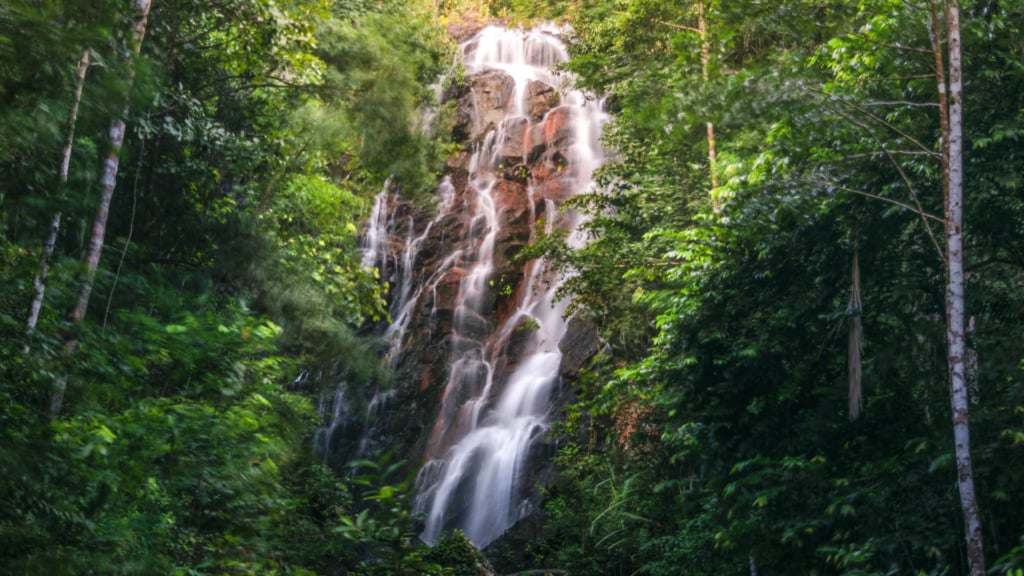 Than Sadet waterfall is one of the most scenic waterfalls of Koh Phangan, made up of huge granite boulders and some freshwater pools where you can take a dip. It is a cascading fall, similar to Wang Sai, and is in total about three kilometres long.

How to get to Than Sadet waterfall

Than Sadet waterfall is located on the eastern side of the island. You can easily find it if you type in it’s name. The entrance is located at the side of the road, where you will also see a shop. You don’t have to pay parking or entrance fee. But the old man at the shop appreciates it if you buy something to drink at his place 🙂 From the parking area it is only around 100 meters walk until you reach Than Sadet waterfall.

What to expect at Than Sadet waterfall

Than Sadet waterfall is made up of huge granite boulders and some freshwater pools where you can take a dip in. The three kilometre long cascading fall actually consists of 3 waterfalls: Thong Nang, Sampon and Daeng waterfalls which are together being called the Than Sadet waterfall. It has the advantage of having water all the year long even at the peak of the dry season. Of course the stream is less spectacular in the dry season, but it is still worth a visit then instead of the other Koh Phangan waterfalls where no water will be running at all.

This waterfall is not only visited because of its refreshing waters, but more importantly for an inscription that was left on a rock by King Rama V in 1988. Thai King Bhumibol has also visited the Than Sadet waterfall if we may believe the rumours. If you want to see the inscription of King Rama V, you have to walk further down the stream of Than Sadet.

Read everything about Than Sadet waterfall in our complete guide 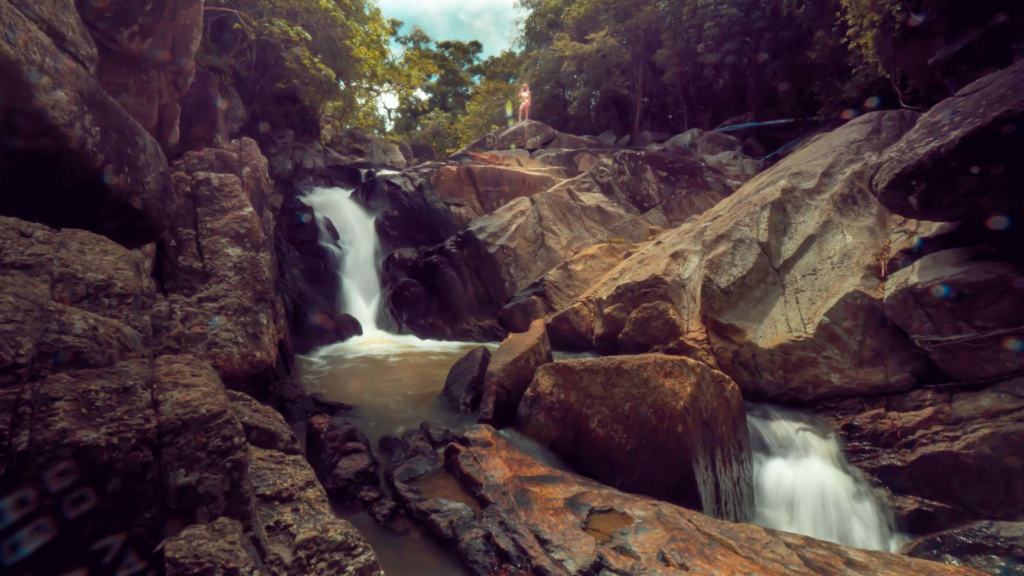 This waterfall is mainly famous because of the “Waterfalls party” that being held at this place. The two pools with crystal clear water are beautiful, and unlike the other Koh Phangan waterfalls, you can even visit this one in the night!

How to get to Sramanora waterfall

Sramanora waterfall is located on the Southern part of the island and easily accessible by walking north from Baan Tai on the small road opposite of Yam’s Kitchen. But you can also go by scooter and, because from the car park to the falls it’s only a five hundred metre walk which goes through the jungle and is beautiful on its own!

What to expect at Sramanora waterfall

There are two pools at Sramanora waterfall, a big one to your right and a smaller, more secluded one that you can find once you cross the river and climb the hill. This one even has a restaurant for the hungry people and provides great views of the valley.You can visit Sramonara Falls during the day, but unlike most other waterfalls, you can also visit the falls in the night. The crystal clear water glistening under the moonlight is a truly breathtaking sight and romantic too. Upon entering, you’ll immediately see a big pool to your right, encircled by huge rocks that seem to be balancing itself.

Paradise waterfall is a fun place to play for some time with ropes hanging from tree branches so you can swing onto the pool under the waterfall. But only in the right season when there is water running down the stream. In dry season the flow dries up which results in no water, so also no waterfall.

How to get to Paradise waterfall

Located on the northern part of the island in Chaloklum village, this waterfall is easy to find. After you passed the restaurant, you will spot the waterfall and swing ropes immediately.

What to expect at Paradise waterfall

Once you parked your scooter and passed the restaurant, you’ll find a pool with ropes hanging from tree branches. It’s so much fun to ‘monkey around’ and swing on them to launch yourself into the pool! But make sure there is enough water so you won’t hit the ground! If you want to explore another waterfall in the area, and you’re in the right season, you can trek for another 40 minutes in the jungle which will bring you to the main waterfall which is a beauty! Especially in January and February when there is enough water running down. This is an impressive cascade as well with a plunge pool attached to it. 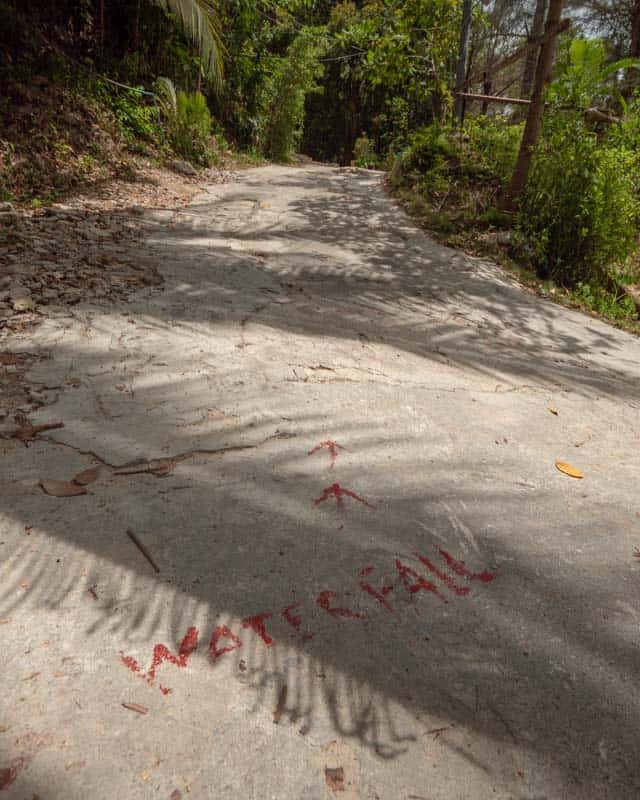 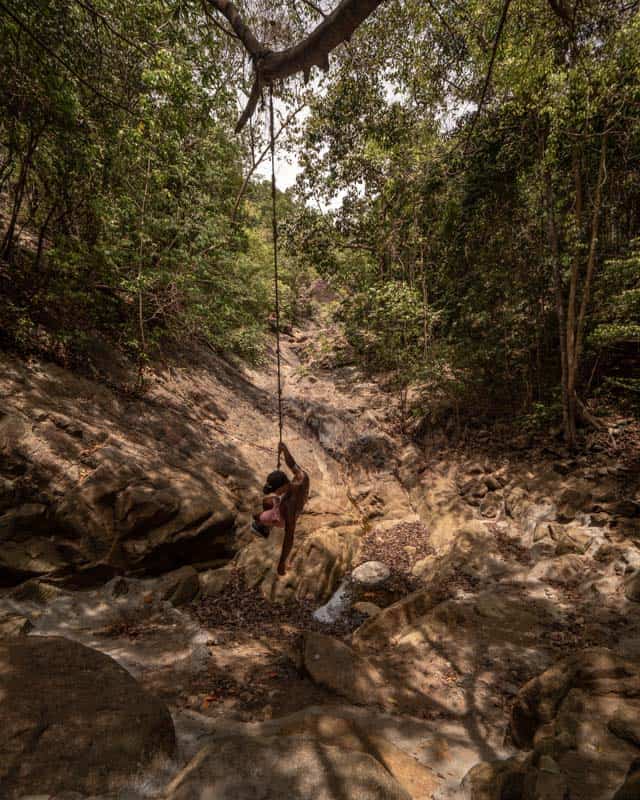 The sign to Paradise waterfall is written on the road. If you’re going in dry season, just like us, there won’t be any water running down or a pool to plunge in.. That was still not a reason for Atiba to not make use of the rope swing 😉

Wang Sai waterfall is a cascading waterfall with different levels. Some of these levels contain plunge pools where you can cool off and go for a swim. The largest one is at the bottom of the waterfall. What makes Wang Sai waterfall stand out from the rest of the Koh Phangan waterfalls is the dazzling crystal blue water at some of the cascades. This occurs because of the limestone sedimentation under the clear water. 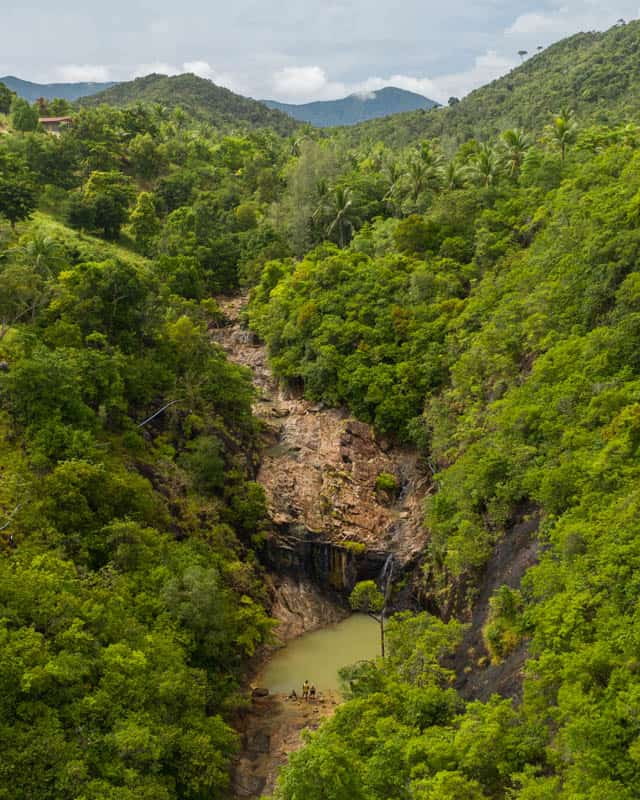 How to get to Wang Sai waterfall

Wang Sai waterfall is located on the northern part of the island and can be reached from the same parking area as where you get to Mae Haad beach & Koh Ma island. The waterfall is easy to access and is just a 15 minute walk from the parking area with signposts to guide your way to the falls. The entrance is free and the opening times are from 9.30 AM until 6 PM.

What to expect at Wang Sai waterfall

The cascading Wang Sai waterfall is a stream of water that makes its way down some levels. Some of these levels contain plunge pools where you can cool off and go for a swim, the largest one being at the bottom of the falls. What makes Wang Sai stand out from the other falls is the dazzling blue colour of the water at some of the cascades, which occurs thanks to the limestone sedimentation under the clear water. For this waterfall also applies that during dry season there won’t be any water running down, which makes it not really worth it to visit. 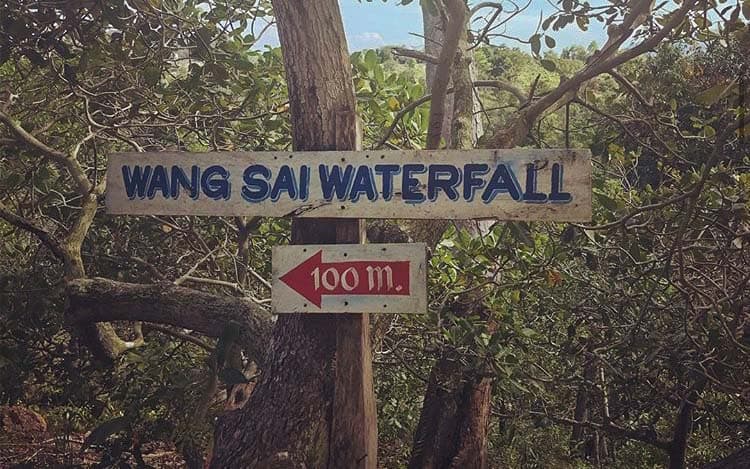 Than Prawet waterfall is a smaller waterfall stream located on the north east side of Koh Phangan. It’s hikers paradise because it’s not that easy to get to. More an adventurers destination for people who want to go more off the beaten path. It’s worth it to visit this waterfall, especially in rainy season and if you want to be on a more secluded place.

How to get to Than Prawet waterfall

You can reach Than Prawet waterfall from Thong Nai Pan Noi beach or from the main road above the bay. It’s not super easy access and you have to go a bit off road, so make sure you are comfortable driving your scooter when you’re planning to go here. 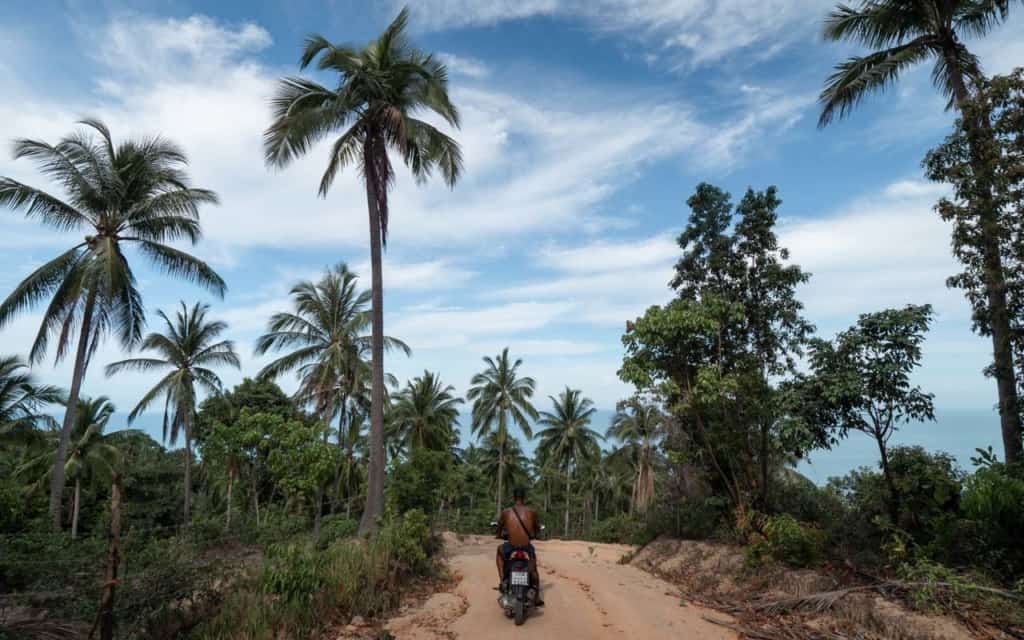 What to expect at Than Prawet waterfall 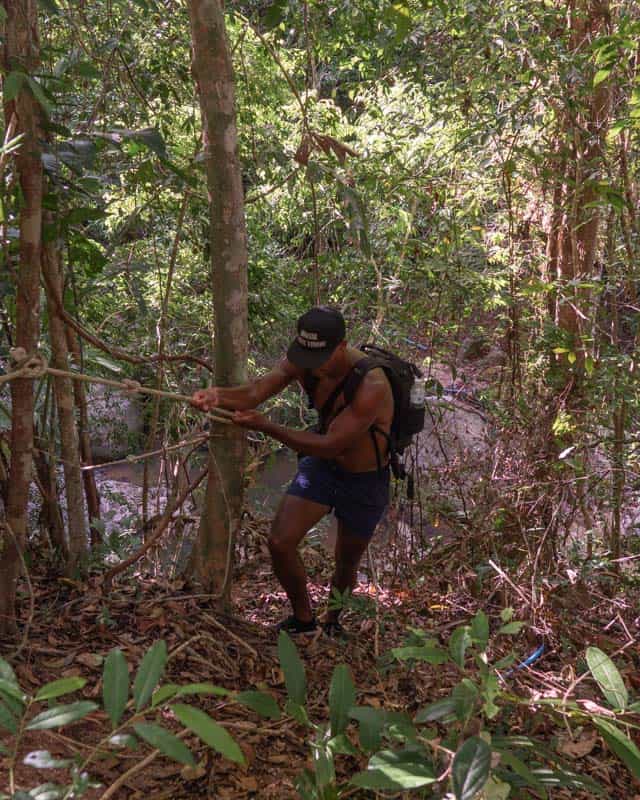 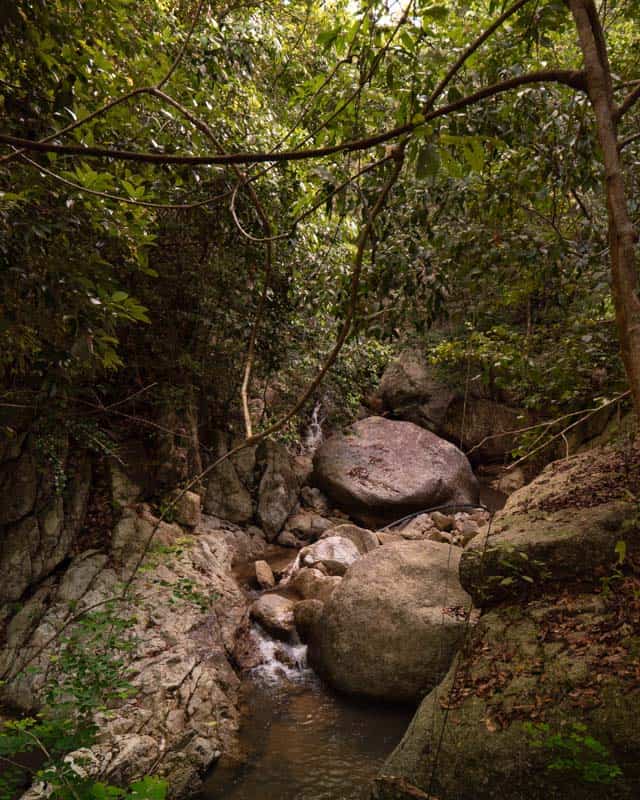 The road and hike to this waterfall is beautiful, but the fall itself wasn’t that impressive when we visited in dry season. We believe it’s much better in-after rain season

The best time to visit any of the Koh Phangan waterfalls is from July – October, in the monsoon season. But if you can’t make it in these months, monitor the weather forecasts and try to visit one of the waterfalls after a heavy rainstorm. Of course you don’t want heavy rain during your time on the island, but most waterfalls dry up when there’s no rainfall for a longer period. Or the water flow decreases significantly what makes the waterfalls not spectacular anymore.

Things to keep in mind when visiting the Koh Phangan waterfalls

For more travel tips about Koh Phangan, head over to these blog posts:

Koh Phangan best things to do – The Ultimate Guide

The best restaurants and cafes on Koh Phangan

For more travel inspiration to Koh Tao, head over to these blog posts:

Best things to do on Koh Tao – The Ultimate Guide

The best beaches on Koh Tao – The Ultimate Guide

Planning to travel to Koh Samui? Then head over to this blog post:

Best things to do in Koh Samui

The best beaches on Koh Samui