Skip to content
Home » A GUIDE TO TIGER CAVE TEMPLE KRABI (WAT THAM SUEA) – All you need to know!

A GUIDE TO TIGER CAVE TEMPLE KRABI (WAT THAM SUEA) – All you need to know! 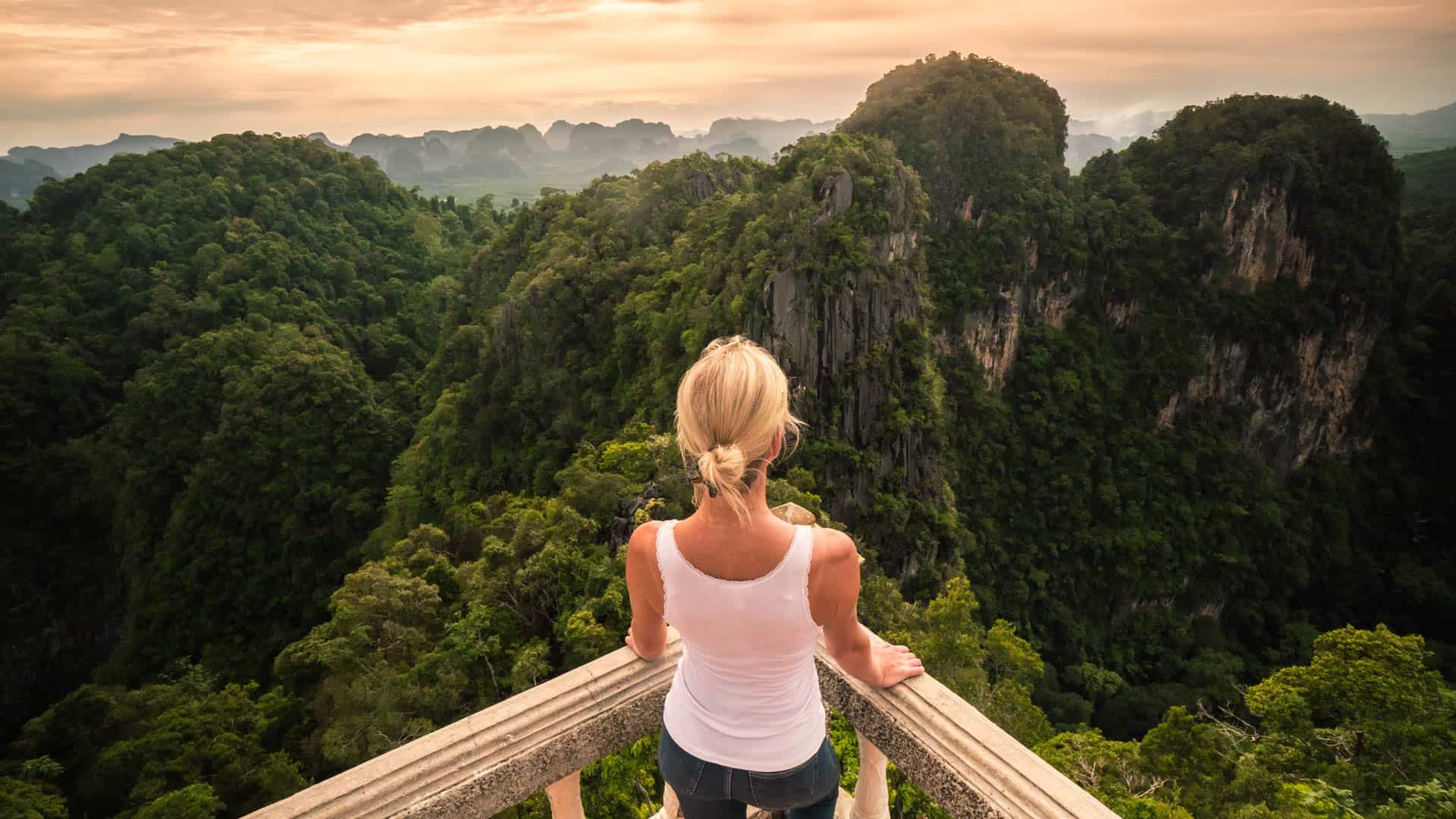 About the Tiger cave temple Krabi

The Tiger cave temple is one of the most interesting temple complexes in southern Thailand. It is a Thai-Buddhist meditation centre which holds significant archaeological and historical importance as many historical remnants were discovered here.

The surrounding area of the Tiger temple cave is stunning with mostly tropical rainforest. The huge limestone cliffs and many old trees are part of the Kiriwong Valley which you will look out on from the summit of the Tiger Cave temple. And the best part is, there is no entrance fee for the Tiger Cave Temple Krabi! 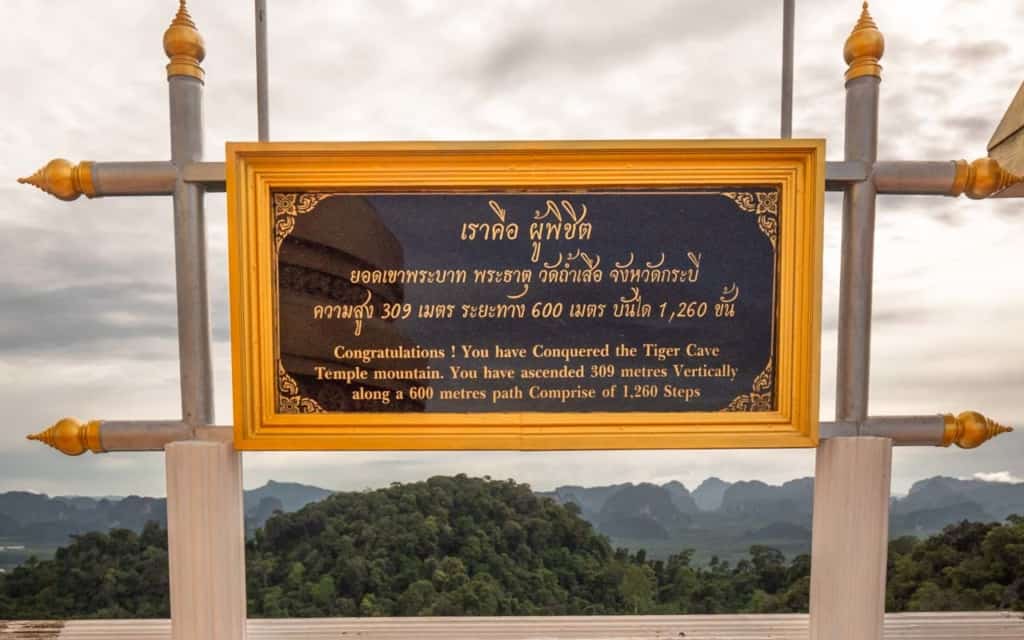 Visiting the Tiger Cave temple is some of the must things to do in Krabi. But you can easily combine a day of exploring the highlights in Krabi with one of these tours. Below some of the best tours I recommend including a visit to the Tiger Cave temple. All of these tours include air conditioned transport with hotel pick up and drop off, certified guides and sometimes also lunch and the entrance fees. You can reserve now and pay later, with cancellation up to 24 hours in advance to receive a full refund.

How to get to Tiger cave temple Krabi

The best way to get from Krabi town to Tiger cave temple is with a rental motorbike if you’re comfortable enough driving one yourself. For around 200 Baht per day you can rent a motorbike in Krabi. Otherwise you can take the Songthaew to the entrance of the Tiger Cave Temple which gives you a fun experience of the local public transport. But the Songthaew doesn’t go through the gate of the Tiger Cave complex, so you’ll need to walk a short distance to reach the ticket booth and stairs. The prices for a Songthaew can vary, but it should be about 150 baht from Ao Nang Beach or 50 baht from Krabi town one way. 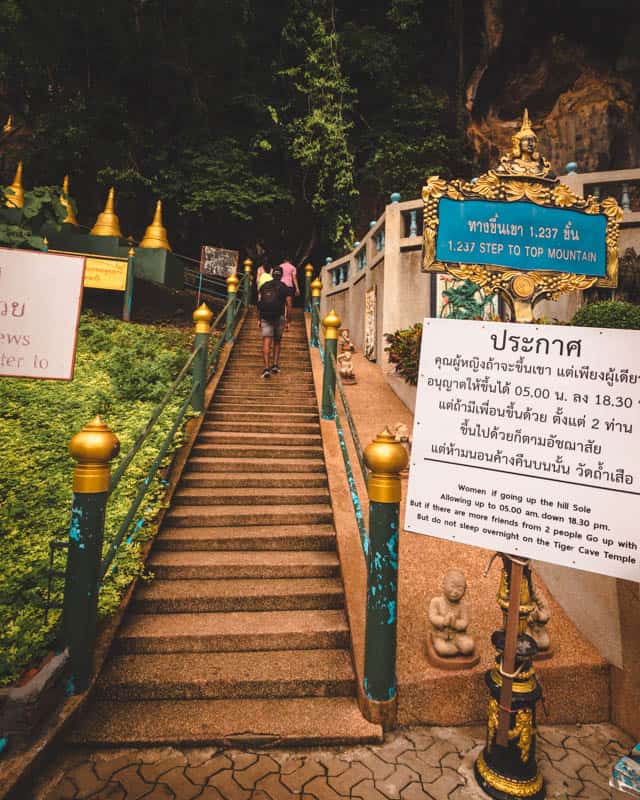 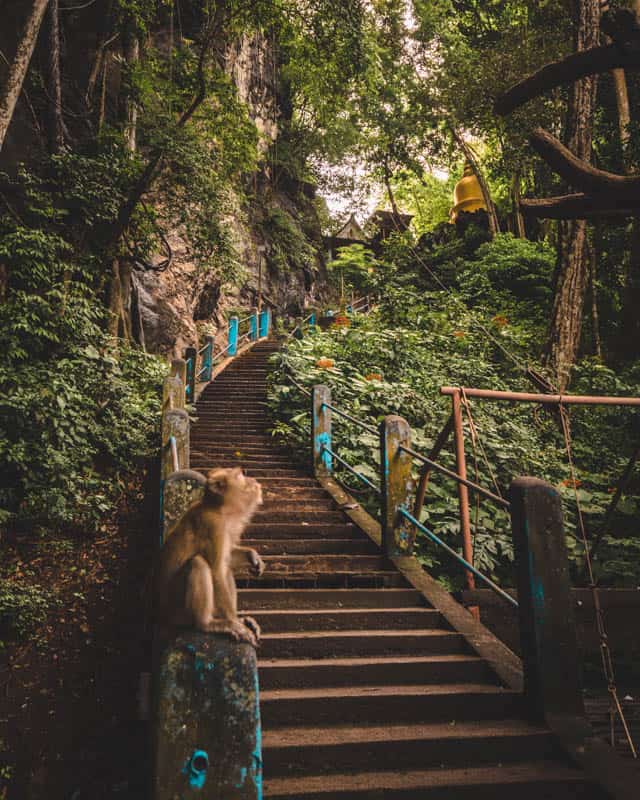 The Tiger cave temple Krabi is officially open from 8AM until 5 PM. But we didn’t left until 6 PM because we were still enjoying everything that this place has to offer. So I think that after 5 PM they don’t let people climb to the top anymore, but you’re still able to look around on the ground floor of the Tiger Cave temple complex.

The Tiger Cave is located at the bottom of the complex and as with most temples in Asia, you need to cover up your shoulders and knees to go inside. But the temple itself at the top of the mountain is an open air area with no dress code. So when you climb up the mountain, you don’t need to bring specific clothes. Just make sure to wear something comfortable for the hike. 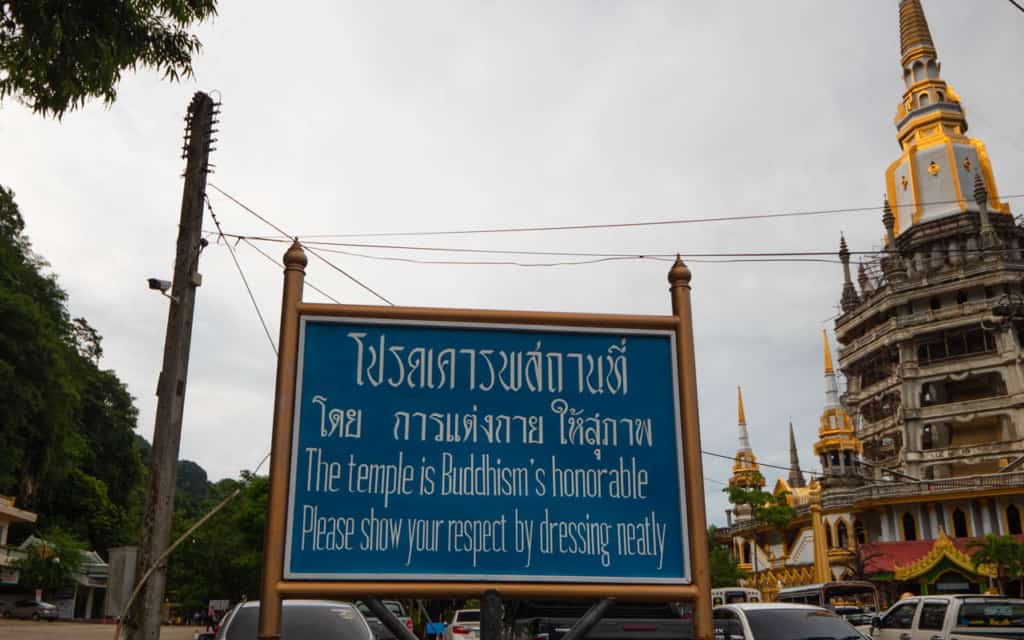 The best time to visit, and especially to hike to the summit of the Tiger Cave Temple, is early morning and late afternoon. During this time of the day the sun is not too hot, and when you go before sunset, you can watch the sky above Krabi turning into yellow, orange and pink. Avoid this  climb during midday, it will be too hot and the climb is already so exhausting.

What to expect during the Tiger cave temple hike

So after all this general information it’s time for the climb up the Tiger Cave temple mountain! The height of the Tiger Cave Temple mountain is 309 meters with 1260 steps to conquer until you reach the summit. (There used to be 1237 steps, but some stairs have been renovated and renewed, making it 1260 steps nowadays).  Depending on your fitness level, you can reach the top in 20 – 30 minutes. The record time to reach the top is 10 minutes, so if you feel challenged, good luck!! It’s an incredible work out for your legs, you will feel the burn days after! 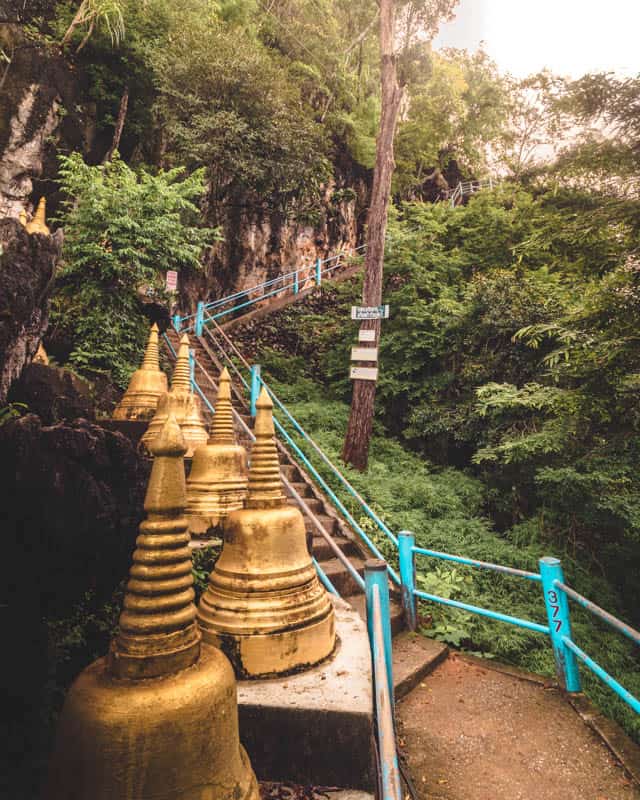 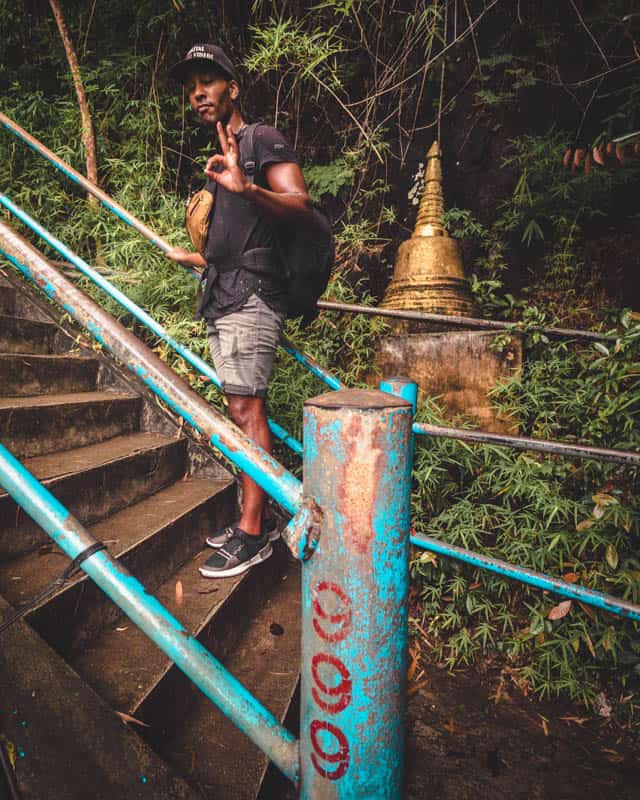 Also keep an eye out for the cheeky monkeys. They like stuff that’s easy to grab. So watch your sunglasses, phone and other valuable goods. Just put all your loose belongings in your bag to be sure you won’t loose anything. These monkeys are very used to people so they won’t harm you. But the best advice when you pass monkeys is to NOT search for eye contact and just ignore them, especially when they want to intimidate you. Haha, those funny little monsters. 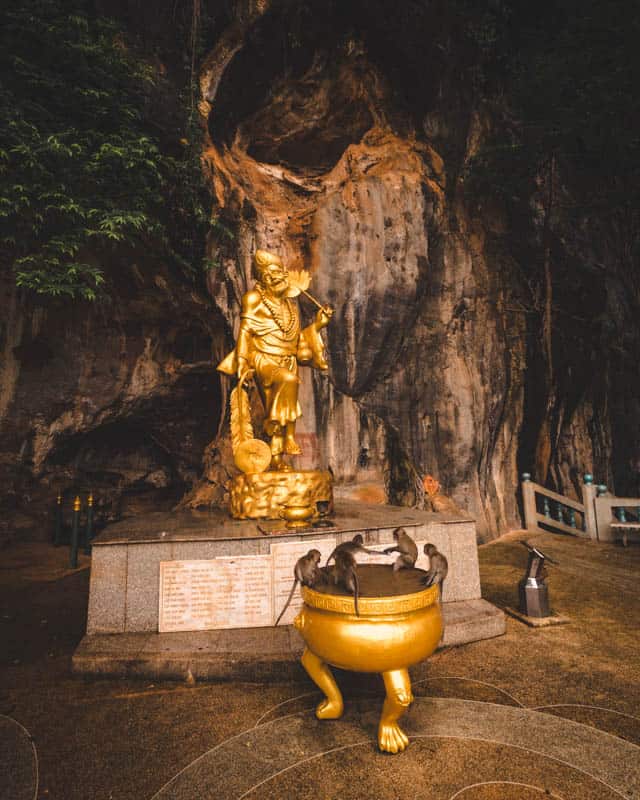 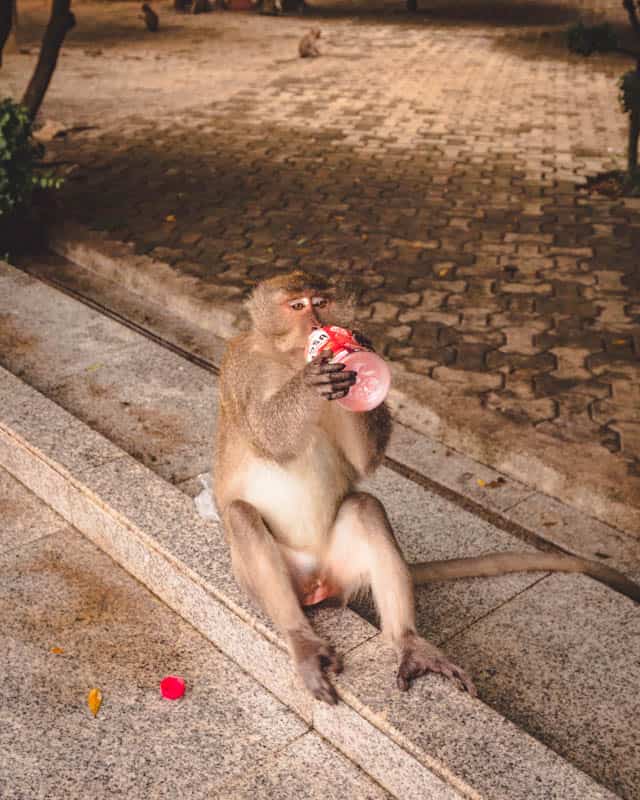 Even if you are in good shape, this hike will challenge you. The heat, humidity and uneven stairs make it difficult. But once you make it to the top, you are rewarded with a stunning 360 degree view of most of the province of Krabi and the Andaman Sea. 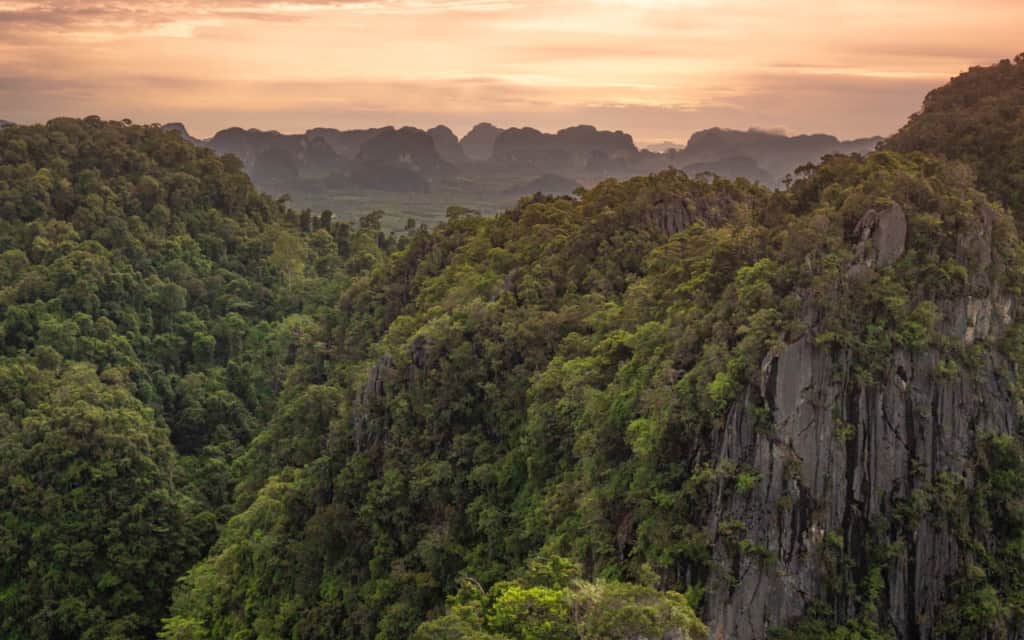 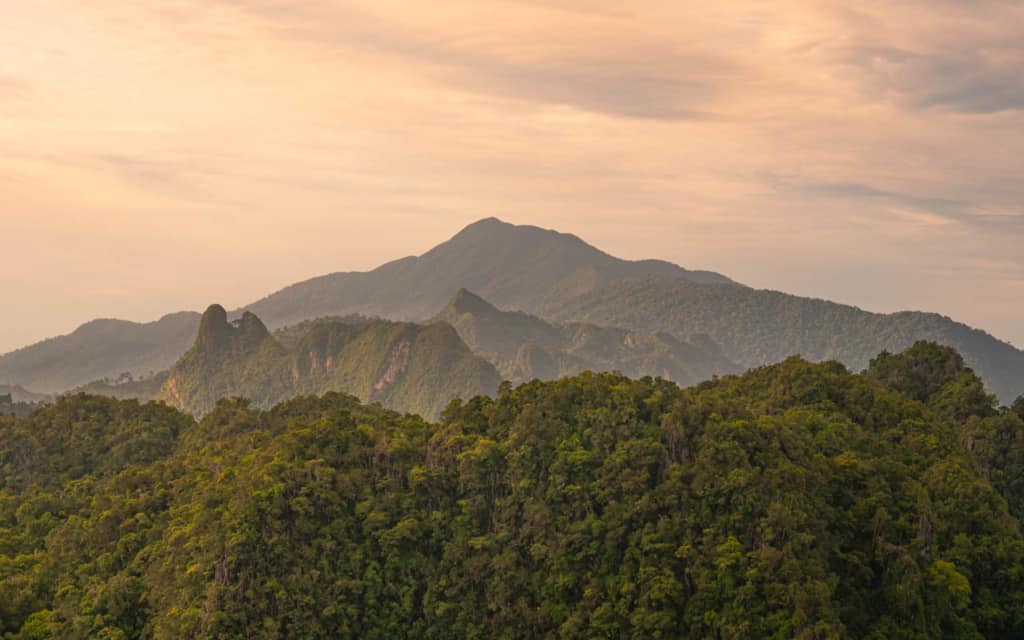 What to expect at the summit of the Tiger cave temple

Arrived at the summit of the Tiger Cave temple mountain, you will see the amazing view of Krabi, the Andaman Sea and the islands. The direct surrounding area is covered in lush jungle with large trees which are hundreds of years old, particularly in the Khiriwong Valley.

On top of the summit sits a beautiful Golden buddha statue which is very impressive to see. The silence on top of the mountain in combination with the incredible view brings you back to an almost meditative state after the hard effort. There are also several other statues, another small temple and beautiful details of the statues to admire. 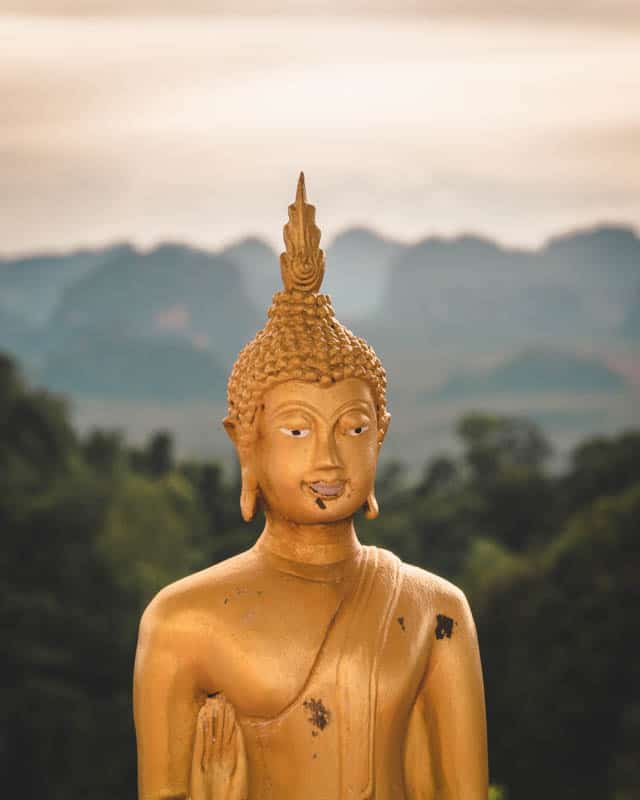 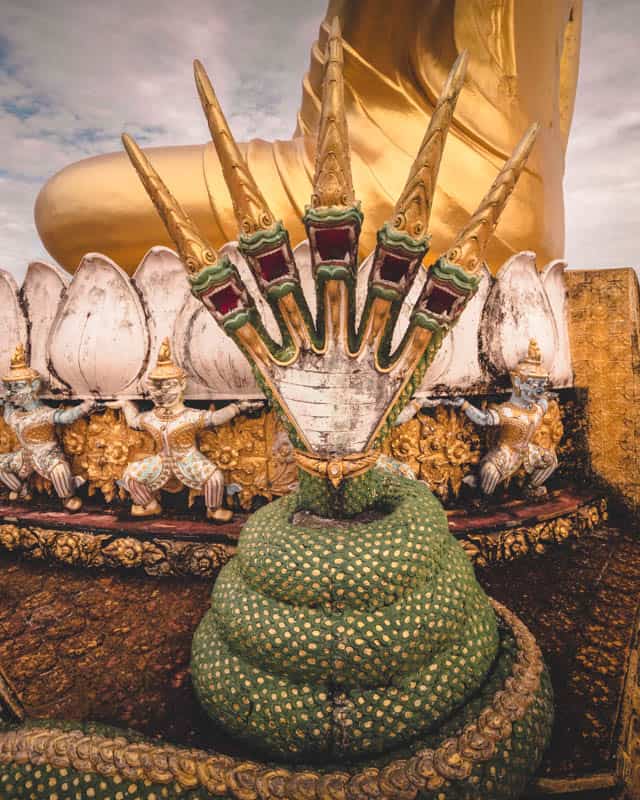 If you’ve decided to make your way up to the summit in the afternoon, you should definitely stay to watch an incredible Tiger cave temple sunset. We’ve been waiting until the sun was set before we made our way down and it was a wonderful experience! 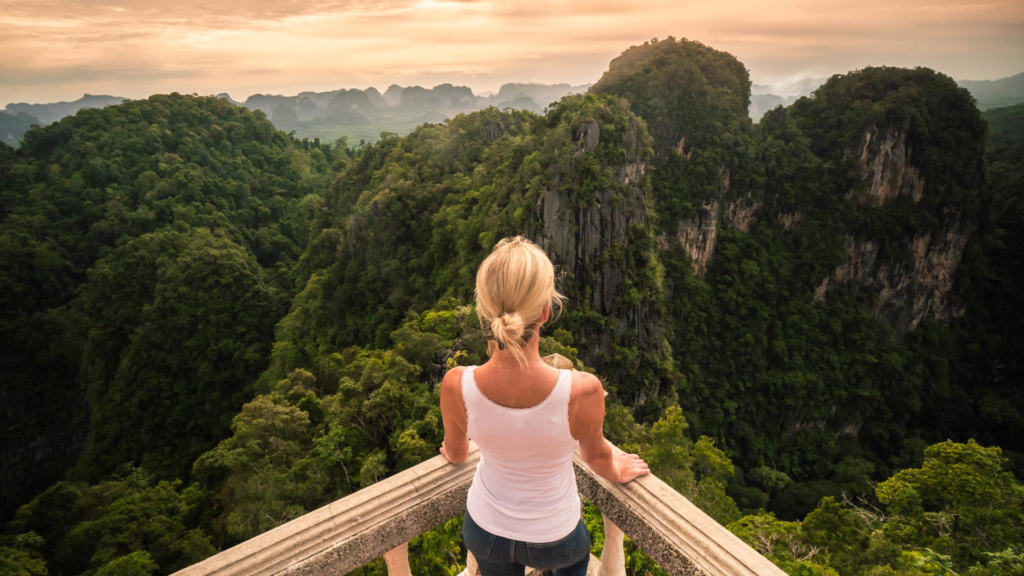 The hike isn’t the only thing you can do here. Because before or after the hike you have to visit the  actual Tiger Cave Temple itself! The cave is located in so called “Wonderland” which is an easy flat trail of about 20 minutes leading you though the jungle, along impressive big sacred trees, a sanctuary with Buddha statues and the homes of Monks who live here, until you reach the actual Tiger Cave. The beautiful stalactites and many other details here are absolutely worth a visit. Maybe you even encounter a friendly Monk who want to show you ‘his’ meditation cave. 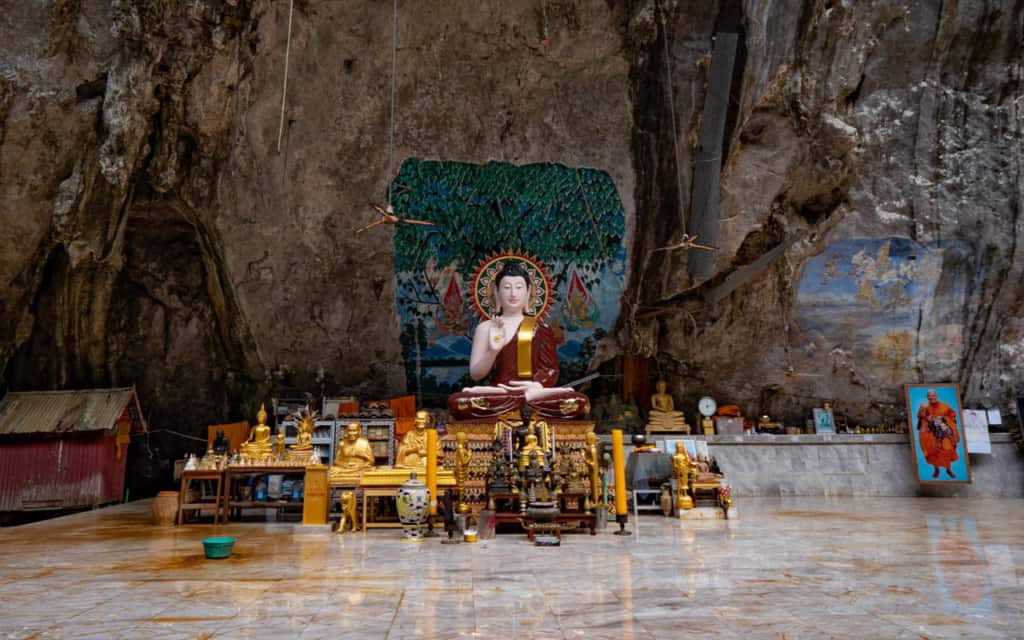 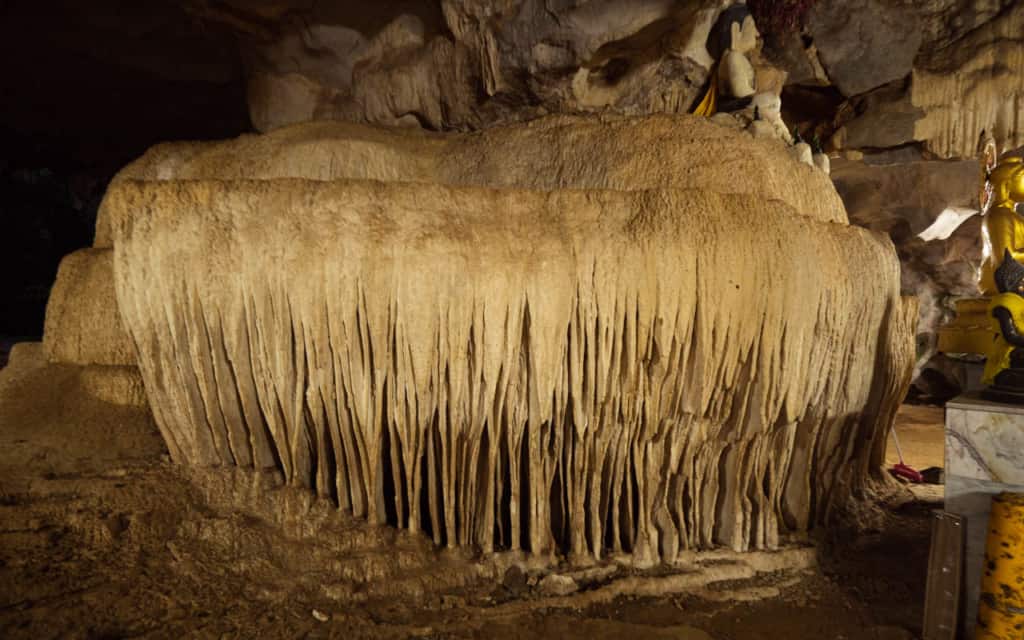 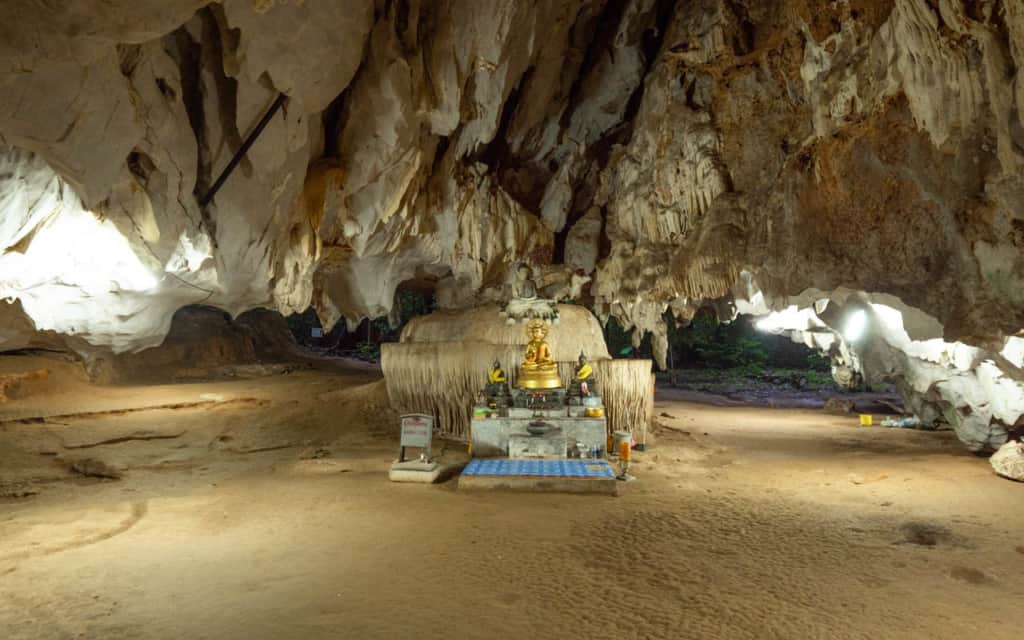 We hope you enjoyed this blog post so you’re well prepared for the Tiger cave temple hike! If you have any questions, let us know.

For more inspiration about Thailand, read these guides:

15 best things to do in Krabi

Things to do in Ao Nang, Krabi

15 best things to do in Phuket