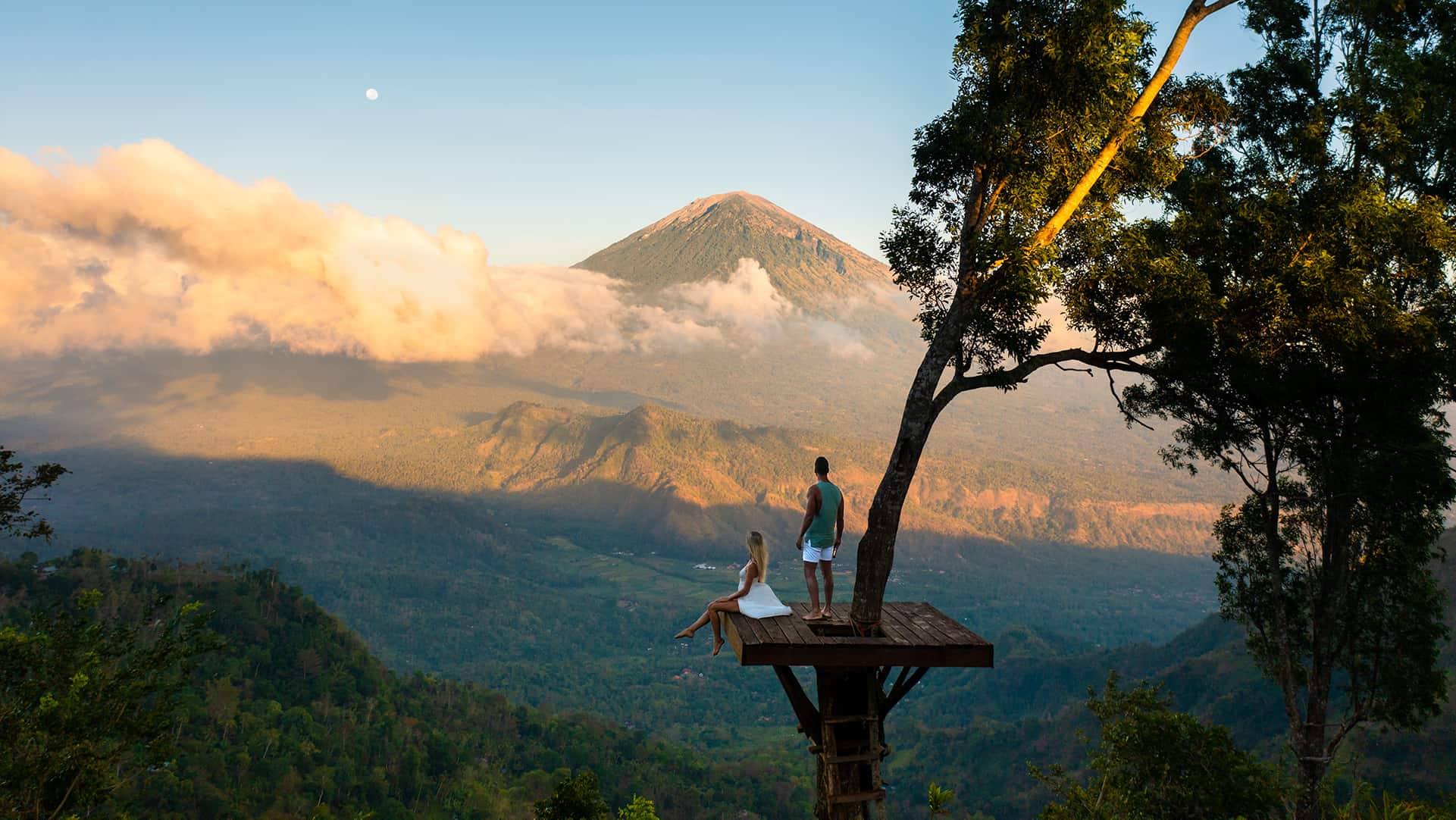 How to get to Lahangan Sweet

Lahangan Sweet viewpoint is located nearby Amed and can be easily found on Google Maps. Just follow the navigation and when you’re close to the actual viewpoint you will see a wooden sign pointing you towards a dirt road. This road is pretty steep and can be challenging with a motorbike if you’re not very experienced. Keep right on the dirt road where it’s mostly flat and hold your throttle. If you’re not feeling confident driving up this road, you can park the scooter and walk for about 10 – 20 minutes to the viewpoint.

Another amazing viewpoint close to Lahangan Sweet is Pura Lempuyang Luhur. This temple has also a breathtaking view on Mount Agung volcano and is absolutely worth a visit when you’re staying in Amed for a few days. 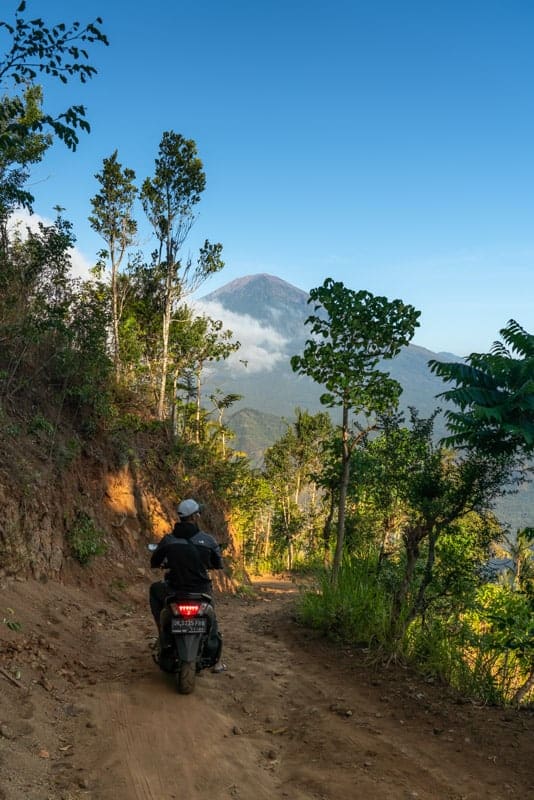 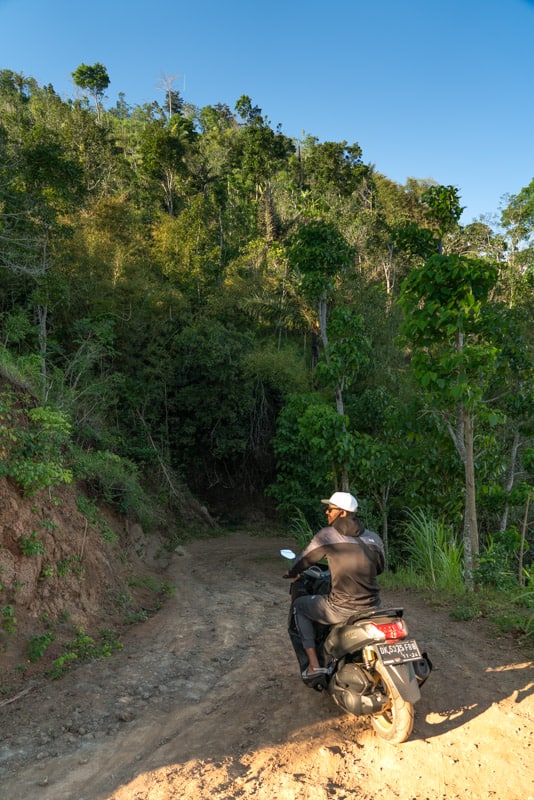 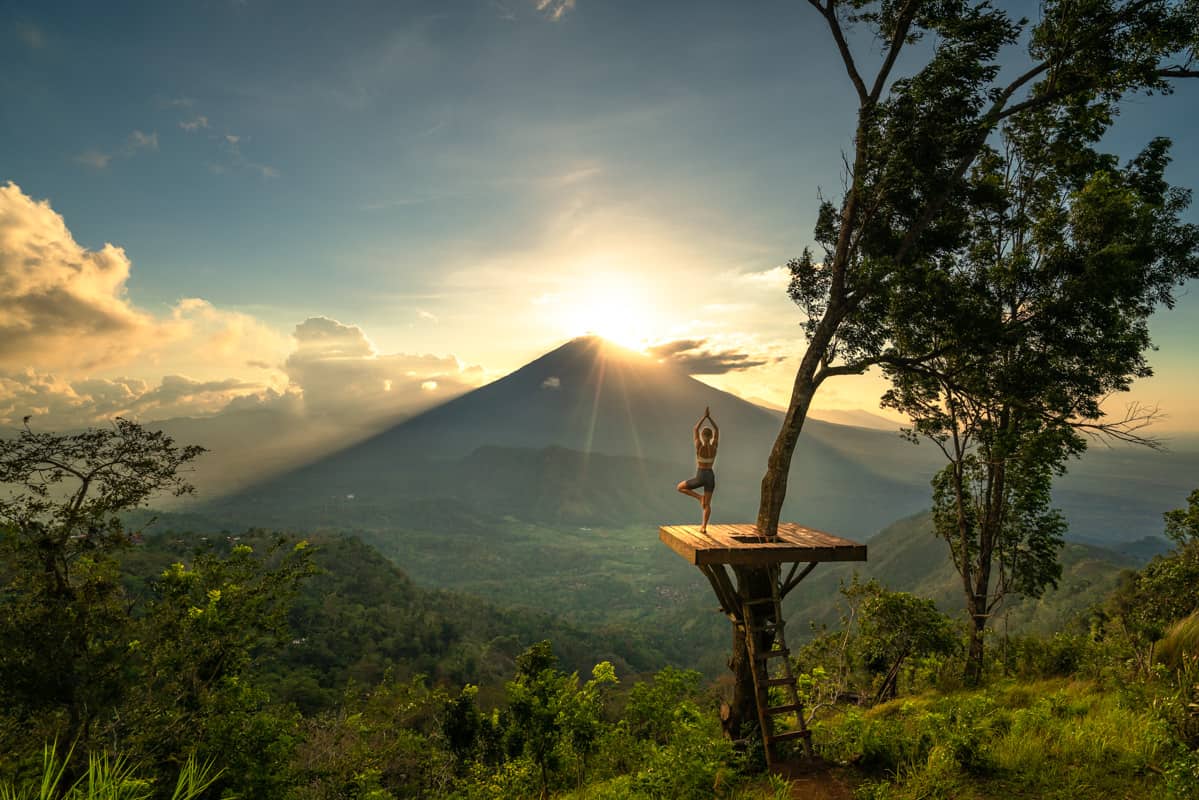 Lahangan Sweet viewpoints is also a camp spot so it’s open 24 hours. The entrance fee for Lahangan Sweet is 20.000 Rupiah per person which is about €1,20.

Because the clouds can roll in pretty quickly from inland, it is recommend to visit Lahangan Sweet viewpoint during sunrise or sunset. Also for the best light circumstances for photography and beautiful colours, early morning and afternoon are the best times to visit. We went to Lahangan Sweet with sunrise and sunset and found both amazing. We don’t have a particular favourite time, both are just incredible and can deliver a completely different experience!

With sunrise, the sun comes up from the opposite of Agung volcano, lighting up the top of the mountain first and then slowly lights up the rest of the impressive mountain. It shows all the textures of the volcano and creates a magical atmosphere. The low hanging clouds can be a great perspective to show how big Agung actually is!

With sunset at Lahangan Sweet, the sun disappears behind the volcano. So Mount Agung becomes more a silhouette, but the valley below the viewpoint gets more light. Depending on the season, the sun sets right, left or even right above the crater of Mount Agung! We were lucky to go on the exact day that the sun disappeared right above the crater! If you’re lucky, you will get treated with an incredible color bomb right after sunset. So don’t leave directly after the sun has set, but wait for a few minutes to see how the sky turns orange, red and purple! 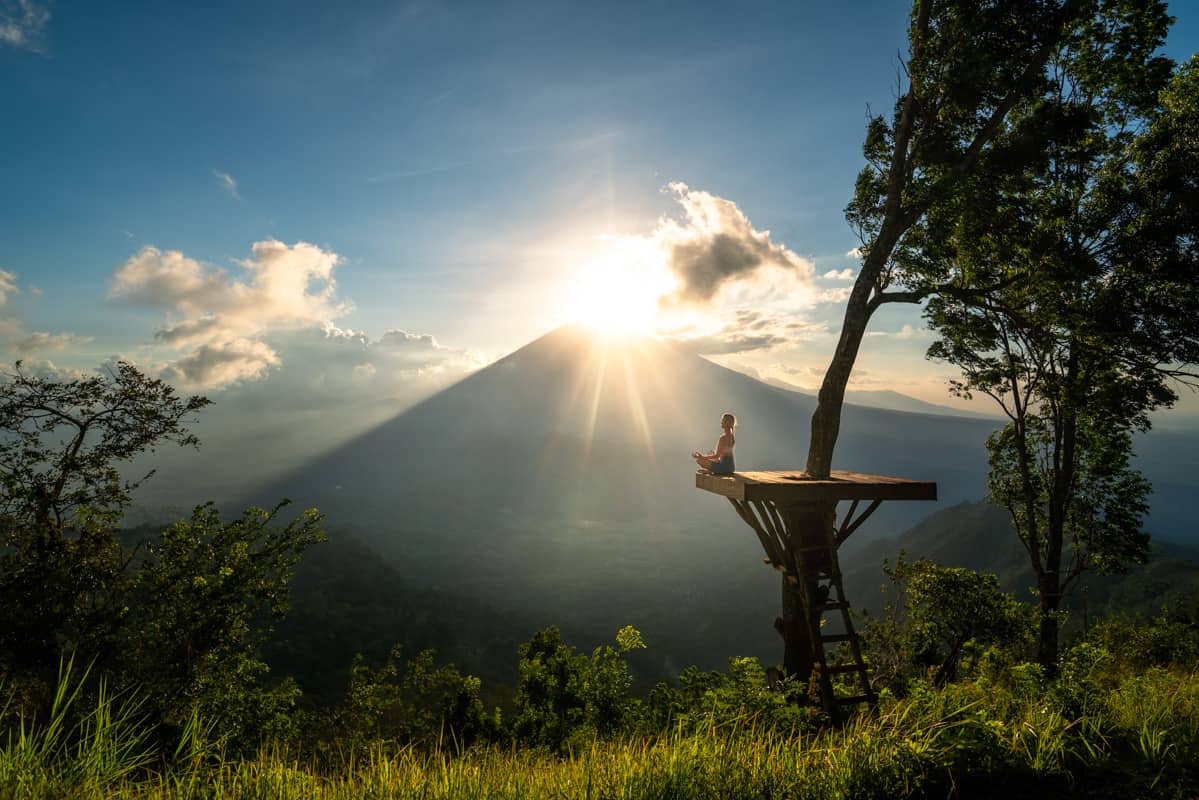 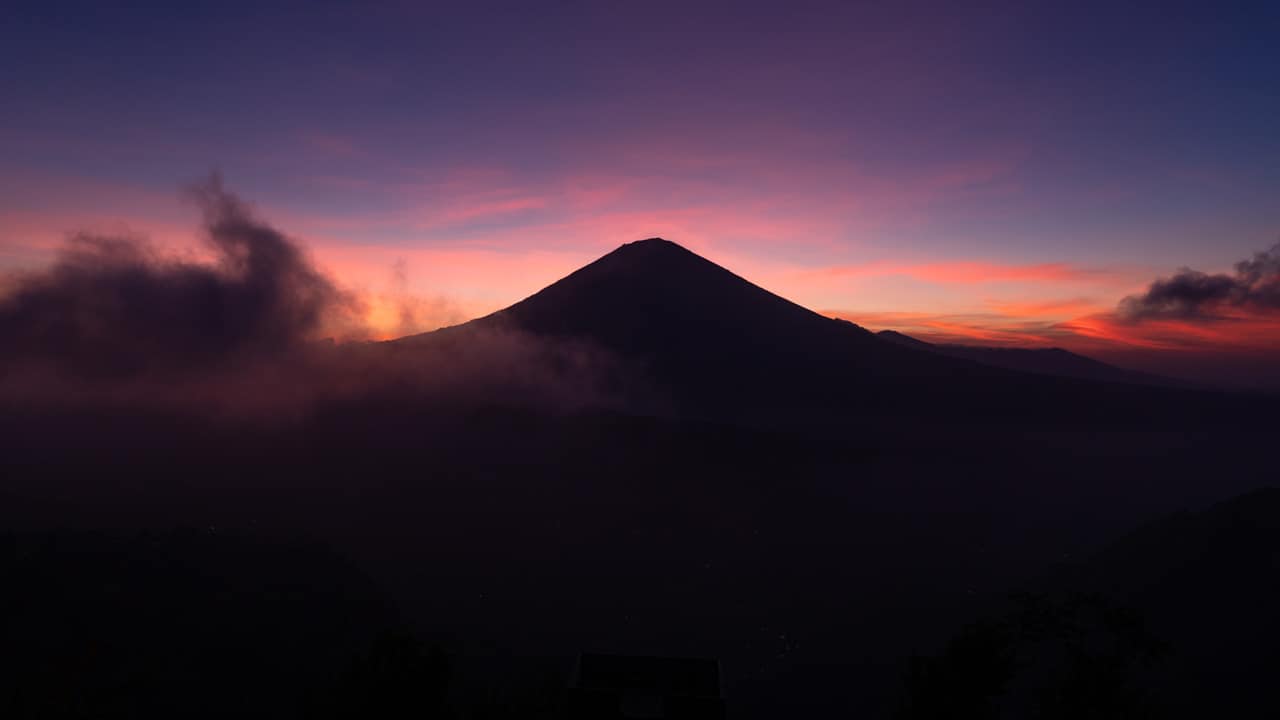 What to expect at Lahangan Sweet

Once you’ve made it to the mountain ridge of Lahangan Sweet, you will see that the viewpoint is stretched out with many different photo spots! There are quite some bamboo and wooden platforms made from where you’ll have an outstanding view on the Mount Agung, but also towards the other side facing the ocean.

You can drive with your scooter all the way to the end of the viewpoint where you’ll see a boat made of bamboo. There are also plenty of wooden seats if you don’t fancy taking pictures and just want to enjoy the view. If you need some shelter from the sun, or even worse, it starts raining, then luckily there is a bamboo shack with roof where you can hide. 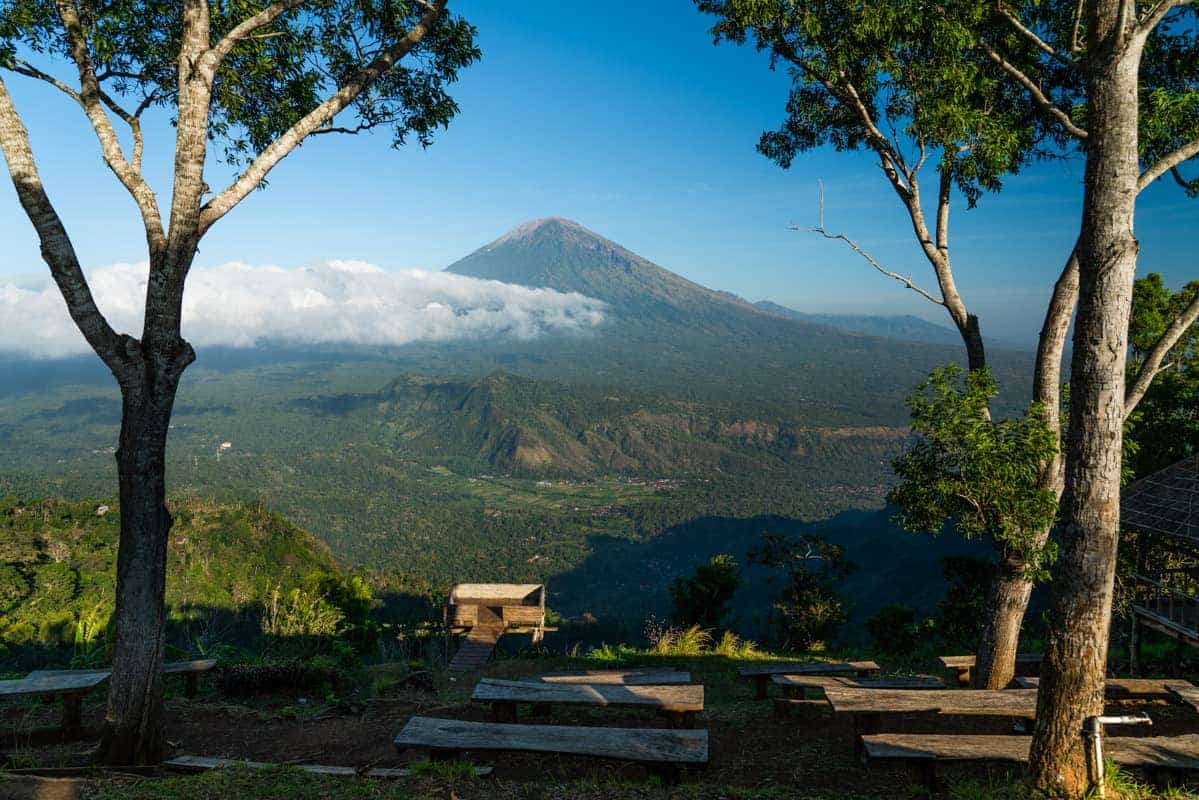 The most famous instagram spot, and in our opinion most photogenic viewpoint at Lahangan Sweet is the tree platform. You can get on top of this wooden platform by climbing a ladder. The platform is wrapped around a tree and provides a very cool photo spot with Agung as backdrop. If the photographer stands a bit higher the perspective is just incredible. You can’t mess up a photo here! Be careful when it’s windy though, it can get wild up here! 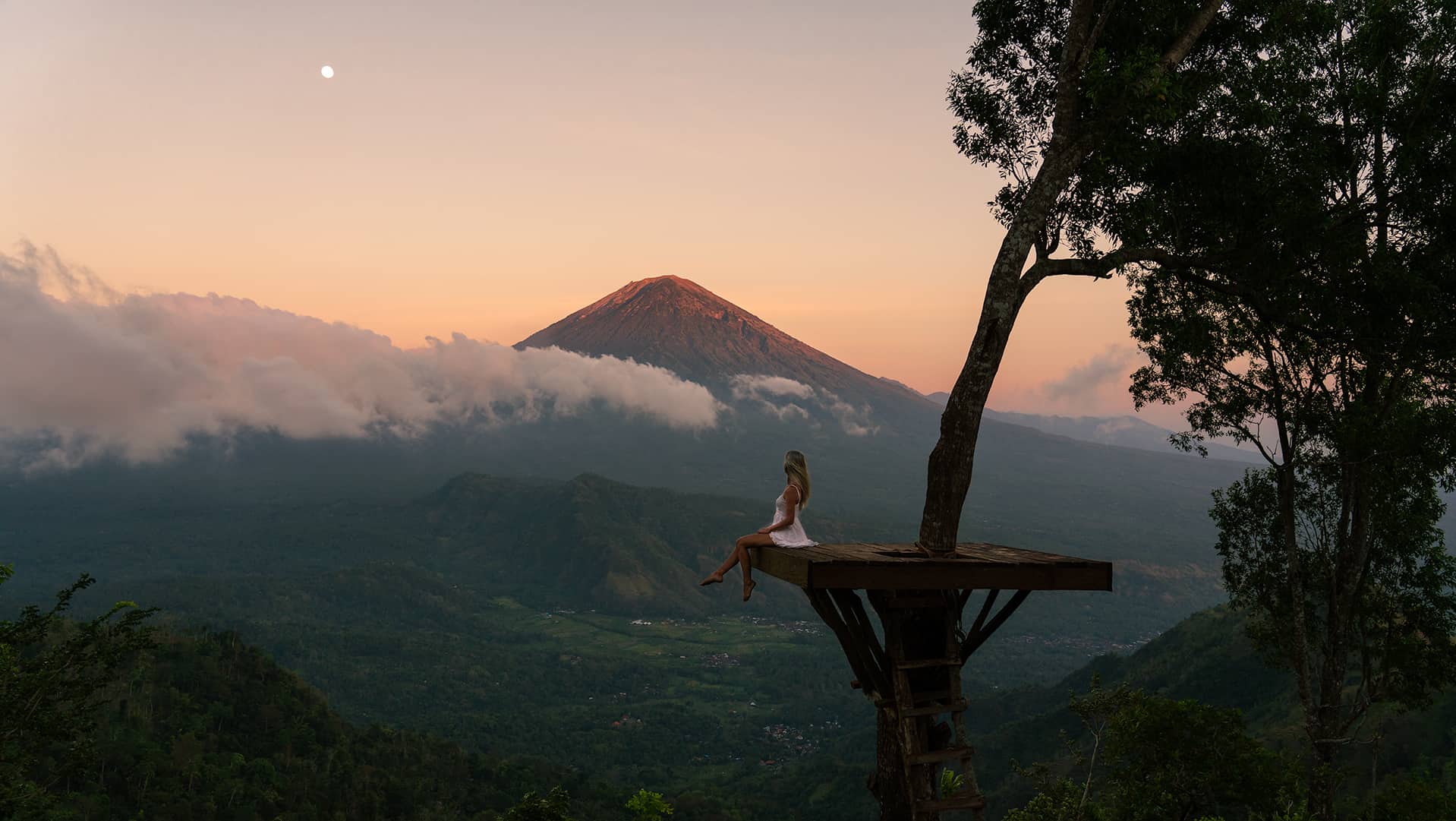 In the grass for a natural touch

In case that the man made photo spots at Lahangan are occupied, or if you want to take a picture with a more natural touch, then you can also stand in the high grass. There are some spots where you can safely enter the high grass and if your photographer stands a bit higher on the hill, you’ll have an incredible perspective on Mount Agung as well. 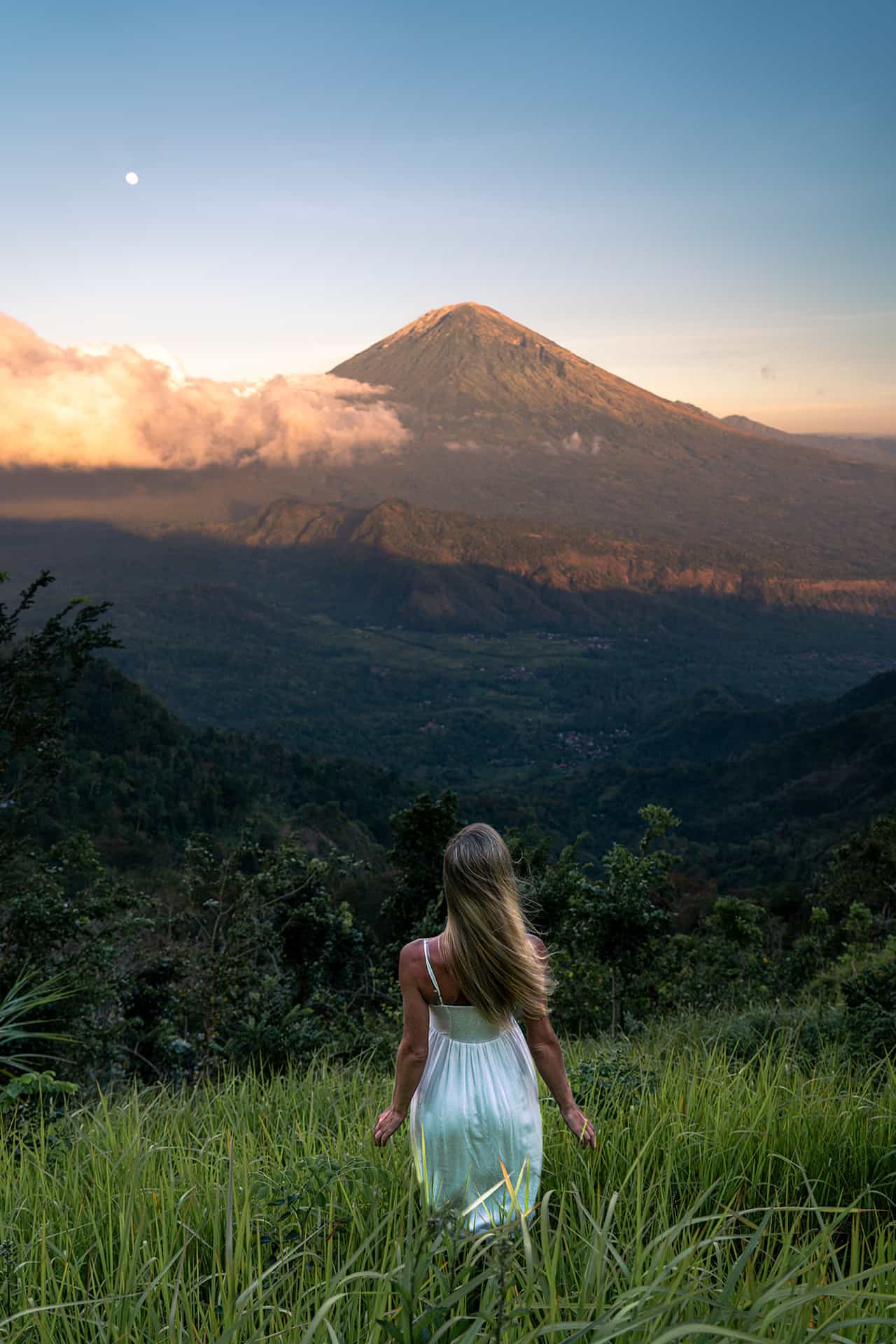 The other viewpoint is probably the first spot that catches your eye when entering Lahangan Sweet. This bamboo square terrace is built on poles and provides an incredible view facing Agung. Personally we found this viewpoint less interesting to take pictures, but it’s for sure a great spot to take a quick picture! 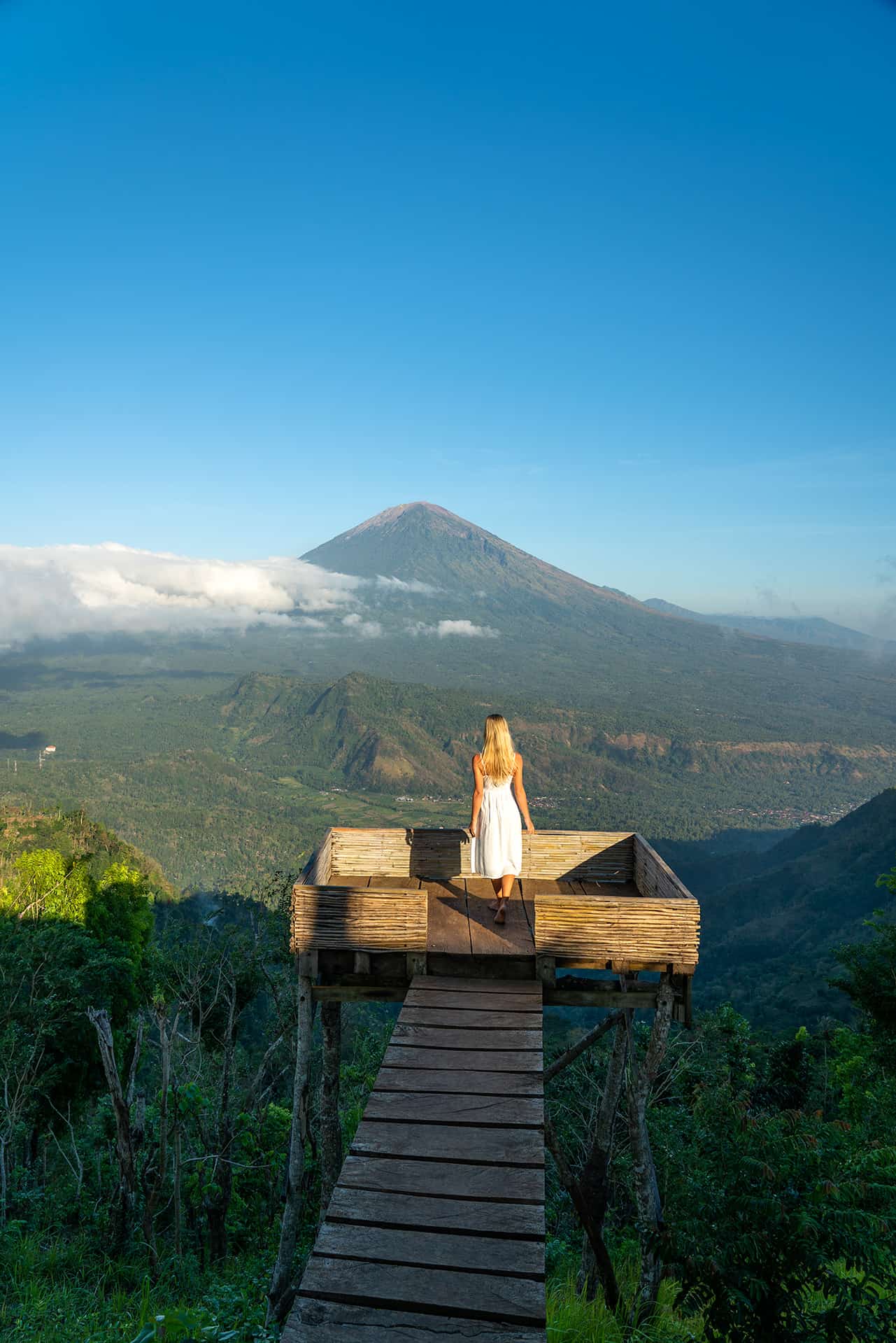 A bit further on the mountain you will find a few other viewpoint of Lahangan. But these photo spots didn’t face Mount Agung, but the other side towards the ocean, mountains and Amed. The bamboo boat is the one we liked the most. From this side you can perfectly watch the sunrise in the morning. 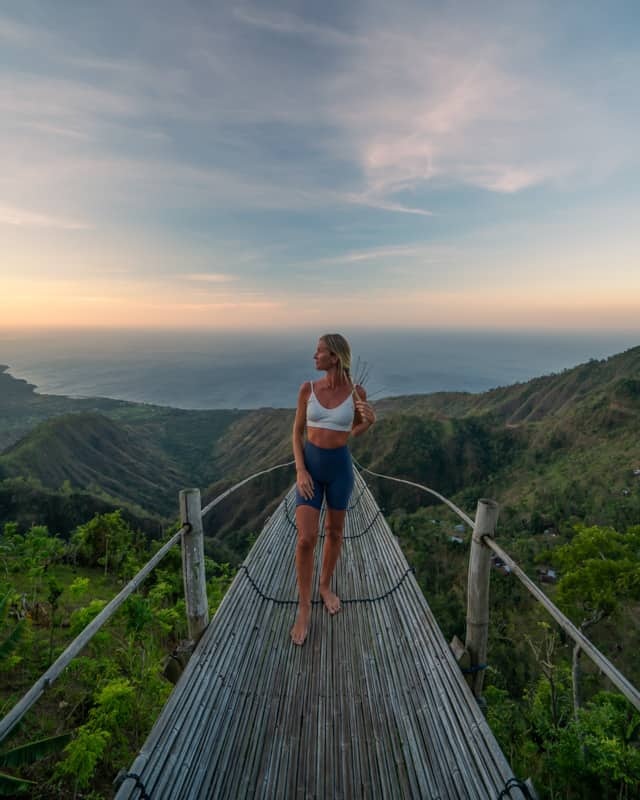 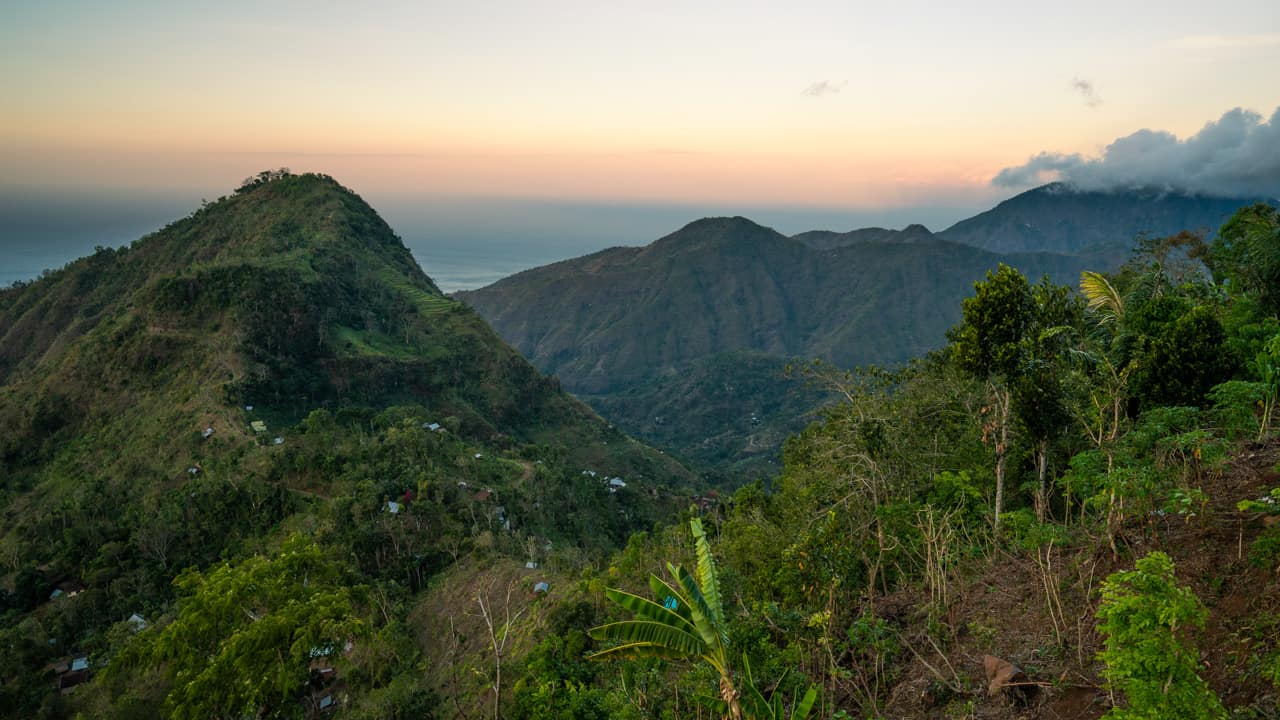 There are a few breathtaking viewpoints on Mount Agung in East Bali. Lahangan Sweet is without a doubt our favourite viewpoint of Mount Agung. But if you want something else, or you’re in search of your next sunrise adventure with views on the volcano, then below some other spots close to Amed!

Bukit Cinta is a well known viewpoint in Amed that offers amazing views on Mount Agung. This viewpoint is free to enter and is actually located right next to a small road. On arrival you will see a vast stretch of rice fields and the impressive Mount Agung on the horizon. You can stand in a grass field which gives a great perspective towards the rice fields below the mountain and the mighty Mount Agung in front. 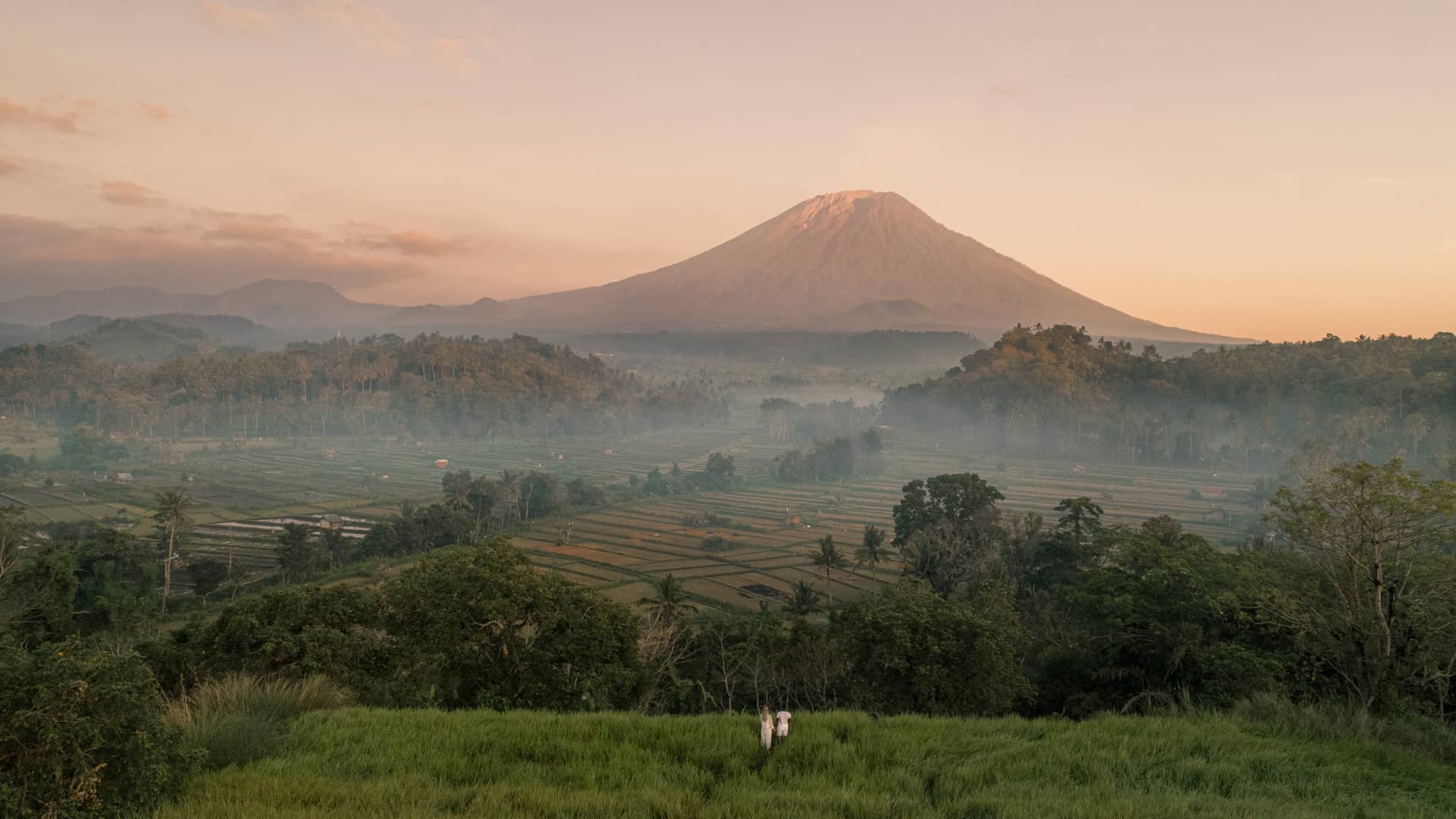 Bukit Dausa is more of a hidden gem and a viewpoint for people who literally like to go off the beaten path. This viewpoint has just like Bukit Cinta great views on Mt Agung with an amazing foreground of green lush rice fields. You have to walk for 10 minutes through the rice fields until you reach the viewpoint Bukit Dausa from where you’ll have the amazing view as can be seen below on our picture. 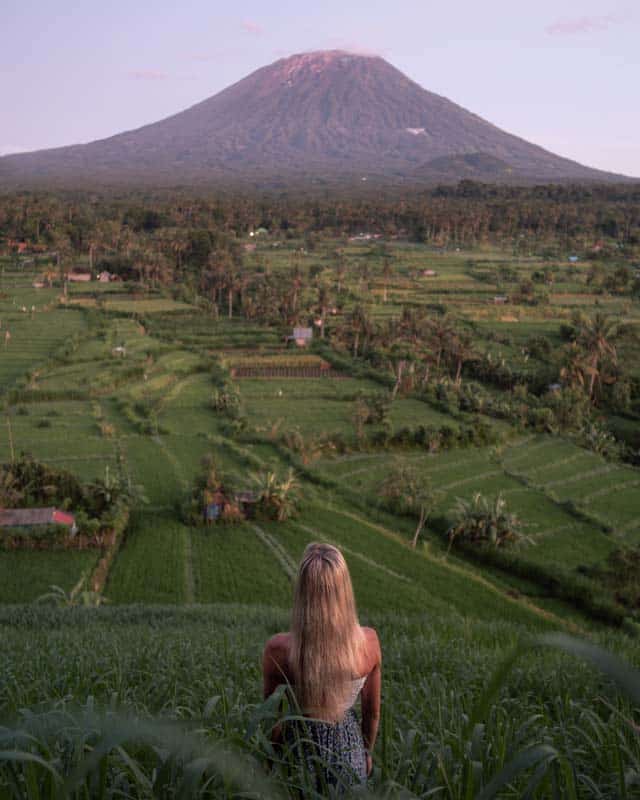 This Mount Agung viewpoint has become incredibly popular on Instagram. Pura Lempuyang Luhur temple is one of the oldest and most sacred temples on the island. Also known as “Bali’s gateway to heaven” because of its amazing view on the Mount Agung volcano through the perfectly framed temple gates. Here you can take your typical Bali picture in between the gates of this temple with direct views on Mount Agung. 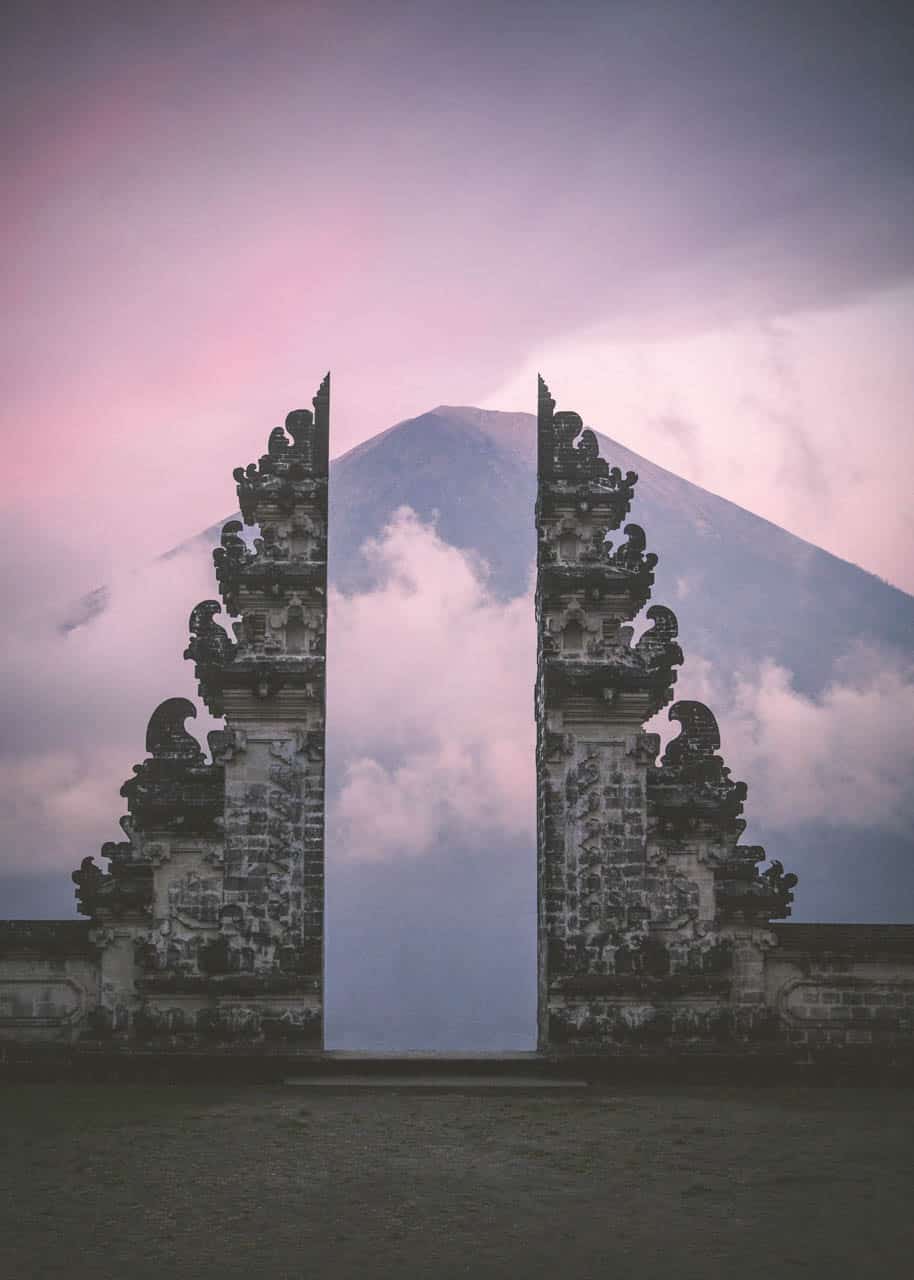 The Mount Agung volcano is the highest and holiest peak of Bali standing at 3031 meters above sea level. The stratovolcano is still active and has a rich history revolving around Balinese myths and legends. It is part of the Balinese religion and culture, making it the islands most sacred mountain.

After being asleep for more than 100 years, the Mount Agung Volcano came back to life on February 18th in 1963 and had one of the largest eruptions of the 20th century. This natural disaster had heartbreaking consequences with the many villages that were destroyed and more than 1000 people that lost their lives.

The last eruption of Mount Agung was in 2017 and 2018 when large ash clouds rose to elevations of about 4000 meters! Fears of hot lava blocks, pumice, ash and volcanic gas flows made the Indonesian government decide to evacuate about 100,000 people living within a 10 kilometer radius of the volcano.

Luckily the Mount Agung is mostly quiet ever since, but its activity is closely monitored to protect the people that live nearby. 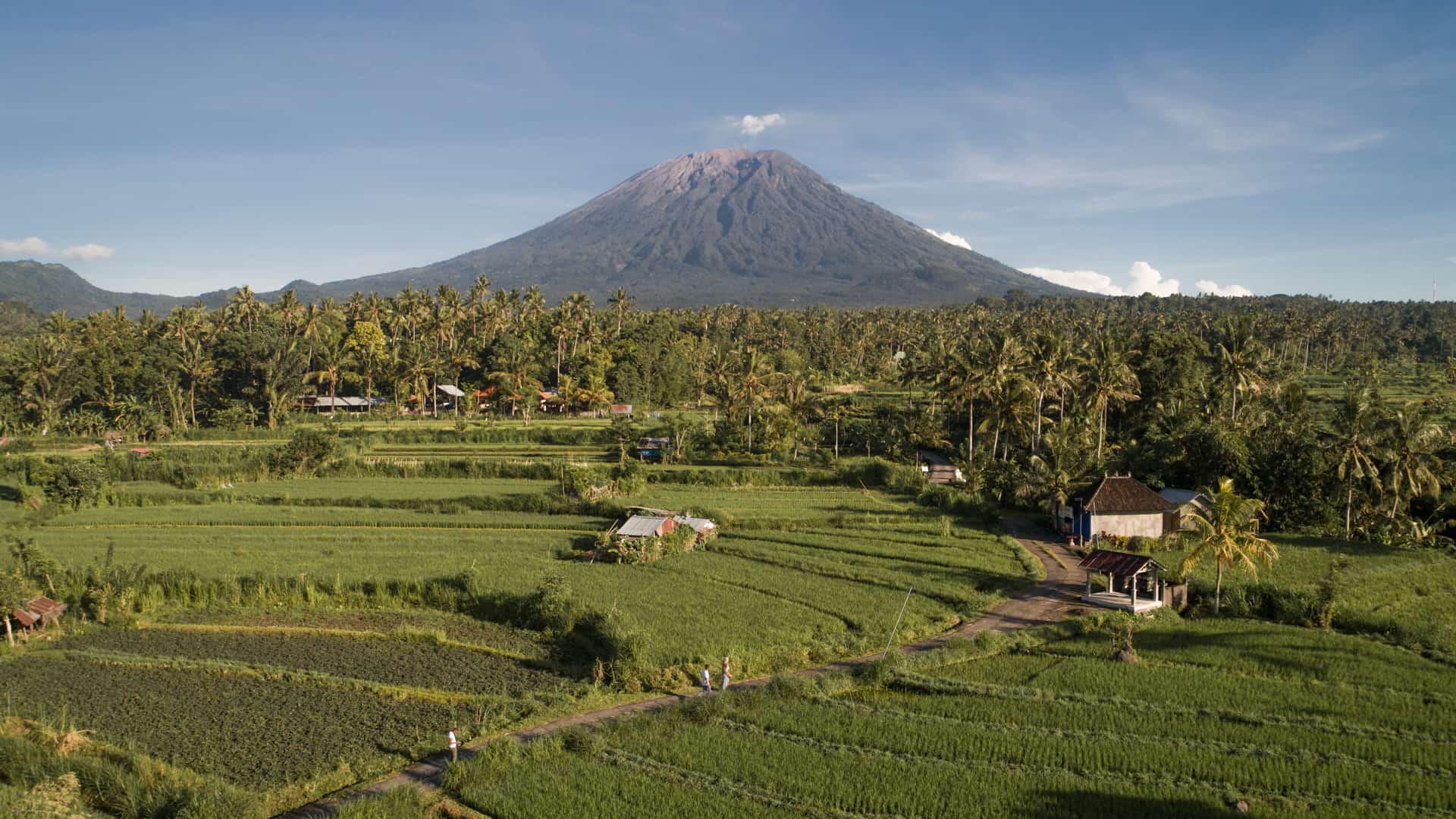 I hope you enjoyed this blog post about Lahangan Sweet viewpoint in Amed. For more Bali travel inspiration, head over to our other Bali blog posts.

25 most beautiful waterfalls of Bali

Most amazing Bali ricefields to explore