Ilheus da Ribeira da Janela is a collection of two unique rock formations located a few meters from the coast in North Madeira. This epic spot with rocky beach is still an ‘off the beaten path’ location, but definitely worth it to visit. Facing north east, you can watch the sunrise here in summer season. During the winter months the sun disappears behind the mountains. With the stunning backdrop of these two impressive and uniquely formed rock formations, you can’t miss this spot when exploring Madeira’s north coast. Located close to Porto Moniz, you can easily combine it with a visit to the Porto Moniz Natural Pools. Read in this blog post everything you need to know about the Ribeira da Janela rocks.

How to get to Ilheus da Ribeira da Janela

The Ilheus da Ribeira da Janela rocks are located on the North Western part of Madeira Island in between Seixal and Porto Moniz. From the main town of the island, Funchal it takes about 50 minutes over 45 kilometres to get to Ribeira da Janela with your rental car. There is a parking lot right before you enter the beach. The best way to explore Madeira island with is by rental car. There are buses going over the island, but it’s not the best idea to explore Madeira Island by. So I also won’t recommend going to the Northern part of the island by bus as it will take you so much time.

A visit to the Ribeira da Janela rocks can be perfectly combined with exploring Seixal Beach and the Porto Moniz Natural Pools which are both just ten minutes away. 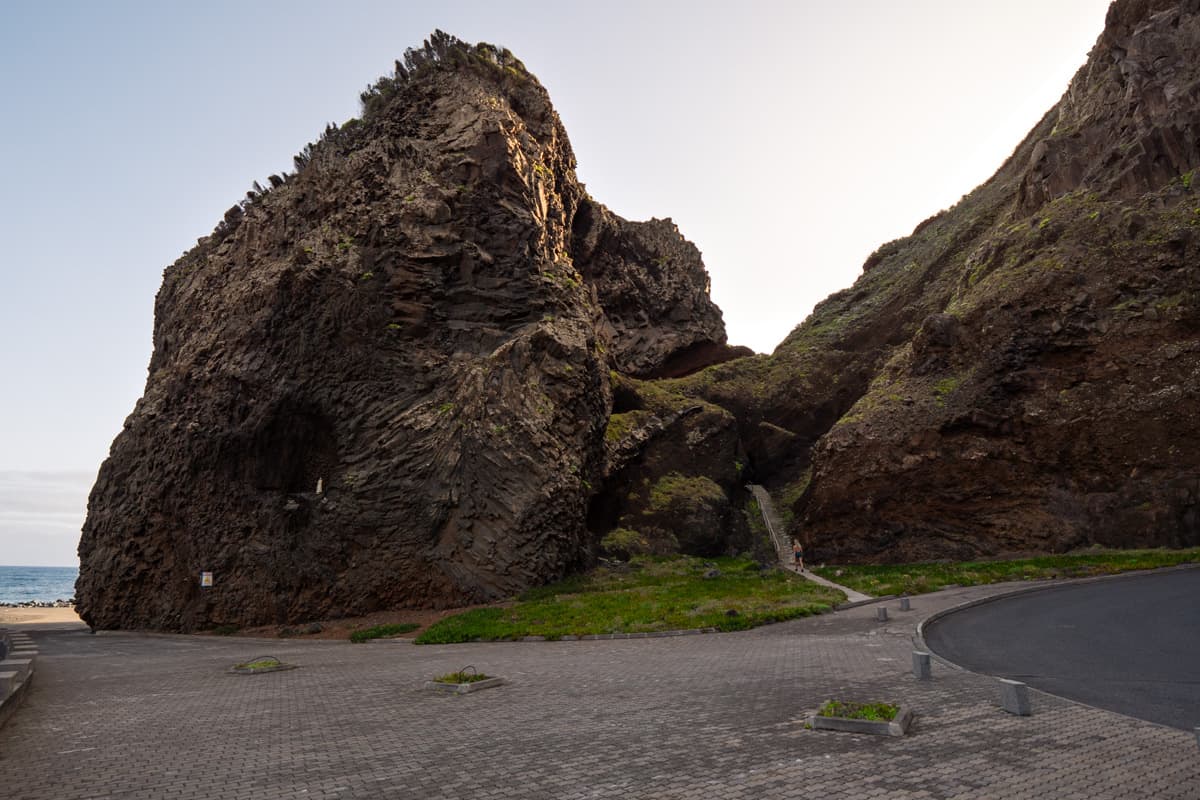 What to expect at Ilheus da Ribeira da Janela

From the parking the Ilheus da Ribeira da Janela rocks are just around the corner. There are two ways to get to the beach from where you can see the remarkable rock formations in the ocean. One option is to go via the stairs through the rock. Then you will reach a kind of viewpoint from where you can see the rock formations from a bit of higher perspective than from the beach. If you just walk around the corner onto the rocky beach from the parking lot, you will see the impressive rocks right in front of you. 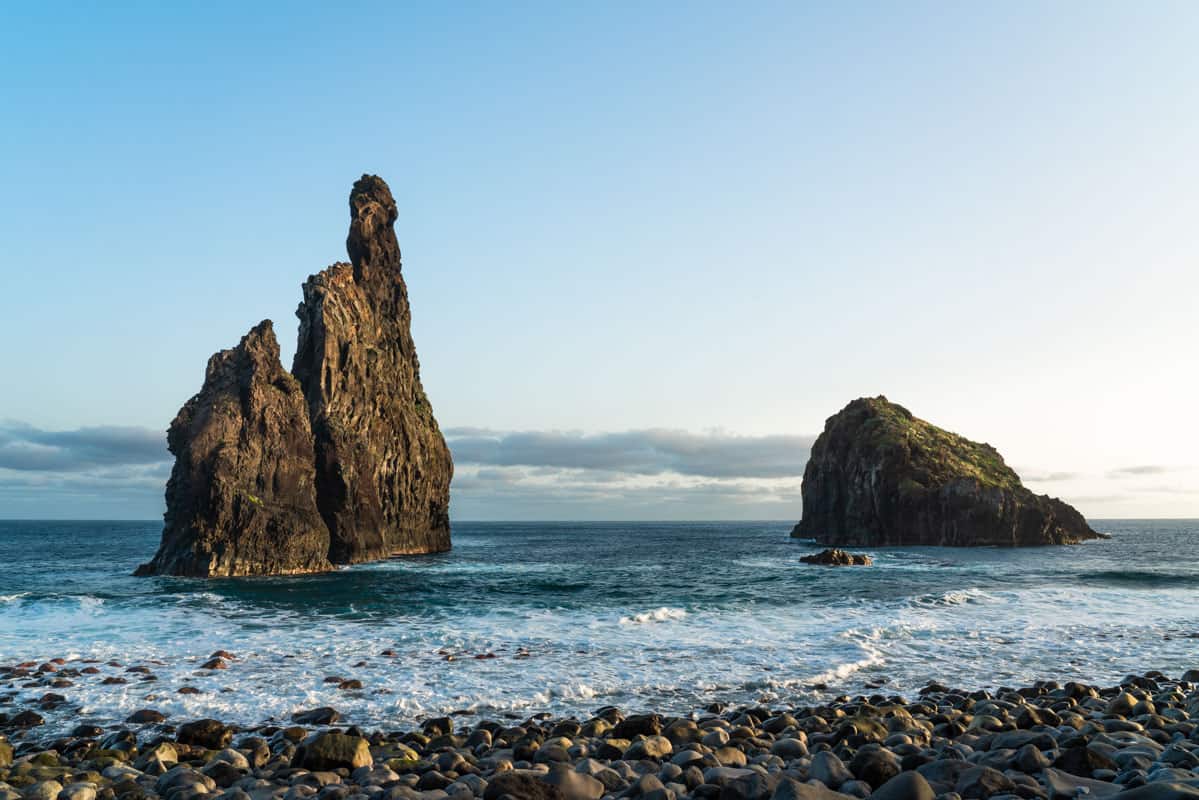 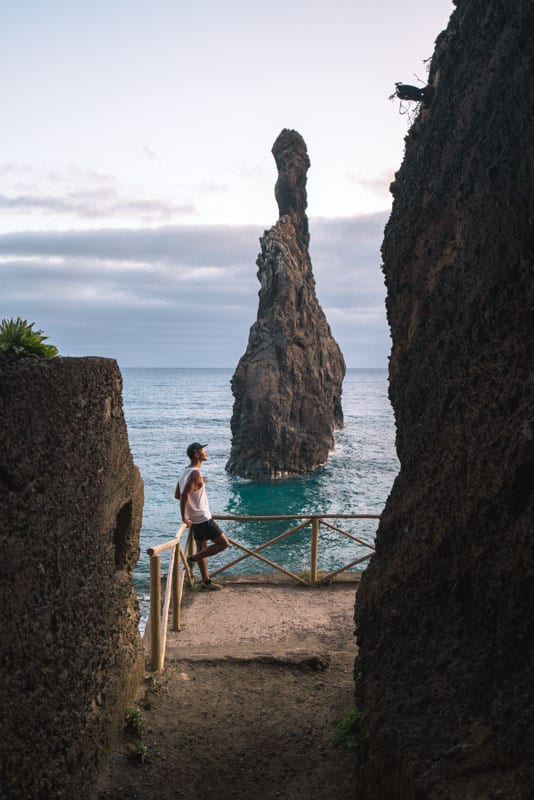 We have been to the Ribeira da Janela rocks three times during the 6 months we stayed on Madeira Island. One time during the day because we were just passing by, and two times we went with sunrise. Once in August and another time in November. It turned out that the sun disappears behind the mountains in the winter months, so to actually see the sunrise at this beach, you have to come in the summer months. 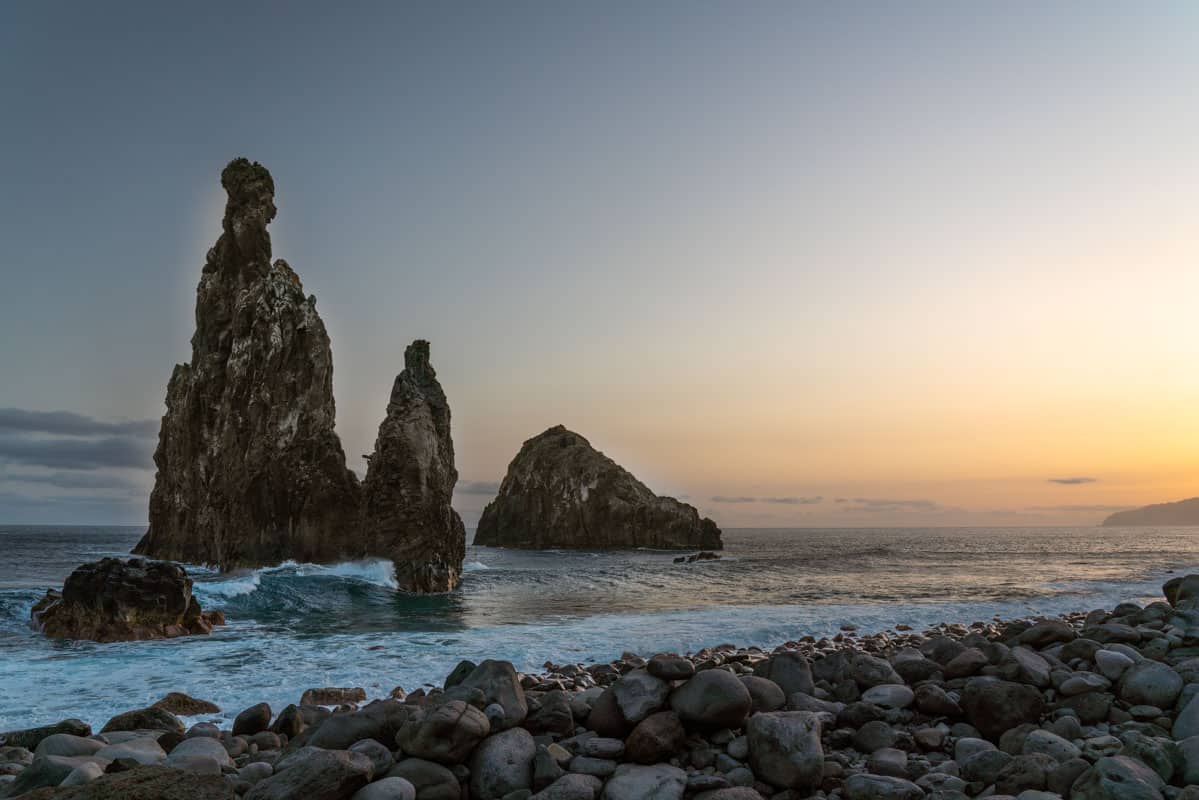 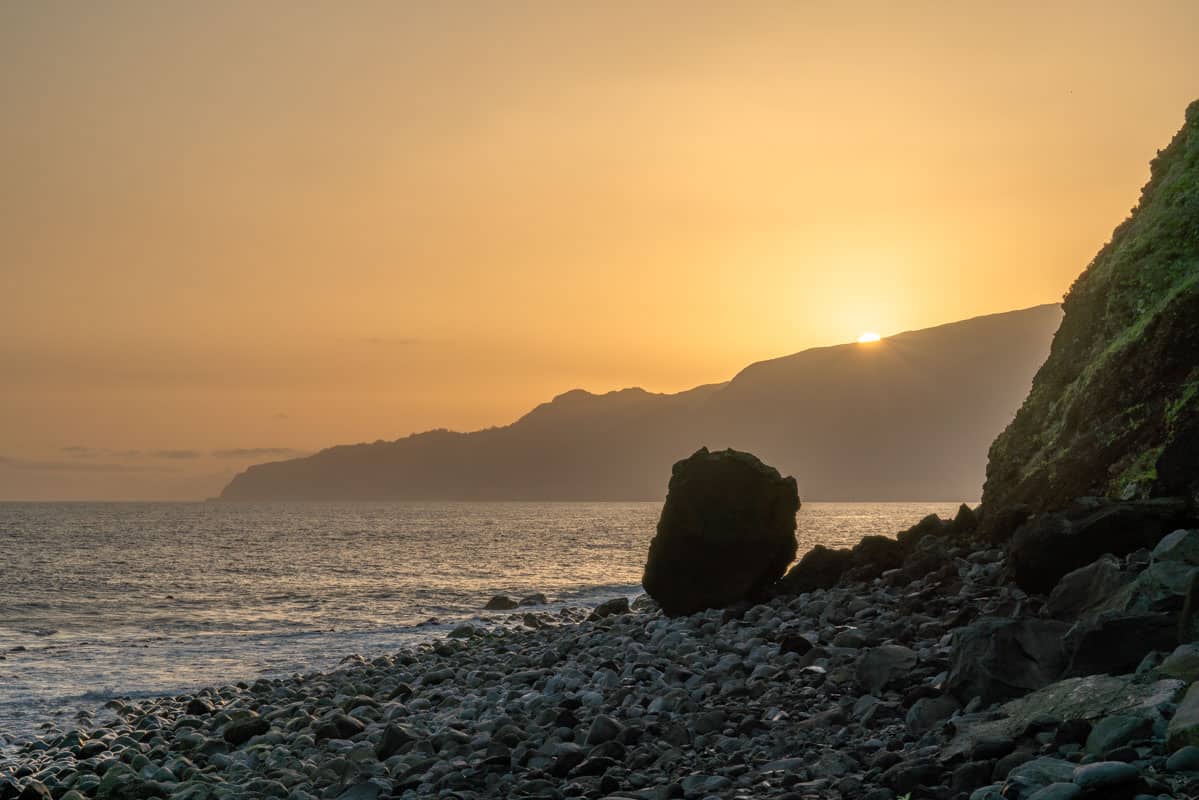 For photography you will still have that beautiful soft morning light from the side during the winter months. But if you want to have the sun in your frame, the summer months are the only option at this side of the island. 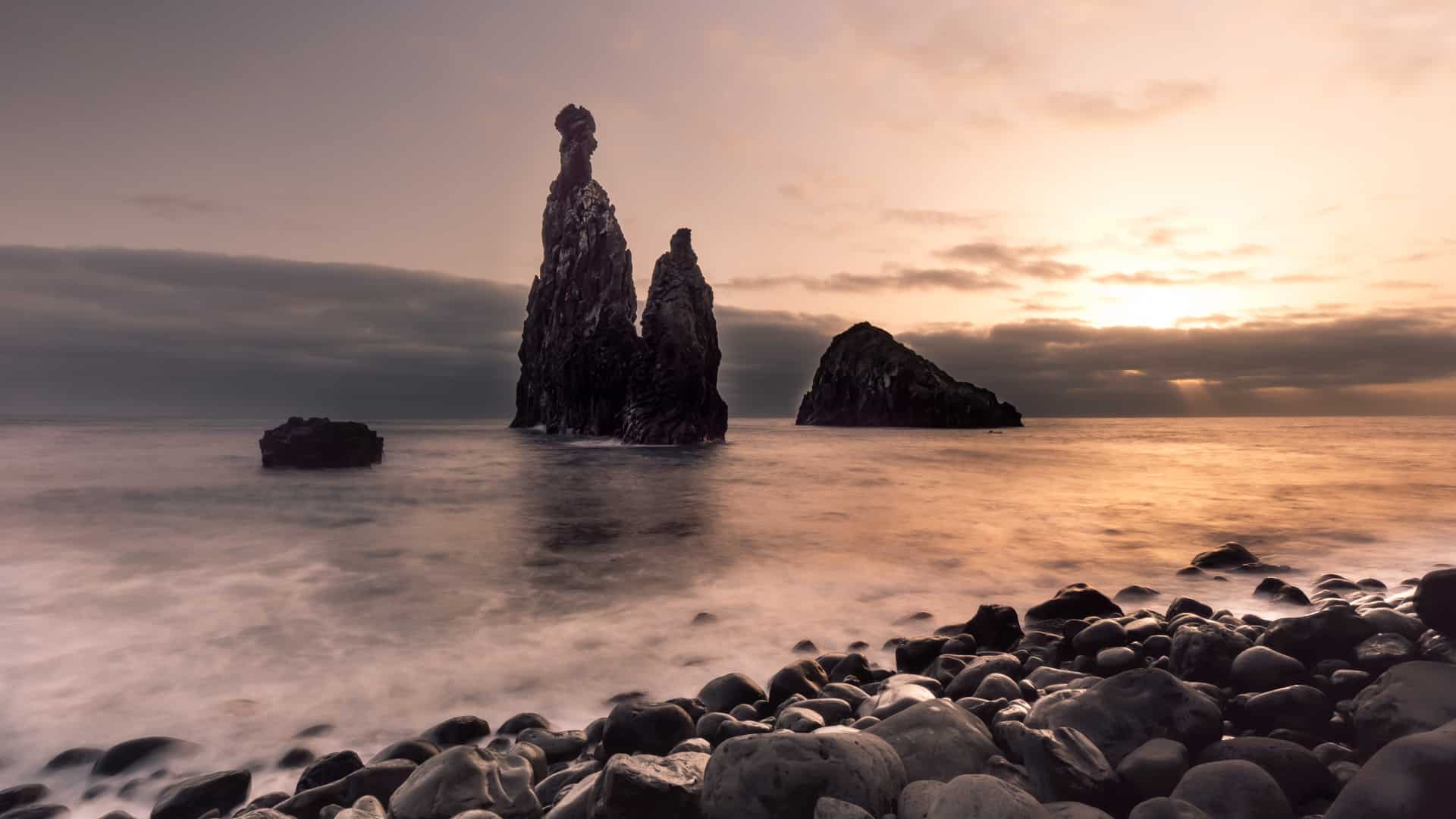 When we went in August for the first time to the Ribeira da Janela rocks, I wanted to try some long exposure photography. It was a bit of a moody sunrise with low hanging clouds, but that brought an even more mystical ambiance to the scenery. I tried a few long exposures which was a little challenge with the waves coming in every now and then. So I had to time the right moment of pressing the shutter button with the incoming waves. Below some of the results. Maybe not the very best long exposure. But with a Micro 4/3 sensor in these moody circumstances, I am not dissatisfied. It just can always be better. Especially since we switched to our Sony Full Frame cameras a few weeks after visiting.

For photographers there are some interesting angles to find. Lower your camera and find some foreground to create more depth in your picture. Or use the hallway when entering the viewing platform to use the leading lines towards your subject, the Ilha da Janela rock. Explore the beach to find some new interesting angles or fly the drone to see some arial perspectives of these impressive rocks! 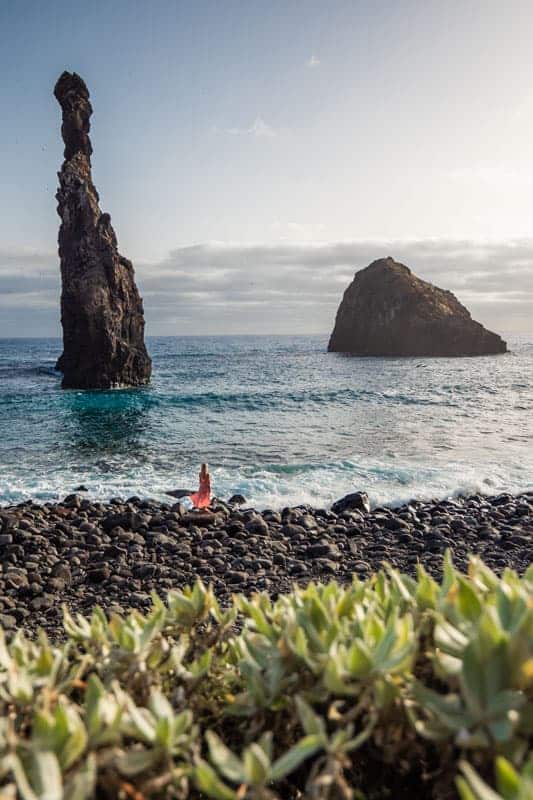 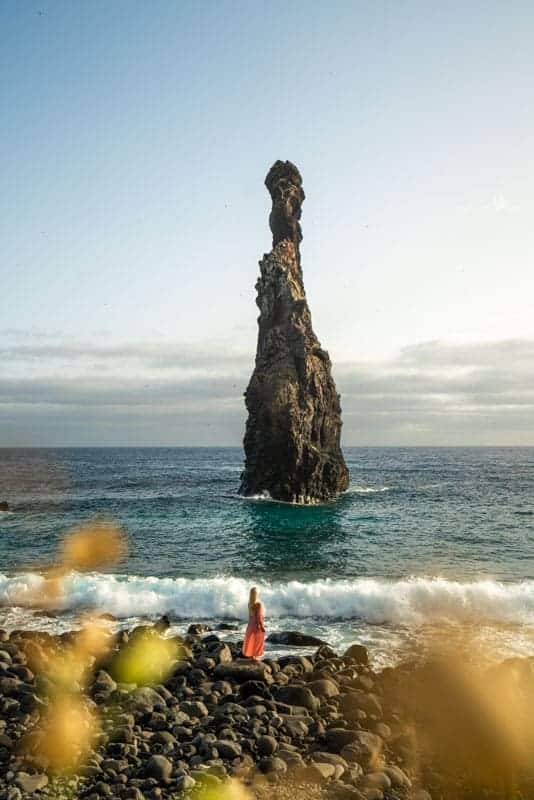 If you have a drone you should definitely fly it here to see the epic coastline and Ribeira da Janela rocks from the air. Watch out for swallows because there are many of them circling around the top of the rocks and ready to attack your drone. With the drone you can see the rocks from every side which is interesting to see because the rocks have a completely different perspective from every angle! If you stand right in front of the rocks, the left one looks like a spired rock. While if you see the rock formations from the side, you can see they are actually quite wide with a few holes in them. Atiba managed to get the sun exactly in one of the holes, creating a nice sun flair through the epic rock formation. 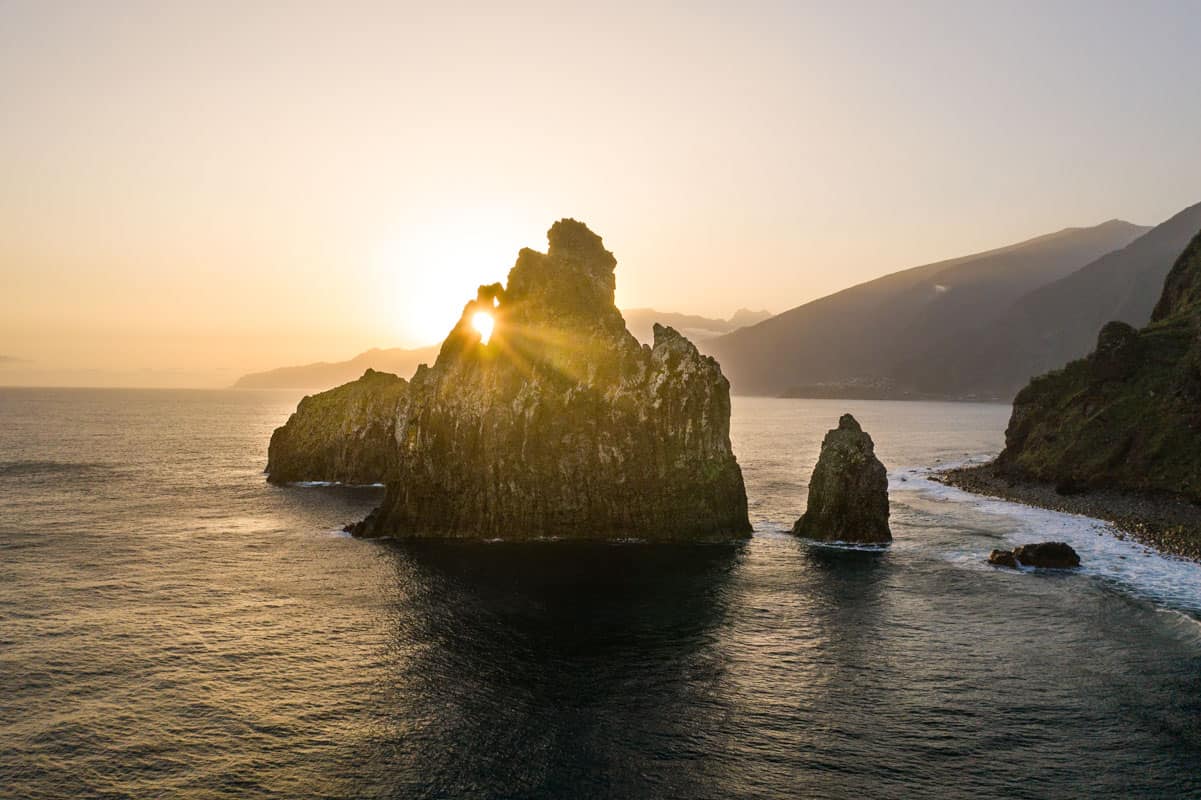 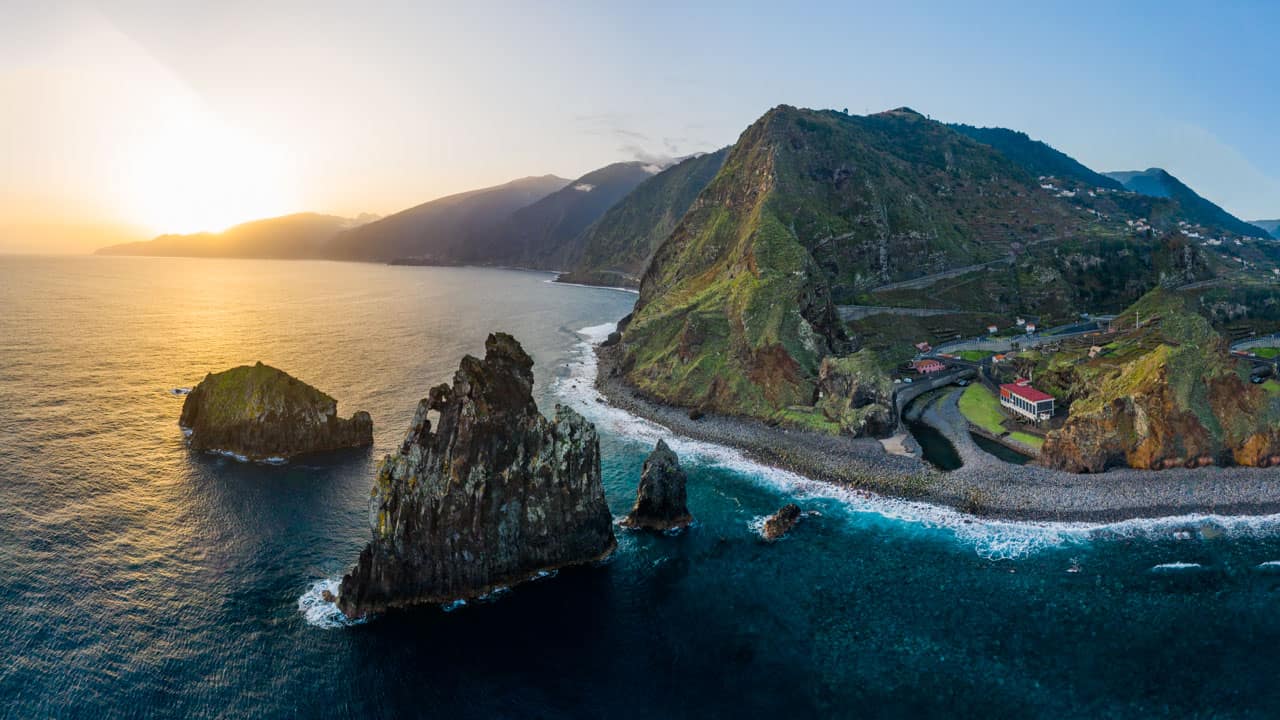 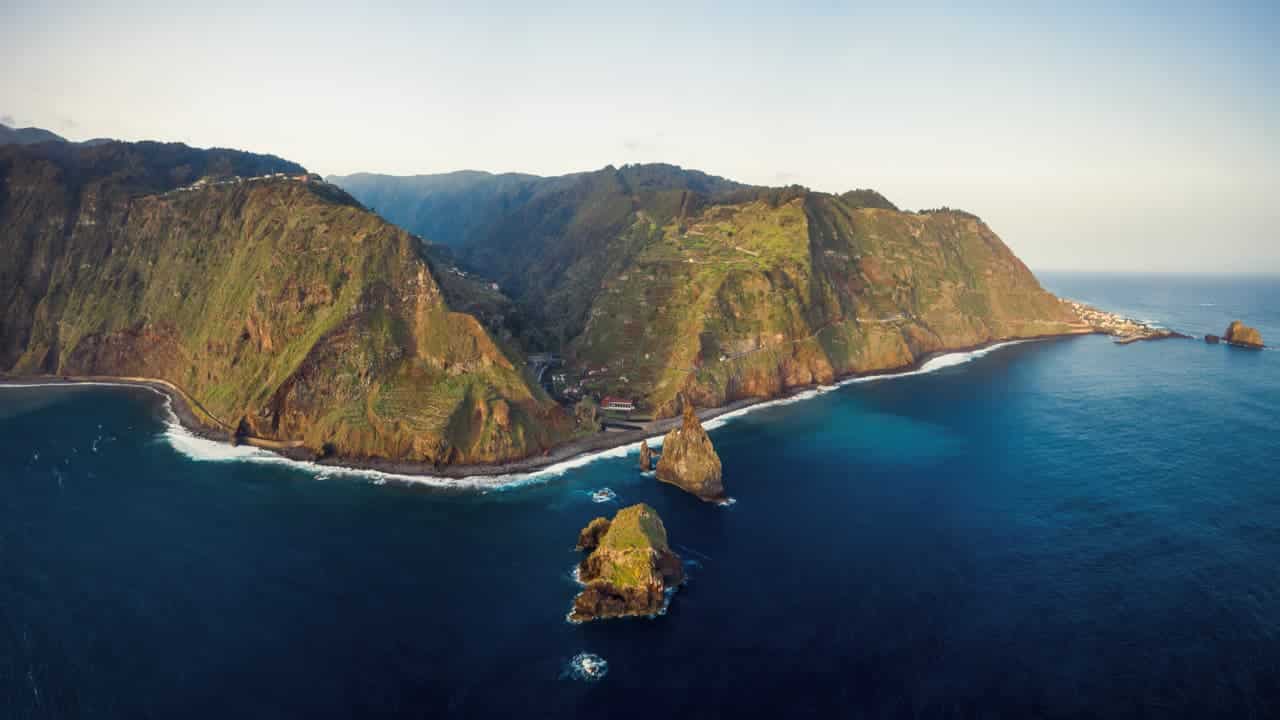 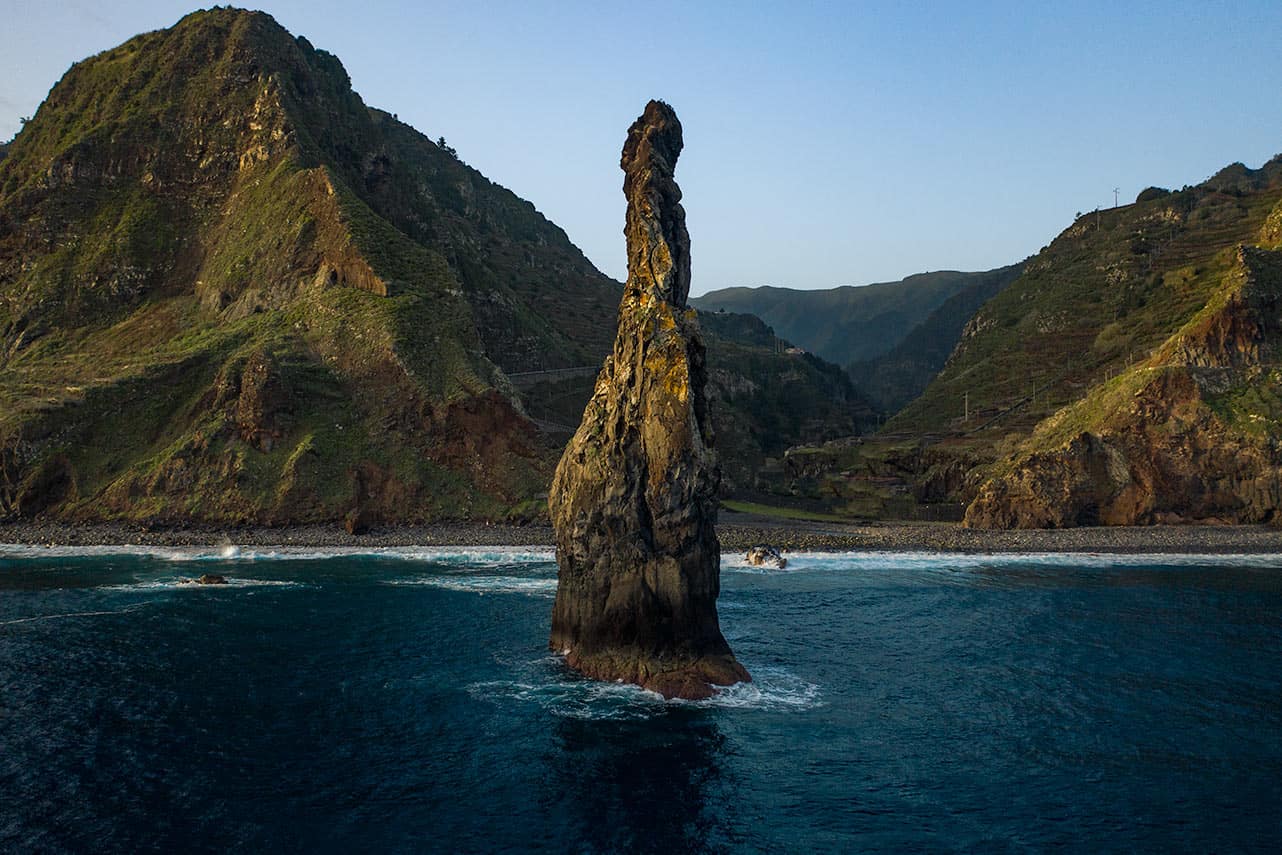 I you fly the drone here, don’t forget to check out the small village of Ribeira da Janela. It is beautifully located along the coast in this green valley. 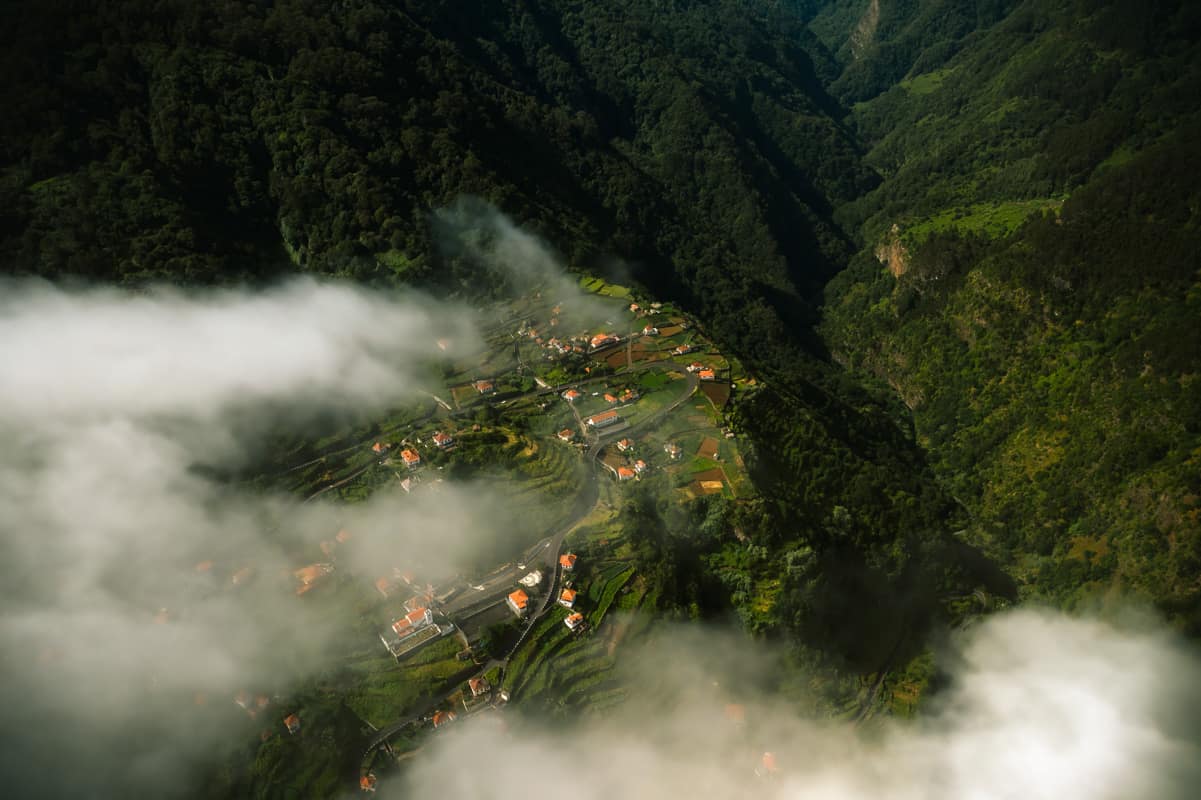 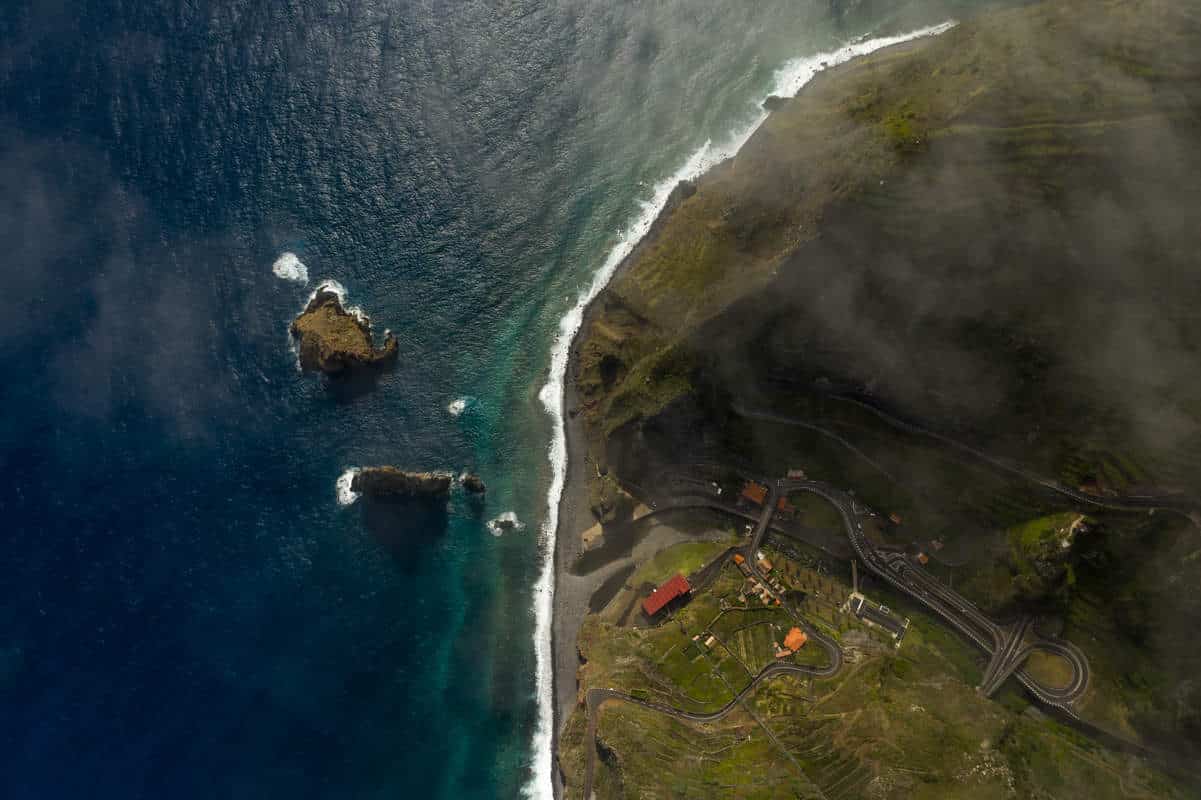 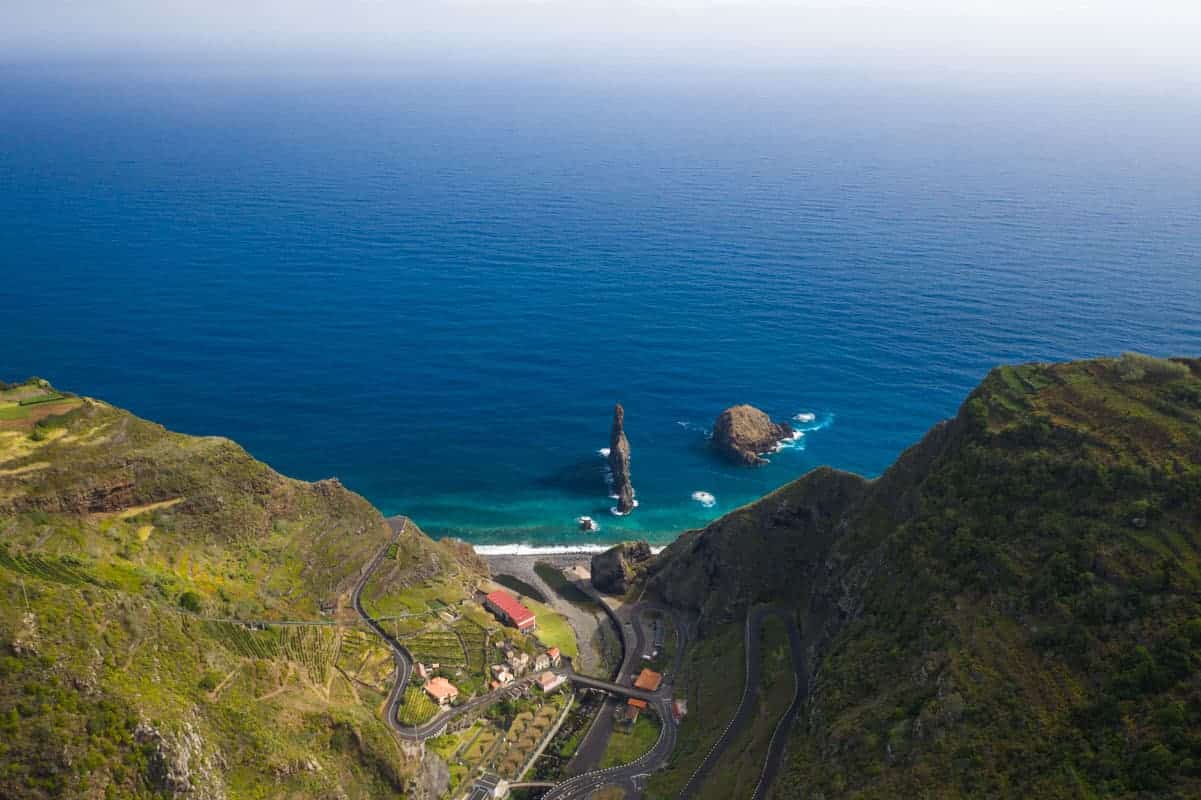 If you don’t have a drone but you want to check out the Ribeira da Janela rocks from a different perspective you can go to a few viewpoints in the near area. There is one I wouldn’t recommend because the view is a bit overgrown. This is Miradouro da Fajã do Barro which is a 20 minute drive up on a steep road but with disappointing views.

Another viewpoint you will pass is Eira da Achada, and an unnamed Miradouro right before Eira da Achada. This unofficial viewpoint has views on the ocean and a part of the small village. But if you walk on the dirt path towards the cliff edge, you can see the Ribeira da Janela rocks from above! Follow the path through the grassland until you reach the cliff edge and you’ll have a stunning view towards the east coast and straight on top of the impressive rocks! Sometimes the ‘unofficial’ viewpoints located a bit ‘off the track’ are even better than the ones that everybody goes to! 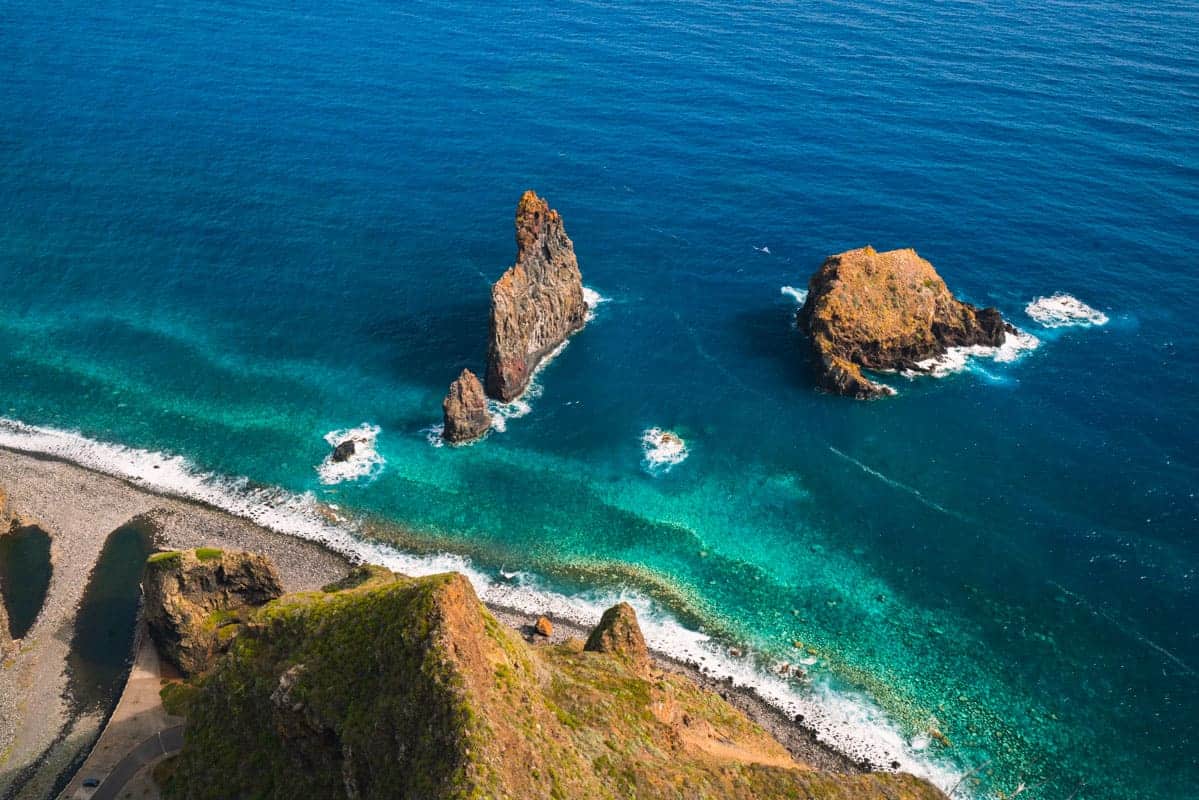 I hope you enjoyed this full guide about the Ilheus da Ribeira da Janela rocks. For more Madeira travel inspiration and the must visit destinations, head over to our other blog posts about Madeira island.