Once a year during the full moon of the twelfth lunar month in November, Chiang Mai turns into a magical city of lanterns and lights. The Loy Krathong festival takes place together with the Yi Peng festival. Thousands of lanterns illuminate the night sky which is very enchanting. The events are being held over three days at different locations, but preparations start a week before.

If you want to experience this festival and make some amazing photos you have to know a few things before you go. There is an organized mass lantern release at a few locations which is a paid event. But in the city of Chiang Mai are also lots of locations where the rice paper lanterns will be released to the sky and Krathongs, Thai floating lanterns, into the river. We have been to the paid mass lantern release and to the free event in the city the next day. So we can give you a great idea of what to expect on both events.

Read further if you want to learn more about the festival. Where to go, where to stay, what to expect. But also what the downside is of the event and what you can do instead to be more eco-friendly.

The traditions from which Yi Peng and Loy Krathong festival was originated, comes from the religion of Buddhists in Northern Thailand. They have been releasing the rice paper lanterns since the 13th century. Nowadays the Lantern festival is mainly a tourist event and attracts thousands of visitors each year to Chiang Mai.

But what is the purpose of releasing lanterns?

It is a ‘spiritual’ way to release all the fears, negative feelings and suffering that lay within. While releasing the lantern, you are spiritually letting go of everything that has been weighing you down and you can make a wish for the new year. The Krathong, a floating lantern, is also to pay respect to the river spirits and Phra Mae Khongkha, the Goddess of Water. 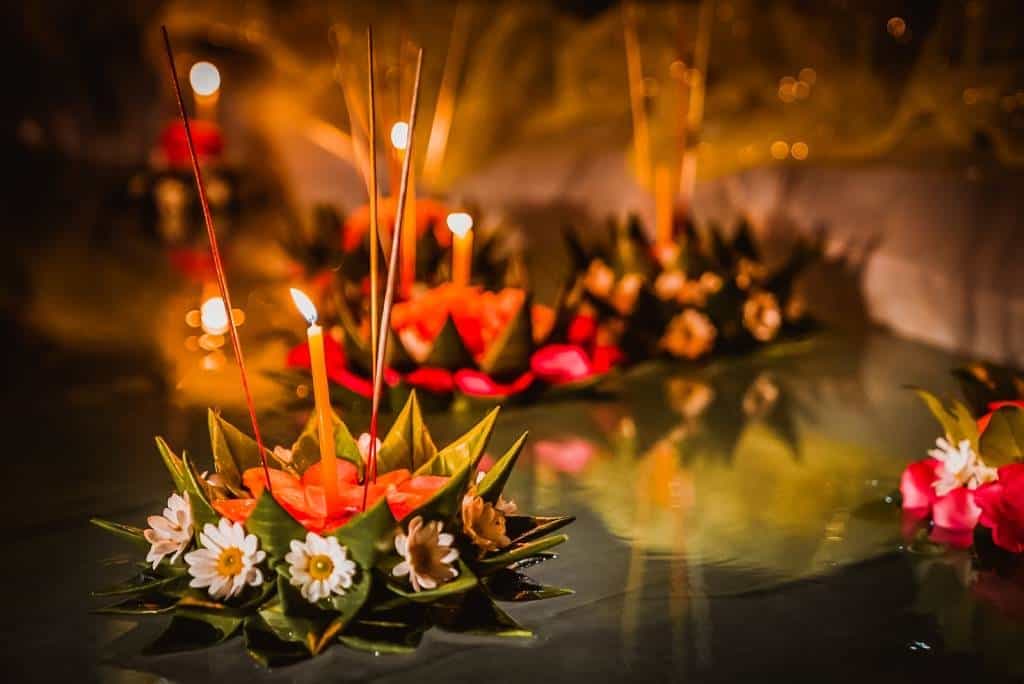 There are age-old traditions that people nowadays see how environmentally polluting they are. Fireworks, Christmas trees, diamond rings and burials are some examples. Learn more about the impact of these traditions and what you can do instead here.

Sky lanterns are also one of the most environmental polluting traditions. Despite that the lanterns are made of rice paper, there is a metal ring what the form holds once the lantern is lit. Although the rice paper is degradable, the wire-frame isn’t. However, the next day after the lanterns have been released, there is a big clean up in the city and surroundings. But it isn’t realistic to think that all lanterns can be found and cleaned up. Some parts of the sky lanterns can take over a year to completely decompose, making them anything but eco-friendly. And as we know with the problems caused by plastic trash, anything that sits on land for an extended period poses an immediate threat to wildlife and the environment.

What can you do instead to be more eco-friendly?

Traditionally, the Krathongs are made from biodegradable materials such as banana leaf. But modern rafts are often made of plastics and styrofoam, causing serious pollution in the waterways. What you can do instead is ensure your float is environmentally friendly. There are many options for this by using flowers as an offer. Or a Krathong baked out of bread which can dissolve in the water and be eaten by fish.

In our opinion it is important to be aware of the impact on the environment. Decide for yourself if you want to take part in the event.

Another option is that you’re only the visitor or photographer who captures the magic of the lanterns. With this paragraph, I only want to make you aware of the environmental consequence of the Lantern Festival. And also provide a more eco-friendly solution if you want to take part in the event.

What to expect at the Chiang Mai Lantern festival

The center of Chiang Mai is completely decorated with lanterns during the festival which gives a very enchanting feeling. Especially at night when they are all lit in different colors. Have a look at the colorful lanterns being hung opposite at the Three Kings monument and at many of the city temples. Below you will find the best places to go for Yi Peng and Loy Krathong.

Where to go for Yi Peng festival

The main area where everything happens in the center of Chiang Mai is at Nawarat bridge. Here you can freely release your lantern which you can buy for 100 baht at street vendors. You can also go to temples in the city center and release your lantern with the help of monks. The temple we would recommend to go to is close to Nawarat bridge and is called Wat Buppharam. Take into account to dress in polite clothing.

There are also options to go to the paid events where you will see the mass lantern release. The mass release takes place at Mae Jo University, Cowboy Army Riding Club and Doi Saket. Read more about the paid lantern events in the next paragraph.

Where to go for Loh Krathong festival

Basically, you can release your floating lantern everywhere into the river. But again, the main area where you can buy the Krathong and where “all the magic happens” is at Nawarat bridge. 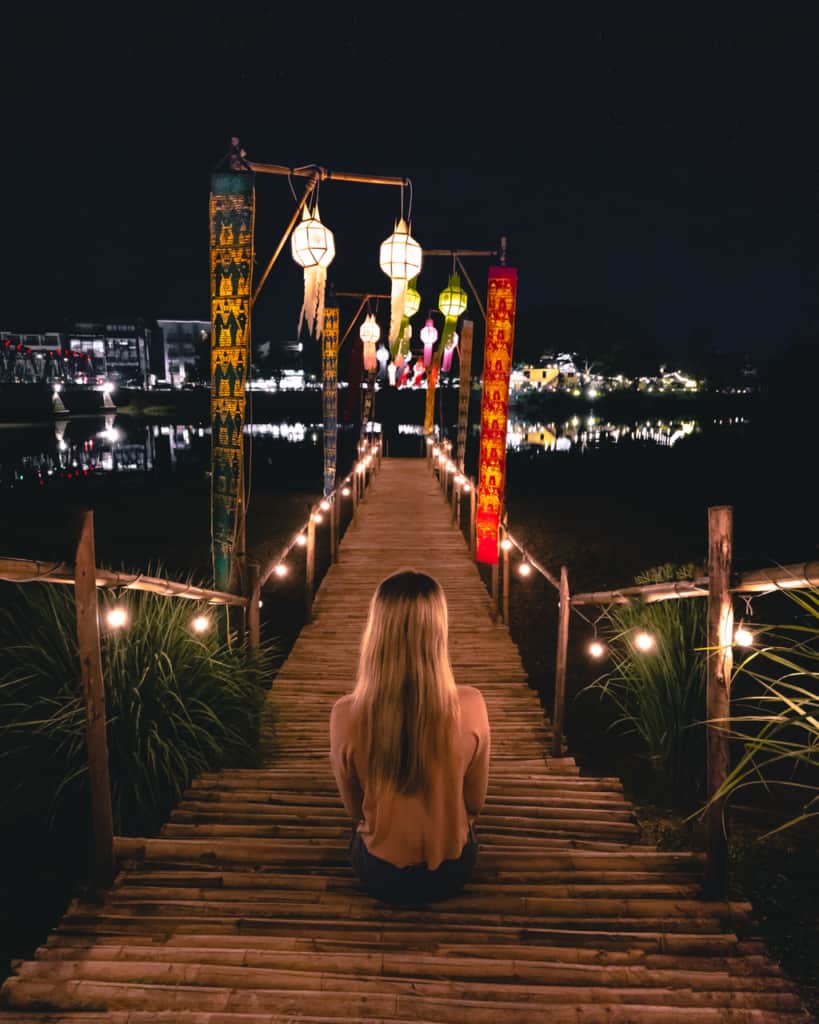 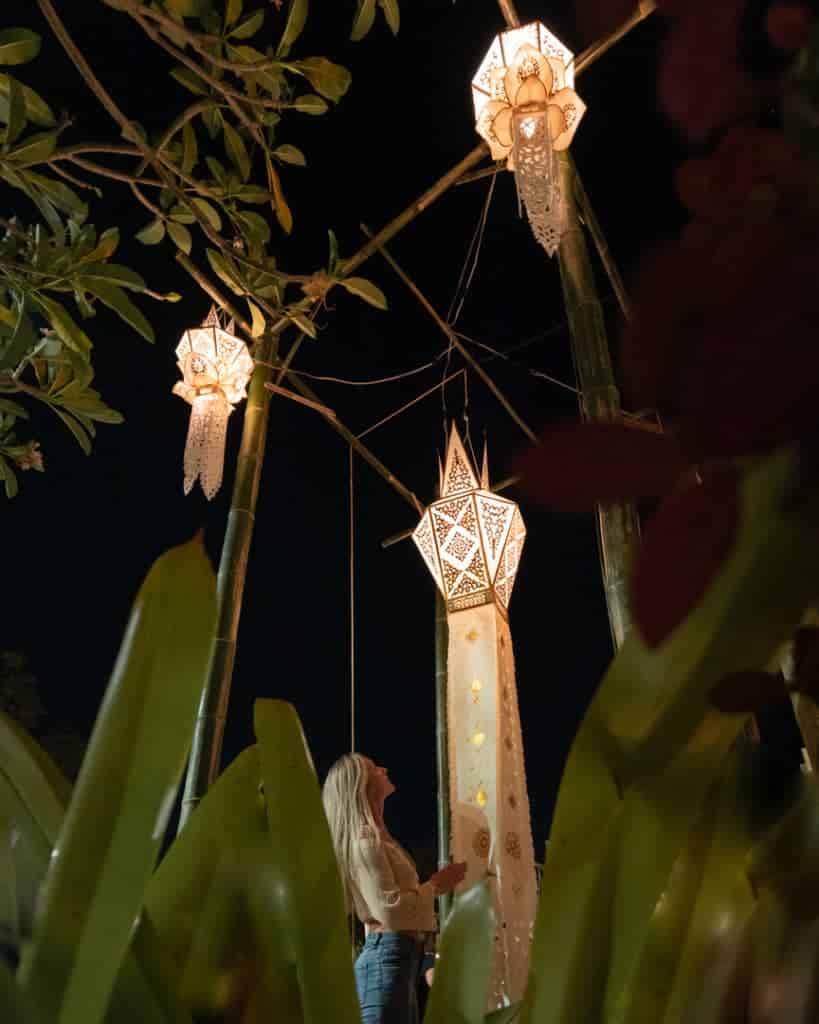 As said in the introduction of this blog post, the paid events outside the city are the organized mass releases. The public events in the city center of Chiang Mai have free entrance, but the lantern release isn’t organized. The ultimate photographer’s dream is the perfect moment when thousands of lanterns are being released to the sky at the same time. But be aware that this event costs around 100-400 dollars to participate in. It typically includes a 4-hour program with group prayers, a monk procession, and of course the lantern launch. There are a few locations where you can go to for the mass release which you can find here.

As the climax of Yi Peng approaches at these paid events, fireworks light up the sky with increasing intensity. That moment is absolutely magical and a treat for the eye and camera. Can you imagine, thousands of lanterns lighting up the sky in combination with fireworks. An event so intense, that air traffic controllers even restrict access to the airspace around Chiang Mai during this event! 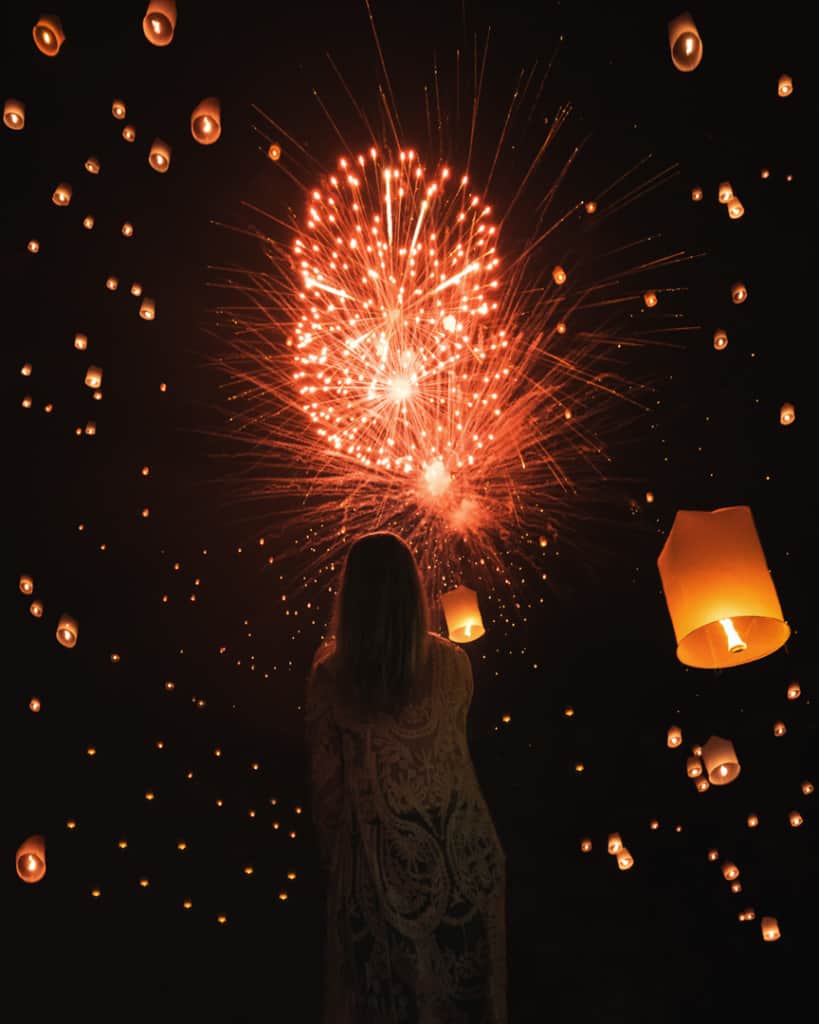 The paid lantern festival for free?!

Another option is to travel to one of the locations where the mass release is being held and watch it from outside the event area. Last year in 2018, we were invited by a filmmaker to go to the paid event to make behind the scenes shots of his Chiang Mai film. One day we were at the paid event, and the other day we were in the city at the free event. At the paid event we saw tourists spread their rug, setting down their tripods and camera to capture some moments of the mass release. This is a smart option if you want to see the mass release, but don’t want to pay that much money to attend the event itself.

If you don’t want to pay money for the mass release event, there are plenty of options to watch the lanterns being released in the center of Chiang Mai. But take into account that these releases are not scheduled. So you won’t see the effect of thousands of lanterns filling the sky at the same time, as you will see on many pictures when you google the Chiang Mai Lantern Festival. 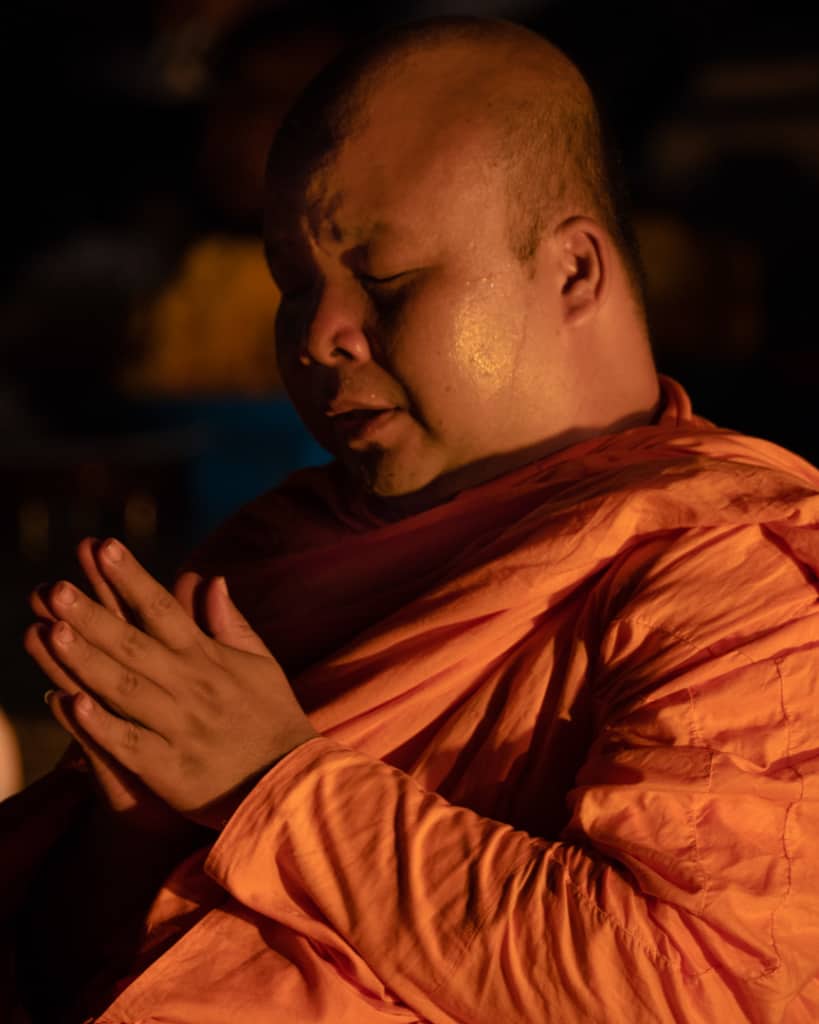 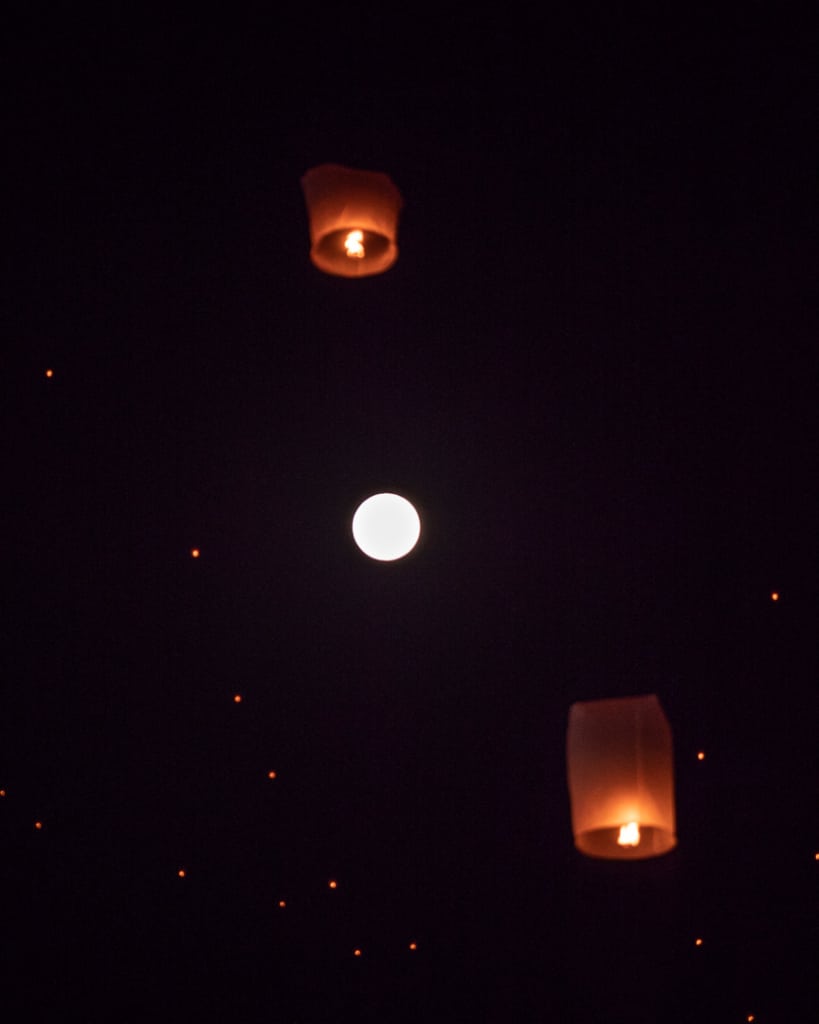 The exact dates of the Chiang Mai Yi Peng festival change from year to year according to the full moon of the second month of the Lanna lunar calendar. Usually, this means the event takes place between late October and November. The date is typically released only a month or so prior, so be flexible in your travel plans when you’re planning to attend the Yi Peng and Loy Krathong festival in 2020! In 2019, the lantern festival in Chiang Mai 2019 takes place from 11 – 13 November.

What to keep in mind during the Lantern festival

As a participant of the Lantern Festival, you should keep a few things in mind. 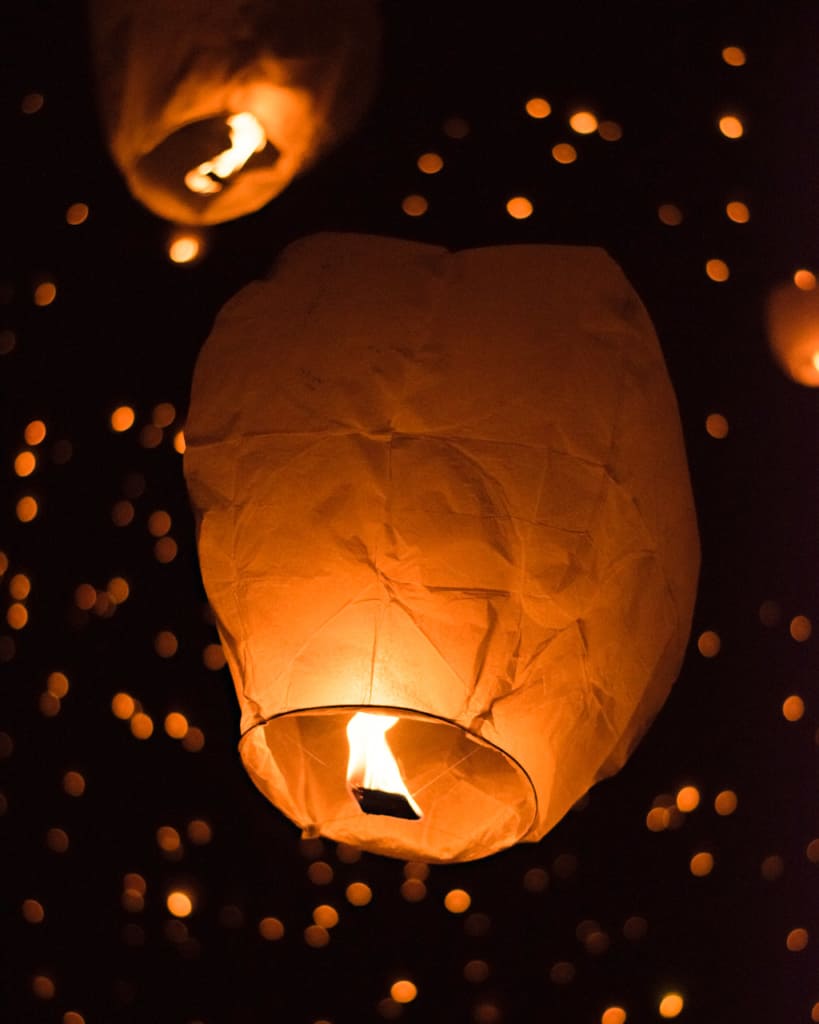 If you want to read more about the best things to do in Chiang Mai, read this blog post:

Best things to do in Chiang Mai