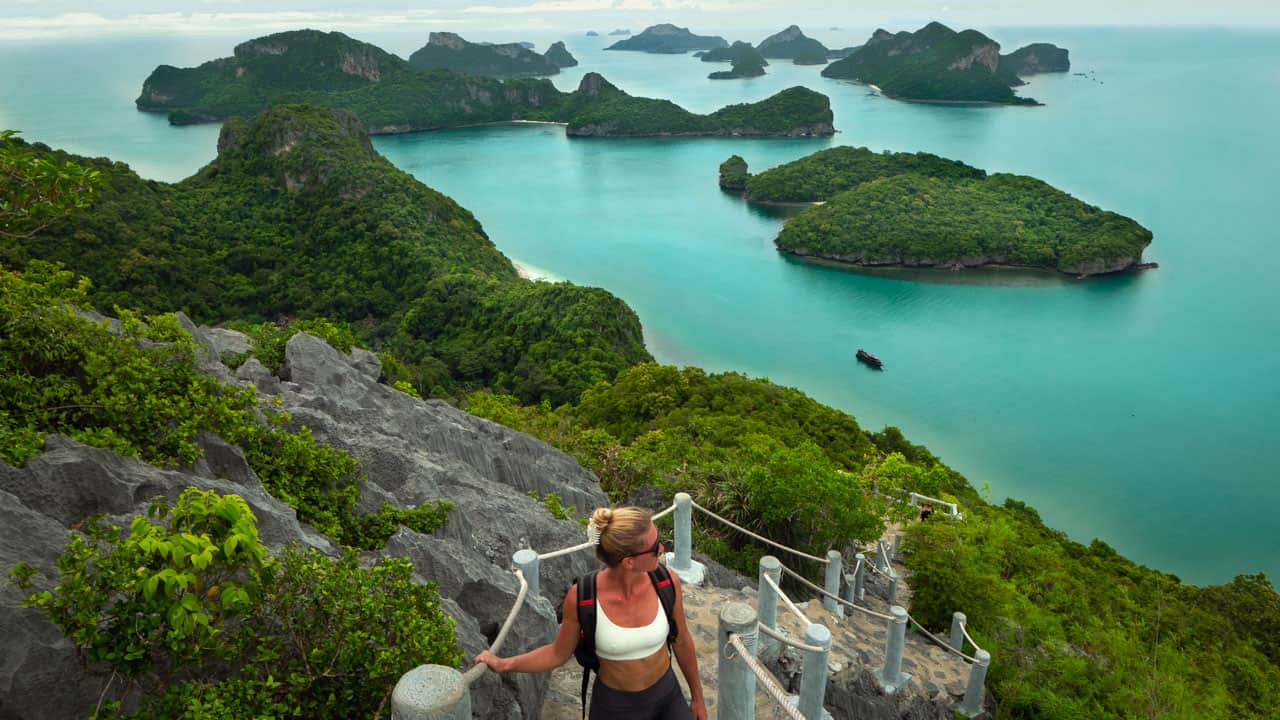 The Ang Thong National Marine Park is a beautiful archipelago consisting of 42 islands scattered in the Gulf of Thailand. Just off the coast of Koh Phangan and Koh Samui in the Surat Thani province is this slightly unknown but beautiful Thai National Park located. You can visit the Ang Thong Marine Park with several different day tours from both Koh Samui and Koh Phangan. These day tours to Ang Thong include snorkeling and kayaking is optional. The hike to the most epic viewpoint of the Ang Thong National Marine Park is also a must do but involves some effort to get there. With impressive towering limestone islands, lush rain forest, crystal clear emerald waters and some of the most beautiful viewpoints in Thailand, the Ang Thong Marine Park tour is an adventure packed trip which you can’t miss! Here you’ll find all the information you need with tips on what to prepare and what to expect.

What to expect during the Ang Thong National Marine Park tour

What is the best Ang Thong National Marine Park tour?

From both Koh Samui and Koh Phangan are several tour operators offering day Tours to the Ang Thong Marine Park. It depends what you prefer which is the best Angthong Marine Park tour for you. You can choose for a completely organised tour on a bigger but slower boat, such as Orion from Koh Phangan. But if you’re with a bigger group, about 7 – 10 persons, you can also arrange a private speed boat trip to the Angthong Marine Park from either Samui and Phangan. Make clear before booking with your agent which activities are included and which not.

Mostly the entrance fee of 300 Baht for the Angthong National Park is not included and must be payed upon entering the National Park.

The prices for the different tours vary, so if you’re on a tight budget it’s worth it to check out the cheapest opions. We had to go with Orion from Koh Phangan, but that was more because there weren’t other tours going around that time because it was mid Corona time (July 2020).

The Orion tour was perfectly organised, and although we didn’t really fancy the loud group which was on the boat as well, we surely had a great time exploring the Ang Thong Marine National Park. The price was 1900 Baht including kayaking and excluding the 300 Baht entrance fee for the Ang Thong National Park. 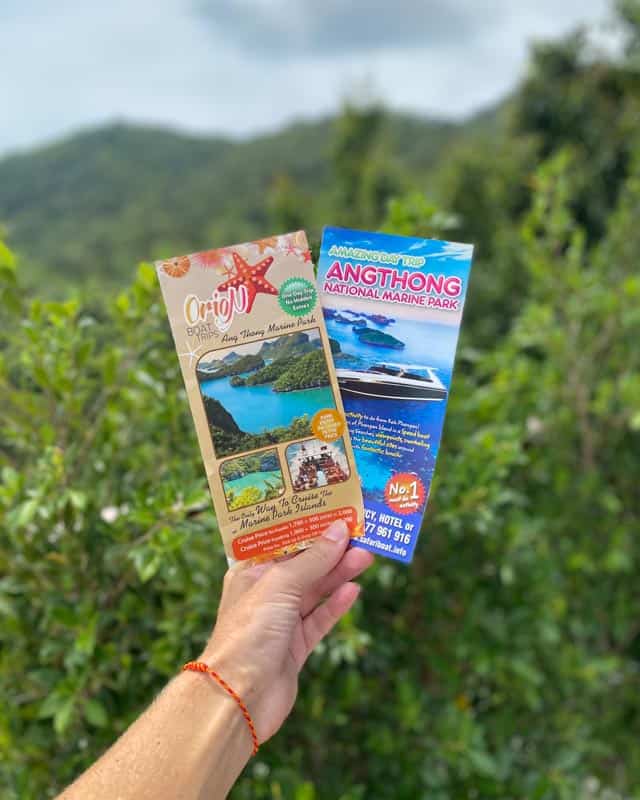 From the pier where the boat is docked you will depart to Angthong National Marine Park. It takes about 2 hours one way with Orion from Koh Phangan to get to the park. So you’ll have plenty of time to take in the beautiful views of the Gulf of Thailand. Meanwhile there’s a simple breakfast if you’re hungry. With the Orion tour is a little breakfast is included, so I’m not sure if this is included in other tours as well. 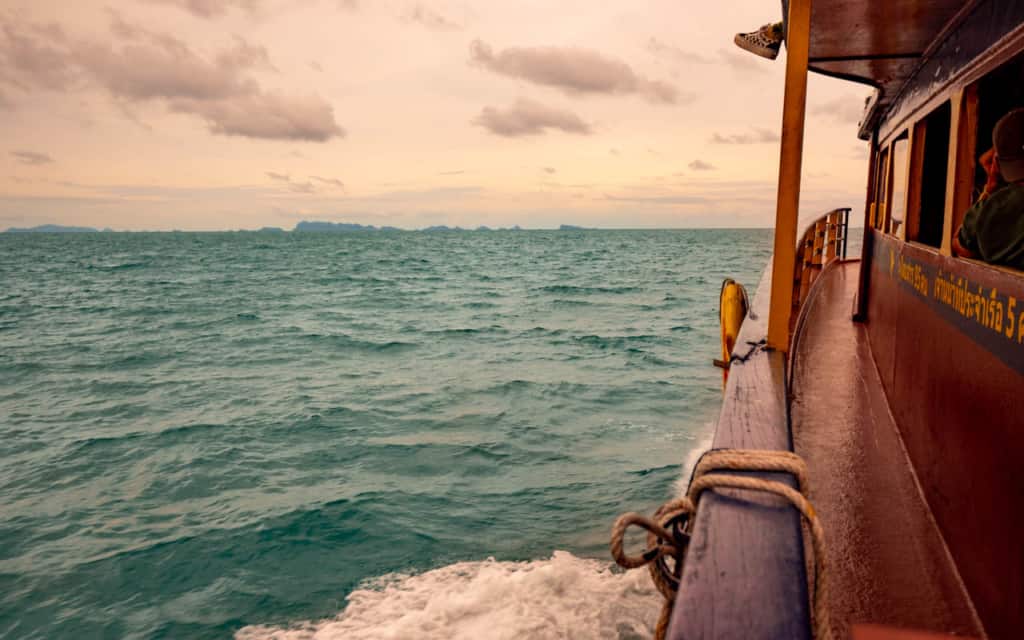 The first stop is at Koh Wao where you can go snorkeling. The Orion boat features a glide and jumping platform which resulted in some epic backflips and jumps in the water. 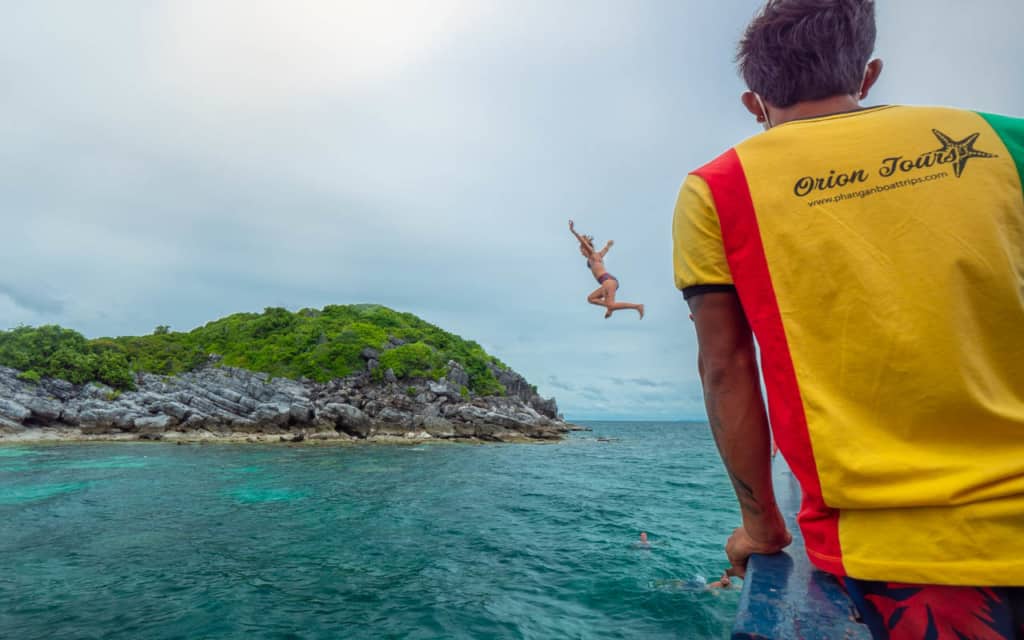 Snorkel gear like masks and fins were provided by Orion, and we saw they cleaned it well with soap before giving them out. Besides some coral, small tropical fishes and sea urchins there wasn’t much else exciting to see during snorkeling. The jumps from the boat into the sea were maybe even more fun than the snorkeling activity itself.

After snorkeling we got lunch offered which was a combination of rice, vegetables and fried chicken. Meanwhile we sailed towards the next stop which was the island where the kayaks were docked. 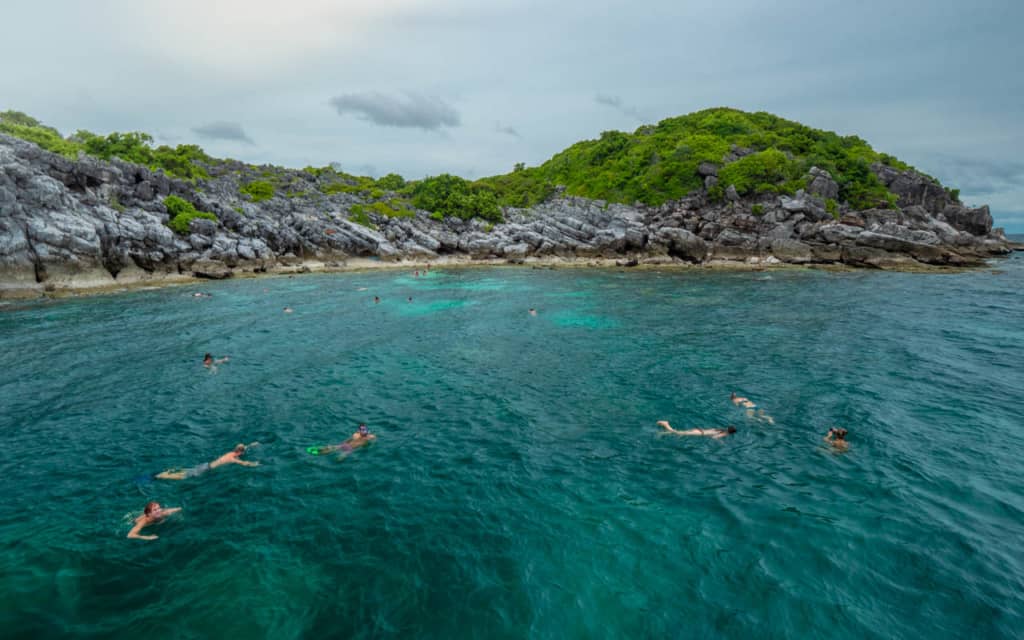 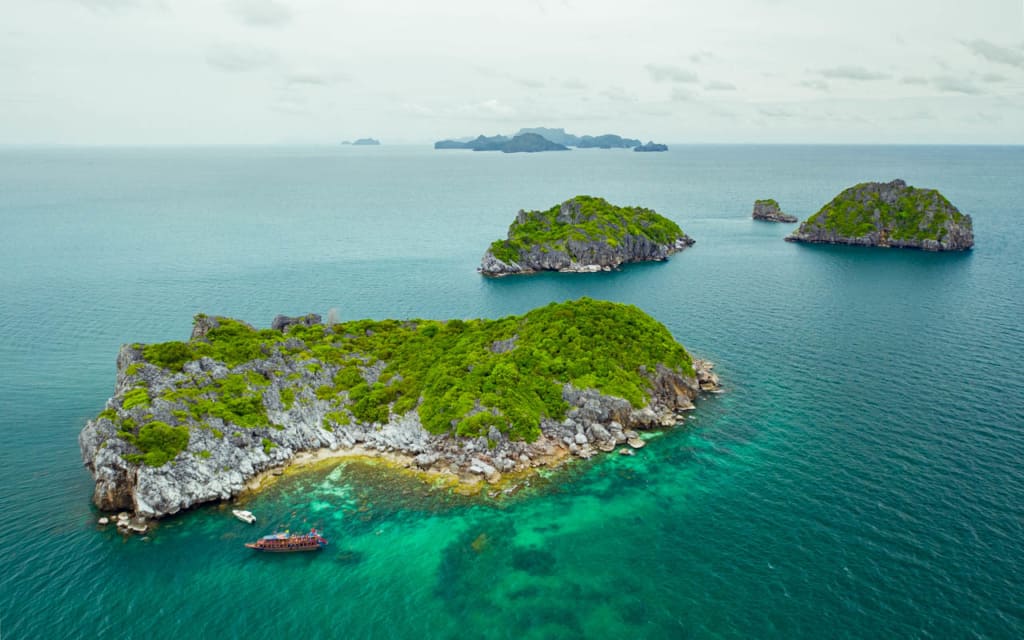 The second stop and activity is kayaking. Because the Orion boat is too big to dock close to the shore, we needed to transfer to a smaller long tail boat which dropped us off at the pier of the island. All the kayaks were ready to use. So once we had our lifejackets on we hopped in the kayak we were on our way to peddle to Koh Mae Ko. We kayaked along the coastline of several islands with towering limestone cliffs, explored a small cave area and arrived after about 30 minutes kayaking the beautiful Koh Mae Ko.

On this island is a decent toilet and a fridge where you can buy cool drinks. 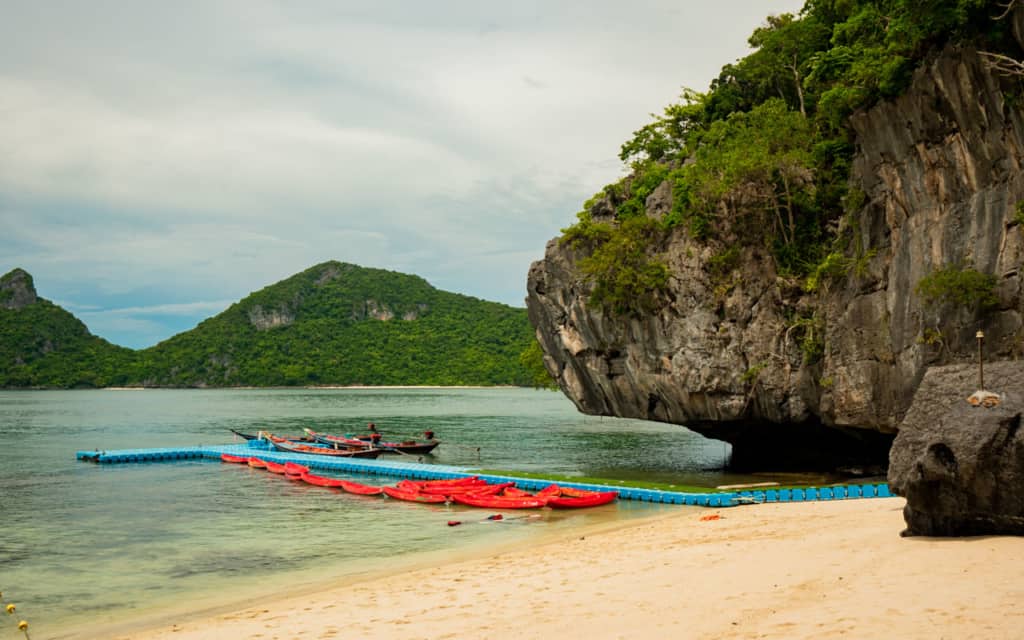 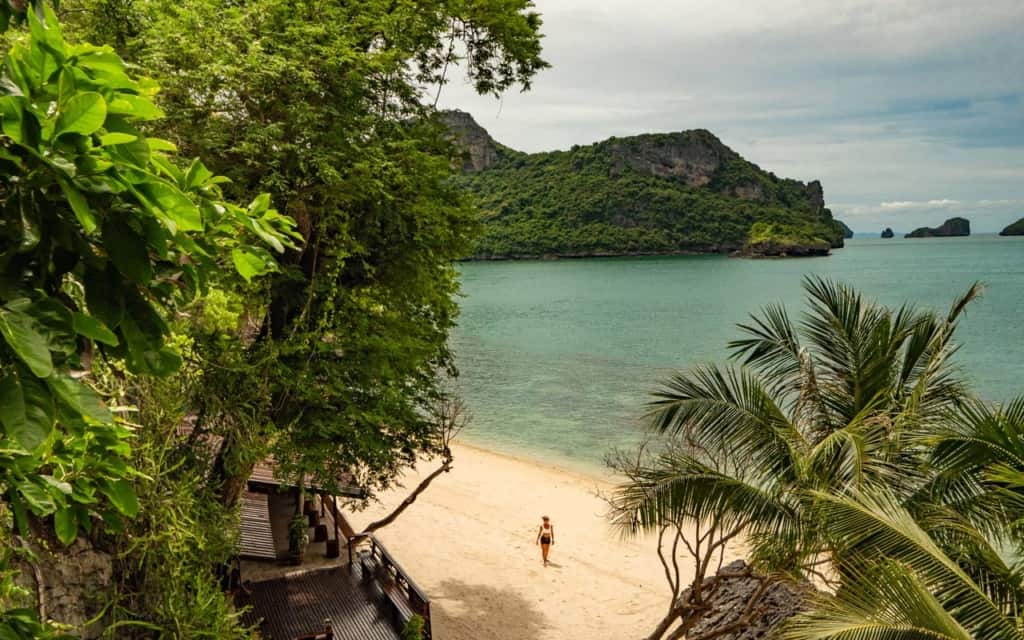 Hiking to the Emerald Lake viewpoint on Koh Mae Ko

After kayaking it was time for the third activity of the day. Hiking to the beautiful Emerald Lake! This hidden emerald lagoon is tucked away on the island and a wonderful nature phenomenon. Despite the stairs are steep, it’s only a 10 – 15 minute hike up to the viewpoint. You can walk down to a lower viewpoint of the lake as well if you’re into it. We loved the higher perspective of the viewpoint and the serene and quiet surroundings before the big, loud group arrived again… 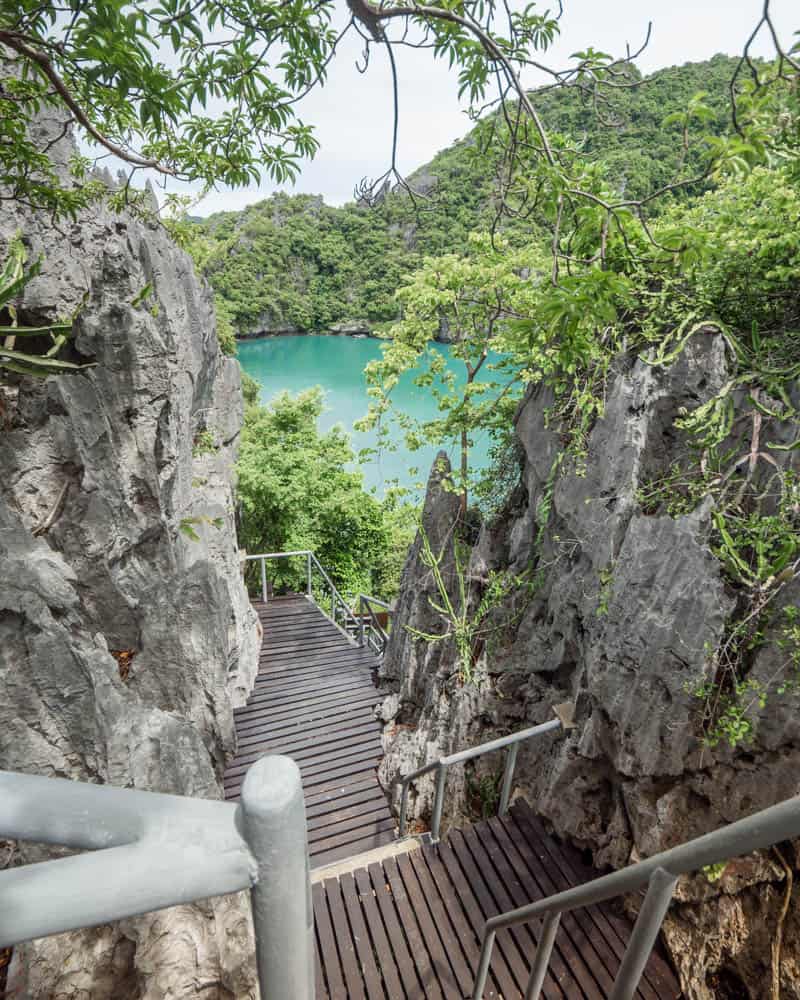 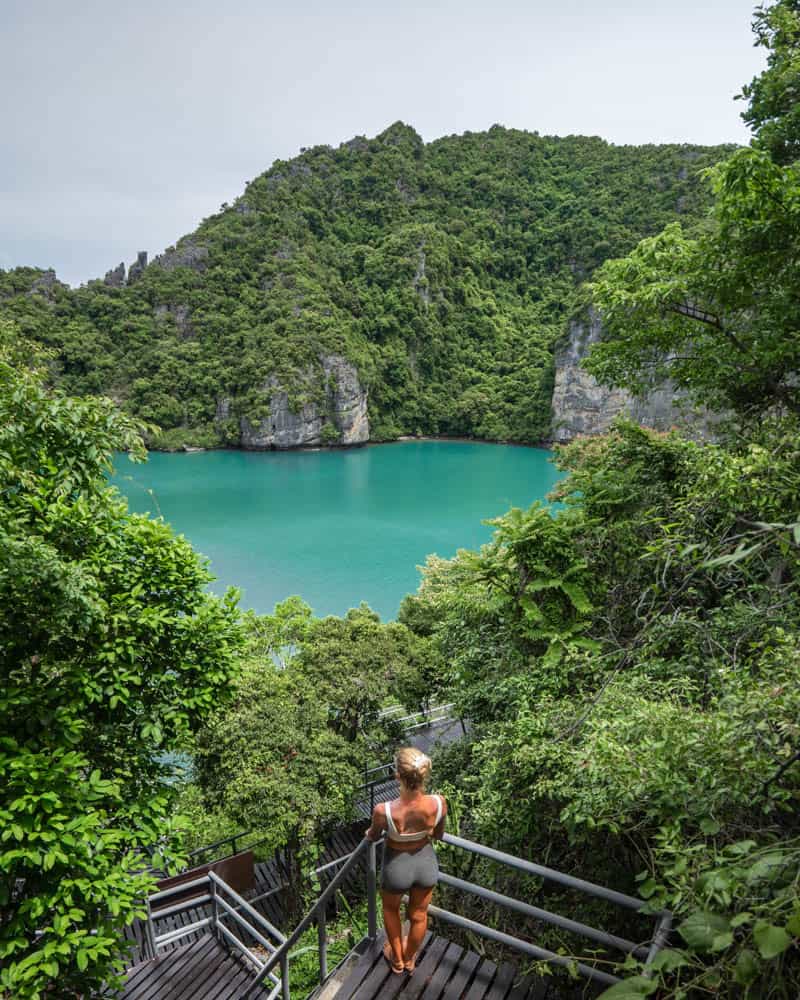 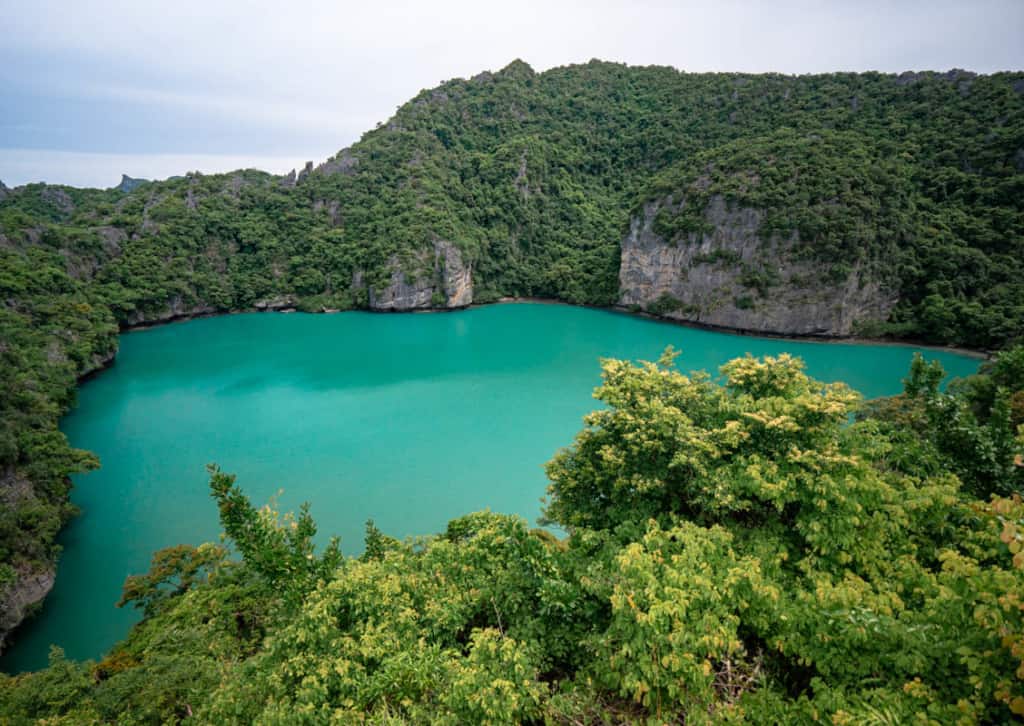 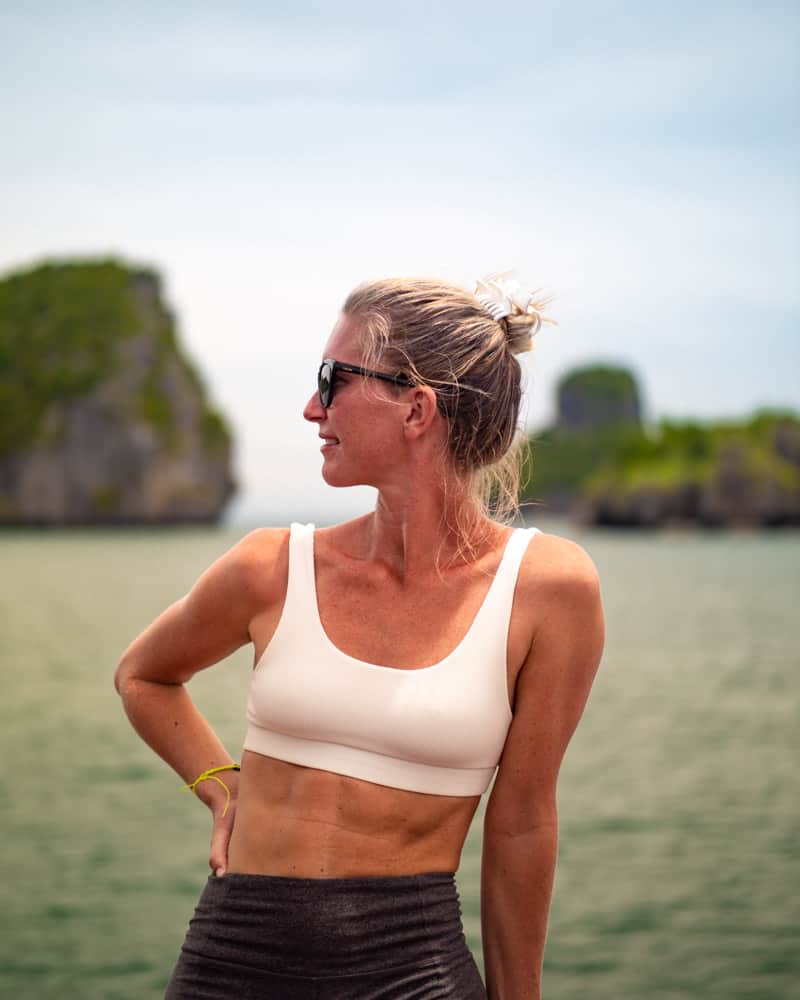 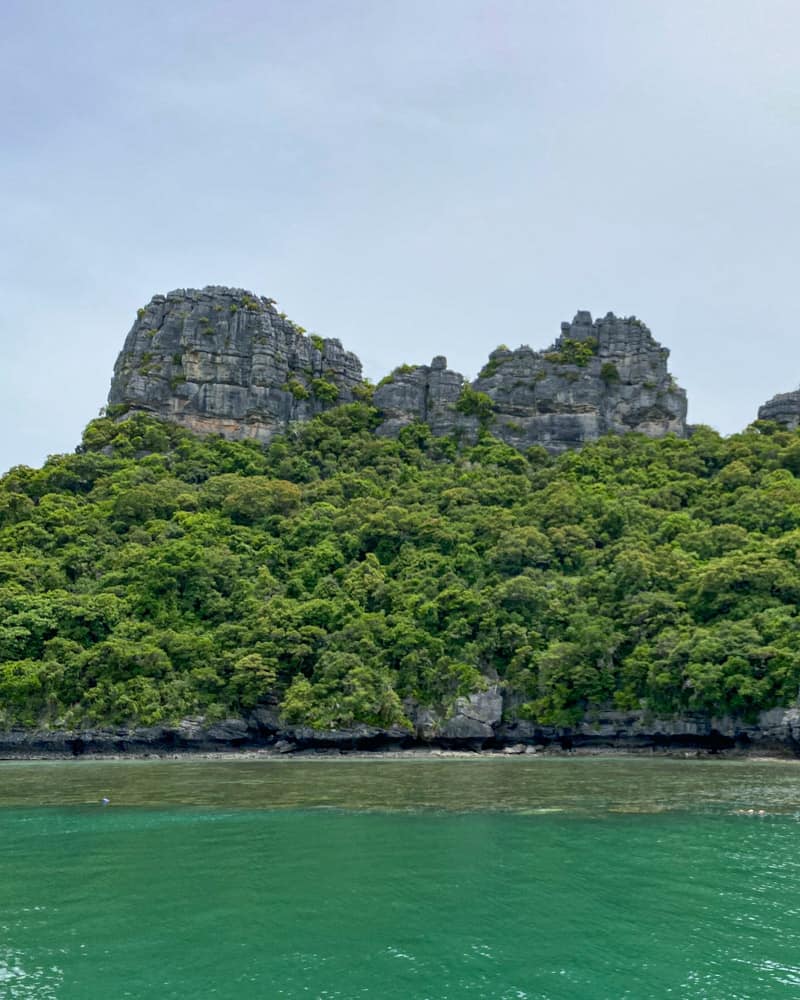 Hike to the viewpoint on Ko Wua Ta Lap

The last activity of the day is also the most strenuous activity of the day. On the main island of the Angthong park you will hike towards the summit. This amazing viewpoint looks out over the 42 little islands that are scattered in the sea and make up the Ang Thong Marine Park. The hike itself it not the longest, you can do it in 30 minutes or even faster depending on your speed. But it’s all man made stairs of rocks and concrete. So you’re constantly walking uphill which is exhausting, especially with the heat and humidity. But even if you have to crawl the last meters… keep going because it’s super worth it!

Along the way you might even have the luck to spot the unique dusky leaf monkey. Maybe even with a little orange baby monkey! We could capture this unique species thanks to visiting Ang Thong Marine Park right after the lockdown in Thailand due to the Corona virus. So nature in Ang Thong had the time to recover and animals returned to spots which were before too busy because of all the tourists visiting. 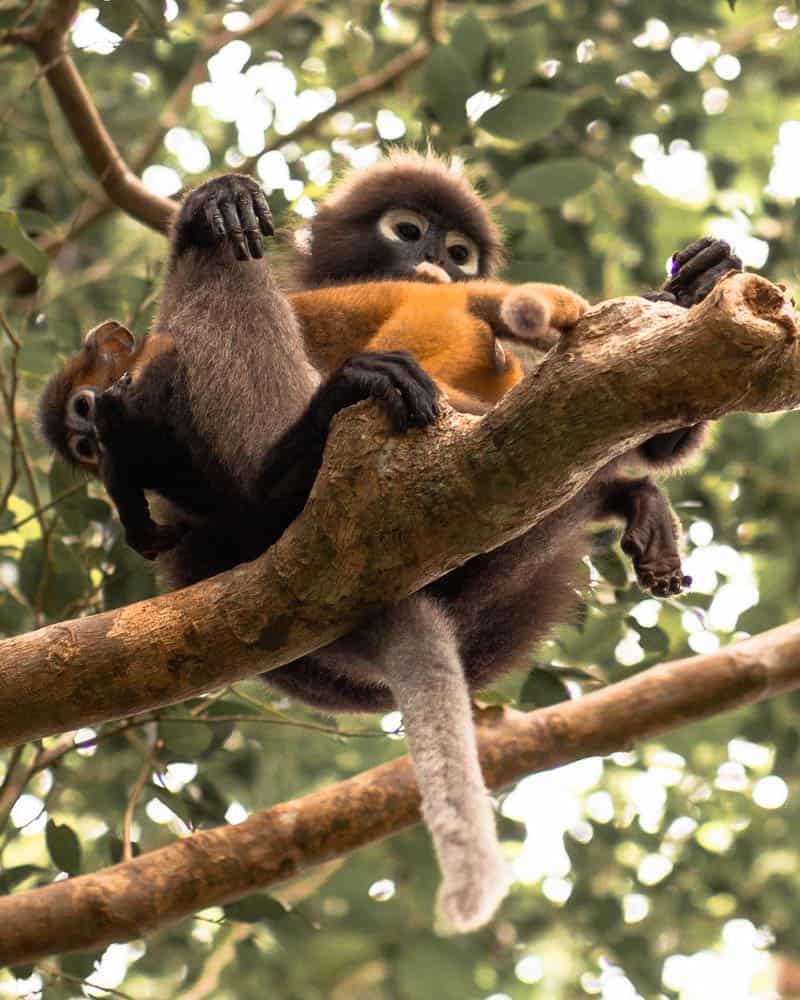 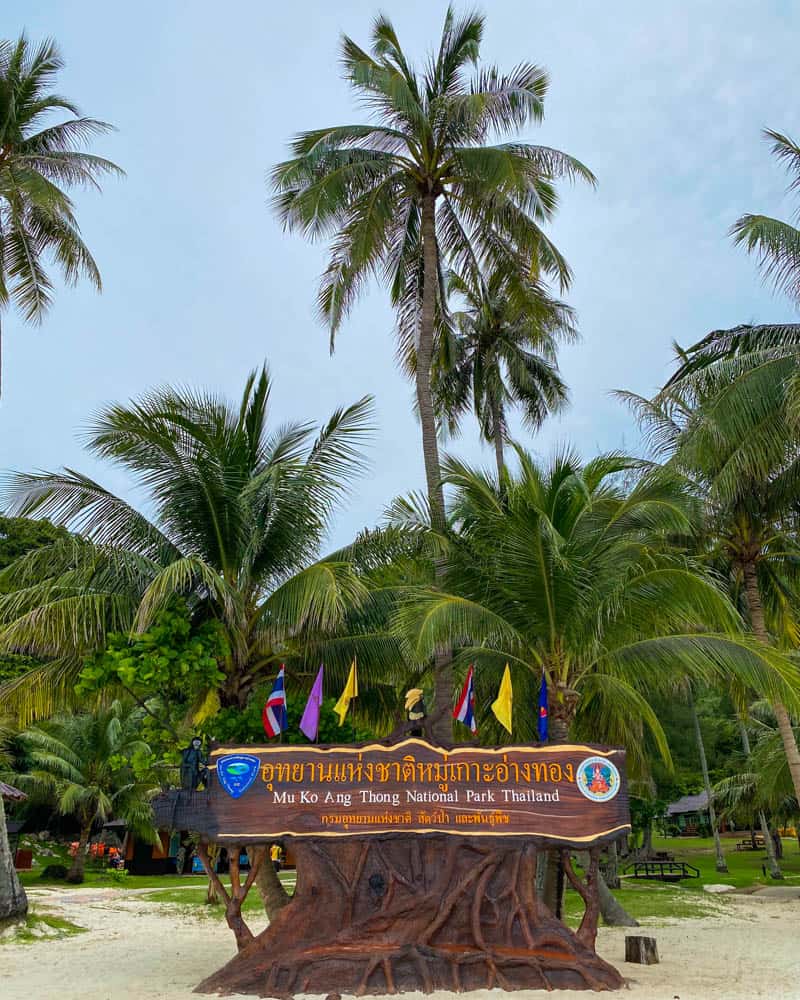 Make sure to depart well prepared for a day trip to the Angthong National Marine Park. Despite the fact that a lot is arranged for you during the tour, you still need to bring some items you’ll need during a day on the water. So here a short checklist for you to be well prepared.

We hope you enjoyed this guide about the Ang Thong Marine Park tour. If you have any questions, don’t hesitate to contact us!

For more Koh Phangan travel inspiration, head over to these blog posts:

Best things to do in Koh Phangan

Is your plan to travel to Koh Samui? Then read this blog for all the best things to do in Koh Samui

For Koh Tao travel tips, check out our Koh Tao best things to do