Sri Lanka has some amazing waterfalls to explore, to be precisely more than 400 on the entire island! Most of them can be found in the hilly inlands of Sri Lanka, especially in-between the Kandy and Nuwara Eliya district. When we spend a few days in Nuwara Eliya, we had to explore some of the most impressive waterfalls in the area. One of them is, without a doubt, the Aberdeen Falls! With it’s height of around 98 meter and lovely short trek through the jungle, this is a must see for waterfall and nature lovers! Aberdeen Falls was one of our favorite waterfalls in Sri Lanka to explore. In this blog post you will find all the information you need to know before you make your way to the Aberdeen Falls Sri Lanka.

How to get to Aberdeen Falls Sri Lanka

The best way to get to the Aberdeen Falls is with your own transport or a private driver. Take into account that the weather in Nuwara Eliya can be unpredictable. You are in the mountains, so temperatures and weather changes quickly. We found a very good option to rent a car from a local for $30 per day which gave us the opportunity to explore the whole area around Nuwara Eliya. And because we didn’t want to risk it to drive a motorbike and got soaked, this was the best option for us. Google Maps will lead you to the starting point of the waterfall. But make sure to drive all the way to the end of the street where Google Maps sends you. You will see a sign earlier along the road with the waterfall on it, but don’t go down this road!! You have to drive all the way to the end of this road until you see a parking area and local shack. 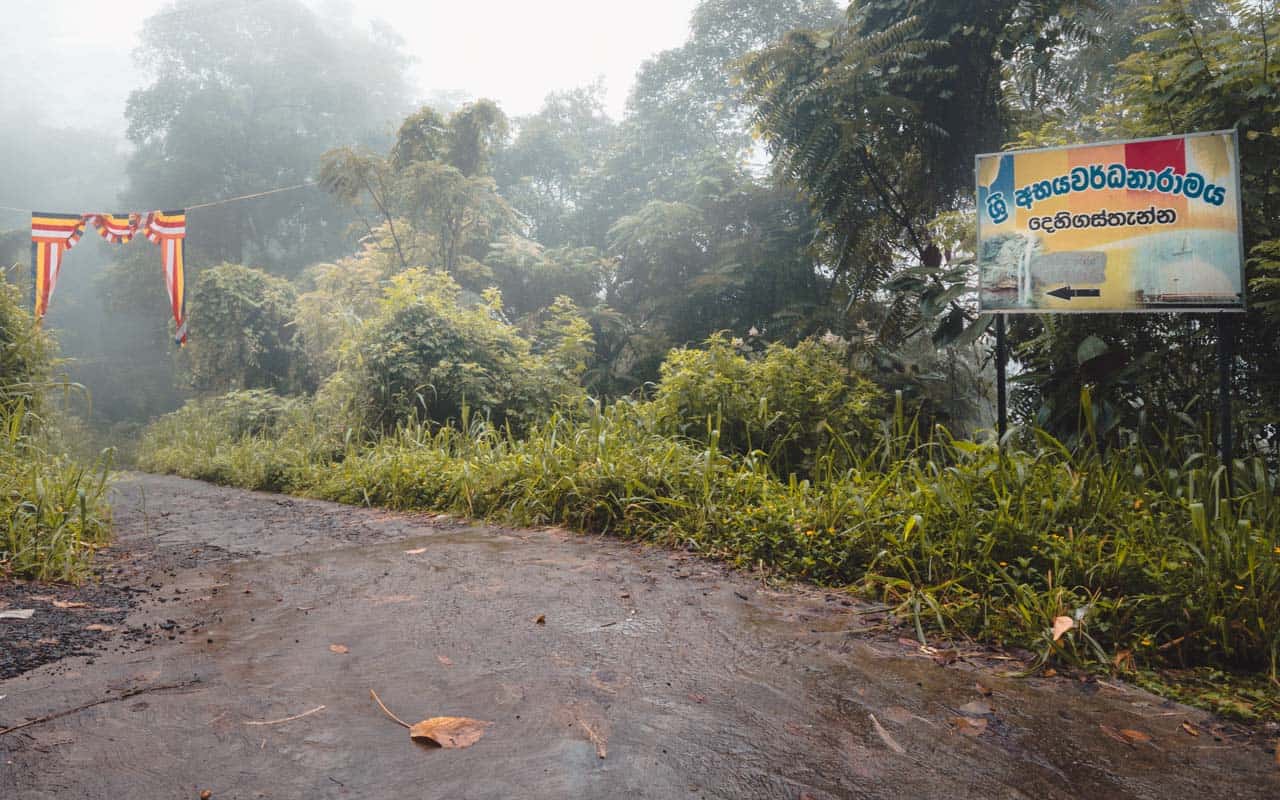 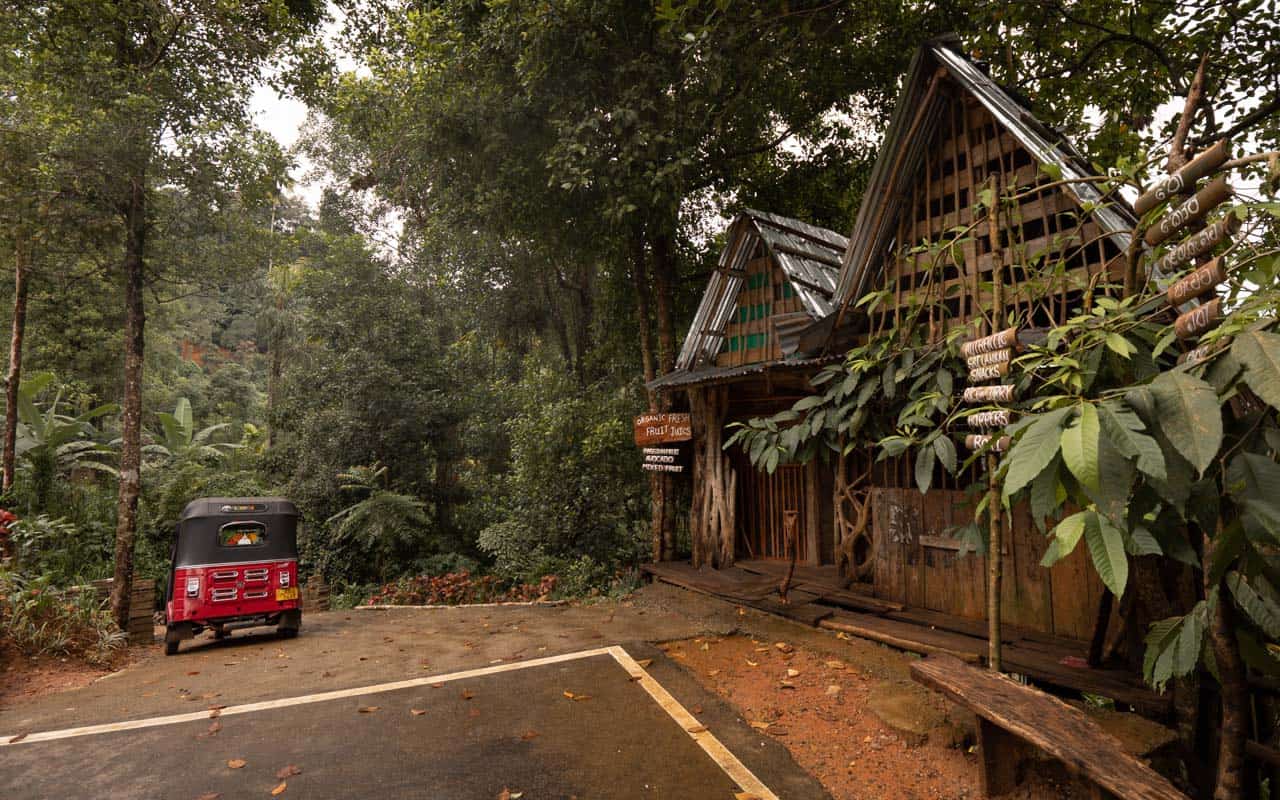 Also, on a clear day, you will see the Aberdeen Falls from the road. That is your sign that you’re almost at the starting point of the hike. 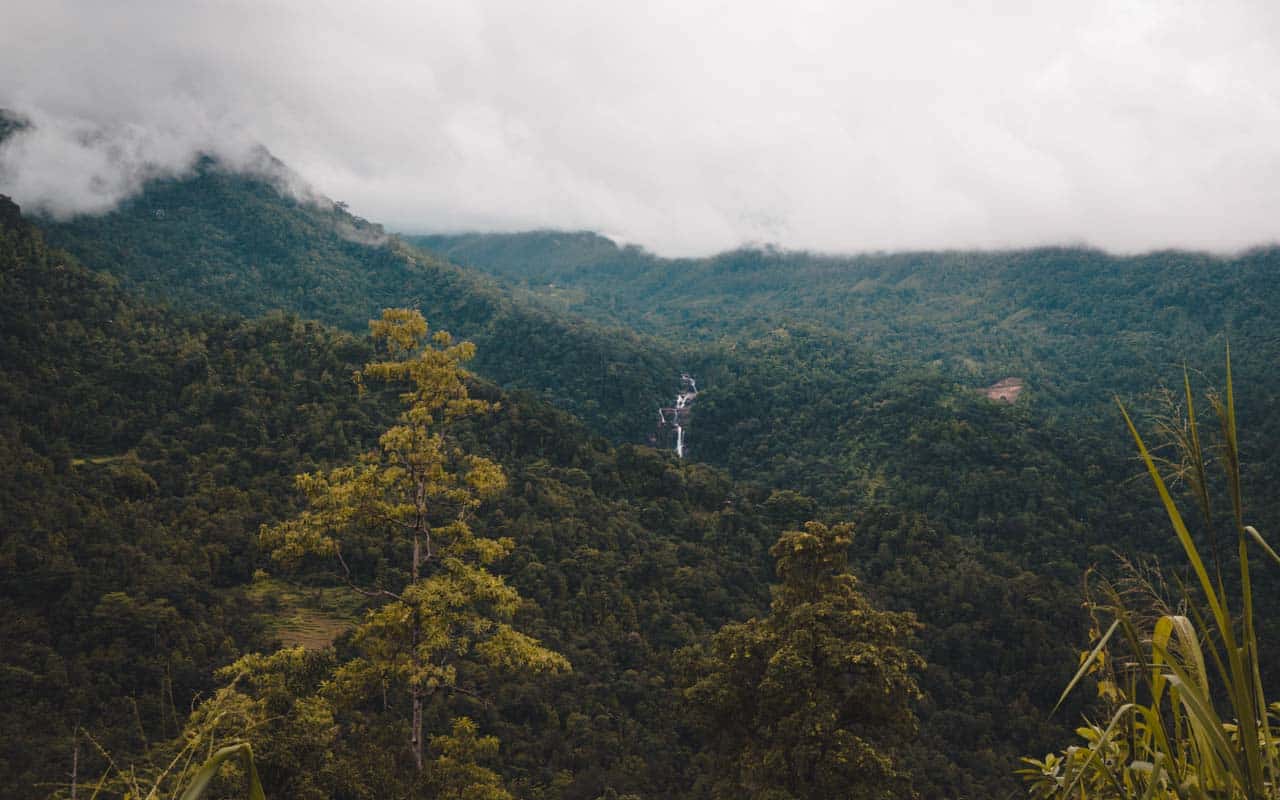 The view from the road on Aberdeen Falls

The hike to Aberdeen Falls

At the parking area you will see a local shack where you can buy a fruit juice or tea when you get back from exploring the waterfall. There is no entrance fee to get to the waterfall, so after you’ve parked your vehicle you can start your hike down to the Aberdeen Falls immediately. The path is pretty straight forward and is overall an easy hike for about 20 minutes. You will pass some local houses on your way to the Falls. 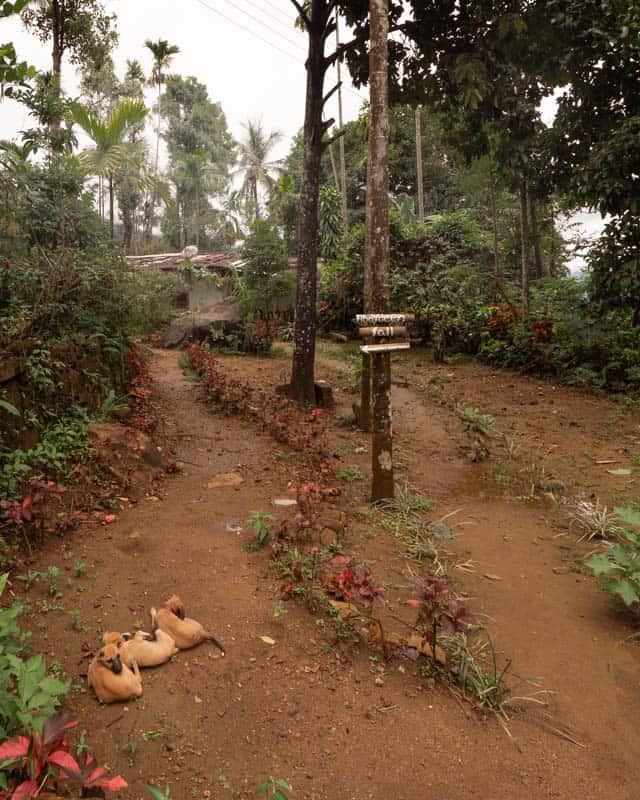 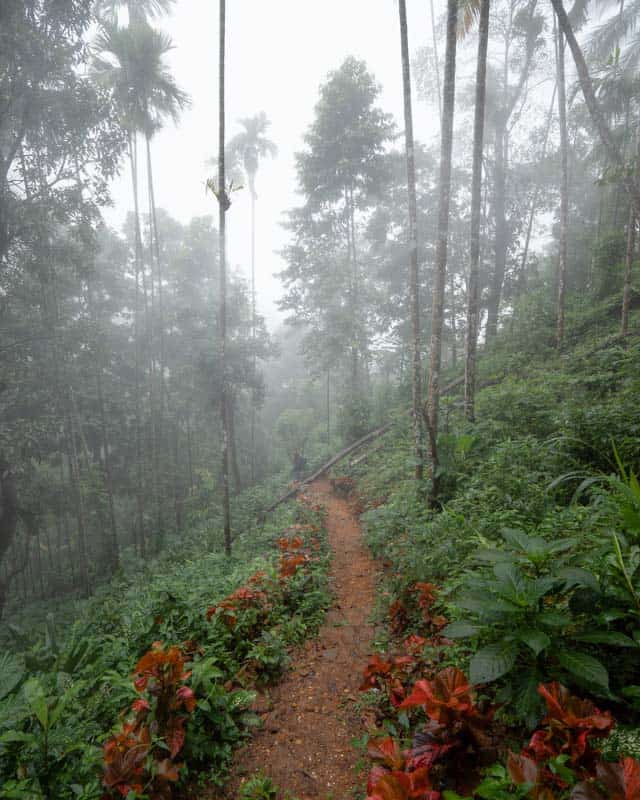 It’s absolutely not a good idea to do this hike on flips flops. For several reasons! There are lot’s of slippery rocks so you’ll need shoes with grip. And there are leeches in the area as well. Especially after a rainy day! We were wearing socks and long pants, but even then they found a way to get on our ankles and suck themselves full with blood! Read in the next paragraph what you need to do when you have a leech on your skin. 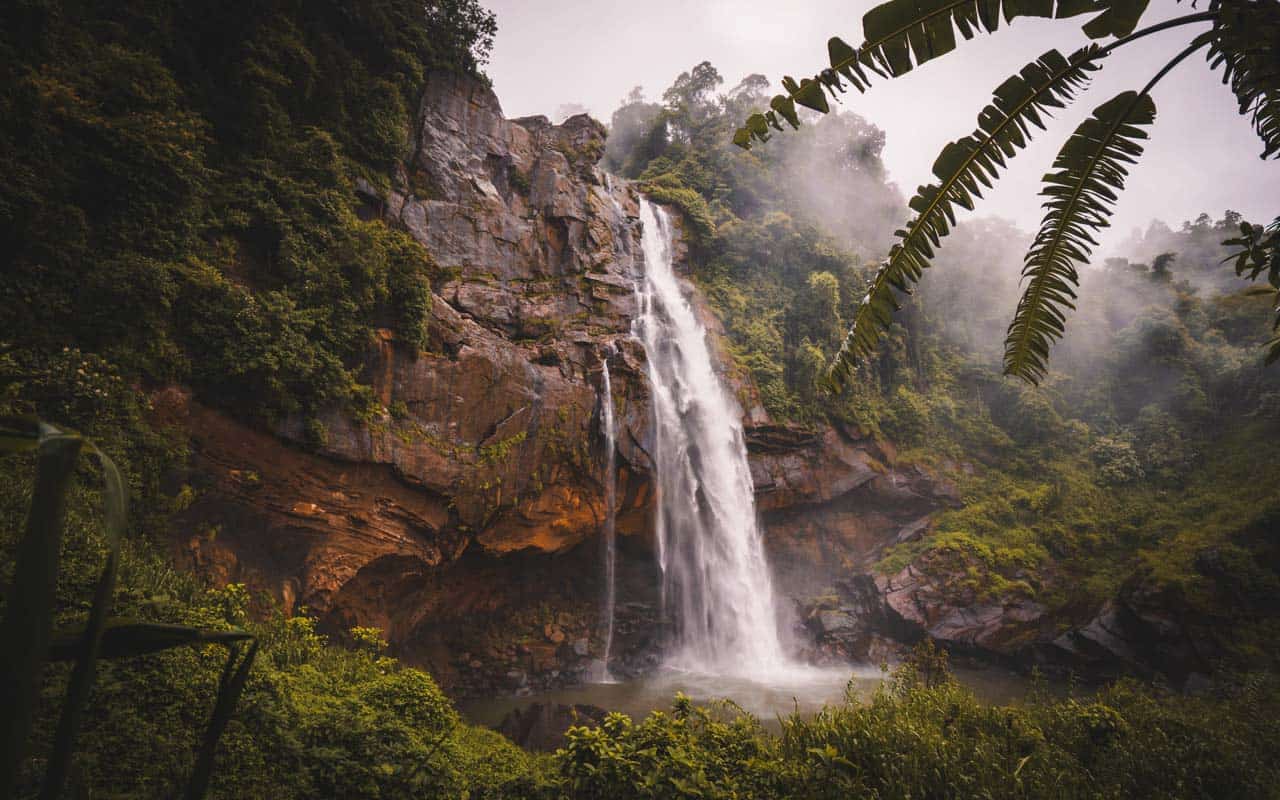 What to expect at the Aberdeen Falls Sri Lanka

Once arrived at the Aberdeen Falls, you will be amazed by the beauty and power of the waterfall. With it’s 98 meters high, Aberdeen Falls Sri Lanka is ranked as the 18th highest waterfall on the island.

It depends on the season how full of water and powerful the Aberdeen waterfall is. We went there in september and it was raining some hours a day. This resulted in a beautiful moody setting with a powerful waterfall.

I won’t recommend swimming or bathing in the plunge pool of the waterfall. The power with which the water comes down is enormous and the rocks might be slippery. Maybe it’s different in dry season when the waterfall has less power, just use your common sense before getting in the water here 🙂 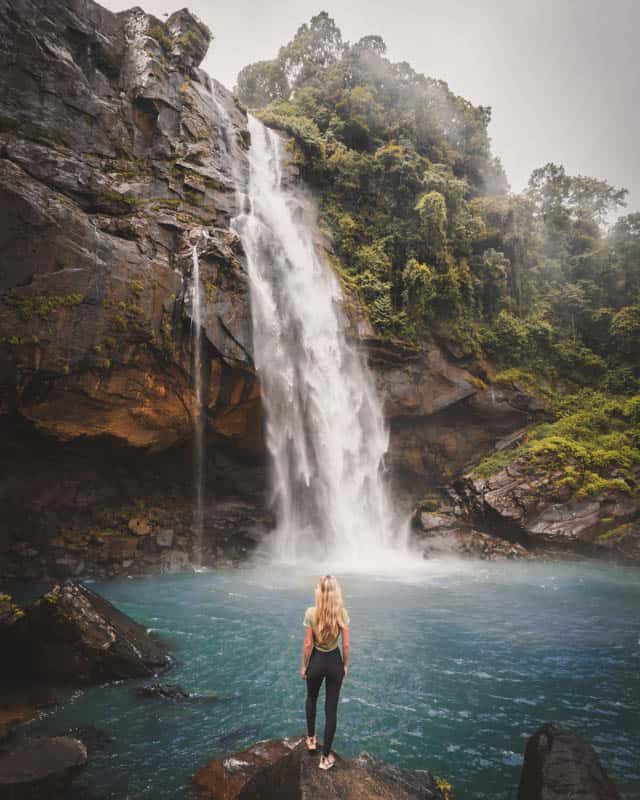 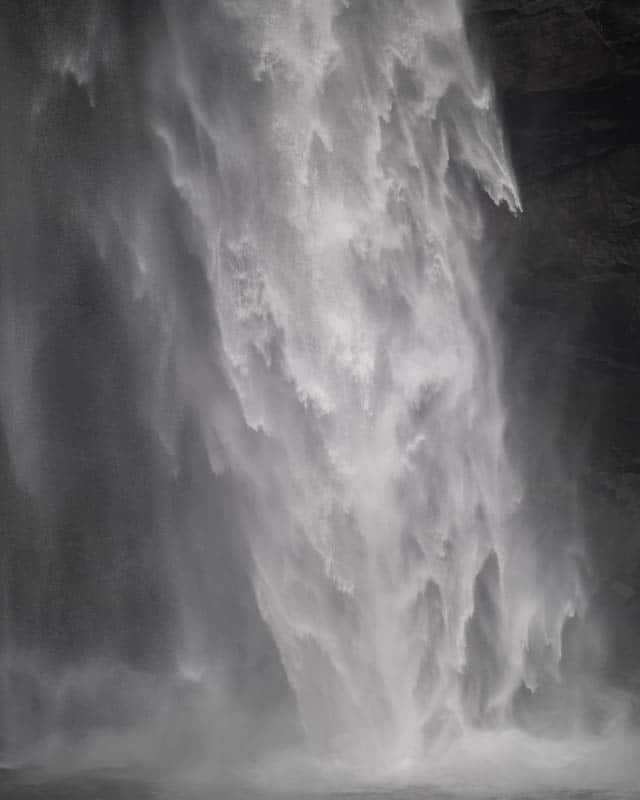 Leeches at the Aberdeen Falls

Keep in mind that there are lots of leeches in the Sri Lankan rainforest. Especially in places where it’s humid or when it has just been raining. You can prepare yourself to wear socks and a tight legging. But if you do find a leech attached to your skin, don’t pull it off, as the mouth parts can remain under your skin. Just remember that leeches aren’t poisonous and they don’t carry diseases, so don’t panic when you find one. Leeches are usually quite easy to remove and won’t cause any long-term harm. The best option to remove a leech is to use something flat, like a creditcard for example, and slide it under the leech to break the seal, at which point the leech will detach its tiny jaws. There are other options mentioned to remove a leech by Sri Lankan locals or on the internet. Like using salt, alcohol, DEET or lemon juice so the leech will fall off by itself. But this is not the best and safest option because the leech will detach itself quickly. Therefore it’s likely to leave some of the contents of its stomach into the wound in its haste. This might increase the risk of the wound becoming infected. 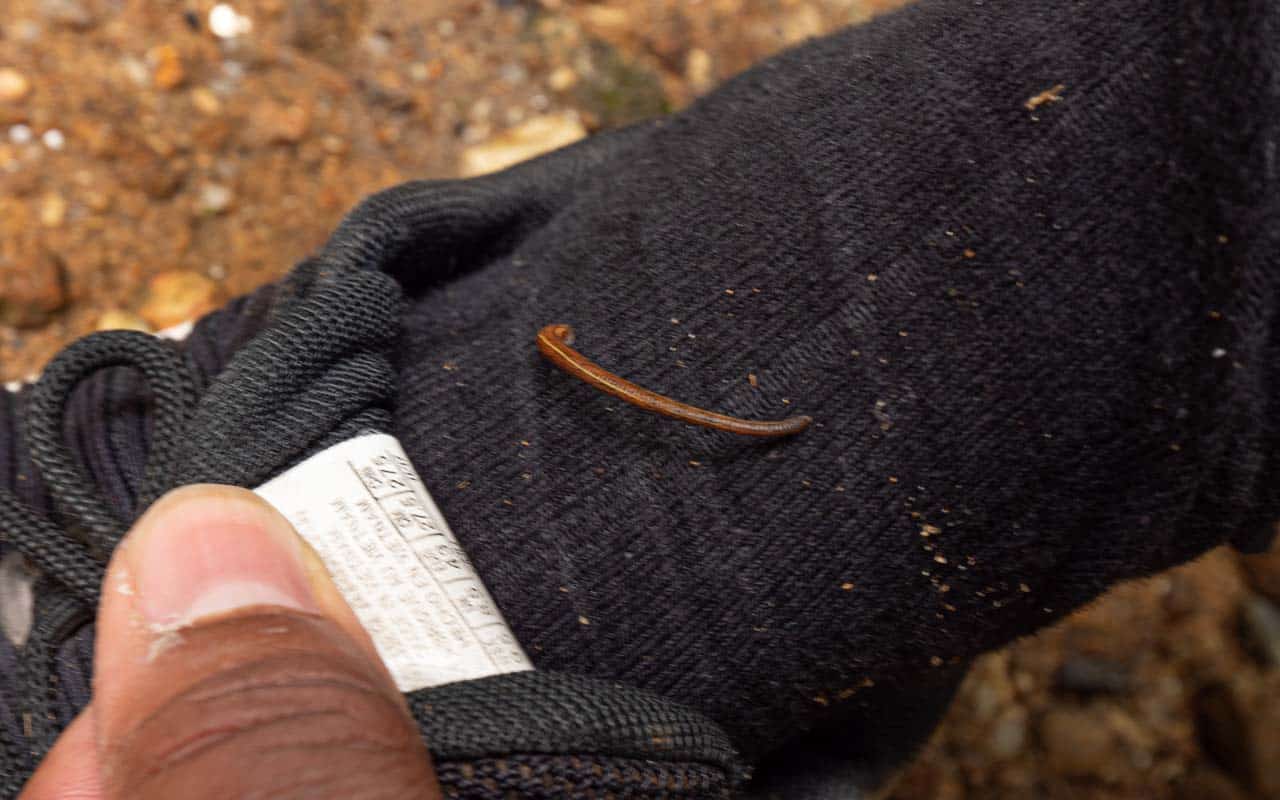 The climate in Nuwara Eliya is generally cool and with a higher chance of rainfall than the rest of Sri Lanka. This is also the reason why there are so many waterfalls in this area and why it is so intense green because of the beautiful tea fields.

The wettest months are October until December. The peak travel time is from March until May which results in higher prices. 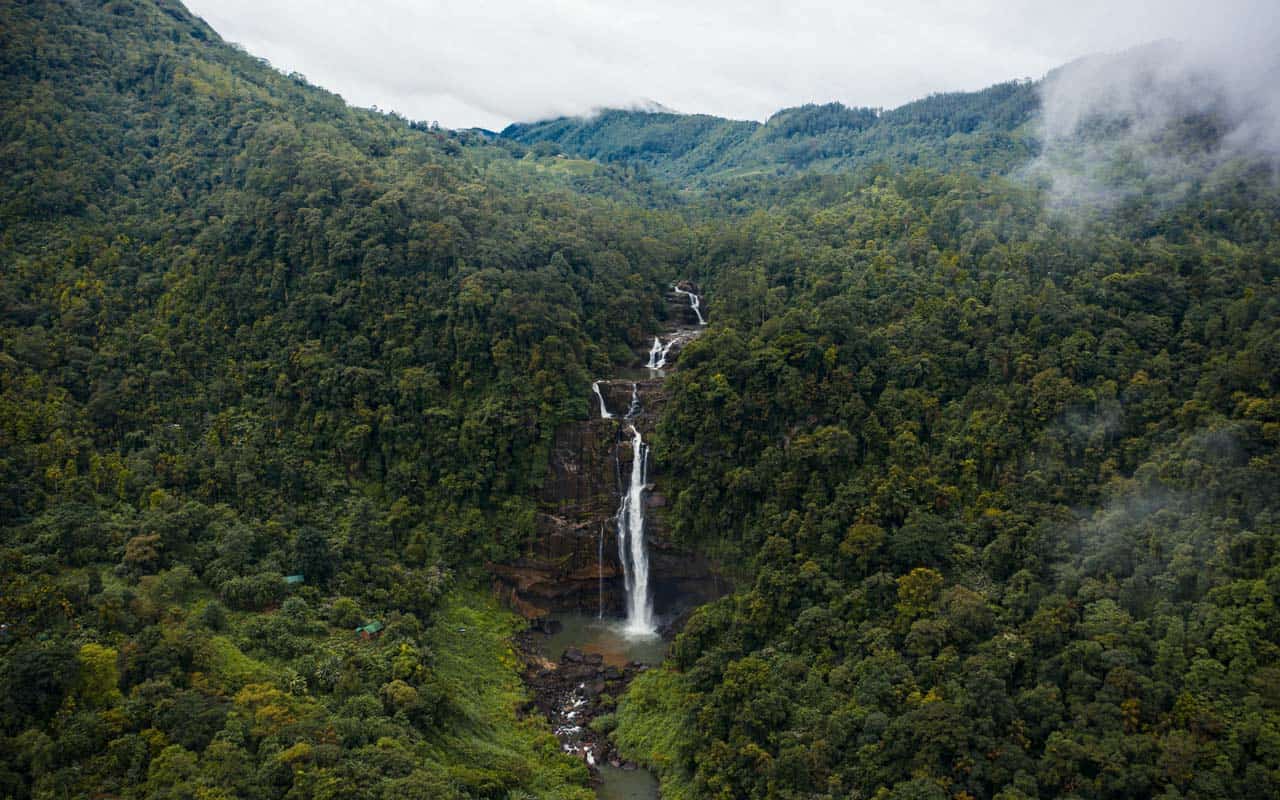 We hope you enjoyed this complete guide about the Aberdeen falls in Sri Lanka.

Nuwara Eliya things to do